A song is a great way to convey words through music. A wonderful symbiosis is able to form the desired mood or load the listener with a lot of information. And sometimes this takes longer than the standard 2-3 minutes. True, some writers try to remain as laconic as possible. Napalm Death even created a song that was only 1.316 seconds long. This creation deservedly got into the Guinness Book of Records. 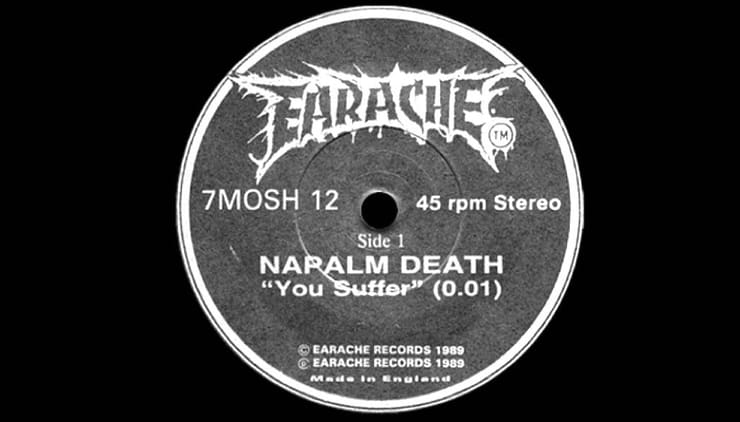 ♥ ON TOPIC: OK Go’s video for “The One Moment”, which lasted only 4 seconds, blew up the internet.

The name of the famous hit (and the song is simply doomed to fame) is You Suffer, which translates as “You are suffering”. The track appeared on the band’s debut album, Scum, in 1987. The music for the composition was written by Nicholas Bullen, and he became the author of the words together with Justin Brodrick. Both Napalm Death members created an unusual song while working on the demo “From Enslavement to Obliteration”. The musicians decided to fool around, the joke grew into an absurd creation. As a result, the musicians began performing You Suffer in front of their audiences every weekend. And the joke was a success – the song was played dozens of times! The official lyrics of the song consist of four words: “You are suffering, but why?”.

Nicholas Bullet himself said that he was inspired by the song “E” of the metal band Wehrmacht. That composition also lasted no more than a couple of seconds. Music critics consider You Suffer to be the shortest punk song in the world. And in 1989 it was released as a separate single, becoming, as expected, the shortest product of its kind. The hit inspired the Earache Records label to shoot a video for the song, but this happened already in 2007. In a couple of seconds, you can catch a glimpse of a girl jumping to the sounds of punk. At the same time, fake effects of bloody streaks and smoke from firearms are superimposed on the frames.

The joke song managed to grow into something more. Not only did she remain in the record books, but You Suffer had a significant impact on the noisecore genre, inspiring many hardcore and punk bands to create compositions in the microsong format.