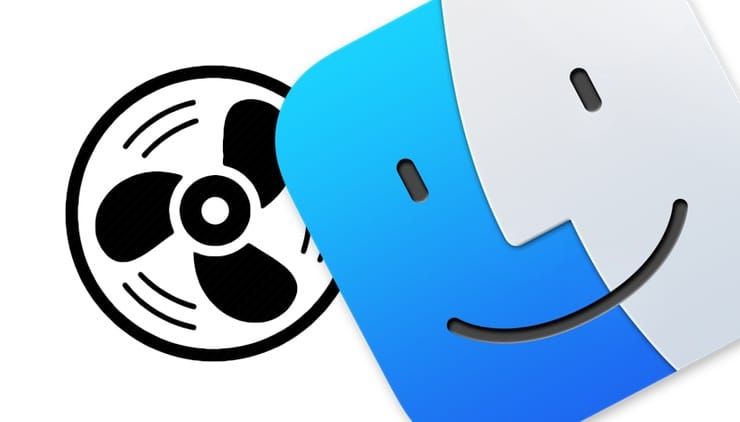 The fans inside your Mac provide the necessary airflow to cool your critical components. This process is very important, because overheating them can lead to physical damage. By default, coolers automatically start when the system as a whole heats up and stop when it cools down. Fine-tuning the behavior of the cooler in the system is not initially provided.

♥ BY THEME: How to fine-tune macOS without Terminal: 4 useful utilities.

But sometimes you realize that you start to hear the fan too often, or maybe you do not notice the fan, even though your Mac is quite hot. We’ll explain how your Mac’s active cooling system works and show you how to monitor and control your cooler speed using third-party utilities.

♥ BY THEME: Hidden files on Mac: how to hide files and folders in macOS from strangers: 3 ways.

Why is the Mac noisy? The main factors affecting the operation of fans

In day-to-day use, an application may require additional processing power to complete its task. In such cases, the computer fans will spin more and make some noise. But when your system is not loaded with resource-intensive tasks, and the fan is still actively running, this is an alarming signal.

Here are some factors that can affect how your Mac’s fan works:

♥ BY THEME: Calculator on Mac: how to view the history of calculations.

Why use an app to monitor and control fan speed on Mac?

Like most computer manufacturers, Apple doesn’t let you directly control the fan. But a third party utility will help in the following situations:

♥ BY THEME: Hotkeys for macOS everyone should know.

When your Mac heats up, it starts to slow down the processor until its temperature returns to normal. Mac may start to run slower, but there is nothing to worry about. You can artificially increase the fan speed to further reduce CPU heat, but the fan noise will also increase.

If you are uncomfortable with this noise, you can manually reduce the fan speed. When you do this, your Mac may start to heat up, which can lead to system instability. In any case, you must constantly monitor the temperature of the components so that your actions do not cause irreversible damage to the computer.

♥ BY THEME: How to automatically empty the Trash on Mac (macOS).

Many third-party utilities in the App Store allow you to monitor component health, check hard drive temperature using SMART technology, and view general system health. We will only cover applications that have special features for monitoring and controlling fan speed.

Macs Fan Control is a utility that allows you to control fan speed and temperature sensors. Immediately after starting the program, you will be able to see the current fan speed. Although you will need a helper utility to control the fan speed, the program’s interface is intuitive and easy to navigate.

The left panel shows the fans in the system and their speed in RPM (revolutions per minute). Meanwhile, the right pane displays the temperature of the thermal sensor on each CPU and GPU. Press the button to control the fan. Other next to the fan and select how you want to control it. 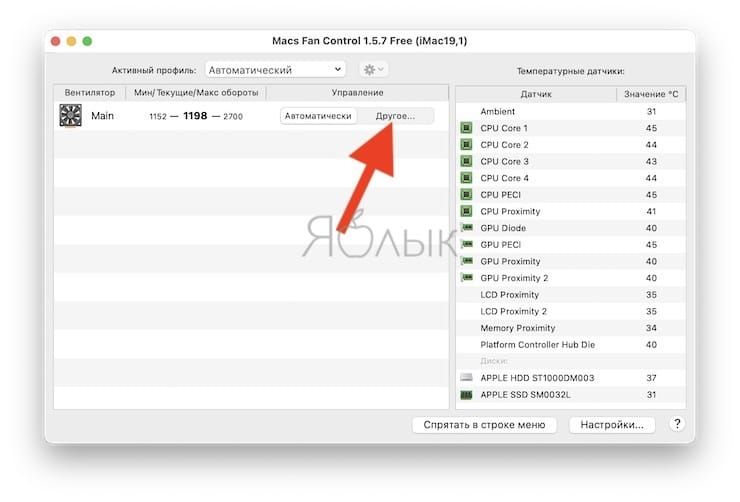 Parameter Constant RPM allows you to manually set the speed value. In this case, the fan will rotate at a given speed regardless of the temperature and sensor values. 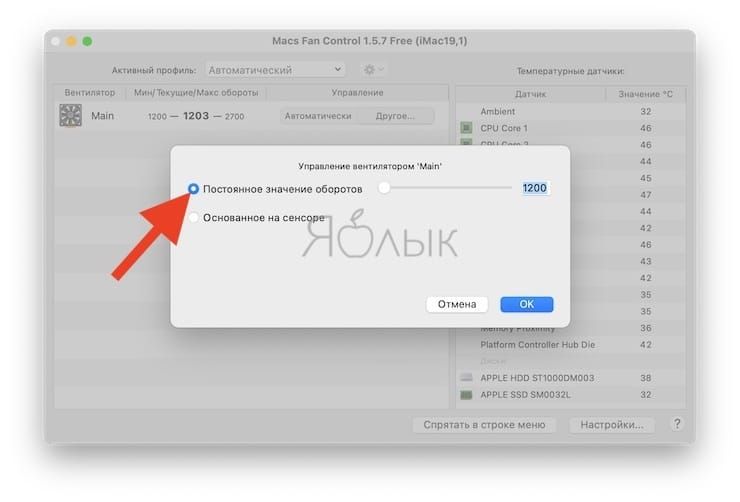 Option Sensor based you can select a sensor and define the temperature at which the fan speed will start to increase. 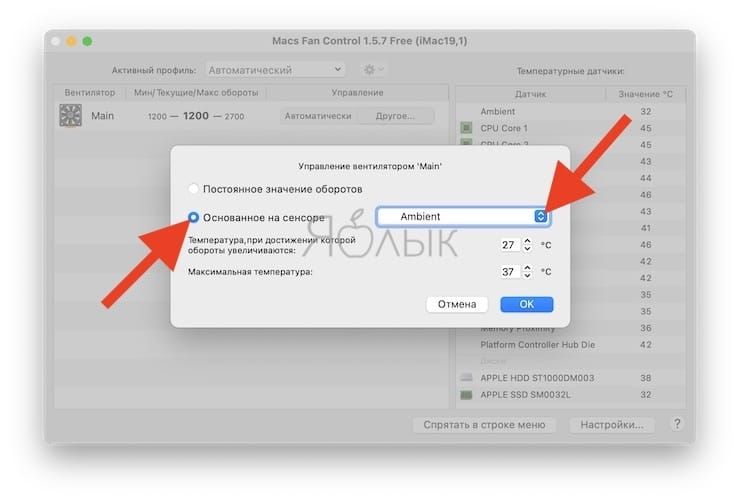 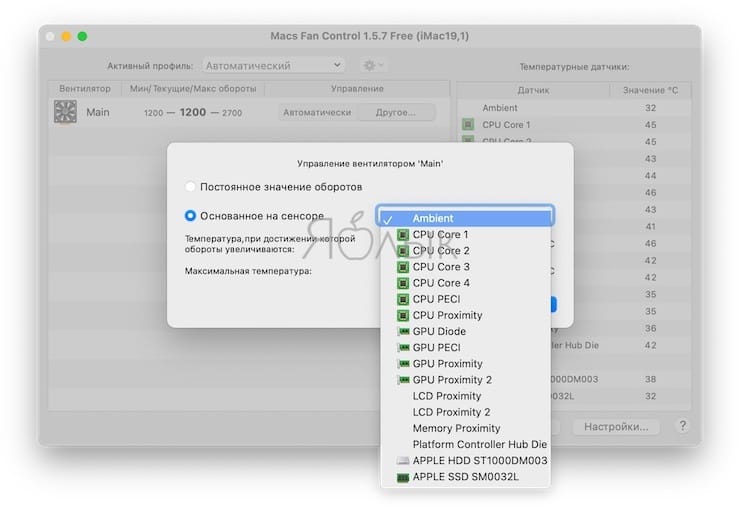 If the CPU temperature is high (over 80 or 90 degrees Celsius) and the fans can’t handle it, then you have a hardware problem. The main features of the app are free, but the Pro version allows you to set your own fan presets. 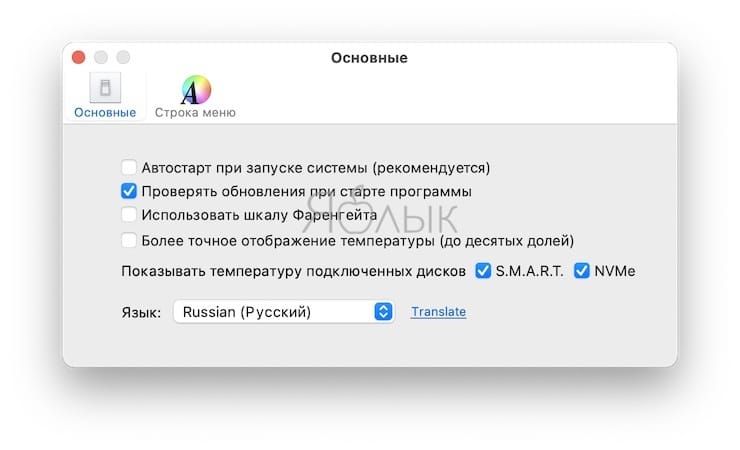 TG Pro is another utility that allows you to quickly view the temperature of your CPU, GPU, and hard drive, as well as check battery status and other hardware parameters. You can also monitor and control fan speed, run diagnostics, and generate a complete report on the fan performance you have. 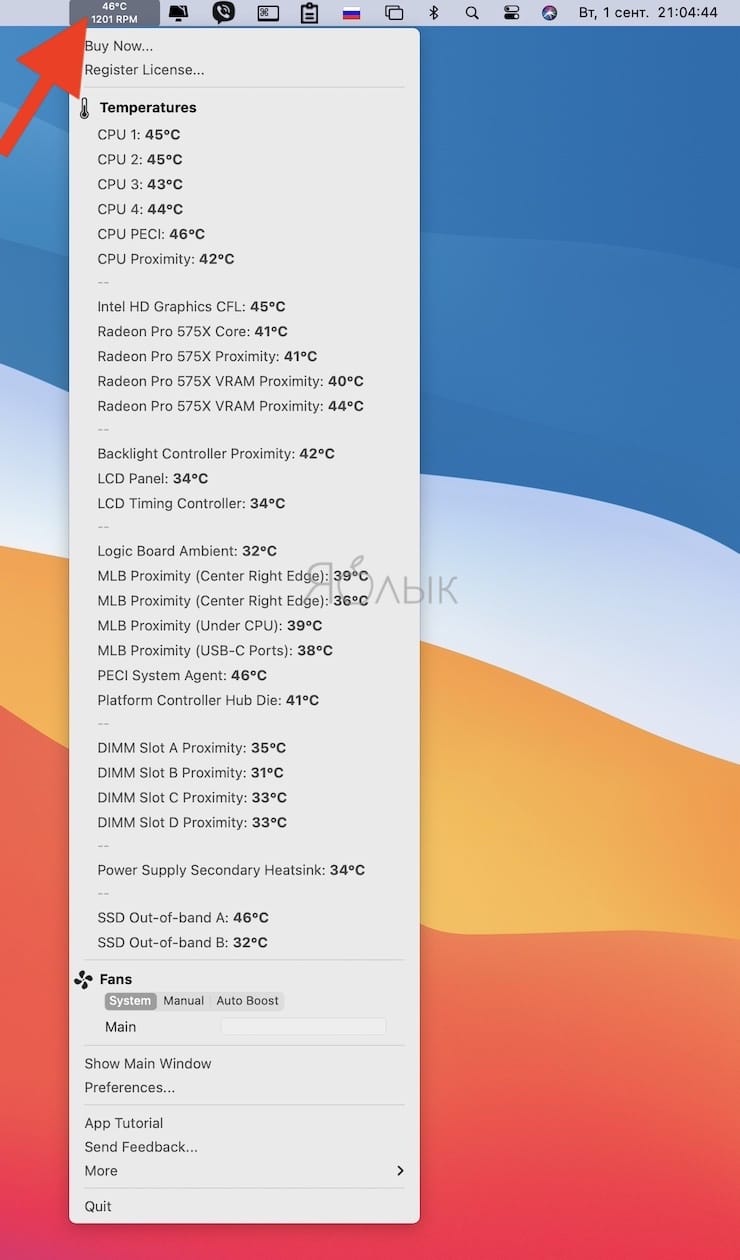 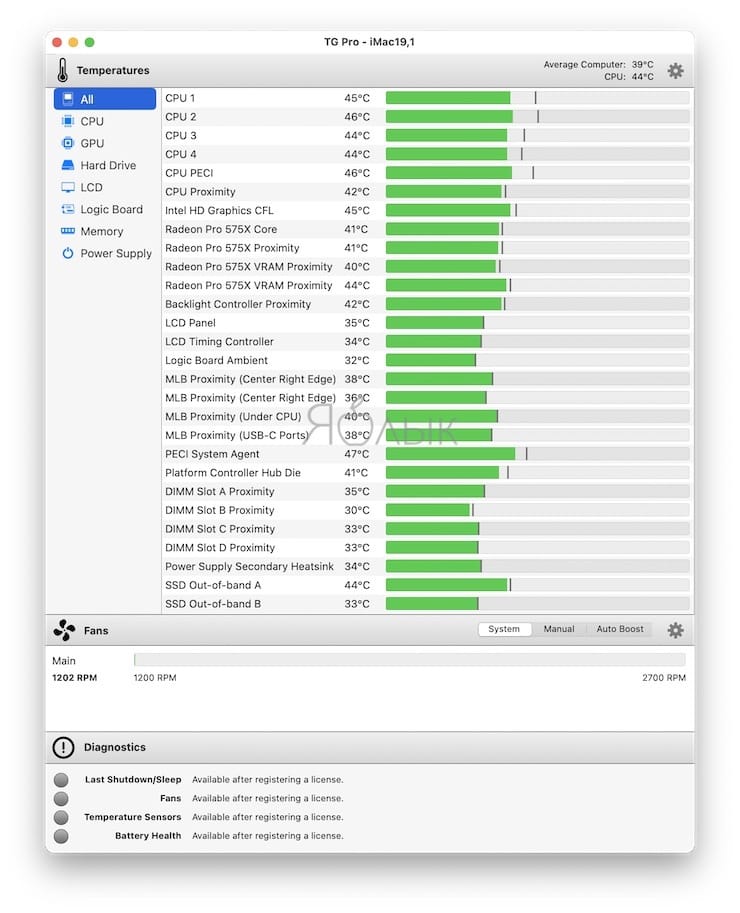 At the bottom is the diagnostics area, where you can get valuable information about the last shutdown, the status of the fans and the status of the battery. If there is an unresolved problem, you can use the Help button to learn how to troubleshoot the fan. 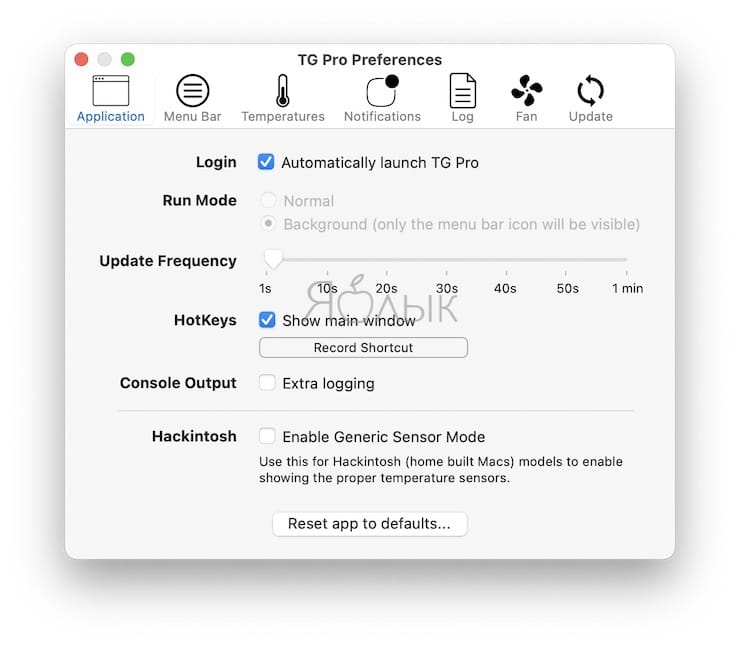 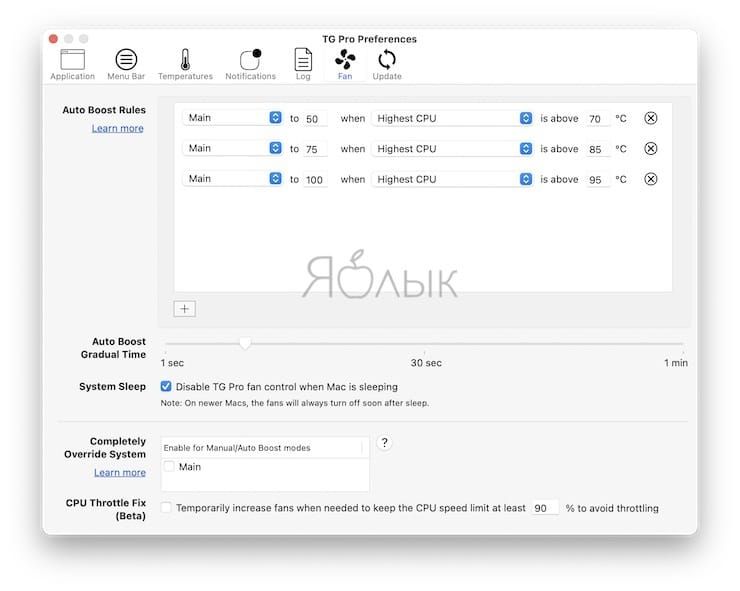 ♥ BY THEME: Hot corners on macOS: what they are, how to set up and use.

The factory firmware in the Mac is able to control the fans as the temperature changes. The applications mentioned here will help you better analyze system temperature conditions. But even having received a bonus in the form of diagnostics, You should adjust the operation of the fans yourself as a last resort… Use this only when you are confident in your actions and other methods have proved useless.

In addition to fans, other components in your Mac can give alarms even before a serious problem arises. It is worth examining these signs and spotting troubles before they become critical. 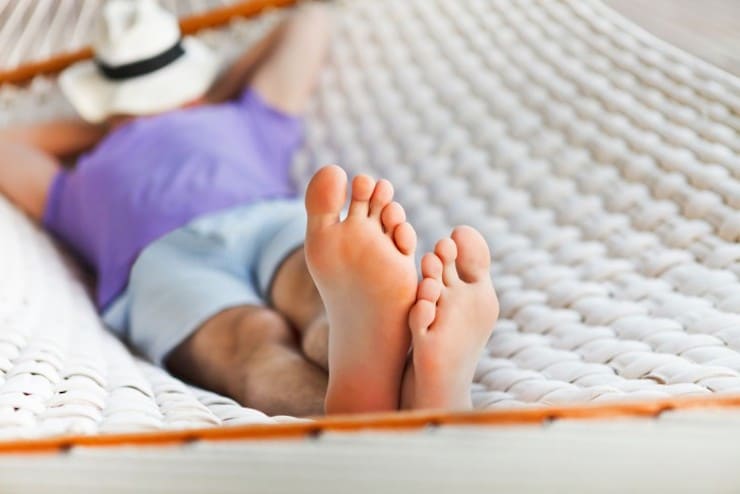 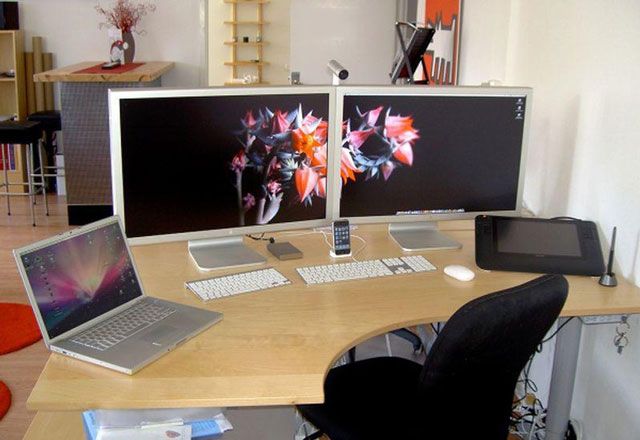 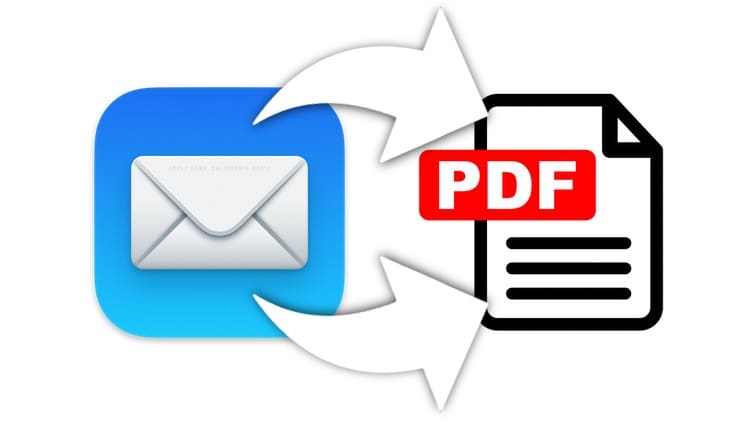 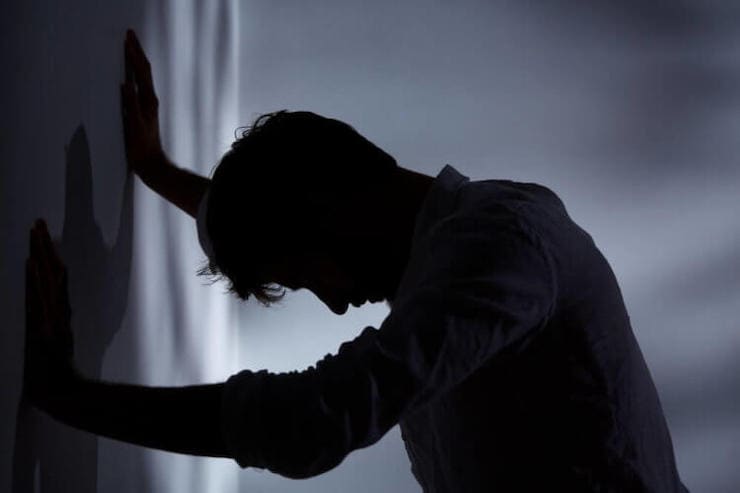 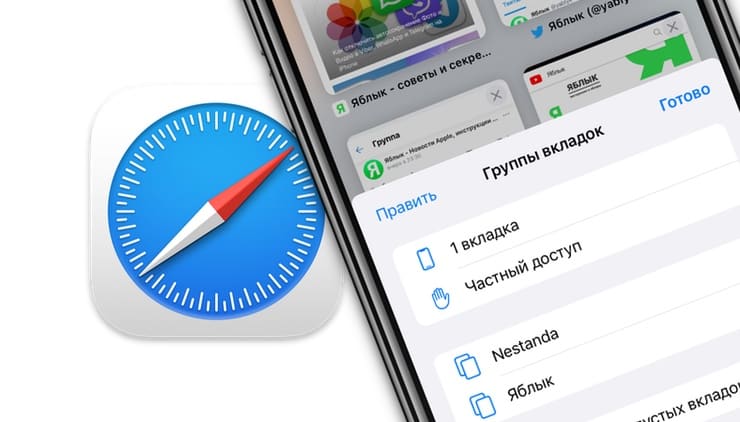 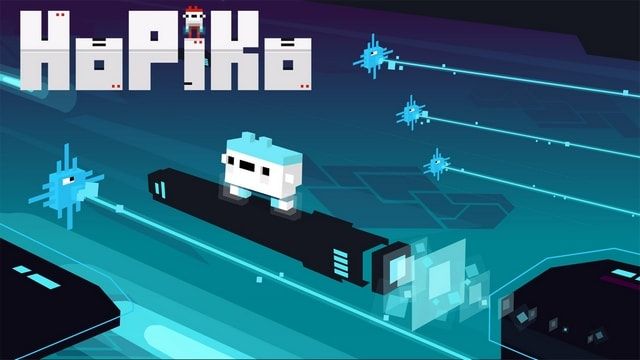 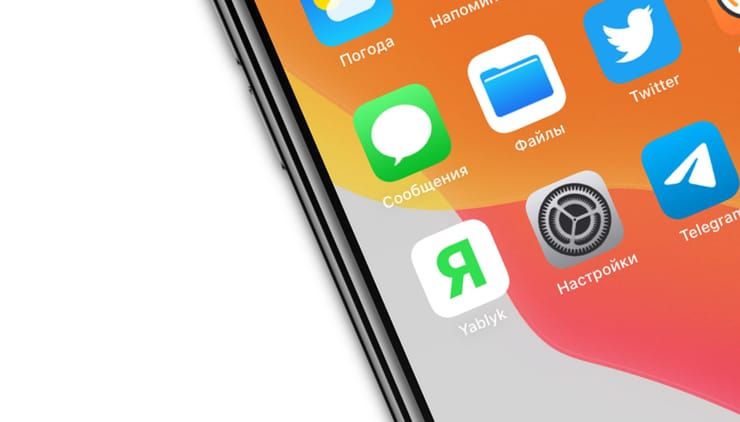