Many people underestimate the capabilities of bumblebees. But these insects, relatives of bees, in addition to collecting flower nectar and pollinating plants, can also produce honey. Moreover, bumblebees are not so demanding on heat, but fly out of the hive even earlier than their more revered brethren. Isn’t it strange that no one is engaged in breeding hardworking bumblebees for the sake of collecting honey. That is why we will tell you a little about bumblebees, as well as their differences from bees.

♥ BY THEME: What mushrooms are not wormy?

In the spring, when the air has not yet warmed up properly, the bees are not visible in the field of view. But bumblebees actively fly from one blossoming flower to another, trying to find valuable nectar for themselves. The reason for such different weather requirements is the ability of bumblebees to maintain their body temperature at 40 degrees Celsius, which bees are deprived of. This unique feature allowed bumblebees to live even in the northern lands, where heat-loving bees, in principle, cannot live.

There are 300 species of bumblebees in total; they live in different parts of the planet. The differences between the species lie in the size of the individuals and in their color. The bumblebees themselves belong to the family of “real bees”, so different types of bees are their relatives. Biological relationship determines a similar body structure of insects and lifestyle. In fact, the bumblebee is an older fluffy bee that survived the Ice Age.

Bumblebees also prefer to live in a community, but their families are small and number 100-200 individuals. The bombidarium acts as a dwelling, which is often arranged in the ground – under fallen leaves or even in an abandoned animal burrow. 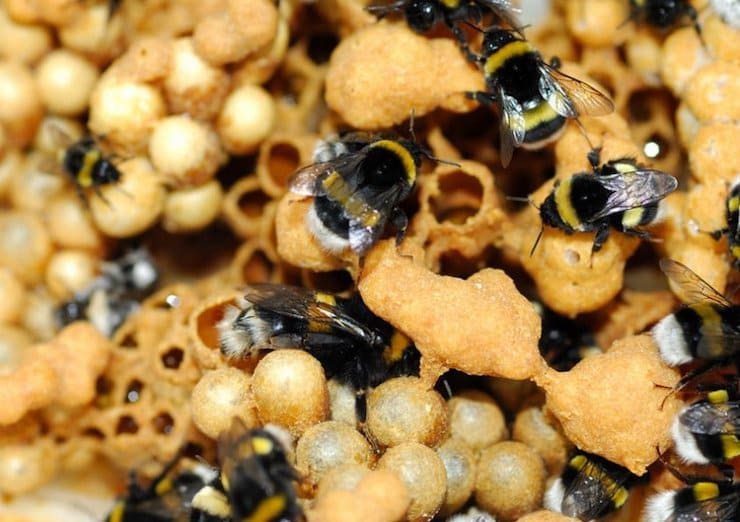 Like a bee hive, in bumblebees, each individual has its place in the hierarchy. The female dominates the family. She never leaves the nest and is exclusively engaged in laying eggs – procreation. And the most numerous part of the family is working females. They harvest and also convert the collected nectar into honey. And the hard work of bumblebees can be envied – a working female can pollinate up to 30 flowers in a minute, while a bee can pollinate 10-12 flowers during the same time. There is also such a large group in the family as bumblebees and drones. They are not idlers at all, their functions are caring for larvae and building honeycombs. The proboscis of bumblebees is elongated, which allows them to collect nectar from flowers that are ignored by bees.

True, bumblebees live less than bees – with the arrival of autumn, most of the family dies. Only young fertilized females remain to live, they endure the winter in burrows or in the grass, and in the spring they get out to freedom in search of a new home. There they lay their eggs, giving birth to a new family of bumblebees. During wintering, females are in a state of hibernation, so they do not need honey for food at all. And the nectar collected in summer is intended for feeding the larvae and feeding the adult members of the bumblebee family. In bees, the situation is different – the bulk of individuals can live for several years. And a large family, numbering thousands of insects, prepares a large amount of honey for the winter. And although the bees also hibernate, but not immediately – from the moment of the onset of cold weather, as well as early spring, when there is still a little nectar, insects need nutritious food. That is why honey is stored in the hives, and people use this behavior of bees for the sake of obtaining a tasty and healthy mass.

♥ BY THEME: What happens if venomous snakes bite each other?

What kind of honey do bumblebees have?

And although bumblebees, like bees, also collect pollen from plants, the output of honey is different. In bumblebees, it is more liquid and resembles sugar syrup. It is pumped out of the honeycomb with a pipette. This honey lacks sweetness and aroma, unlike concentrated bee honey. But bumblebee honey has more flavors, because nectar is collected from all flowers in the area. An admixture of pollen from the body of a bumblebee gives tart notes. The uncomplicated fermentation of honey only enhances this sensation. But the flavors are also unpredictable. If bees live next to buckwheat, then you can easily predict what kind of honey will be. Bumblebees will still collect nectar from all flowers in a row. This honey recipe can be called primitive, more simplified. Bumblebee honey is more popular with men than women and children.

But bumblebee honey contains more protein and various minerals, as well as water content. As a result, this mass does not tolerate long-term storage. Bumblebee honey can only be kept at temperatures up to 8 degrees, it is better generally in the range of 1-2 degrees Celsius. At temperatures above 8 degrees, honey begins to ferment, so you can easily make intoxicated mead from it. In general, this product is not more valuable than a bee analogue, having approximately the same effect on the human body.

But some beekeepers are engaged in collecting bumblebee honey, however, this is achieved with great difficulty. Special houses for bumblebees are installed on the plots, where wild insects settle for the summer. But the family will not give a lot of honey, because harvesting is not carried out for the winter – at best, it will be possible to get a few glasses of nutrient mass. And the behavior of bumblebees can hardly be called predictable, they can simply leave their house for reasons incomprehensible to humans. All these factors make it impossible to breed bumblebees in large quantities for the sake of honey extraction. Only enthusiasts are engaged in this.