If earlier photography was the lot of the elite – the technique was expensive, and the process of developing films was complex and painstaking, today numerous gadgets have learned how to take pictures. And our smartphone, with which we part, it seems, only for the time of sleep, turned out to be an excellent camera. But, photographing numerous relatives and friends, you can find an unpleasant effect in the pictures – red eyes. It is not entirely clear why this happens and how such an optical artifact can be avoided. 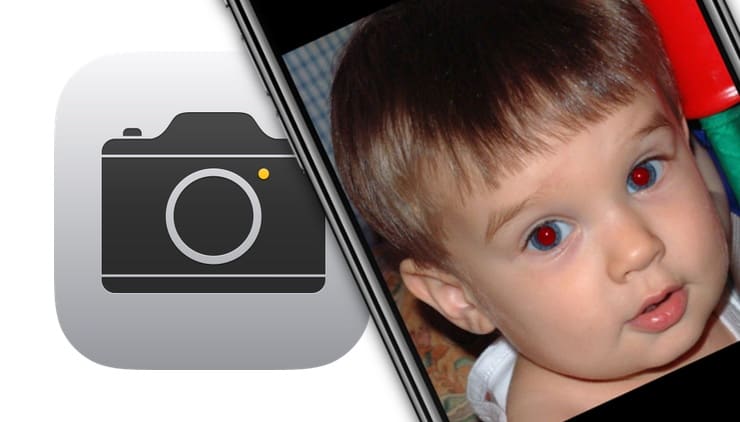 ♥ ON TOPIC: How to automatically improve photo quality on iPhone and iPad.

Why do red eyes appear in the photo when shooting with a flash?

The appearance of red circles right in the photograph on the pupil of a person is understandable.

When we take a picture in low light conditions or at night, the flash is activated. The camera captures the reflection of its light from the bottom of the human eye, which are the choroid and the retina with its blood vessels.

To understand what is happening, you need to remember the principle of the human eye. First, light hits the cornea, passing through it and then through the pupil. Then the rays are focused by the lens and directed to the retina. This inner lining of the eye has photoreceptor cells, which are precisely responsible for the perception of light by us, converting the visible part of its spectrum into nerve impulses. With the help of the optic nerves, they enter the brain, which collects signals together and forms a whole picture from them. In fact, the principle of our eyes is not much different from the operation of a camera. There, the role of transparent structures of the eye is played by a transparent lens. And the control of the transmitted light is not the pupil, but the diaphragm. The sensitive element (film) is engaged in fixing the image, while in the human organ this function is given to the retina. 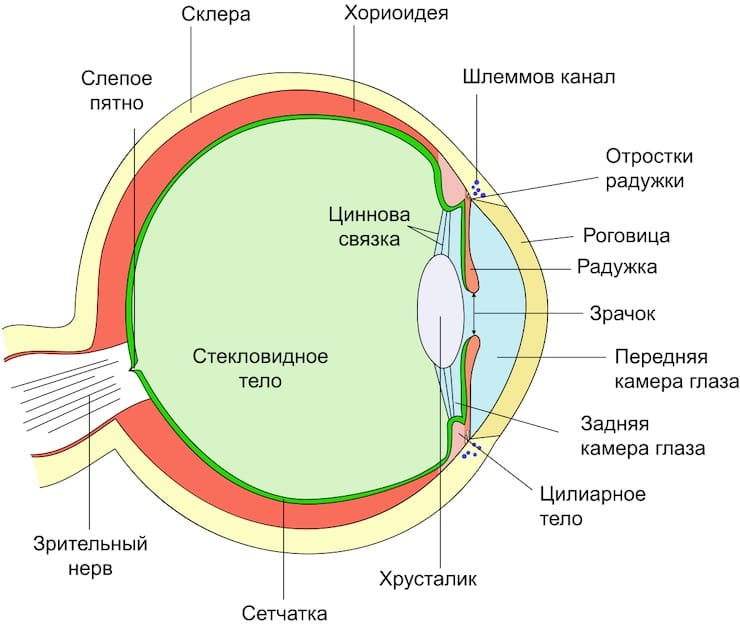 If there is poor lighting in the room, the pupil begins to dilate to capture more light. At the moment the camera flashes, the pupil naturally narrows – there is a lot of light. But our eye simply does not have time to fully and quickly respond to what is happening. This leads to the fact that too much light enters the fundus, which is reflected from the retina and its vessels. The lens, an essentially biconvex lens, captures these reflected rays, preventing them from scattering throughout the eye. This leads to the color of the pupil and its iris in a rich red color, but the color of the proteins usually remains the same. It is this reflection that the photograph captures. The red color is easy to explain – the light comes from the blood vessels of the fundus. We know that the reflected rays form the color of the object. And since the fundus reflects rays in the red range, then this is exactly what the camera matrix captures. 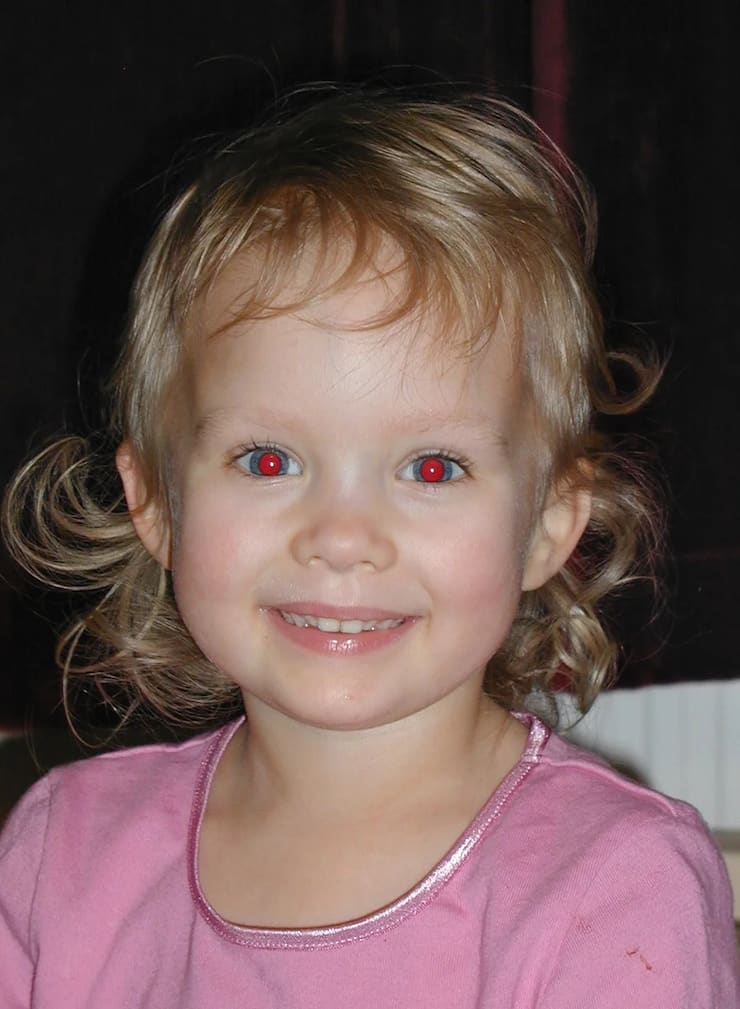 The saturation of the red color of the pupils can be different, it depends on the size of the pupil and the genetic characteristics of the lens. The wider the pupil opens when the flash fires, the more red-eye appears in photographs. This is especially evident in the pictures of children. The fact is that at the age of 2 to 10 years in a person, the pupil size is 4-5 mm. Later, up to 50-60 years, the pupil size is already 3-4 mm. In old age, in humans, the pupil further reduces its diameter, up to 1-1.5 mm. Moreover, with age, for a number of reasons, the shape of the lens also changes, and hence its refractive ability.

The intensity of the color of the fundus also plays a role. It is influenced by the content of the coloring pigment in the retina and in the vascular membrane. These parameters are individual for each person. That is why the effect manifests itself in different ways in different people – in some it is a red speck, while in others the entire pupil is intensely stained. This effect works best when shooting in the darkest environments. If a person is photographed even with a flash in a well-lit place, then the pupil itself is constricted, less light enters the eye and the unwanted effect is almost not manifested.

♥ ON TOPIC: Why does an iPhone have 3 cameras: what is each one for and how to switch?

How to take photos without red eye?

Now that we know why red eyes appear in photographs, it is helpful to use this information to eliminate or avoid the effect. Here are some practical tips to give:

See also  Camera sound in iPhone: how to enable or disable when taking a photo 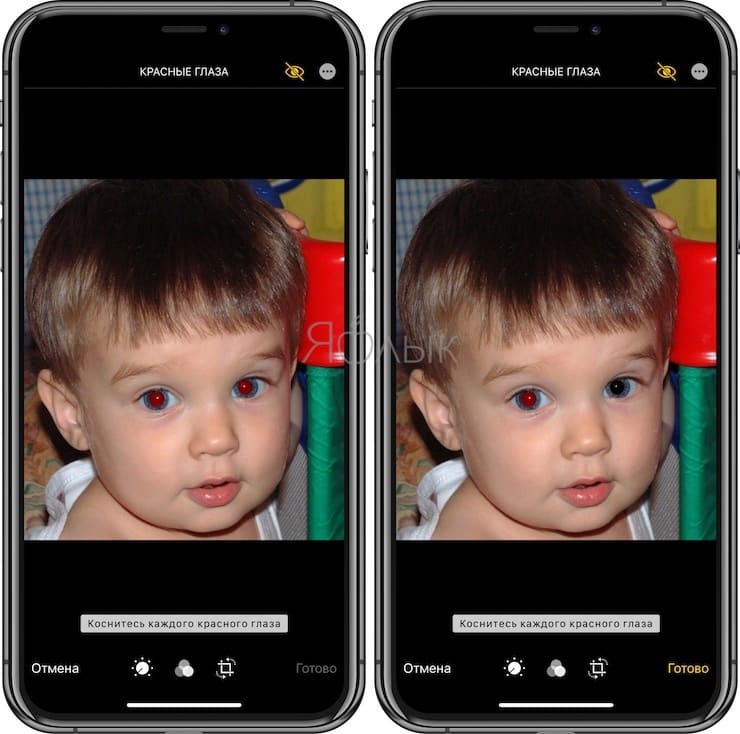 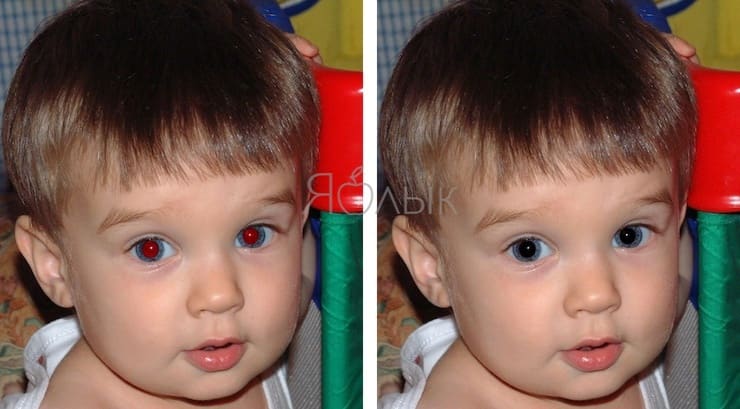 For amateur photographers, red eyes can be an unpleasant surprise. This effect inevitably raises a number of questions, even if one understands its essence.

Why don’t all people have red eyes in group shots? There can be several explanations for this effect. But the simplest thing seems to be that just not all people were looking directly into the camera, so they didn’t have red eyes. This option is also possible – the person being filmed may be in a state of alcoholic intoxication, which slows down his reaction. The pupils do not react to the flash as quickly as in the normal state. As a result, the red-eye effect is especially pronounced.

Why is only one eye red in the photo? This situation is possible if only one eye was looking directly into the camera lens, while the other was looking at the device from a different angle. This made it impossible to catch the light reflected from the retina. There are rare cases when the appearance of one red eye in the image is associated with the presence of a cataract or tumor in the other eye. Constant observation of such an effect in the picture may be the reason for contacting an ophthalmologist. 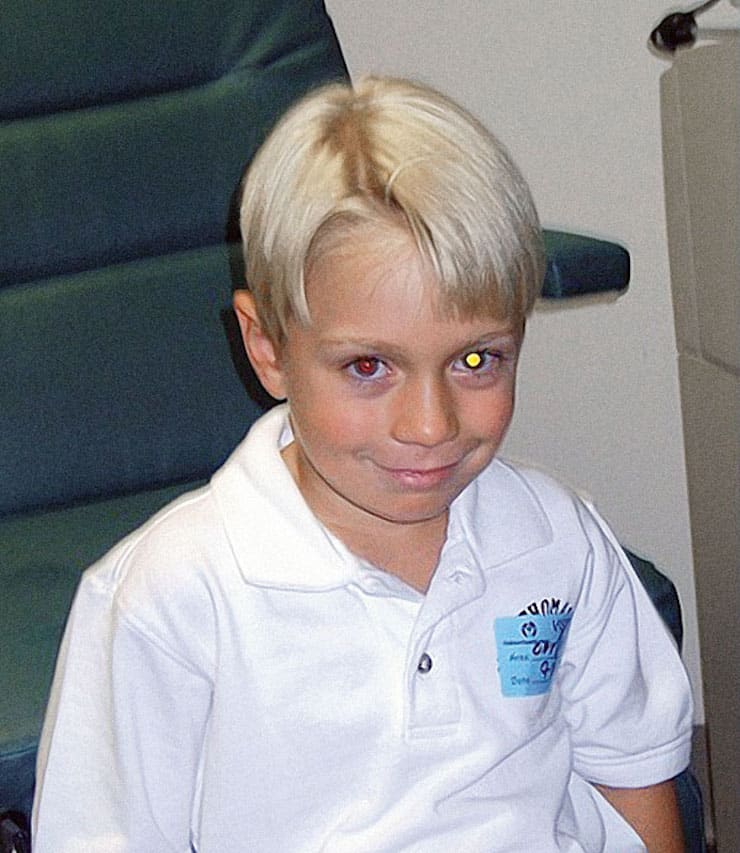 If the person in every photo has red eyes, is this evidence of a health problem? You shouldn’t worry ahead of time. Most likely, he just chooses the same pose, looking directly into the camera. The phenomenon already described by us occurs, which gives rise to red eyes in the picture. It may be advisable to look away from the lens, focusing on illuminated objects or surfaces. This will help narrow the pupils and reduce the likelihood of an effect. Some people naturally have a larger pupil than others. Consequently, it increases the likelihood of red-eye appearing when shooting. But in smokers and alcohol abusers, the pupils become smaller. It is known that they can expand when the thyroid gland is overactive, and narrow when there is a lack of thyroid hormones. There are other health-related changes in the pupil. Its sharp narrowing is caused by increased intracranial pressure or inflammation of the meninges. In advanced stages, the pupils, on the contrary, dilate greatly. A change in the color of the pupil of only one eye may indicate inflammation of the corresponding half of the brain. There is another reason for the appearance of red eyes in photographs – the low content of melanin. It is known that people with light eyes are more likely to appear in photographs with red eyes.

Is it normal for a baby to appear in photographs with red eyes? This is a common occurrence for children. It indicates that the retina is healthy and healthy. And in childhood, the effect manifests itself more often than in adults. But the appearance of only one red eye can tell about the presence of strabismus in a child. One or both eyes deviate on direct gaze. If the child’s red eyes do not appear in the picture, this may also indicate a certain disease. If the anomalies in the child’s photographs are repeated often, it is worth contacting an ophthalmologist.

Why can eyes look different in pictures of animals? Indeed, when photographing animals: horses, dogs, cats, etc. their eyes in the photo can get different shades. The fact is that many creatures have a specific layer in the retina that provides visibility in low light conditions and even in complete darkness. Reflection of light from this surface can cause the eyes to appear yellow, blue, green, or white. It all depends on the angle of reflection of the flash unit. And in some animals, you don’t need to use a camera to observe such an effect – the eyes already glow in the dark, reflecting even a weak light. There are animals that prefer a daytime lifestyle, as well as some breeds of cats and dogs that do not have such a layer in the eye. Then the red-eye effect appears, just like in humans.