The Mac is impossible to kill – at least programmatically. Believe me, I checked, and more than once. No matter how hard I try to spoil the system “useful” tweaks and regular cleaning, always managed to restore it.

Hidden in the system a whole range of service features, which provide an opportunity, including, to revive it. To activate them, you need keyboard shortcuts that are used at boot time. Here are the ten most useful. 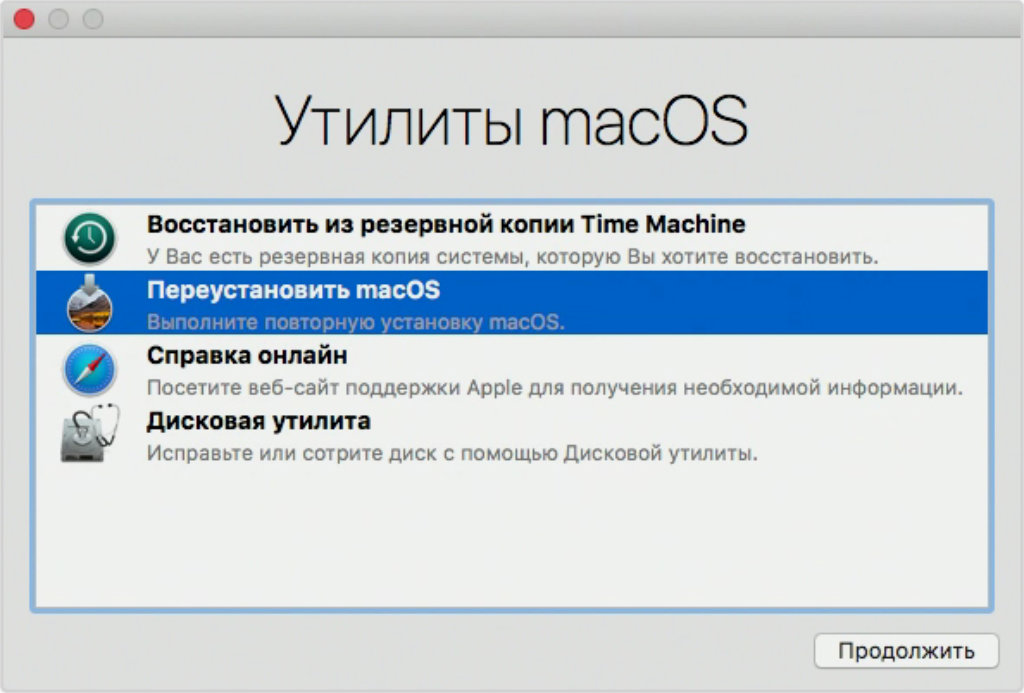 In macOS recovery mode, you can use a set of special utilities to help reanimate it.

From here you can restore the system from backup, reinstall current macOS version and download the latest available build or the one that was used by default, get help, or use the disk utility for formatting.

From here, you can use the “Terminal” if you have any necessary commands for it.

When starting the recovery mode, you may need to enter the password for the computer administrator account or Apple ID. What to do: hold down the Option (⌥) key while starting the operating system.

If you use several disks with different versions of the operating system, using this utility you will be able to select the one you need to boot.

The manager works similarly to the menu System Preferences> Boot Disk, but it turns on before the operating system starts.

What to do: hold Command (⌘) + Option (⌥) + “P” + “R” immediately after turning on or restarting the computer.

Here is an explanation of these types of memory from Apple:

“NVRAM (non-volatile RAM) is a small memory chip that stores certain settings for quick access on a Mac. The PRAM (parametric RAM) stores the same information. ”

This may include sound settings, Mac display resolution, default boot volume, time zone, and so on. If the computer presumably does not start due to any of these parameters, you can reset them.

The most common problems are with the boot volume. You can select an external drive by default, and then disconnect it and get an error.

4. Starting the system in safe mode What to do: hold down the shift key (⇧) while starting up the operating system.

During startup in safe mode, the operating system disables all user fonts and deletes their caches, stops the automatic opening of applications, loads a limited number of kernel extensions.

In addition, the boot disk is also checked for errors by default. If they are detected, the system will try to fix them.

Safe mode helps turn on the Mac, which does not start due to the abundance of third-party software and other content of unknown origin.

See also  How do I turn off site notifications in Chrome?

5. Activation of the functional test of equipment A functional test of the equipment takes a couple of minutes. It checks the health of computer components and connected Apple devices. If he finds problems, he immediately suggests ways to solve them.

If you can fix the problems yourself, do it and try the test again.

Using this test, you can, as an option, identify problems with cooling the computer due to the abundance of dust inside it.

6. Starting the computer from the network boot volume

Apple has refused to use network boot volumes on current Macs, and its features on older models can be found here. What to do: hold down the Command (⌘) + “S” key combination during operating system startup.

This mode is for users who are familiar with the UNIX command line. It will help you identify problems that are related to Mac startup.

8. Turning on the computer in external disk mode What to do: hold down the “T” key while the computer is starting up.

Any Mac can be used in hard drive mode with another Apple computer. To do this, they need to be connected via Thunderbolt 3, USB-C, Thunderbolt 2 or FireWire, and then activate the corresponding mode.

This feature is conveniently used to access Mac data with a damaged display.

The only thing is, if FileVault is enabled on the computer that will become external storage, you will have to enter a password to remove protection.

What to do: Hold Command (⌘) + “S” immediately after turning on or restarting the computer.

Another mode that is designed for connoisseurs of the UNIX command line. It will show all the processes that occur during computer startup and help identify problems. What to do: use the Eject (⏏), F12, mouse or trackpad buttons during system boot.

This command is needed in order to remove optical and other disks during computer startup.

I wonder how many readers we still use. Be sure to note in the comments.