Modification S20 Ultra leave out comparison, on paper it is an unprecedented flagship. In fact, we compare the model with iPhones already in a real test.

▸ The screen in the Galaxy S20 has increased (6.2 ″ and 6.7 ″) and has become noticeably different from the iPhone line. The main distinguishing feature of the display is the support for the refresh rate 120 Hz.

▸ Dimensions of models are already habitually more elegant than those of competitors. Smartphones that grow every year are almost impossible to control with one hand.

▸ The filling got a minor update, it makes no sense to compare the performance in different operating systems. The flagship, as always, will work fine for several years without lags and brakes.

▸ Cameras have become the main update of the Galaxy S20 line. The triple module by all parameters bypasses the cameras in the iPhone. On the other hand, 8K video and 64-megapixel photos seem clearly redundant.

▸ The price tag on the model differs markedly in favor of Samsung gadgets, which for many will be a decisive factor.

Now consider in detail all the differences. IN iPhone 11 Pro installed Super Retina XDR display, which is made on OLED technology and has a diagonal of 5.8 inches. Resolution is 2436 × 1125 pixels, which gives a density indicator of 458 pixels per inch.

IN iPhone 11 Pro Max only the diagonal and resolution differ. The parameters are 6.5 inches and 2688 × 1242 pixels, respectively. 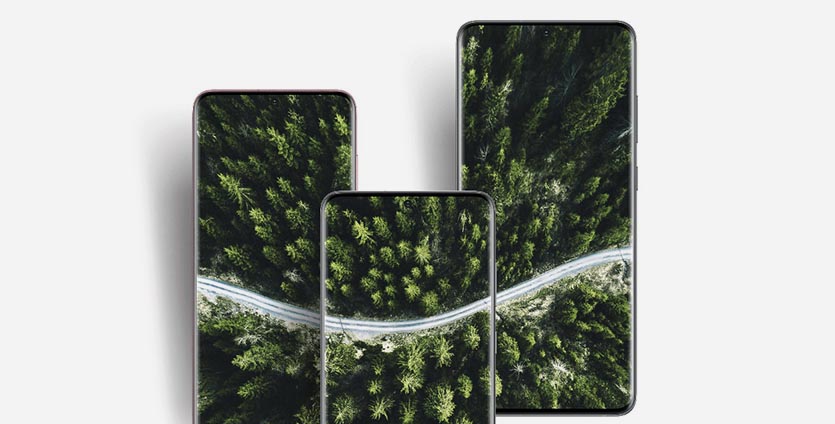 Larger model Galaxy S20 + equipped with an enlarged display up to 6.7 inches, but with the same resolution Quad HD +. This slightly reduces the ppi to 525.

Both matrices claimed support for HDR10 +. The technology differs from the usual HDR10, which is in the iPhone, the presence of dynamic metadata. In fact, this requires special content, at the moment even regular HDR is a rarity. Both technologies will be better visible on modern TVs than on small screens of smartphones.

The more significant difference between the Galaxy S20 is the maximum screen refresh rate. When lowering the resolution to FullHD +, you can turn on the 120 Hz parameter. At Apple, this technology is only available on the 2018 iPad Pro. We are waiting for such a chip in the iPhone 12.

So far, only real tests can show the difference in perception of 120 Hz on the smartphone screen and the autonomy of the gadget in this mode of operation. There were also last year’s differences between Samsung flagships and Apple smartphones: the front camera module built into the display instead of the big bang on the iPhone and the ultrasonic fingerprint scanner located under the matrix, which has not changed much over the year. Only minor programmatic improvements in the module are announced.

The rounding of the side edges of the screen familiar to the Galaxy line has not gone away.

Who has a better screen: on paper, Samsung’s advantage is obvious. In fact, you will have to wait for the first reviews of the matrix in 120 Hz mode.

In addition to this innovation, do not forget about the useful feature Always on display, an analogue of which is still not in the arsenal of Apple.

The rounded ends of the screen in the Galaxy line for some are a small advantage, for others – an uncomfortable disadvantage. On the iPhone side, it’s a familiar convenience.

Here are the sizes of all compared models:

As you can see, Samsung devices have a more elongated body, but at the same time, thinner and lighter than their direct competitors.

The narrow horizontal block of cameras from the Galaxy S10 turned into a massive rectangle, which became very similar to his brother in the iPhone. Samsung smartphones have a proprietary narrow side frame, to which the front and back panels “flow”. Design elements are typical and recognizable for the Galaxy line.

At the start of sales, three colors will be available: blue, gray and red. For the S20 + model, a black model will appear instead of blue. On the side of the iPhone 11 Pro is a golden, “space gray”, silver and dark green color of the case.

Who has better dimensions: iPhone SE 😊. It seems that smartphone manufacturers have forgotten how convenient it was to control gadgets with one hand.

Models have comparable dimensions and there is no obvious winner. One is more familiar with Samsung’s narrow elongated case, and the other a wider iPhone. IN iPhone 11 Pro the processor is responsible for the calculations A13 bionic with 3rd generation Neural Engine. The devices with 64, 256 or 512 GB built-in memory without expandability.

According to various sources, Apple smartphones 4 to 6 GB random access memory. In the second case, 2 GB is supposedly reserved by the system for processing a large amount of data from smartphone cameras.

Battery capacity is 3190 mAh in a conventional model and 3500 mAh for model Max.

All iPhone models are equipped with a slot for one SIM card, there is support for eSim. Only modifications for the Chinese market have a dual SIM card slot, but such devices are not officially sold or serviced at service centers in the Russian Federation. Heart Galaxy S20, depending on the region of sales, will become one of the processors Snapdragon 865 or Exynos 990. For countries where the work of 5G networks is certified, the device will have an appropriate module on board.

In place is already the familiar combined slot, which allows you to use a pair of SIM cards or a SIM card and a microSD memory card up to 1 TB.

Who has a better filling: on the side of the Galaxy S20 is already the usual support for memory cards and two SIM cards. In addition, the model has a more capacious drive in the basic configuration.

It is pointless to compare the performance in synthetic tests on different software platforms. 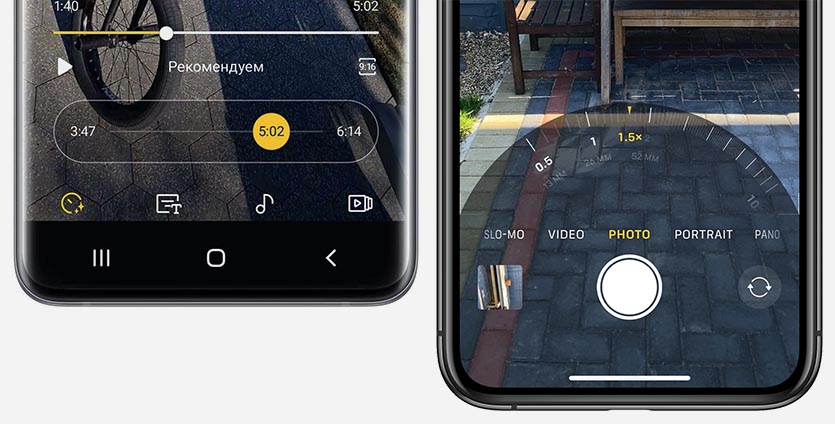 Apple smartphone can shoot video in maximum quality 4K 60 fps. When switching to 1080p, you can increase the frequency to 240 fps.

From a captured video with a resolution of 4K, you can draw 8-megapixel photos. Available 3x optical zoom and 30x digital. Thanks to the increased aperture ratio and software algorithms, the devices shoot well in low light and in the dark.

Smartphones can shoot video in maximum resolution 8K. After shooting, any frame from such a movie can be turned into a 33-megapixel photo. There is a super slow motion mode. In this case, the user will receive 960 frames per secondbut only in HD resolution.

Chip appeared Multi-shot, during its activation, the smartphone records what is happening using all cameras from 3 to 10 seconds, and then offers the user to save successful frames or videos.

Who has a better camera: the flagship camera, which appears six months later than the competitor, should initially be better. At the same time, Samsung tried to stretch some indicators into sky-high distances.

It is unlikely that even the iPhone 12 will be able to record 8K-video, 64-megapixel photos and slo-mo with 960 frames per second.

In practice, such opportunities are likely to be useless. The comparative test of cameras in everyday use cases will solve everything. On the Samsung model, pre-orders will start accepting on February 21, and the start of sales is scheduled for March 6 in the USA and Europe and March 13 in Russia.

Samsung smartphones have a more pleasant price tag, which emphasize several significant advantages. On the side of the new Galaxy S20 is a 128 GB drive in the base model, support for two SIM cards and more sophisticated cameras.

What are you for?