Apple devices are known for quality, but some models are problematic. Cupertinians do not refuse and make free replacement or repair of such gadgets.

To the point: 7 life hacks to repair Apple appliances

We have put together existing Apple repair or replacement programs that should be used soon. Some of them will end soon.

IPhone 6s or iPhone 6s Plus does not turn on A limited batch of old smartphones were produced with a small defect, which during operation led to the failure of the power controller or even the battery.

As a result, the smartphone simply stops charging, and after a full discharge does not turn on at all.

What models are involved in the program: iPhone 6s or iPhone 6s Plus, which were released during the period from October 2018 to August 2019 You can check the model by serial number on a special page on the Apple website.

What will Apple do: an authorized service center will check the smartphone for compliance with the program conditions and offer a free repair. If the iPhone will have other damage that is not covered by the warranty, you will have to pay for their repair.

Repair under this program does not extend the standard warranty on the iPhone.

If you have already repaired the defective module at your expense in an authorized service center, you can contact the company for compensation.

Multi-Touch does not work for iPhone 6 Plus After excessive pressure on the smartphone screen, the Multi-Touch may malfunction. The display then ceases to recognize a few touches and may start to flicker.

What will Apple do: the company in this case offers a paid display replacement at a recommended price 11 685 rubles.

If you have already encountered a similar problem and changed the screen at a higher cost, Apple can compensate for the difference. On some iPhone Xs, there may be problems with the touch elements in the display module. This leads to false positives on the matrix without touching the screen or to the fact that some areas of the display do not respond or do not always respond to touch.

See also  Review of the game Bring You Home for iPhone, iPad and Apple TV: an original puzzle where you need to control not characters, but levels

The problem should be manifested when using a smartphone without protective films and other accessories.

What models are involved in the program: The program applies to all iPhone X models, from the date of sale of which less than 3 years.

What will Apple do: Authorized service centers will make a free replacement of the display on problem iPhones. The term of the standard warranty will not change.

If the gadget will have other damage to the matrix, then you will have to pay for the repair. Users who have made repairs at their own expense can rely on compensation. A small number of second and third generation Apple smart watches had a manufacturing defect, as a result of which a crack may occur along the edge of the screen.

Cases when the crack looks like in the picture below are considered: What models are involved in the program:

The program extends to Apple Watch models in an aluminum case. An important condition: three years from the date of sale or a year from the start date of the program (August 30, 2019)

What will Apple do: the company will make a free display replacement. The warranty period for the device will not change. A limited number of Apple laptops overheat the battery during prolonged use, which in extreme cases is dangerous if the device ignites.

Representatives of the company strongly recommend that Wallenites of problematic models contact a service center.

What models are involved in the program: MacBook Pro Retina 15 ″ (mid 2015) sold from September 2015 to February 2017. The right to service can be checked on a special page on the Apple website using the laptop’s serial number.

What will Apple do: Authorized service representatives will replace the battery for free. If desired, you can perform additional paid maintenance of the device, for example, dusting.

Repair does not extend the warranty on the device.

Sticky Keys on a MacBook Butterfly 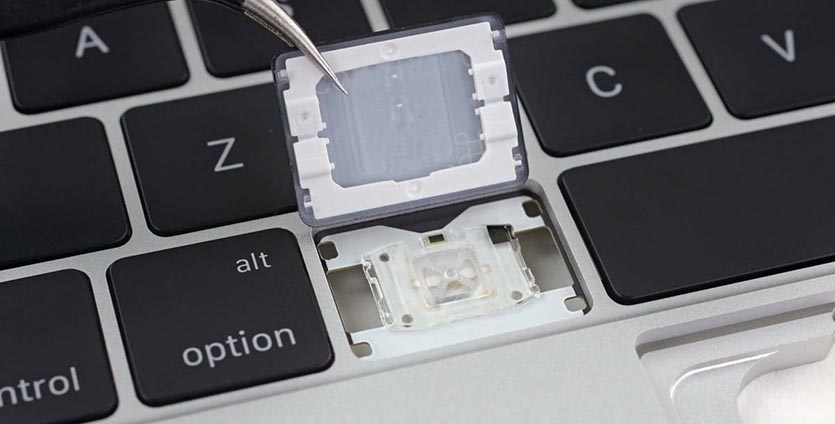 The most famous and common problem with the latest generations of Apple laptops leads to sticky keys, repeated operation of buttons or the absence of characters typed from the keyboard on the screen.

This may occur with one or more keys.

What models are involved in the program:

The program extends to the indicated models, from the moment of sales of which less 4 years.

What will Apple do: in an authorized service center, you will replace several keys or completely replace the entire keyboard. The procedure is free.

If the laptop has other damages, repairs or additional maintenance will be carried out for a fee.

Those users who made such repairs at their own expense can apply for compensation of funds.

The program does not change the term of the standard warranty on the device.

Problems with SSD in MacBook Pro 13 ″ Some 128 GB and 256 GB SSDs may not work correctly, resulting in loss of data or inoperability of the operating system.

Fortunately, the problem is not in the hardware, but in the firmware of the drive, which can and should be updated.

What models are involved in the program: The program includes MacBook Pro 13 ″ laptops with two Type-C pots and without Touch Bar, which were sold from June 2017 to June 2018

What will Apple do: SC representatives will update the firmware on SSD drives for free. You will need to back up all the data in order to restore the Mac from backup after updating the firmware.

The program does not change the duration of the standard warranty on the MacBook, and users who have made such repairs at their own expense can apply for compensation. Another problem that may arise in a 13-inch firmware. The matrix backlight completely stops working or there are bright highlights at the bottom of the screen.

A defect can be either permanent or periodic.

What models are involved in the program: the program affects the 13-inch MacBook Pro (with and without Touch Bar) 2016 release. This applies to laptops sold during the period. from October 2016 to February 2018

The program is valid for 4 years from the date of sale of the computer.

What will Apple do: employees of authorized service centers will make free matrix backlight repair. If necessary, additional repairs or maintenance will have to pay its cost.

Those who made a paid repair of the breakdown may receive compensation from Apple. The problems of 13-inch professional laptops do not end there. During prolonged use, damage to certain components may occur, leading to bloating of the built-in battery.

This can be seen by the deformation of the laptop case.

What models are involved in the program: The program includes 13-inch MacBook Pros with Tupe-C, but without the Touch Bar, which were produced in the period from October 2016 to October 2017

You can verify service eligibility by using the serial number on the Apple website. Owners of laptops can contact, from the date of sale of which less than 5 years have passed.

What will Apple do: in the SC they will replace the battery for free and for an additional fee they can clean the device from dust and debris.

Compensation for paid repair of this damage is also provided. Several models of power adapters are recognized by Apple as unsafe for use. Such power supplies can cause electric shock to users.

This applies to three-pin plug adapters for use in the UK, Singapore, and Hong Kong, and some two-pin plugs for Europe, Korea, New Zealand, Argentina, and Brazil.

Adapters must be replaced with new safe versions.

What models are involved in the program: problematic models of three-pin adapters are described here, and the two-pin power supplies that participate in the program are listed here for replacement.

Here is a list of problematic gadgets and accessories of the company to be repaired or replaced. You can prepare for the weekend and go to authorized service centers immediately after the holidays.

You can find out the contacts of the nearest authorized service center and the schedule of its work on this page.