What a mobile phone, laptop, player, game console looked like 50 years ago 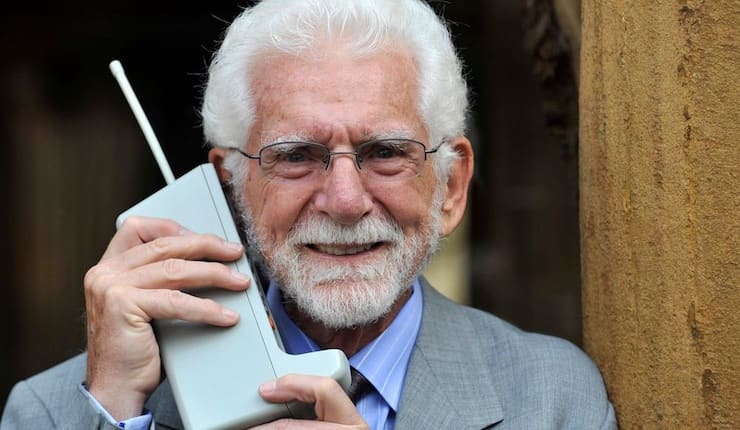 Today we can no longer imagine our life without a variety of smart and not so devices. They provide our everyday life, entertain us, and are an instrument of access to the ocean of information. But this was not always the case. The first gadgets were bulky, noisy, and often uncomfortable. Far from everyone believed in the future of such technology. The evolution of devices has made some devices unnecessary and others popular. But over the decades they have noticeably changed their appearance. Let’s remember some of the classic gadgets of the past after observing their evolution.

♥ BY THEME: An orchestra of old electronics (floppy, HDD, scanners) played the hit of the group Nirvana (video). 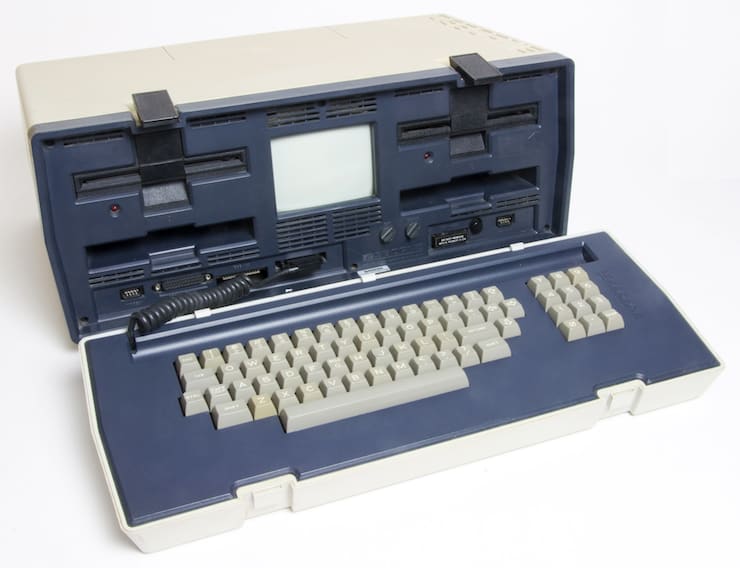 The idea to create a portable computing machine without wires and with a flat-panel monitor appeared back in 1968. But only in the early 1980s, attempts to implement the idea began. In 1981, the Osborne 1 model was created. A portable laptop could be called with a big stretch – 11 kilograms is convenient only to drag. Osborne 1, when closed, resembled a bulky suitcase. The device had a small black and white screen measuring 8.75 by 6.6 centimeters to display 24 lines of 52 characters. The Zilog processor ran at 4 MHz and had only 64 KB of RAM. The battery life was out of the question – there was no battery at all. Both externally and stuffing, the first laptop was not much like modern laptops. But at that time, the creators really managed to implement a computer in a compact form. The laptop cost $ 1,795 and was commercially successful.

♥ BY THEME: From PowerBook to MacBook Pro: The Evolution of Apple Laptops. 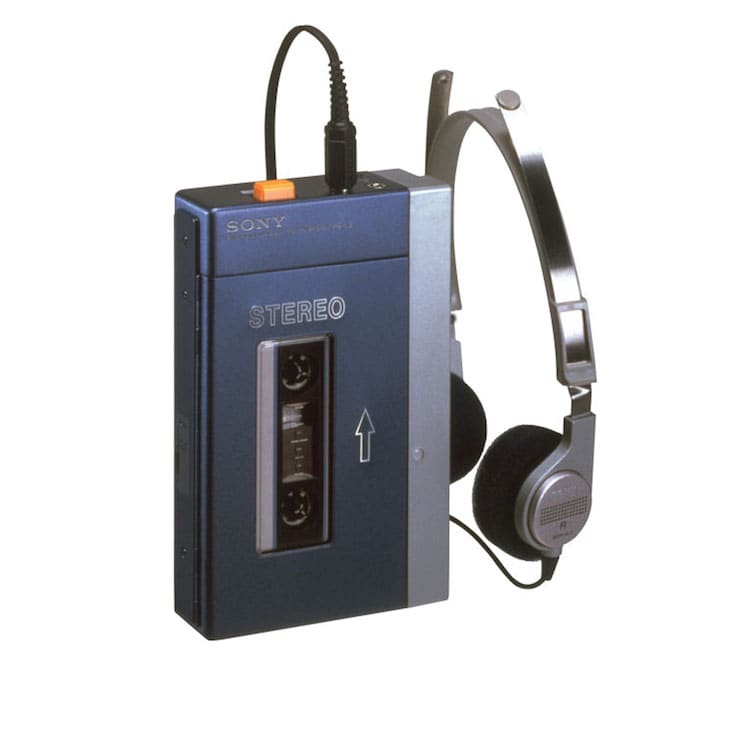 Now these devices may be the size of a matchbox, but most often their functions are generally implemented by our smartphone. And the history of small and portable stereo music players began in 1972. Andreas Pavel invited the largest electronics manufacturers to develop his idea for a cassette player. However, no one believed that people would want to walk the streets with headphones on. And the first full-fledged mass cassette player Walkman appeared in 1979. Sony managed to release a device just a couple of times the size of a cassette. For the sake of compactness, I had to sacrifice a speaker and a voice recorder. Up to this point, portable tape recorders have been the size of a suitcase or briefcase.

♥ BY THEME: Sounds when you turn on your computer and printer 25 years ago. Remember? 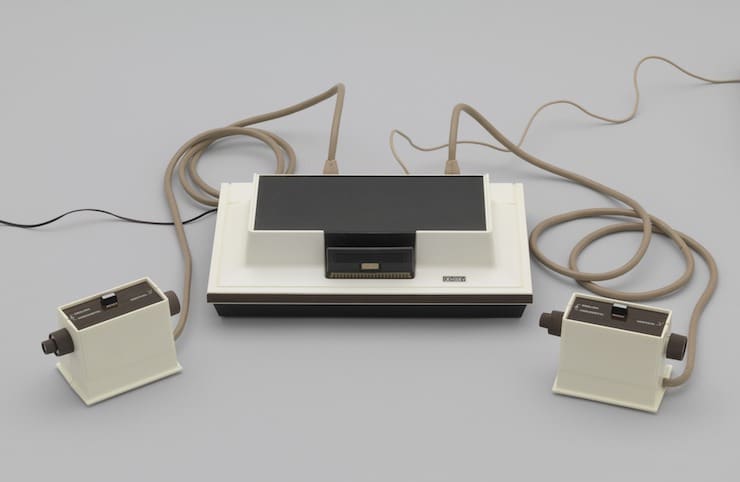 Sony Playstation and Microsoft’s Xbox dominate the gaming console market today. But in the early 1970s, no one knew anything about them. In 1972, the world’s first home video game console, the Magnavox Odyssey, was introduced. Her graphics were based on dots and dashes, and the games were downright boring. 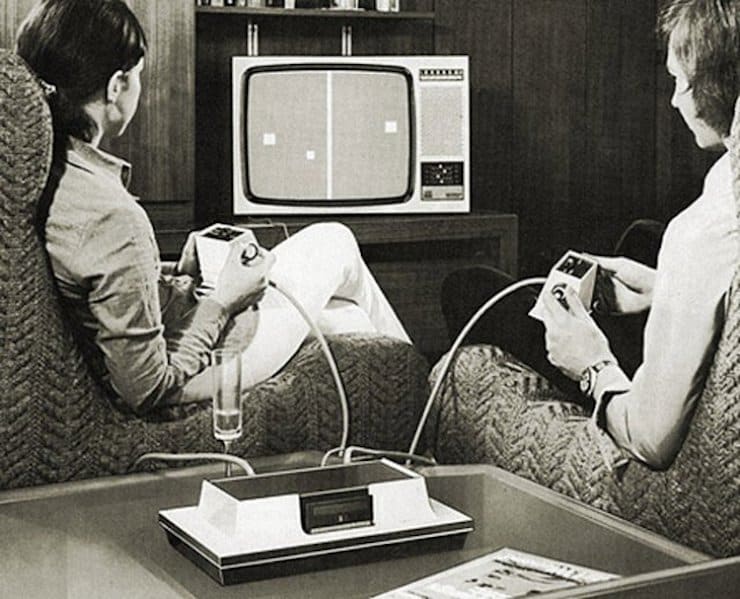 The $ 100 device had no microcircuits or microprocessor, operating on the basis of diode-transistor logic. But the descendants of this console have formed a whole generation of fans and even a part of modern culture.

♥ BY THEME: Simon is the world’s first smartphone, which appeared 15 years before the iPhone (video).

Phone with the ability to make video calls 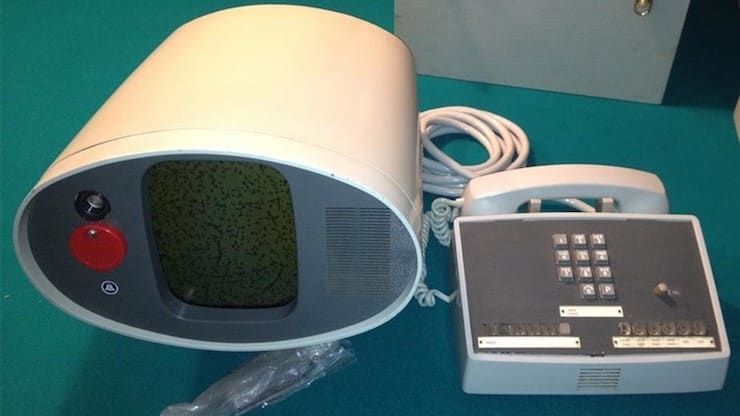 Even before the appearance of such devices on the market, people dreamed of the opportunity not only to hear the interlocutor, but also to see him. But for the time being it remained the lot of science fiction films. And today, video calls are a familiar part of our life. Even older people have already mastered this service, communicating from the villages with their relatives. And the first device for making video communication appeared in 1964 and was very cumbersome. AT&T’s Picturephone was a combination of a landline phone and a portable 5-inch TV. This miracle of technology turned out to be difficult to manufacture and expensive. It is not surprising that video communication turned out to be unclaimed at that time. 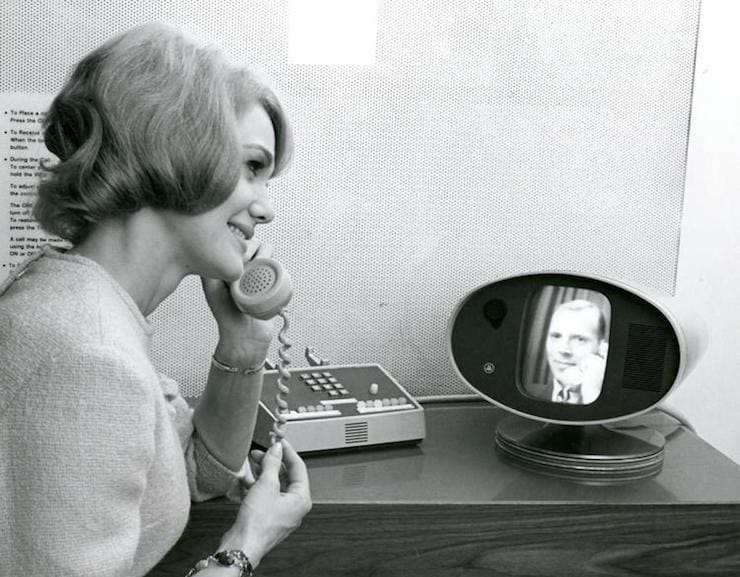 The manufacturer has set up several public access points in major cities, but even there a three-minute call cost between $ 16 and $ 27. The fashion service attracted only 70 users in six months.

♥ BY THEME: The first bicycle: history of creation, evolution of design (photo). 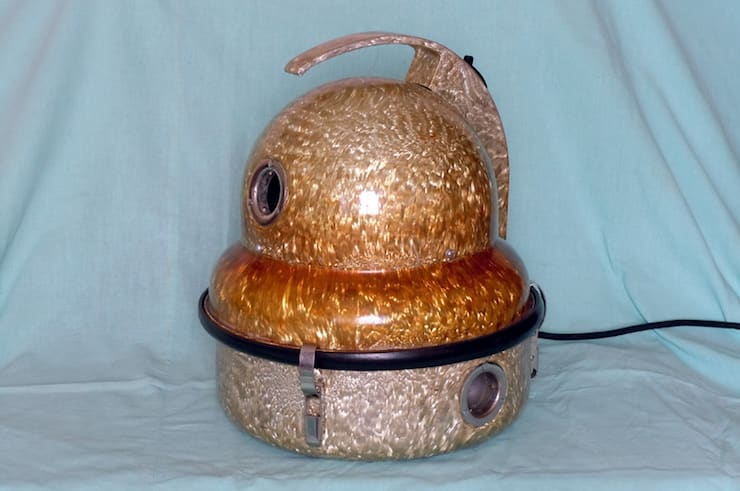 Today, there are many fairly compact vacuum cleaners on the market: washing, autonomous, smart. But even 60-70 years ago, the picture was not at all so rosy. And although the first analogues of vacuum cleaners appeared in Russia at the beginning of the 20th century, only Buran became a truly legendary model. It has been in production since 1957 and lives up to its name, being heavy, reliable and roaring. The design was copied from the Electrolux model, but who cared about that in the Soviet Union in those years? But an unkillable device could become a paint sprayer in reverse mode. The demanded device has become a real shortage in our country.

♥ BY THEME: What computer viruses looked like in the 80s and 90s. 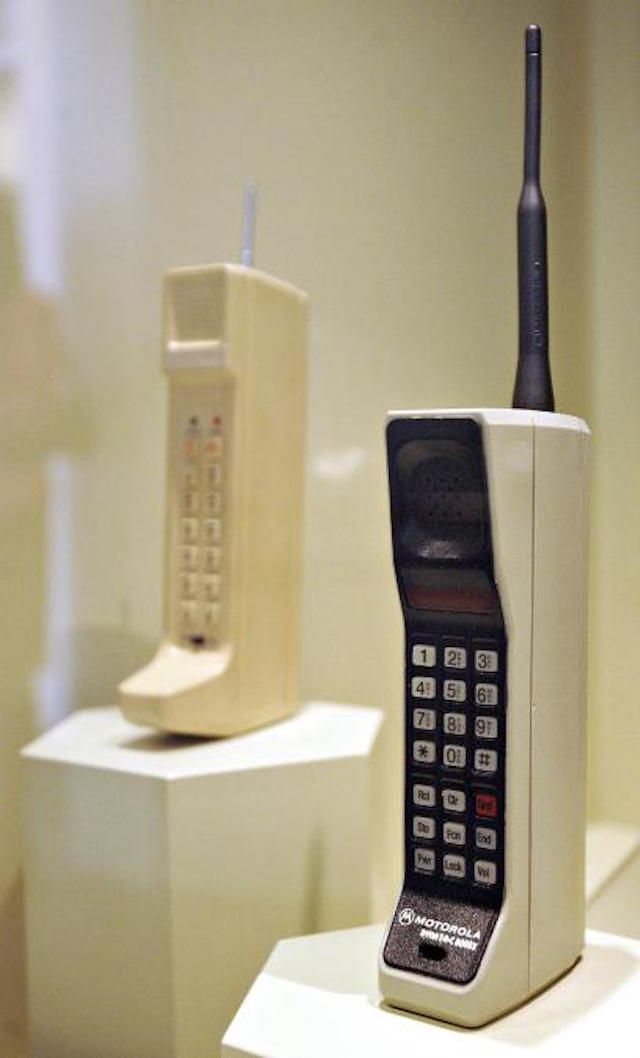 Back in 1957, Soviet engineer Kupriyanovich created a prototype of the first mobile phone. The device weighed about 3 kilograms, but the concept did not capture the minds. 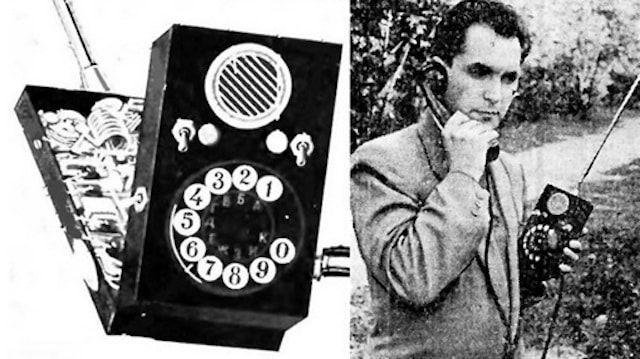 Subsequent prototypes were even more compact. 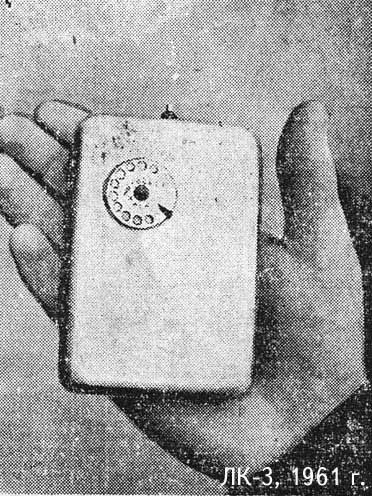 Nevertheless, the idea of ​​creating a telephone that was not tied to a single place with wires seemed interesting. In 1973, Motorola introduced the DynaTAC, which weighs relatively little – just 1.2 kilograms. And since 1984, mobile phones began to be mass-produced, gradually moving from the category of an expensive toy to the category of a mass gadget accessible to everyone. In the 1980s, mobiles could provide only half an hour of conversation or 6 hours of waiting. Today these problems seem inconceivable to us. 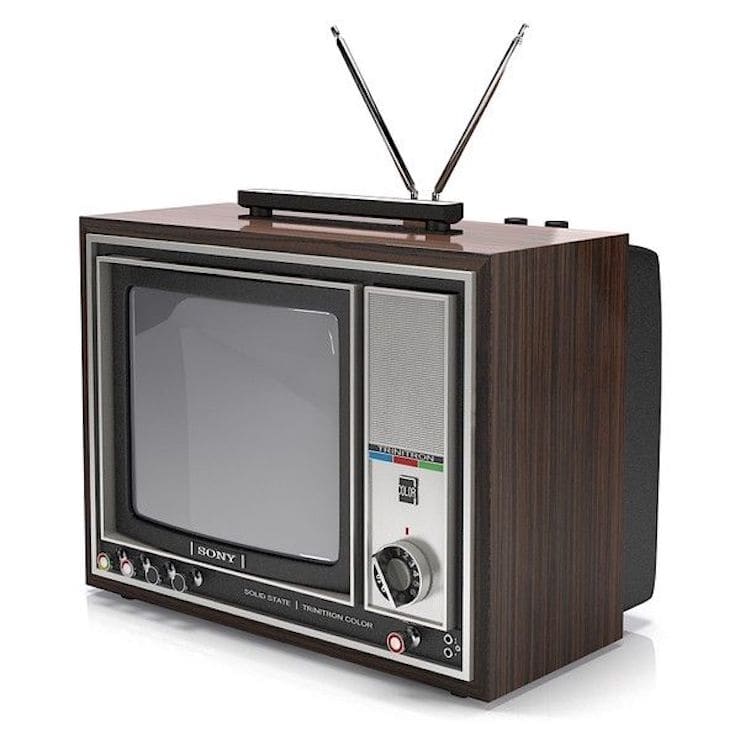 Color television came to America as early as the 1950s. And the classic Sony Trinitron has been in production since 1968. This TV quickly gained popularity, because it distorted the picture much less than others. At that time, no one thought about flat screens and thin frames. The Japanese, on the other hand, made the CRT part of the cylinder, and not part of the sphere, as their predecessors.

♥ BY THEME: 15 Useful Google Services You May Not Know About 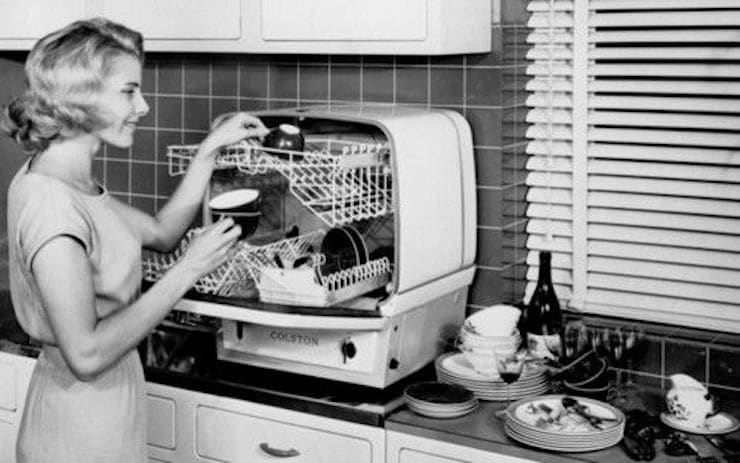 The modern kitchen is packed with effective solutions. The dishwasher has long ceased to be a luxury of the elites, having become an everyday tool for a housewife. Any family can purchase this gadget. But in this case, the evolution was not so obvious – already in the 1950s, Colston introduced a dishwasher comparable in size to modern models.

Kenshō review for iPhone, iPad, Apple TV and Mac – an extraordinary adventure in a surreal world where nature, time and space intertwine
At the first glance at the trailer for the atmospheric
06

IOS 15 Review: 50 Most Important Tips
This is not to say that Apple surprised everyone.
09

Hidden calculator, or how to use Siri to solve examples on iPhone and iPad
The voice assistant Siri is well known to iPhone and
011

How to take a screenshot on a Windows computer: 4 ways + the best programs to take screenshots
Windows users are well aware that there is a Print
011

iMessage and SMS: why are iPhone messages blue or green?
Many iPhone owners regularly face the problem of separating
010

Can I charge my iPhone or iPad with a MacBook Pro (30W or more)
What if you want to get the fastest charging for your
09
This website uses cookies to improve your experience. We'll assume you're ok with this, but you can opt-out if you wish. Cookie settingsACCEPT
Privacy & Cookies Policy