Marketers and designers are creative people, which means they are not always able to be critical of their own creativity. Together with the connivance of their leaders, this leads to various kinds of curious situations. In today’s review – the most ridiculous company logos.

♥ BY THEME: There are 16 circles in this picture, can you see them?

This logo was developed by a British company specifically for the UK Department of State Commerce, for which about 14 thousand pounds of budgetary funds were issued. Everything would be fine, but the logo was printed on ballpoint pens, and in an upright position (in the photo on the right) it looks far from as official as required by the state. officials.

After scandals with Catholic priests and high-ranking officials, the United States began to scrutinize every textbook, magazine or website for materials that in any way allude to pedophilia. However, the residents of Arlington can only laugh at such censorship, because they see the logo of the local pediatric center every day.

In a similar way, the management of the “Kids Exchange” store noted, placing a sign without spaces. It’s hard to believe that none of the kids’ mall staff noticed anything unusual (“Kid Sex Change”).

♥ BY THEME: Man with arms outstretched Leonardo da Vinci: what is the meaning of the picture?

But there are practically no complaints about the creators of this logo for the service and assembly of PCs. A mouse, just a computer mouse.

It is very good that on the sign of this dental clinic, next to the logo, there is an inscription with the word Dental. Thanks to this, the brain automatically switches to the dentists and no more pornography in the picture is observed.

But this Institute of Oriental Studies (presumably located in Brazil) very successfully demonstrates the harm from stereotypical thinking. The author did not think of anything better than to depict the roof, traditional for Eastern architecture, against the backdrop of a huge rising sun. The result is obvious.

Judging by the sign, this school teaches female cheerleaders, as well as hip-hop dances. The logo, you must understand, depicts a couple dancing jazz. Or is it a bust of one of the cheerleaders?

♥ BY THEME: Why is the Apple logo a bitten apple?

This is the logo chosen by a company that sells maple syrup in New England.

It is difficult to say for what specific reason the company went bankrupt Megaflicks from Florida, but the logo could be a good excuse. 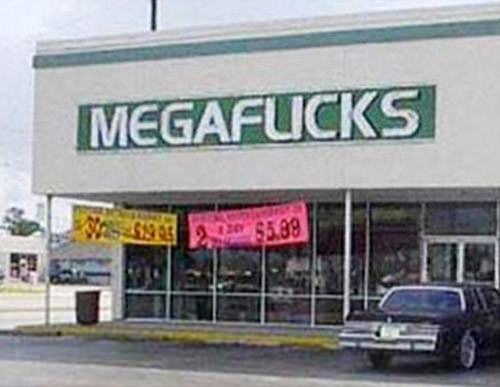