At one time, the game SimCity spawned a whole genre – a city-building simulator. Since then, many variants have appeared. The monotony of the action could be diluted with the addition of an economic component. In any case, games of this kind can even be considered meditative – build a city / country, and enjoy the spectacle of the multiplication of people and technology.

Against this backdrop, the Tropico game series has become a bright spot. The player is invited to become not just a faceless city builder, but a real dictator of a tropical island. Life boils around, not letting you get bored. The simulator became so popular that it received a series of sequels. And in December 2018, the iOS version of Tropico was released, adapted to the iPad. It is not a direct port of a specific game in the series, but resembles Tropico 3. 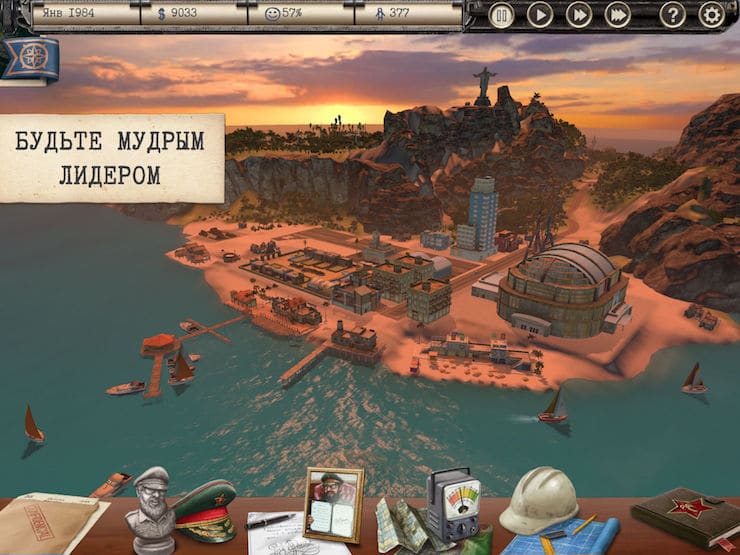 Fans of the Tropico series will see the same beloved tropical island in front of them. The player is invited to become his dictator, having at full disposal all the resources and tools for governing a young country. The action takes place at the height of the Cold War, so the mighty America and the Soviet Union do not mind using the island to their advantage.

In addition to the economic and urban planning component, the game also has a political one. Who to be friends with and how to use it for the good of your island is up to the novice dictator. Unlimited power attracts, but not everything is so simple – there are always those who want to continue the revolution and overthrow the tyrant. 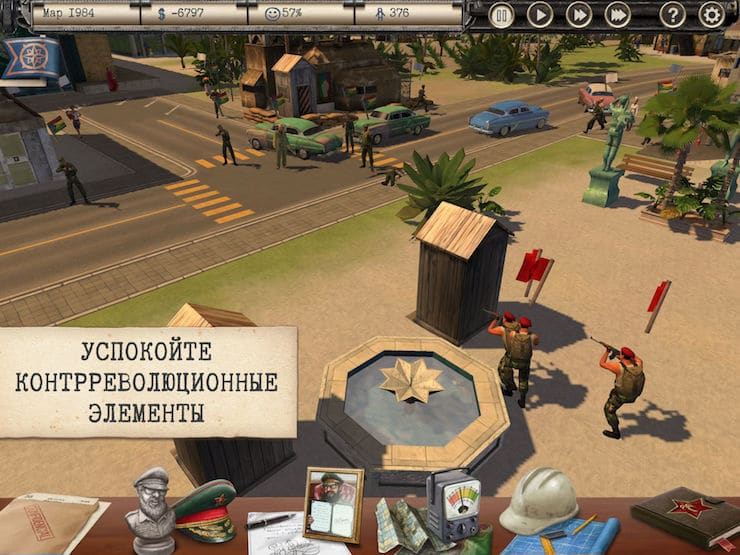 You will have to deal not only with foreign policy, but also with domestic one. The rebels do not sleep and are ready to act at any moment, as soon as popular discontent begins to roll over. Do not forget about the upcoming elections, with a classic set of “dirty” tricks: false pre-election promises, rigging results, getting rid of competitors. 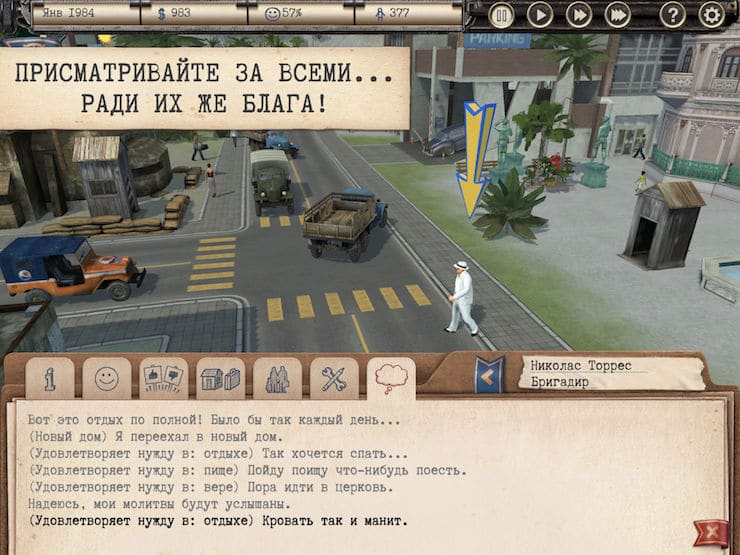 What to do on the island? The economic component is based on the choice of the country’s development paths. You can make it a tourist center by building entertainment facilities and hotels. Another way of development is the extraction of minerals for export. Or you can just use natural resources: sun and fertile soil and focus on agriculture. But will this money be enough to ensure the stability of the island? And residents also need entertainment, churches, medical facilities and schools. The dictator will have a lot of worries – construction and development cannot be stopped. You have to constantly look for balance and compromises, which makes the game exciting. 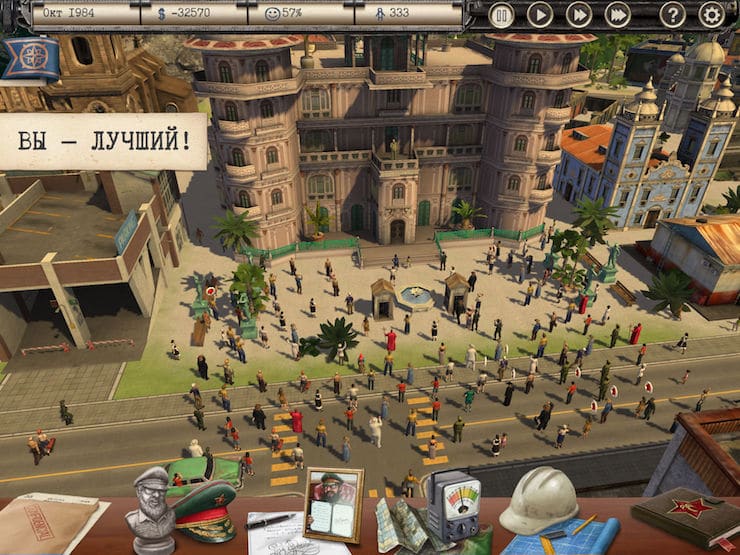 On a mobile device, the screen becomes a kind of camera. By touching the display, we control its movement and can travel around the island. This is how the life of a small state is controlled. You can look into its different corners and observe the behavior of citizens, the construction of new facilities, the arrival of vehicles and tourists. 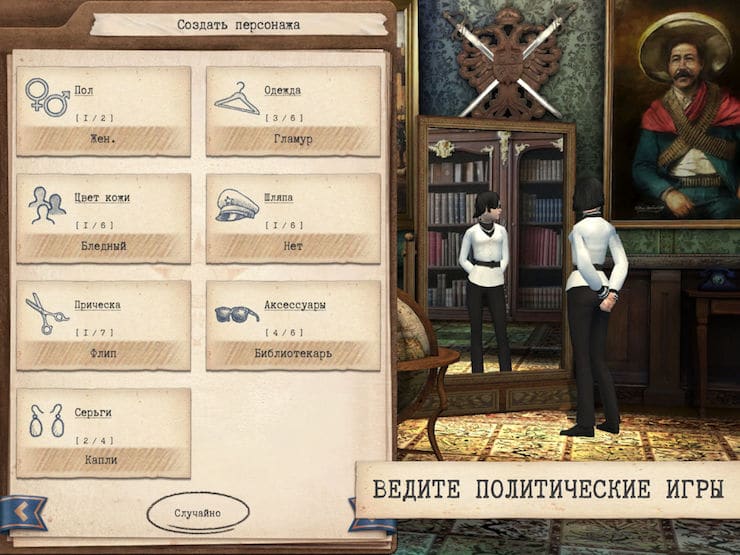 At the top of the screen, the current state of affairs is displayed: the current date, the amount of money in the account, the level of support of citizens and the population. There are also buttons responsible for speeding up or slowing down the time – in such simulators, you can’t go anywhere without them. And at the bottom of the screen there are large graphic elements responsible for the main actions of the player and activating the main menus. So, the construction helmet clearly refers to the construction of new facilities. 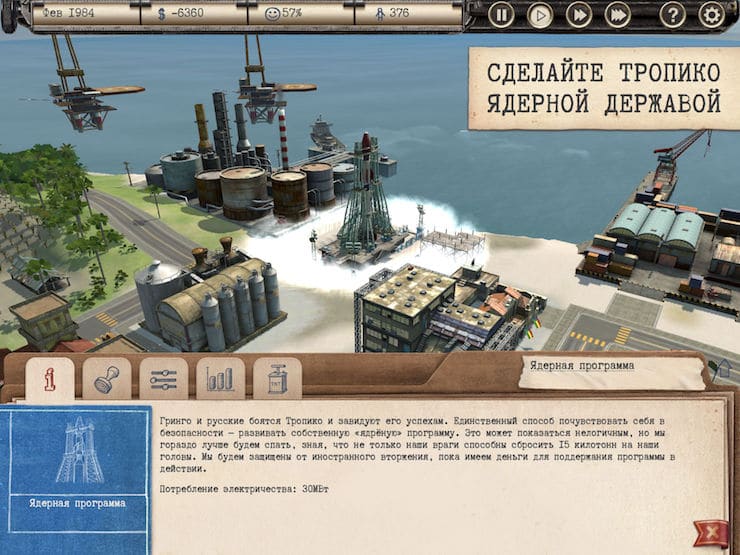 The game interface has been slightly redesigned for touchscreen devices. But at the same time, the spirit of the game, its mechanics and essence have been preserved.

The game came out quite resource-demanding. To run it, you need iOS 12 version and 3 gigabytes of free space. Graphics work is going to be a huge CPU load, so Tropico will launch on iPad 5th generation (2017) and later, or Pro models. 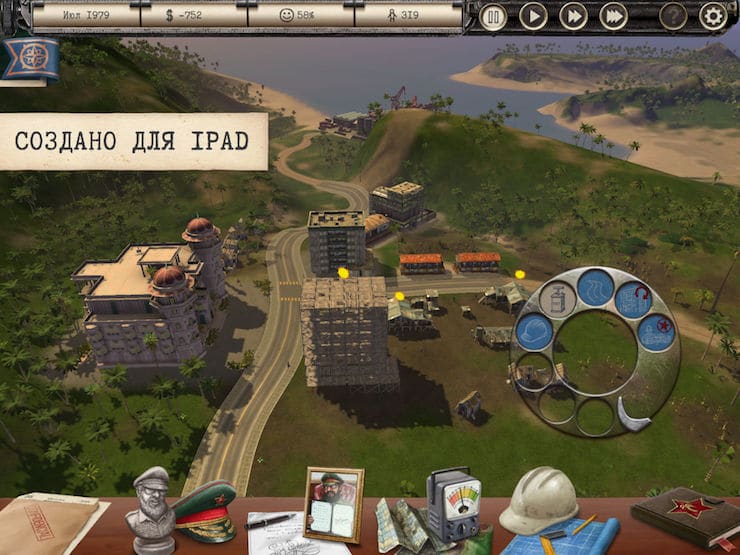 The game has been translated into Russian.