The ability to install a dark theme for the interface appeared in Apple TV back in tvOS 10. Its use is justified when operating a set-top box in low light conditions.

With the release of version 11 of tvOS, the set-top box has the ability to automatically change the interface theme from light to dark and back, depending on the time of day. This functionality is available on any Apple TV with tvOS 11 and later.

♥ ON TOPIC: How to check the charge level of your Apple TV 4G remote.

1. First you need to open the application “Settings”…

2. In it you need to go to the subsection Basic → Decoration… 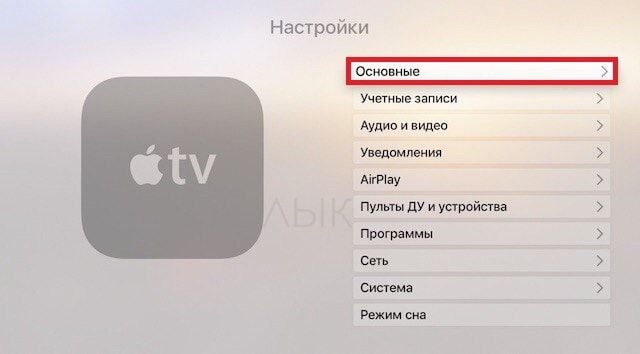 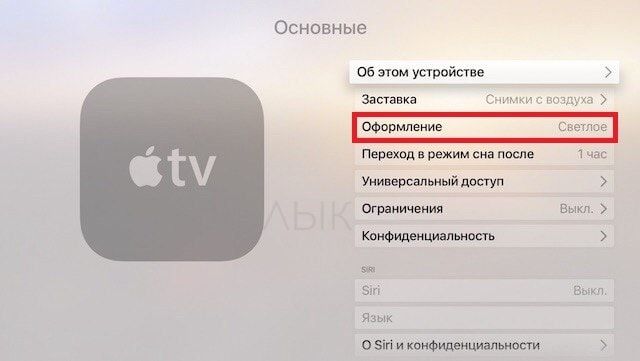 3. In this menu, the user interface design is selected: 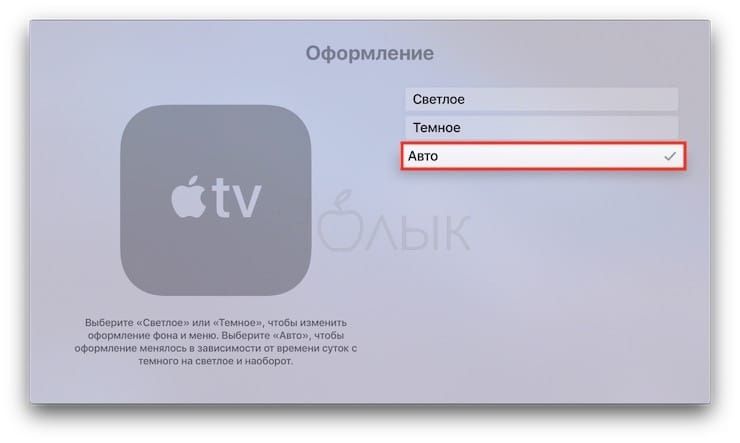 The dark tvOS interface will appeal to those watching movies, playing late at night, or in a dark room. 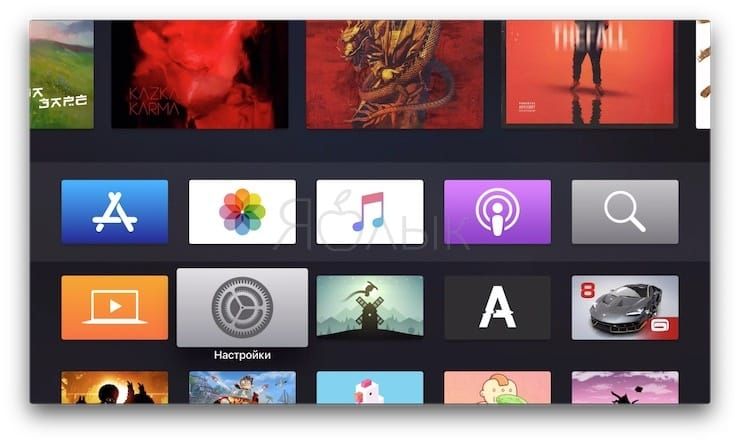 Automatic configuration sets the interface mode depending on the time of day, so this functionality is tied to the time settings. They need to be configured correctly. The time zone switch must be set to position “Is always” v Settings → General → Privacy → Location Services… This will allow the system to correctly determine the local time.

With the release of iOS 14, users got an interesting new opportunity – to change the design of icons, thereby creating their own themes. It is interesting that earlier Apple itself was very categorical about any attempts to customize the system. Moreover, users not only got the opportunity to create their own icons, but also sell them! One designer said that he was able to earn $ 9,240 overnight! Of course, we are interested in how such a scheme works.

♥ BY TOPIC: New in iOS 14: How to quickly navigate menus within apps.

For 13 years, iOS has been moving towards allowing users to change the look of the interface. At the same time, the company itself did not offer certain themes or templates, you can design a widget or make an icon using any picture. Users could not ignore this opportunity and began to actively use it, showing their creativity. Here are some examples:

How to change the icon on iPhone or iPad

Any user can easily change the familiar or already annoying desktop interface of their iPhone or iPad. For this:

1. Open Apple’s Quick Commands app (if it’s not on your device, you can download it here).

3. In the search box, enter the query “Open app“And then select Open app → Select… You will see a list of applications installed on the device.

4. Select the one whose icon you want to replace. The application shortcut will appear on the system. Open the additional menu in the form of three dots at the top right of the screen and create a name for the new icon. After that, click on the item “Add to Home Screen“.

From the pop-up menu, select “Select photo», And then set the photo, which should become the application icon. You can edit it if necessary.

It remains to select the required icon in the opened Photo application, and then press the button Add to in the upper right corner.

Icon redesign – a breakthrough or a failure?

Often a good idea has a hideous implementation. Customization in iOS 14 still has limitations. For example, there is no possibility of choosing a single theme for all icons at once and completely replacing the entire design of desktops. Users are encouraged to manually change each icon, then adding a shortcut to the desktop and hiding the old one in the application library.

Hundreds of joyful users are posting screenshots of their transformed desktops. But you need to understand that to create such a look for the system, you will have to spend a lot of time. Each widget and icon must be changed manually and one element at a time. Each change will require the actions specified in the Commands app. Of course, it won’t be difficult for the user to get confused. After all, there are some icons on the desktop, and others in the Application Library.

It’s good that Apple allowed them to customize the interface of their system, but there was no clear alternative to the native design. But Android has long had “Themes” with dozens of free options and thousands of paid ones. In a couple of clicks, you can completely change the appearance of the entire system.

♥ BY TOPIC: New in iOS 14: How to hide unwanted application pages from the home screen on iPhone and iPad.

Where can I find and download icons, do I have to pay for them?

Fortunately, you can easily find free icon packs for iOS 14. There is still no single resource where you could find the images you want. We have to use search and social networks, where novice designers actively share the results of their work. For example, here you can download icons in the style of iOS 6. You can customize widgets using the Widgetsmith application. But most of the popular themes are available on the Internet for a fee. There are many ready-made themes available on etsy.com. After payment you will receive a link to the package with pictures. And on the online sales platform Gumroad, there is even a customization package for iOS 14 in the style of Android.

♥ BY TOPIC: Tap iPhone Cover – Take a screenshot: How to bind actions to tap on the back of an iPhone.

How to make money on iOS icons?

A Twitter user with the nickname @traf on his own site quickly posted a set of pictures that allow you to customize the interface of iOS 14. The designer put up a simple icon pack for sale with a price tag of $ 28. Two hours later, the pictures were sold for $ 5,000, and after a few more hours, 330 sales had already brought $ 9,240.

The internet is wild. pic.twitter.com/BSOq0rosVg

@Traf made over $ 100,000 in a week. And this is far from the only example of how you can create your own icon design and make money on it.

♥ BY TOPIC: IOS 14 widgets on iPhone or iPad: how to add, customize, and use.

How to create your own icon pack and can you make money from it?

Designers recommend using Canva to create icons. It is just designed for creating logos, as well as for processing photographs. The toolkit is quite enough for self-generation of the icon.

The program already has icon layouts for popular applications. If there is no brand icon, then there is an option to select the default option. So, for a music service, you can set a note, for an online cinema – a piece of film, a gamepad for a game. But this can be done by any graphics editor, including the well-known Photoshop.

But to monetize your work, you need to create something special that grabs the attention of users. These can be icons that evoke nostalgia, like old versions of Windows or iOS, or unique works of authorship with a pronounced style.

And free access to icons after they are sold also hinders business. Nobody bothers the buyer to share the product with someone else or even put the pictures in the public domain. The right solution seems to be to create a dedicated theme store where designers can display their products. So far, the situation does not look organized. On the other hand, creators do not pay a commission on their sales, while Apple ruthlessly retains 30% on purchases made in its ecosystem. For some, the possibility of customization will be just a temporary entertainment, but iOS has been going to this function for 13 long years.