This legend is firmly entrenched in mass culture. Moreover, a widespread belief gave birth to the proverb: “Hide your head in the sand, like an ostrich.” It’s about this large bird’s odd way of avoiding danger. For some reason, ostriches prefer not to flee, but simply to stick their head in the ground. But once you think about this fact a little, it immediately begins to seem strange. Do these birds really have this behavior? What is it conditioned by, or how do they then behave in case of danger?

Do ostriches really hide their heads in the sand? 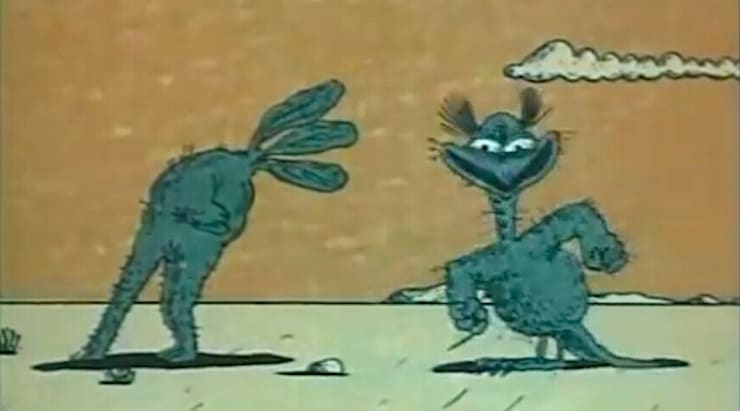 Ostriches clearly stand out among their feathered counterparts. Large birds cannot fly and rely solely on their powerful legs. But what do they do in case of danger? On the Internet, you can find many photographs of ostriches in a very unsightly shape – the back is raised, and the head is lowered, as if buried in the ground. And cartoons popularize this opinion, you can recall at least the Soviet “Wings, Legs and Tails” or the American animated series Jungle Cubs, which was based on Kipling’s “Jungle Book”.

The phraseologism “to hide your head in the sand” just refers to the behavior of ostriches, which are compared to indecisive people who prefer not to see the problem. And this expression is far from new. Even Dostoevsky wrote in his novel The Double in 1846: “He was burnt with shame and buried his victorious head in the paper, for exactly the same purpose with which an ostrich, pursued by a hunter, hides its own in the hot sand.” And the beginning of this legend, it is believed, was laid by the Roman historian Pliny the Elder. In his Natural History, he wrote directly about ostriches: “Their stupidity is no less remarkable; although their body is large, they imagine that by hiding their head and neck in the bushes, they will make the whole body invisible. ” Thus, the Roman emphasized the low intellectual abilities of strange birds. Please note that it is the bushes indicated in the original. When translating and interpreting the text, hot sand appeared instead of plants. But Pliny himself is clearly not to blame for the appearance of the myth.

Looking at the ostriches, it is easy to replace all the external absurdity of these birds. They have rare proportions of body parts, and they cannot fly at all. But ostriches successfully transform their shortcomings into advantages. So, a long neck and huge eyes make it possible to see an approaching predator at a great distance. And powerful long legs help to escape from danger. Hardly anyone will catch up with the bird, which rushes at a speed of up to 65 km / h. Even if the battle does take place, the huge claws on its paws will become an excellent defense weapon.

It is obvious that nature has given ostriches a considerable tool for self-preservation. It looks very strange then the option of salvation by burying the head in the sand. Does the bird really think that it will not be noticed? Such a large body stands out clearly. True, one of the main ostrich hunters is the cheetah, which is difficult to escape from. Ostriches sometimes try to use camouflage, but clearly not by burying their heads in the sand. 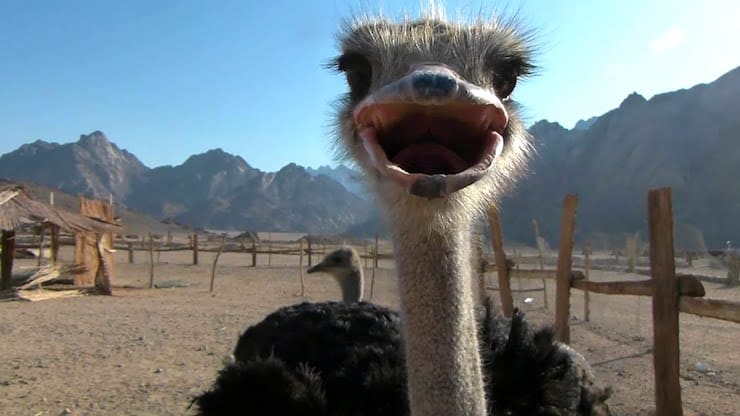 And if Pliny had nothing to do with it, then what formed the basis for the emergence of mass delusion? San Diego Zoo specialists see the reason in one of the chosen tactics for camouflaging an ostrich in case of danger. The bird crouches on the ground and stretches its head and neck on it. The similarity of the color of the ostrich’s body to the ground helps the bird to merge with the surface and deceive the enemy. According to another version, the appearance of the myth was facilitated by the behavior of the ostrich – these birds swallow small pebbles and gravel to help their digestion.

And BBC science journalist Charlotte Corny gave her explanation for this myth. To lay eggs, ostriches dig holes, where they hide future offspring. And so that the eggs are heated evenly, the bird rotates them. To do this, ostriches stick their head into a hole. And such a basis may well become the basis of a legend. Journalist Stephen Lovgren has a similar opinion. In his material for National Geographic, the author notes that ostriches often simply lower their heads low, checking if a predator has hidden in a bush or grass. Obviously, with your head held high, you can see what is happening in the distance, but not close. And long-term observation of the ostrich just allows you to see how the bird periodically lowers its head, in particular, at a watering hole.