There are so many three-dimensional shooters overloaded with graphics and effects that you are frankly tired of them. Sometimes you want to return to something unpretentious, but exciting. This mood of gamers is successfully used by the Finnish studio 10tons Ltd.

The first sensational hit of the developers was the shooter Crimsonland, which even survived a re-release in 2014. The player was asked to look from above at his hero and move him around the location, destroying the enemy crowd.

Tradition was developed in Neon Chrome (review) with a touch of cyberpunk, and in Time Recoil we were asked to use time travel, which clearly made the plot more interesting. Such arcade games have become popular also because they are easily adaptable to mobile devices with a touch screen.

The Finnish new creation, Tesla vs Lovecraft, could not disappoint. About what the game Tesla vs Lovecraft The authors of the game brought together two bright personalities who lived at the beginning of the 20th century: Nikola Tesla and Howard Lovecraft. Today both of them have gained a certain popularity, albeit in completely different genres.

If Tesla is a genius inventor, ahead of his time, then Lovecraft is the creator of his own horror genre with Cthulhu, Shoggoths, spiders and amphibious monsters. Suddenly it was possible to combine them in a new game. The backstory is not rich in details and fit in several slides. Lovecraft’s monsters burned down Tesla’s laboratory. The inventor goes out to the depopulated city streets to save the world.

Active gameplay quickly takes the plot into the background – there is no time to think about the reasons for what is happening, you need to crush enemies as quickly as possible. The player can find out later about the reasons for the disagreement between the villain Lovecraft and Tesla, about the motivation of the characters …

The game does not offer anything fundamentally new in relation to its predecessors in the genre. But the details help Tesla vs Lovecraft to attract attention and love. The hero moves along narrow streets or narrowed by obstacles, firing weapons at enemies.

To pass the location, you must destroy a certain number of monsters. Tesla is helped not only by standard firearms (pistol, shotgun, machine gun), but also by his own inventions. Thanks to them, the process of destroying monsters is much easier.

A useful skill of Tesla is the teleport, which allows you to instantly move over short distances. But this is quite enough to break away from the crowd of monsters and hide for a while in a secluded corner with first-aid kits and bonuses. True, fences and fences do not keep hungry monsters hungry for the flesh of an inventor for long. Another assistant to the inventor is his combat robot. However, to use it, you must first collect parts of it by location. It will become much easier to fight and survive with a robot.

The dynamics of the action is very high. There is no time to stand still and aim single targets. Tesla must be constantly in motion. The player himself needs to plan the character’s movements, not only dodging hordes of enemies, but also looking for dropped objects or pointers to them. The first-aid kit will heal the hero, and special skills will allow you to mow down monsters in literally dozens.

Affected targets gradually increase Tesla’s experience, which makes it possible to pump his talents between levels. The tree of development is quite simple and straightforward: from a banal increased damage to a protective field. You won’t be able to play in a relaxed mode – already at 3-4 locations the stream of enemies will become so dense and deadly that it will require maximum concentration. 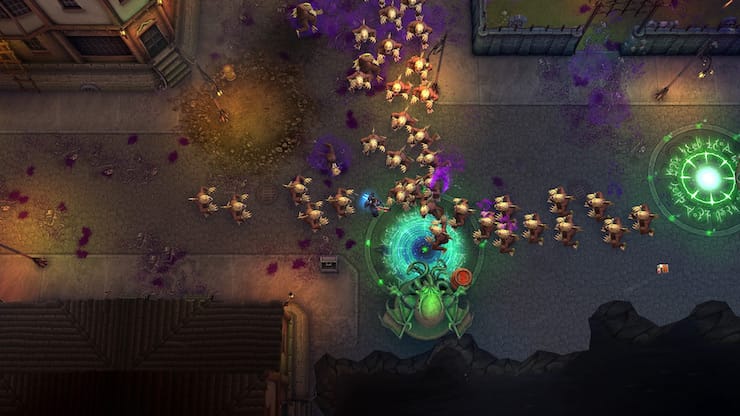 Graphics and sound in Tesla vs Lovecraft

Such games become successful precisely due to their visual component and soundtrack. And if the textures in Tesla vs Lovecraft are quite ordinary, then the special effects really draw attention to themselves. All these explosions, lightning, fireballs and electric fields sometimes fill the entire screen. There is also music in the game, but somewhere far in the background. The sounds of gunfire and the growling of monsters clearly overshadow her. And there is simply no time to listen to what is happening – there would be time to tap on the screen.

This arcade shooter is unlikely to be a revolution – the genre has long been revealed by its predecessors. The game strongly resembles the classic Crimsonland, improved and populated with new heroes. The gloomy world of Lovecraft with a flamboyant hero-inventor created a colorful arena for battles.

The game will drag on for 3 hours, and then the heroes and locations will begin to repeat themselves. And the difficulty jumps illogically – passing the boss can be an easy task compared to the previous action. But in general, the game is a must for fans of this genre. The game has been translated into Russian.