Everyone likes mystical stories. Stories of aliens, strange disappearances, and coincidences are consistently high on the news. Americans even believe in some kind of Tecumseh curse that plagues their presidents. But speaking of the fate of the heads of this state, another story strikes the eye. There are a lot of coincidences in the biographies of two popular American presidents – Lincoln and Kennedy. This list was first published in 1964, right after the Dallas tragedy.

♥ BY TOPIC: The Curse of Tecumseh: The Predicted Deaths Of Seven US Presidents Or Coincidence?

True, corrosive historians are not so greedy for sensations, but methodically work on the material. So, Martin Gardner in the popular science magazine Scientific American debunked some of the coincidences, later this information even formed the basis of the book. Nevertheless, the story of the coincidences in the fates of Lincoln and Kennedy remains at the hearing. But what lies at its core, and what have the researchers been able to refute?

Real coincidences in the fate of Lincoln and Kennedy 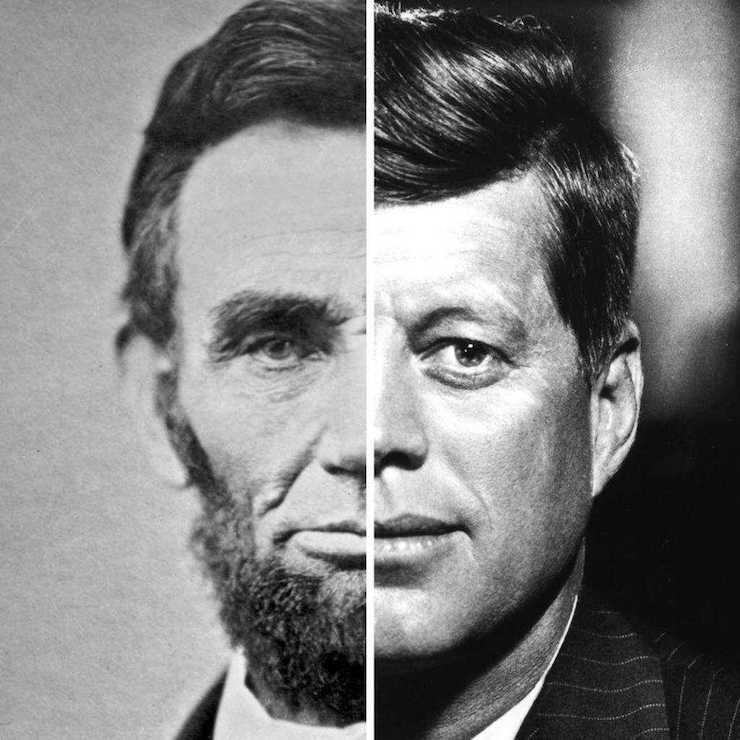 Martin Gardner has compiled a list of facts that underlines such a strange coincidence. At the same time, a longer list can be found in different publications. But here is the main thing that attracts attention:

2. Both politicians paid a lot of attention to the rights of African Americans.

3. Lincoln and Kennedy died on Friday, their wives were nearby.

4. During their stay in the White House, both spouses of the presidents lost a child.

5. The killer’s bullet entered the head from behind in both cases

6. Lincoln met death at Ford’s theater, but Kennedy was killed while driving a Ford Lincoln car.

7. The deceased Lincoln was replaced by Vice President Johnson, and Deputy Kennedy had the same surname. Both vice presidents were Southerners, Democratic and former Senators.

9. The first name of Lincoln’s secretary was John (but not Kennedy, as they sometimes say), but Kennedy’s personal assistant was called Lincoln.

11. Both terrorists were southerners and adhered to a policy of extremism.

12. Both Booth and Oswald did not live to see the trial, being killed before him by angry citizens.

13. Booth killed Lincoln in the theater, and then hid in the barn. It is believed that Oswald shot Kennedy from the book depository, and then tried to hide in the cinema.

14. The names LINCOLN and KENNEDY have seven letters each.

15. The names of the Vice Presidents, ANDREW JOHNSON and LYNDON JOHNSON, have thirteen letters each.

16. The names of the assassins, JOHN WILKES BOOTH and LEE HARVEY OSWALD, contain fifteen letters each.

18. Both of them were the second children in the family.

19. They got their names in honor of their grandfathers.

20. Both men had congenital genetic diseases.

21. They loved to sit in rocking chairs. Presidents were killed, in fact, in a sitting position and on the move.

22. Lincoln and Kennedy loved poetry, including Shakespeare, and were also storytellers of anecdotes.

23. Their spouses were already engaged to other men at the time of their marriage.

24. Both first ladies were of aristocratic origin, knew French and wasted money.

25. Mary Todd Lincoln and Jacqueline Kennedy were married at the age of 24.

26. Lincoln’s sons were named Robert and Edward, and the Kennedy brothers had the same names.

28. Both presidents had 4 children, but two died – one before assuming office, and one after.

29. Lincoln’s son served as ambassador to England, the same post was held by Kennedy’s father.

30. Lincoln entered the House of Representatives in 1846, and Kennedy exactly 100 years later.

31. Lincoln’s candidacy for the presidency was supported by Secretary of the Navy John F. Kennedy.

33. Both presidents, almost immediately after taking office, threw the country into a war.

34. Kennedy’s Secretary of Defense was Robert McNamara, and Lincoln’s friend was John McNamara.

35. Both vice-presidents had kidney stones, and they are the only politicians in this post with such a diagnosis.

36. In addition to what has already been mentioned, there have been other coincidences regarding presidential killers. Both extremists had a height of about 172 centimeters, they were brought up in dysfunctional families, in early childhood they lost their fathers. Booth and Oswald were arrested by policemen named Baker, and the arrows were killed from the Colt before the trial and outside the prison.

37. Presidents died the day before the holiday. Lincoln didn’t make it to Easter, and Kennedy’s to Thanksgiving.

38. Both presidents were accompanied by another married couple, the men were injured.

39. The politicians did not die immediately after the injury.

40. And the place of death began with the same letters – P and H (Peterson’s House and Parkland Hospital). And they buried Kennedy, as his widow wished, according to the script for Lincoln’s funeral.

Criticism and feature of coincidences in biographies of Lincoln and Kennedy

There are really so many coincidences that it attracts attention. Nevertheless, the compilers of the lists sometimes loosely interpret the facts to form a brighter picture. So John Booth was born not in 1839, but in 1838. So the difference with Oswald was 101 years. Bout cannot be considered a southerner, his home state was not included in the Confederation. Oswald, in general, lived mainly in the north and was not guided by political motives in the murder. It is often said that Lincoln’s personal assistant was named John F. Kennedy, but the names of his secretaries are John Nicole and John Hay. Another coincidence is also mentioned – Lincoln visited the city of Monroe shortly before his death, and Kennedy, shortly before his death, was in a relationship with actress Marilyn Monroe. But both facts are extremely doubtful – the city of Monroe in Maryland was not found, and the love story of the president and the actress is a beautiful legend. The beauty died in general a year before the death of her admirer.

However, most of the coincidences can be easily explained. Thus, the difference in the dates of elections to the House of Representatives and the beginning of presidencies with a difference of 100 years is not surprising given the frequency of these events in an even number of years. The fact that the murder took place on Friday is also understandable. Public events such as a performance or a president’s visit to the city usually take place on weekends or Friday. It is clear why the killer shot in the head – he had no special options. Booth walked up to the back of Lincoln’s cross as he sat in the rocking chair. Oswald, on the other hand, aimed from the back with a rifle, and the head was the only place hitting which would guarantee death. It is not surprising that the names of the presidents coincide, since Johnson is the second most common surname in America, after the Smiths.

In total, the complete list of coincidences concerning Lincoln and Kennedy themselves, their vice presidents, family members, killers and even killers of killers has more than 200 facts. But most of them are frankly insignificant, can be easily explained or generally banal. Interesting coincidences in the biographies of Lincoln and Kennedy do take place. Of course, this is partly understandable, but sometimes the facts are frankly manipulated for the sake of a sensation. Like any high-profile story, this one was overgrown with additional facts, which made it possible to form an integral part of American folklore.