Cats are undoubtedly everyone’s favorites, and almost no one can resist the warm purring lumps. If you need to “spin” something, stick a cute cat there, and success is guaranteed. Fortunately, in Cat Quest, cuddly kittens aren’t just bait for potential players. The game from the Singaporean independent studio The Gentlebros truly captivates and gives a lot of pleasure, although not without the help of cute four-legged.

Cat Quest is an action RPG inspired by RPGs like The Elder Scrolls V: Skyrim, Legend of Zelda and Final Fantasy. The action takes place in an open world, completely inhabited by kittens of all stripes – here you can meet villager cats, magician cats, adventurer cats and even evil witch-cats. Of course, there are also funny monsters, but they pale against the background of the meowing kingdom. 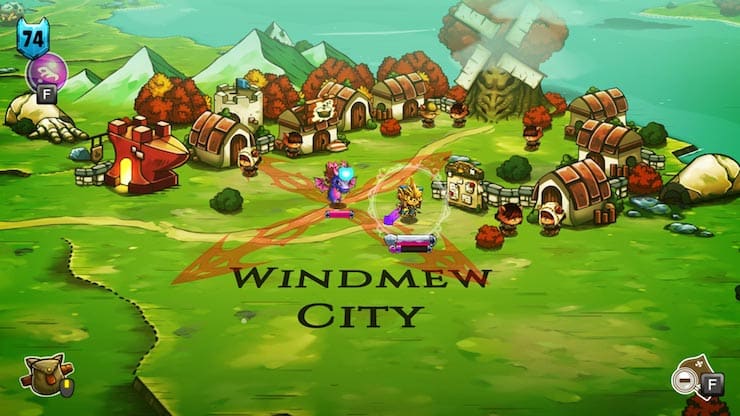 The country of cats is called Felingard. Rather, it is not even a country, but a whole continent surrounded by seas. The edges of the continent have bizarre outlines, and the land is replete with dungeons and outlandish ruins. The detailed map of Felingard that appears on the screen resembles a board game card. All details are carefully traced, and the names that play up everything related to cats cannot fail to bring a smile. 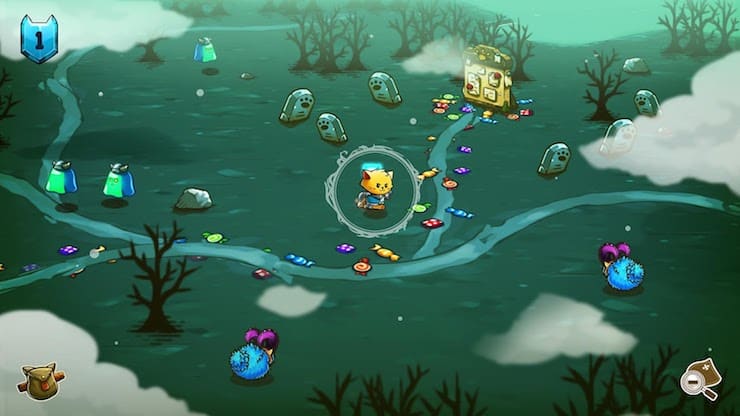 According to the plot of Cat Quest, the evil magician Drakot kidnapped the sister of the main character-cat – the legendary dragon-slayer Dovakot. At the same time, the hero himself ended up on land, and to save his sister from captivity he must fight four dragons. Defeating magical reptiles is not so easy, and you will have to train your character with might and main by completing various tasks. 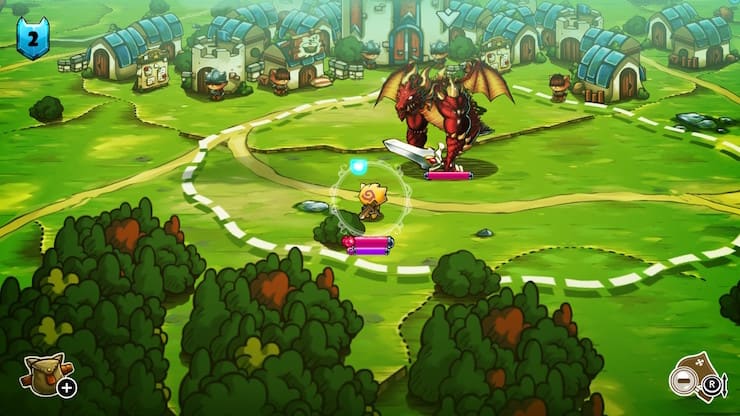 Do not worry, because fighting opponents is actually not that difficult. All enemies have only a certain set of hits and behave according to patterns. Moreover, all hits are visualized before being applied, and you will have enough time to prepare. You can deal with opponents both with the help of spells, and simply by chopping them with a sword. True, not everyone can be defeated with magic alone, and some enemies have enviable dexterity and can use combinations of blows. It is worth noting that in the game the emphasis is not on points, but on your skill and reaction. 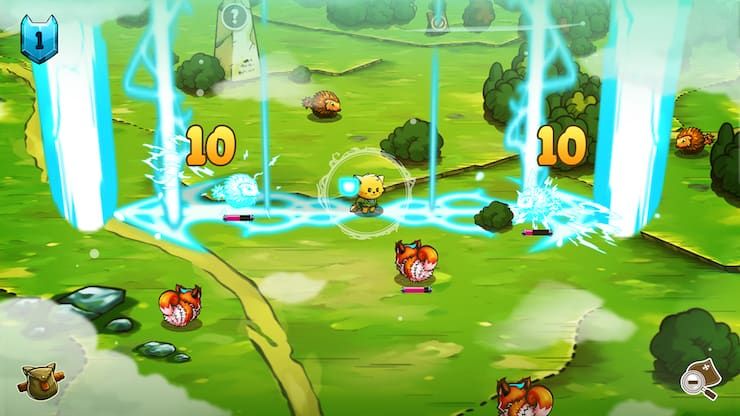 Overall, Cat Quest is a lot of fun to play, and time flies by (rest assured, with this game appearing on your phone, a few nights will definitely be busy). All quests are simple enough, but very funny. Nothing supernatural is required from you – choose a quest (for example, destroy the monsters in the cave) and pump the level. 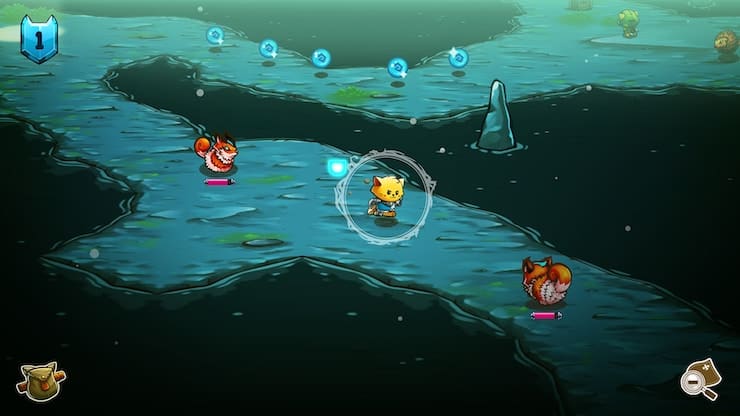 When it comes to graphics, Cat Quest is a sheer treat on the eye. The 2D game is very colorful and bright, the kittens are incredibly cute and the monsters are funny. If you are looking for a fabulous good game that will suit both children and adults, download Cat Quest, you will not regret it.

Fans of strategies are surely familiar with the game Kingdom, originally available only for PC and Xbox. Now your favorite game is optimized for touch screens, and you can play it on Apple’s mobile devices.

Kingdom: New Lands received an old-school minimalist graphics and only three control buttons. However, the apparent simplicity should not mislead you – there are a lot of secrets in the game, and you will have to pretty much break your head over them. Some may not like the lack of clues, but objects, characters, and mysterious statues will help you solve problems. True, you first need to find out exactly how they can help.

The aim of Kingdom: New Lands is to build a kingdom in the swamps and protect it from demons that constantly attack your possessions after sunset. Keep in mind that you cannot build something yourself, but you can hire builders for a fee. The same goes for attacks. To carry out attacks on the enemy you will need to pay mercenaries. All you can do is drive left and right on a horse and pay with coins for services. However, everything is as befits a true king. Be careful – losing to Kingdom: New Lands is easy. Demons can attack you and steal the crown. In this case, write is gone, the game is over.

♥ BY TOPIC: The best games for iPhone and iPad according to Yablık.com: 100 of the best.

The lack of clues adds mystery to Kingdom: New Lands. It is worth noting that the mysterious atmosphere is one of the main advantages of the game. At the very beginning you will meet the ghost of a king or queen. He will tell you how to get to the fire and give some advice, and then the fate of the kingdom will depend only on you. Resist the temptation to use the guides available on the Internet. It is much more interesting to see for yourself the consequences of your actions. Yes, some of your actions will lead to death, but do not despair – each time you will gain more experience and become farsighted.

A few words about the design of the game. The eight-bit retro-style graphics are truly eye-catching. The light of stars, glare on the water and natural phenomena are clearly traced. Day is replaced by night and vice versa. The weather also does not remain the same; noticeable changes in the seasons.

The musical design will also not leave anyone indifferent. The soundtrack is very calm and melodic, but at the same time evokes an eerie mood. When the environment changes, so does the music. In addition, changes in the melody suggest what to expect next. Importantly, the soundtrack does not seem monotonous, and the repetition of the melody is invisible.

Among the minuses of Kingdom: New Lands can be noted a certain length of the game. Few manage to get through to the end.

The game can be downloaded from the App Store for 749 rubles. Kingdom: New Lands is compatible with iPhone, iPad and iPod touch running iOS 10 and later.

In 2015, Irohhide Game Studio introduced a new creation – the third part in the famous Kingdom Rush series of games, which is one of the best in the tower defense genre. Goodbye, work! Play Kingdom Rush Origins!

The gameplay here is the same as in the original KR and Kingdom Rush Frontiers. The player needs to lead the army of elves and protect their native lands from a variety of monsters, sorcerers, gnolls, etc., build defensive towers and learn how to manage improvised troops and heroes. Terrain plays a big role – on some maps it becomes interactive, and with some skill you can get good tactical benefits from this.

In opposing evil, the player will be helped by completely new structures, spells and heroes.

In addition to 8 new towers, 30 new enemies, 9 new heroes and three difficulty levels, seventy special achievements await the player. They will open as you progress through the game.

Like previous versions, Kingdom Rush Origins pleases with branded “cartoony” graphics, so beloved by the fans of the game and becoming the brand name of the series.

The version for the iPhone costs 229 rubles, the option for the iPad (you have to buy separately) will cost 379 rubles. System requirements: any iOS device with an operating system version of 8.0 or later.

The official Kingdom Rush Origins trailer for iPhone and iPad: