There has been no talk of political stability lately. Wars, revolutions and armed conflicts force thousands of people to leave their homes and look for a better place in a foreign land. And the problem of refugees is one of the most acute in the modern world.

Prosperous countries cannot accept so many people with an alien culture and language, who often do not particularly strive to become a part of the new world. Travel stories of people without visas and documents to other countries often resemble a thriller, because it is accompanied by risk and difficulties. But sometimes such cases have a tinge of comicism. This happened to the Iranian refugee Mehran Karimi Nasseri. His fate even became the basis for the script of the famous feature film “Terminal” with Tom Hanks in the title role.

In the late 1970s, the Shah’s regime in Iran tightened its domestic policy, which ultimately led to its downfall. But earlier, all the dissatisfied were persecuted by the authorities or even expelled from the country. A similar fate befell activist Mehran Karimi Nasseri in 1977. He tried to obtain political asylum in one of the European countries, but was refused everywhere. Only in 1981, the Iranian received the status of a political refugee from the UN, which gave him the right to acquire European citizenship. But the story did not even think to end there.

The refugee’s mother had British citizenship, which is why he decided to leave Belgium, where he lived, to England. The adventure began in 1988. Nasseri’s path lay through Paris. But there, at the station, a bag with documents was stolen from an Iranian. Nevertheless, he somehow managed to get on a plane to London. There, at Heathrow, Nasseri, of course, did not go through passport control and was sent back to Charles de Gaulle airport. But the French authorities could not issue a permit to enter the country to an undocumented refugee. There was simply nowhere to deport a person with an incomprehensible status. So Nasseri got stuck in Terminal 1 of the main French airport. 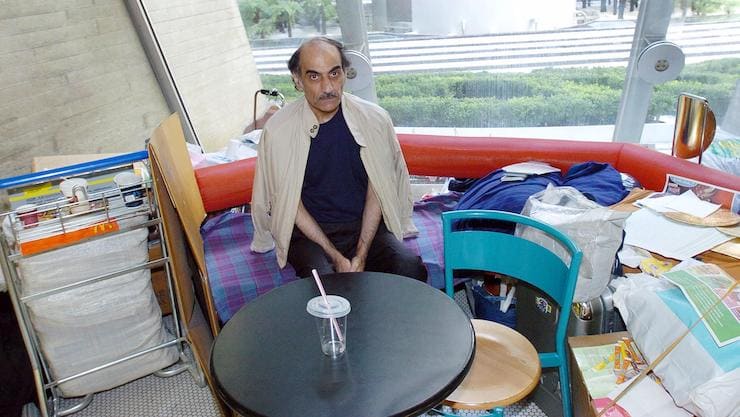 The solution to the problem would be to obtain new documents in Belgium, but this required, firstly, a personal appearance, and the laws of the country deprived the refugee who left her of the right to return. Nasseri’s attorney was a Parisian human rights lawyer, Christian Bourget. He fought for the status of his ward. In 1992, a French court finally ruled that Nasseri had entered the airport legally and could not be expelled. But at the same time, the decision did not say anything about the refugee’s right to leave the airport. Only in 1995 did the authorities grant Nasseri the right to return, but in exchange for a promise to live and work further in Belgium under the supervision of social workers. But the Iranian was still planning to live in England, which is why he refused. 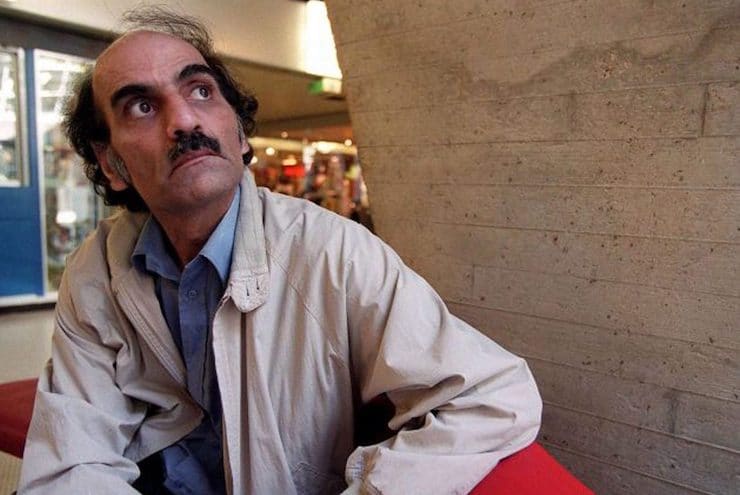 Nasseri lived in the terminal of Charles de Gaulle airport while awaiting a solution to his problems. At first, it was fed by passengers and employees, and over time, the refugee became a local landmark. He was willingly interviewed, journalists devoted articles to him. The bar workers knew his place, where he always sat. The airline clerks even received letters for him. Outwardly, Nasseri looked very dignified – nothing betrayed him as a refugee who had nowhere to go. The man’s clothes were well-groomed, his mustache well trimmed. He put his only blazer in a plastic bag and hung it on a trolley. The rest of the things were in a battered suitcase. 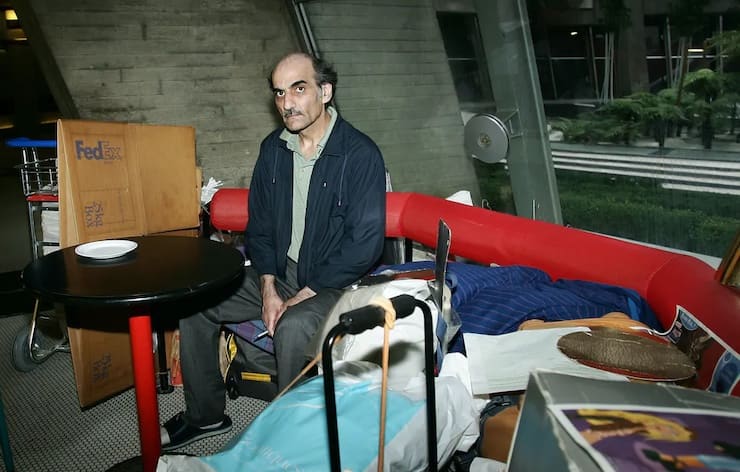 Nasseri’s life followed the rhythm of the airport. The man woke up at 5-30 am to shave in the men’s room before the passengers arrived. Then the refugee read all day. At night, he waited for the shops to close and went to the toilet again to brush his teeth with a brush and toothpaste from the free travel kit. Once a week, he rinsed his clothes in the bathroom at night. At the same time, Nasseri never asked anyone for help. He was offered clothes, but he proudly refused. But the refugee accepted food stamps and small money. Nasseri was not idle at all – he not only read a lot, but also started a diary, began to study economics.

And although in 1998 the lawyer managed to get the documents back to the refugee, he decided to stay in his favorite place. This is quite understandable from a psychological point of view – a person is used to being in a huge and understandable “bubble”, fearing the big world outside the airport doors. In total, the Iranian lived at the airport for 18 years. The saga ended in July 2006 with the hospitalization of an Iranian due to an unknown illness. Six months later, Nasseri was discharged, lived for some time in a hotel, but, in the end, settled in Paris.

The story of a refugee living in an airport for years became famous even before it ended. So, on the basis of these events, the French shot in 1994 the comedy film “Lost on the Road” with Jean Rochefort. Several documentaries were filmed about Nasseri himself in 2000 and 2001. 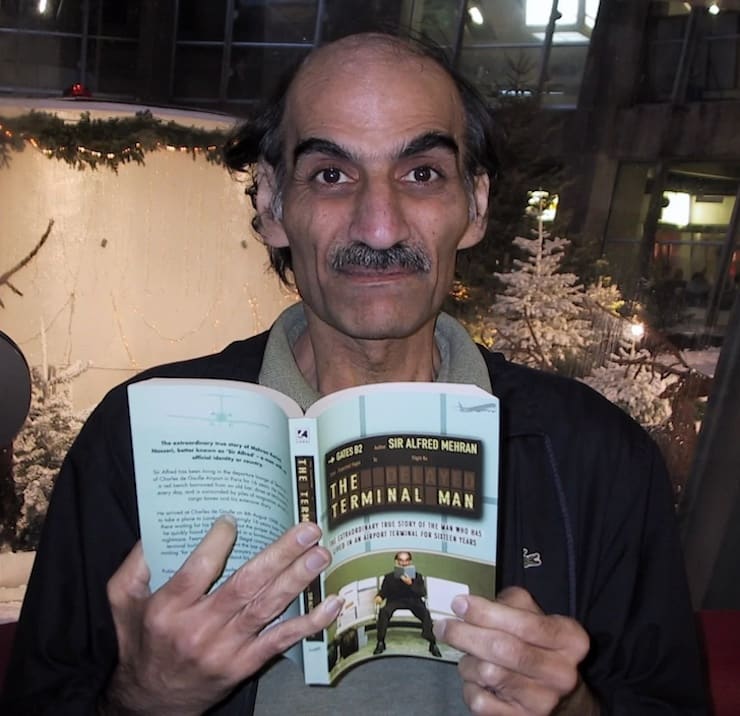 And the British composer Jonathan Dawa staged the modern opera Flight, based on history. After all, Steven Spielberg’s The Terminal, starring Tom Hanks, came out in 2004, although the film does not mention Nasseri.

As a result, it became known that the refugee received from the producers 250 thousand dollars for the right to his story. And the prototype itself even carried a poster for the new film around the airport – a very original PR solution! 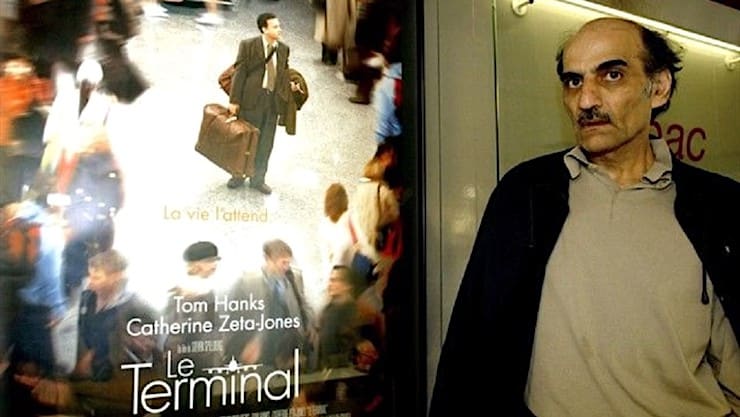 I must say that the history of long-term residence of the refugee Nasseri at the airport is far from unique. Similar incidents have occurred at other airports.