Eating food off the floor? Dismiss! Any normal person will disdain this. But what if the product just fell to the floor and lay there for a few seconds? In such a situation, many are guided by the unwritten “rule of five seconds.” For some reason, it is believed that during this time the food simply does not have time to get contaminated or get bacteria. It must be said that this is an international rule, in our country it is used more often in the form “What is quickly lifted does not count as fallen!” But how true is this statement in reality?

♥ ON TOPIC: How vegans differ from vegetarians.

The five second rule applies to food that has briefly fallen to the floor. According to him, even if some microbes get on the food in a few seconds, there will be so few of them that the gastric juice can easily cope with them. And the food will retain its qualities and will not be harmful. This rule is somehow connected with numerous idioms that have formed in different parts of the planet:

♥ ON TOPIC: Why is the wine dry, or which wines are called dry and which are sweet?

Does the Five Seconds Rule Work?

But scientists do not look at this phenomenon so cheerfully, showing their inherent meticulousness. So, in 2003, high school graduate Gillian Clark, practicing at the University of Illinois, decided to test the famous rule. For the experiment, samples were taken from the floor of the laboratory, dormitory, cafe. It turned out that the obtained samples did not contain a sufficient number of harmful bacteria. And a second test confirmed this information. Thus, dry floors are relatively safe when eating food that has fallen on them.

The student went further and decided to check the floor for bacterial contamination. On the smooth and rough surface, the researchers applied E. coli. And then they put food samples on the floor. Just a few seconds of contact with the surface was enough for the bacteria to migrate to the food. So the five-second rule turned out to be overturned.

But the study was not only about microbiology, but also about sociology. In the course of the survey, it turned out that 70% of women and 56% of men fully trust this rule and are ready to eat food that has fallen briefly on the floor. Not only do women believe more in the stereotype, but it also applies more often to sweets and cookies than to cauliflower or broccoli. Gillian Clarke’s work did not go unnoticed by the public, but was awarded the comic Shnobel Prize in Healthcare. 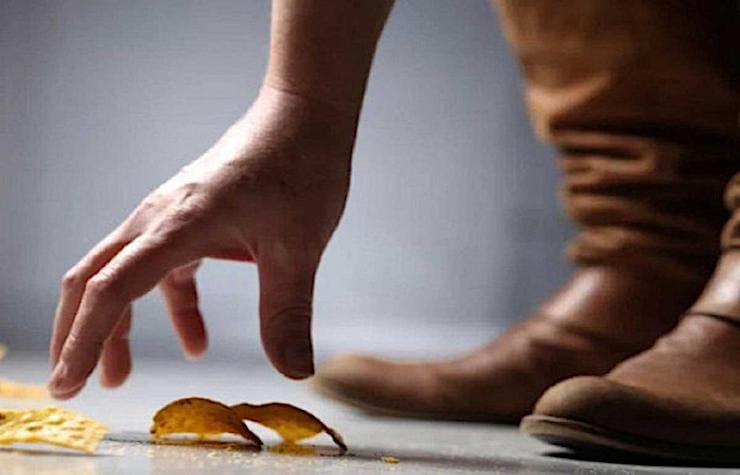 We decided to check the five-second rule and the Mythbusters from the Discovery Channel. Their findings generally confirmed Clarke’s findings. The time of contact with the surface has little effect on the degree of bacterial contamination; just a couple of seconds is enough for food to spoil.

But this issue still continues to concern the public. In 2016, another study was carried out. The specialists of the University of New Jersey shared their findings in the scientific publication “Applied and Environmental Microbiology”. Unsurprisingly, the five-second rule was again proven wrong. Nevertheless, the scientists emphasized that the speed of bacteria transfer to the fallen food still depends on its type, as well as on the type of surface. So in some combinations, food that has fallen to the ground can still be considered relatively harmless.

But it is perhaps too early to put an end to this interesting question. Indeed, in 2017, Professor Anthony Hilton from the University of Birmingham said that, of course, you should not eat food that has fallen on the floor if dirt or specks are clearly visible on it. But if there is no visible contamination on the food, then the chance of harmful bacteria getting into it in a few seconds is very small.

Supporters and opponents of this rule, as can be seen from the research, were divided into two considerable camps. At the same time, what is interesting, both those and others can rely on quite scientific research as an argument.