Much attention has always been paid to the confidentiality of communication, even in “live” conversations. But now, for conversations, we increasingly turn to messengers. Electronic tools make communication much easier by ignoring the distance between interlocutors. To increase the safety of communication, Instagram has a special mode with messages that disappear over time. You can communicate in this way both in private chats and in group chats. And here’s how to activate this feature or, conversely, opt out of using it on Instagram.

♥ BY THEME: Who has the most Instagram followers in 2021 – 40 most popular accounts.

The good thing about the confidential mode is that with it, messages will immediately disappear from history after the interlocutor has viewed them and closed the chat window. And in group correspondence, the message will remain visible until all participants in the conversation have read it, and until they leave the general chat. And only in this mode, you can respond to disappearing messages. If you switch the conversation mode to normal mode, then you will no longer see the old correspondence. But you can complain about disappearing messages, like ordinary ones, even if they are automatically deleted. 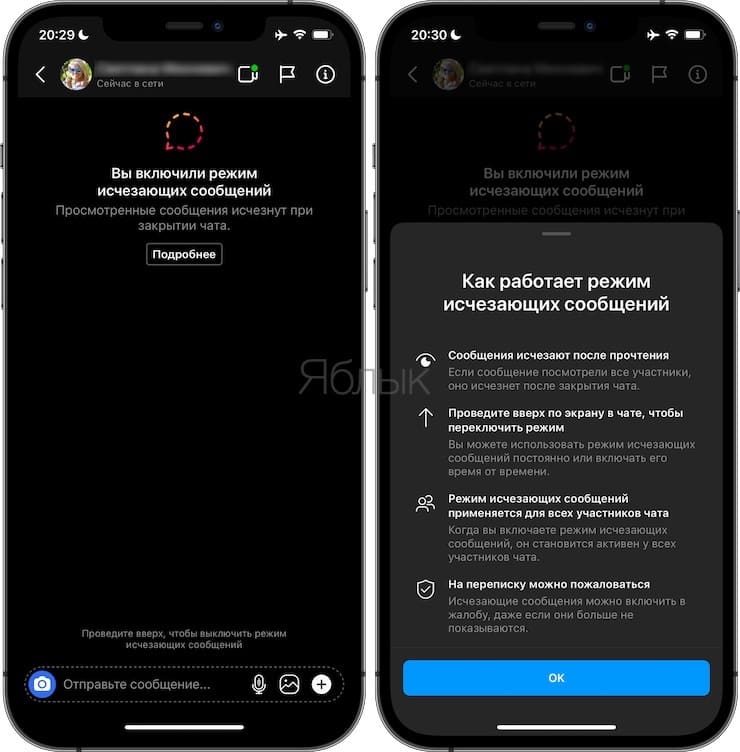 How to enable disappearing (self-deleting) messages mode on Instagram?

If you want to change the mode of entering messages in your chat for greater privacy, then you must enable this mode. This is easy to do. There are two ways.

Open the Instagram messenger, go to the desired chat and click on the button with the letter i in a circle. 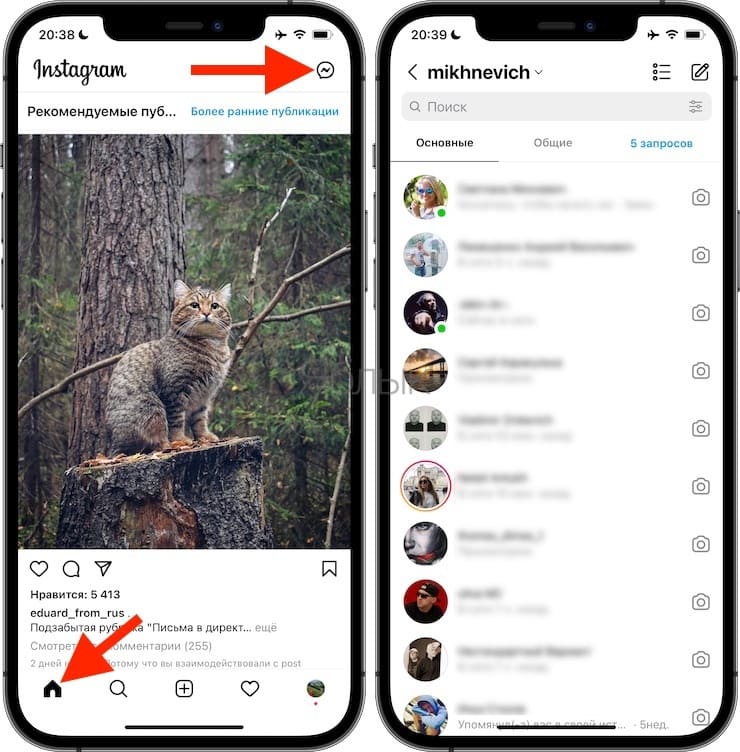 On the screen that appears, set the switch Disappearing messages mode into position Included… 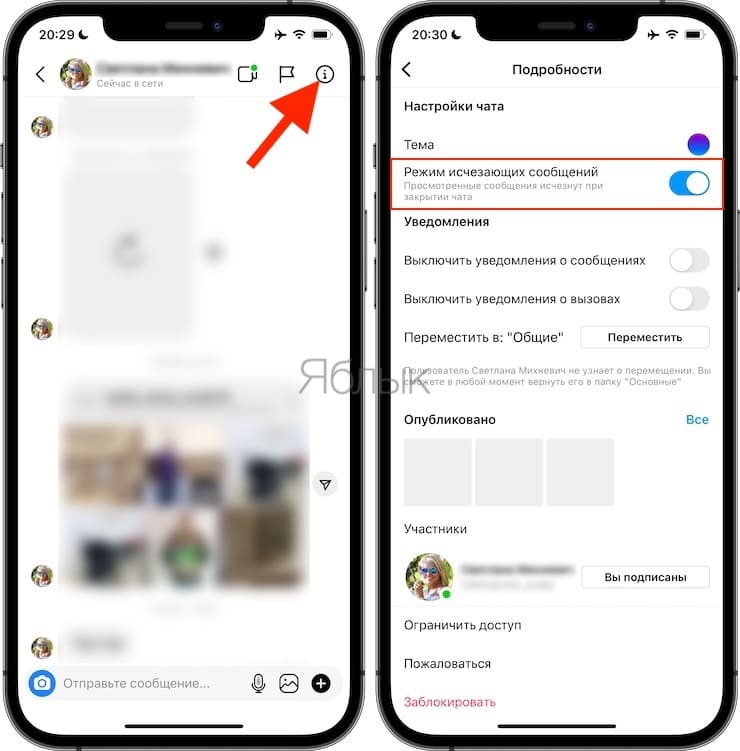 Method two – make a swipe (gesture) from the bottom up and wait until the gray ring at the bottom of the chat window turns blue. By changing the theme of the interface to black, you will understand that the desired function has been activated. 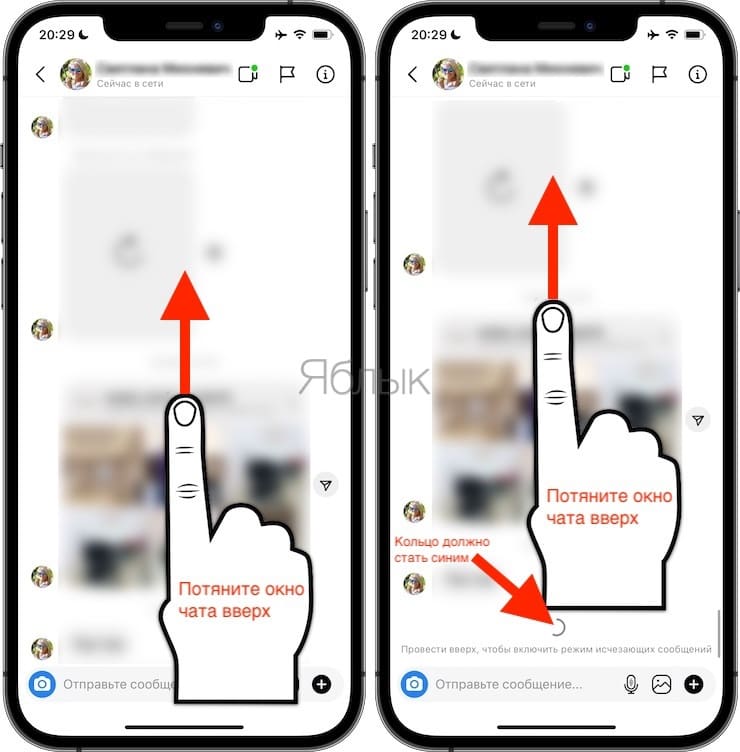 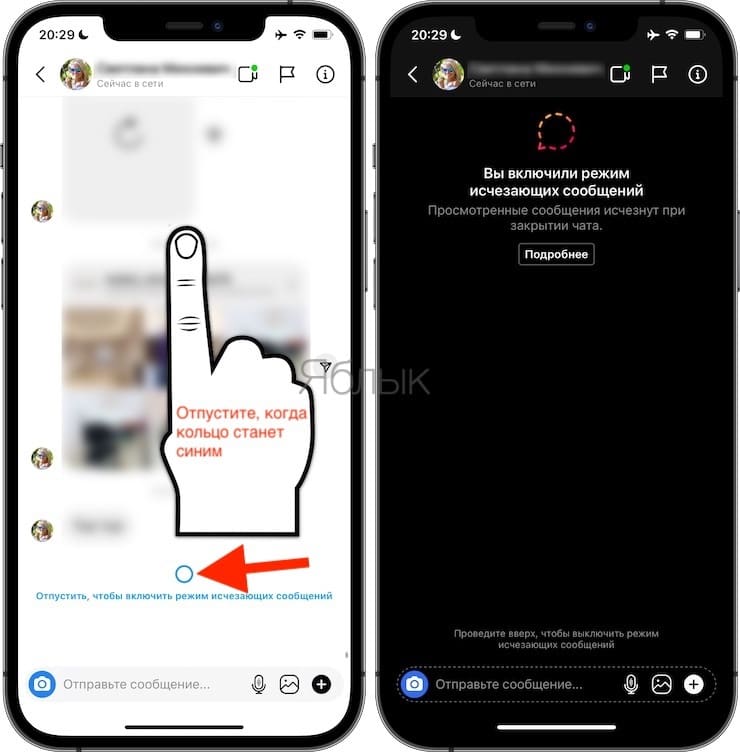 ♥ BY THEME: Invisible on Instagram, or how to watch when the user was online and how to turn it off.

To exit this mode, you can use a special switch (see above) or also pull the chat screen up. In fact, you need to repeat the previous steps in the opposite way. The design will change to the standard light one, thereby, Instagram will notify about its transition to the normal communication mode.

The messenger of any social network is an important tool for it, because it is with its help that users can communicate directly. That is why VKontakte pays such attention to the possibilities of sending messages. Now disappearing and silent messages appeared in the branded application. How it works?

♥ BY THEME: How can Vkontakte translate voice messages into text?

In their mobile app, users will be able to discover a couple of new types of apps: silent and disappearing. The peculiarity of disappearing messages is that after some time they disappear. This is very convenient for sending important and confidential data that should not be stored for a long time in chats, or for extraneous replies in professional chats.

The peculiarity of silent messages is that they come silently. This allows the recipient not to be distracted from important matters or from rest. Such messages can also be useful, with their help it is convenient to report unimportant matters and low-priority tasks. The recipient can deal with them when he finds at that time. To change from one view to another, you just need to hold down the send button – similar functionality is already available in Telegram. Users will not have to wait long for this feature to appear, it will appear within 24 hours.

How to send disappearing or silent Vkontakte messages?

In the pop-up menu that appears, select the type of message you want to send: Message without sound or Disappearing message… 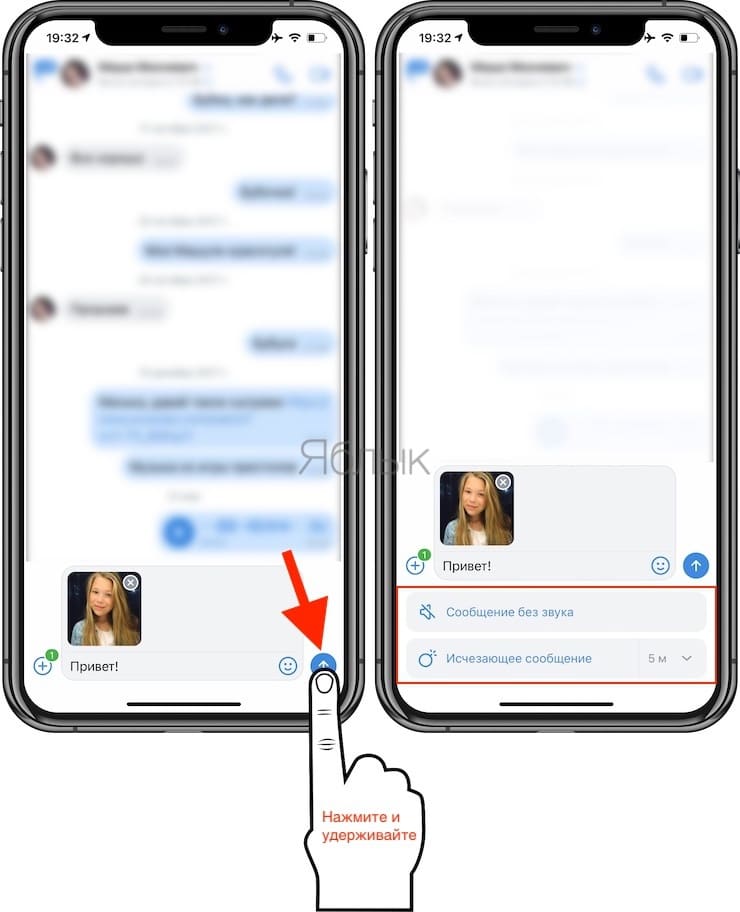 When sending, the opportunity to choose the time for the disappearance of the message is provided: it ranges from 15 seconds to 24 hours. 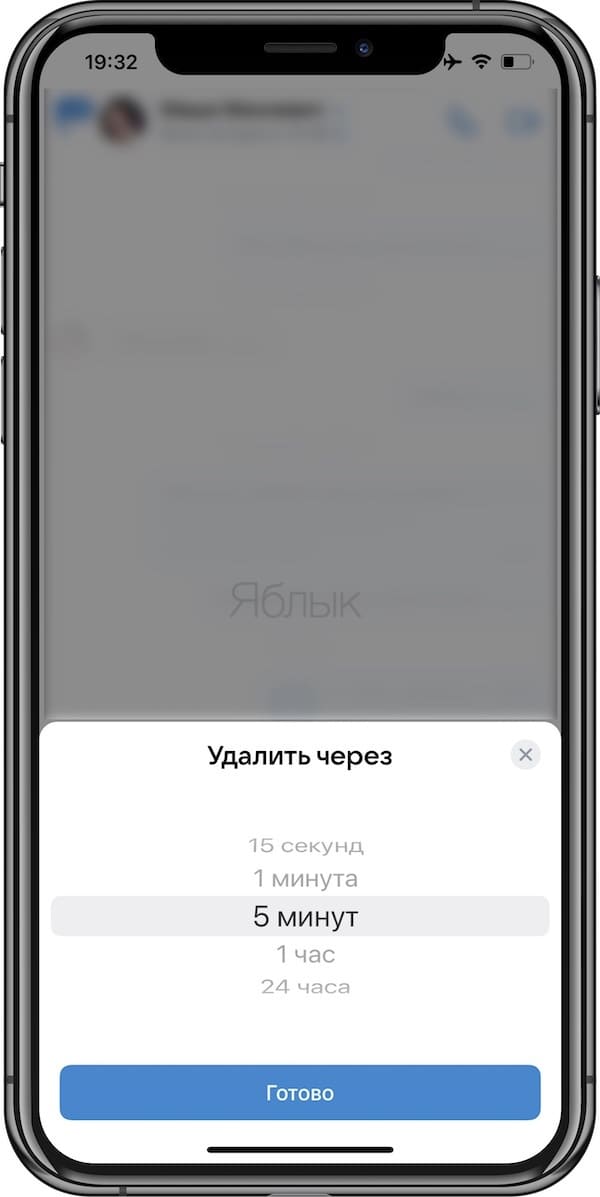 A disappearing message will be marked with a special icon in the chat. 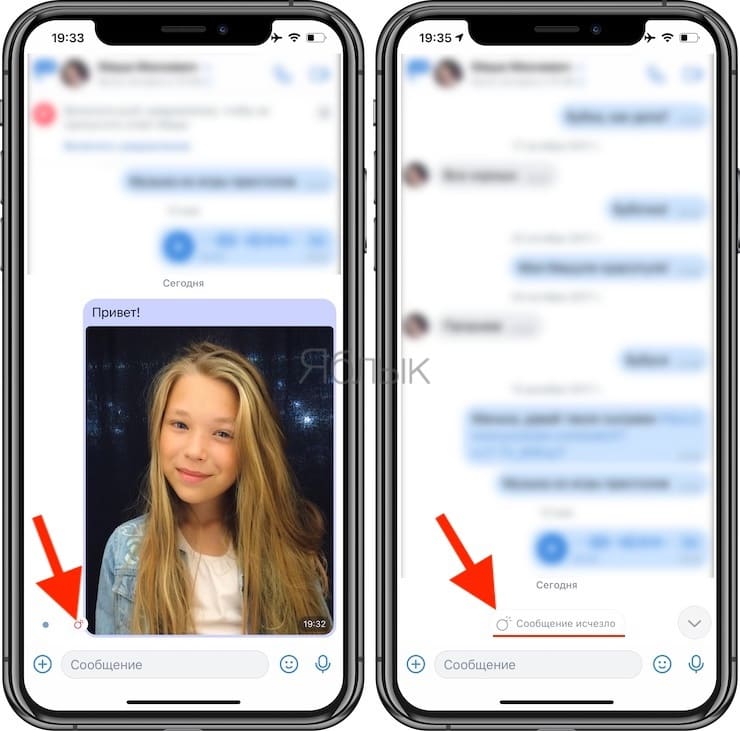 Probably not everyone knows that the official Viber app for iOS allows you to send disappearing (self-deleting) messages. They are automatically deleted after the specified time after viewing. In this article, we will tell you how to send such messages on iPhone and iPad.

♥ BY TOPIC: How to send and receive self-deleting messages in Telegram (text, photo or video).

Traditionally, Internet security has received a lot of attention. Viber, whose messenger is so popular in our country, did not stand aside. She tries to make communication between her users as safe as possible.

For example, back in 2015, the delete message feature was introduced, and end-to-end encryption has been activated by default since 2016. In 2017, the messenger received secret and hidden chats. These measures did not go unnoticed by users and experts, which is why Viber is considered one of the safest messengers. But it is constantly developing and improving, including in the field of security.

In the summer of 2020, Viber introduced a new feature – disappearing messages. The company has studied how secret chats are used in the messenger. It turned out that it is not quite convenient for users to start separate secret chats to communicate in private conversation with one person. I would like to have a secure channel personally for each interlocutor. That is why Viber has equipped regular private chats with some secret chat capabilities. They got self-destruct timers and the ability to disable screenshots.

A timer icon will appear in private chats. You can click on it and select the time interval after which all new messages that appear in the chat will be deleted.

♥ BY TOPIC: How to pin an entry in the header of a Viber group on an iPhone.

To send a secret message via Viber to an iPhone or iPad, limiting the viewing time of the message, you must follow these steps:

1. Start Viber and go to the desired chat.

3. Specify the desired time after which all new messages will be deleted – 10 seconds, 1 minute, 1 hour or 1 day. The timer activation will be indicated by the appearance of the corresponding system message in the chat.

4. Create (send) a message (text, photo, video or file). A timer will appear in the lower right corner of the message, which will start counting down after your interlocutor opens the chat and views the message.

When the timer is turned on, the function becomes active for both participants of the conversation at once. As soon as the set time interval ends, new messages in this chat will disappear forever.

After reading the disappearing message, the sender and recipient will not have any mention of sending / receiving such a message.

As soon as one of the participants in the conversation takes a screenshot of it, the second interlocutor immediately finds out about it. So do not cheat and try to copy the correspondence fraudulently.

5. In order to disable disappearing (self-deleting) messages, again click on the icon with the image of the clock and tap on the button Off…

♥ BY TOPIC: My Viber notes: how to store important information and quickly find it right in the messenger.