In the Middle Ages, the attitude towards death was not the same as it is today. People died much earlier, due to poor hygiene, lack of health care, wars or epidemics. The almighty church served as a bridge between earthly life and the afterlife, which was always somewhere nearby. It is no coincidence that the phrase in Latin Memento mori or “remember death” has become a catch phrase. She became a kind of motto for an entire era. But those days, fortunately, are long gone. Today, the attitude towards death is completely different. And the evidence from that era today may seem wild, or at least very strange.

A very interesting object is located in the Czech town of Kutná Hora. There is a small chapel, which, it would seem, is nothing special in appearance and should not attract. Only here every year up to 500 thousand tourists come here. The fact is that this church is one of the main attractions of the country. And its peculiarity is in a very distinctive interior. It is made entirely of human bones. To many, this may seem like an outrage against the dead. But at one time such an approach seemed very practical and there was nothing seditious about it.

♥ ON TOPIC: Lincoln and Kennedy: Mystical Coincidences from the Life of US Presidents. 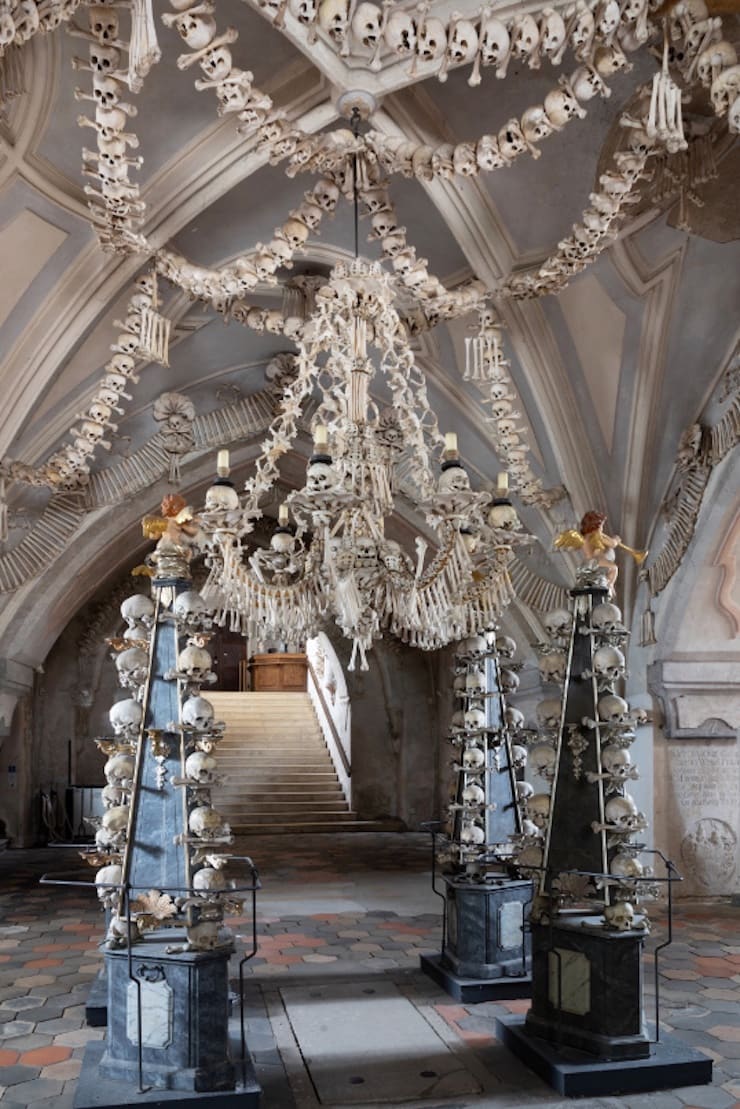 The tourist site is most often called simply the Ossuary, although its official name is the Church of All Saints. The short name appeared as a literal translation of the Latin “ossuary”. This term Catholics called a certain room or volume for storing human remains that have turned into skeletons. When we speak of “volume,” we mean a small box. The premises can be a whole building, as is the case with the church in Kutná Hora. 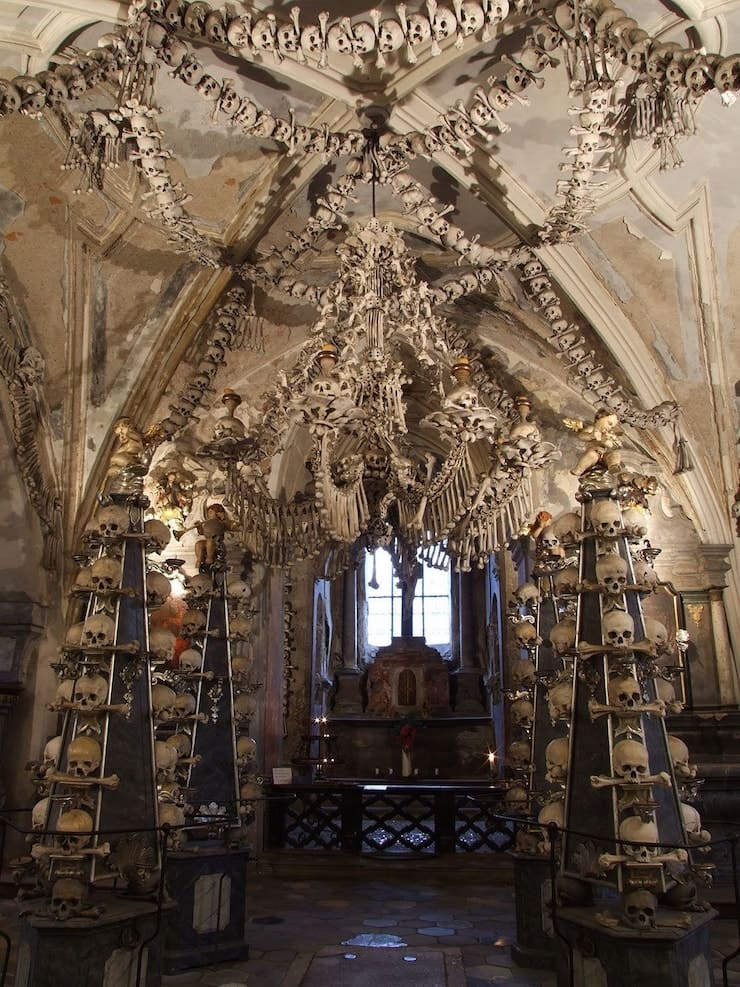 Everything inside the room is trimmed with human bones. They decorate not only the walls, but even the ceiling. The chandelier-chandelier is a kind of work of memorial art, it is also made of bones and skulls. They also form arches and pyramids. And even the coat of arms of the former owners of the temple is also made of human material. 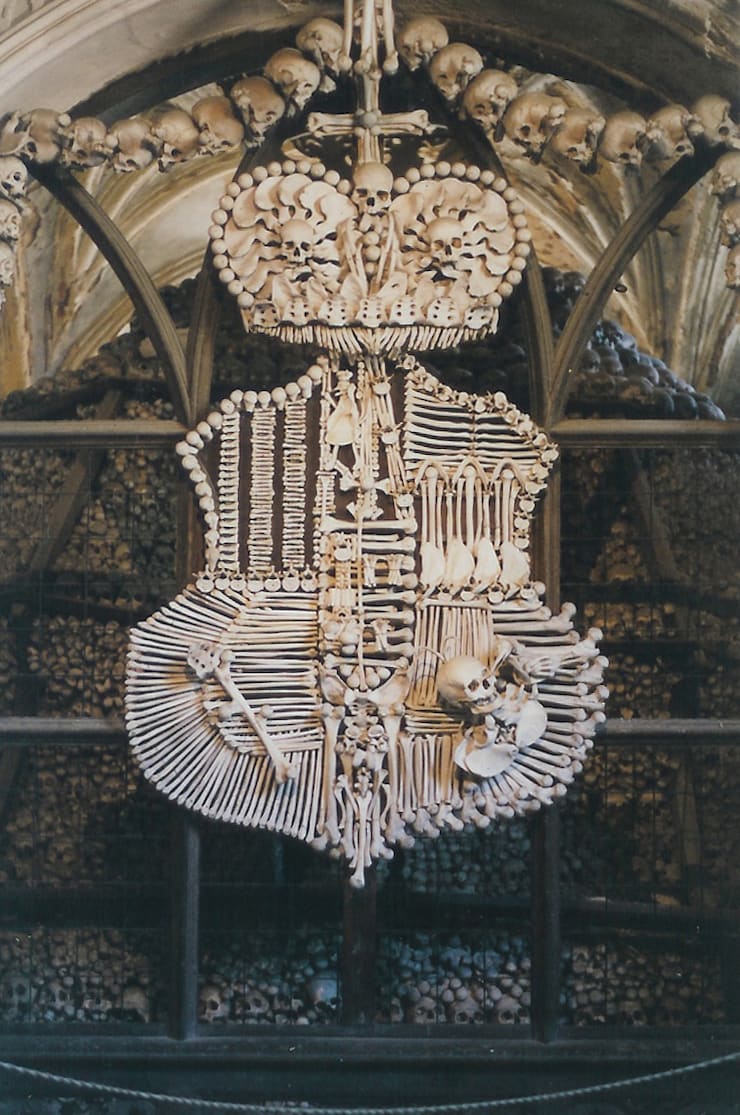 In total, the remains of tens of thousands of people were used to decorate the Ossuary; 60 thousand are officially announced. These people died centuries ago, which helps to make the internal appearance more original than creepy and frightening. Once such objects were considered natural, so the church in Kutná Hora is far from the only example of an ossuary, although it is perhaps the most famous of the rest. 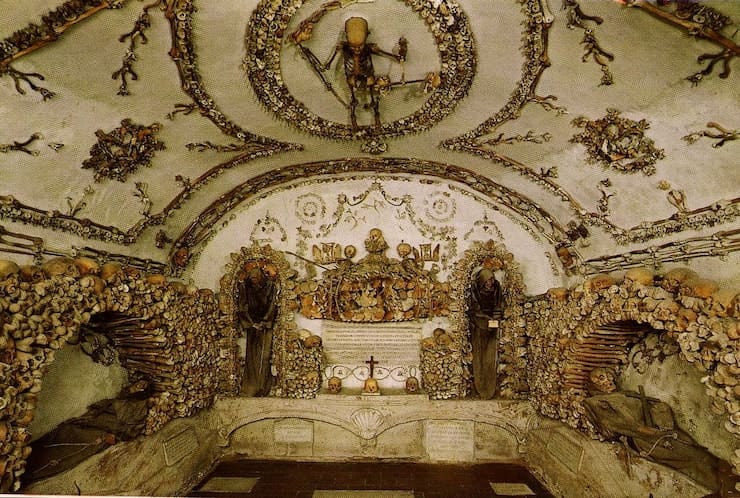 The beginning of the tradition

Researchers are quite clear about where this strange tradition came from in Europe. It all started with the Roman church of Santa Maria della Conchezione on Via Veneto. The building was built in 1631 by the Capuchin monks. The remains of the deceased brothers from the old cemetery were immediately transferred to the new ossuary. The Capuchins mainly decorated the walls of the underground crypt with bones. And the new dead were first buried in the walls or traditionally in the ground, and after 30 years exhumation was carried out, and the remains were used to further decorate the tomb. And in the vacant place they put a new deceased. So six chapels formed a whole necropolis, which was decorated with the remains of 4 thousand people. 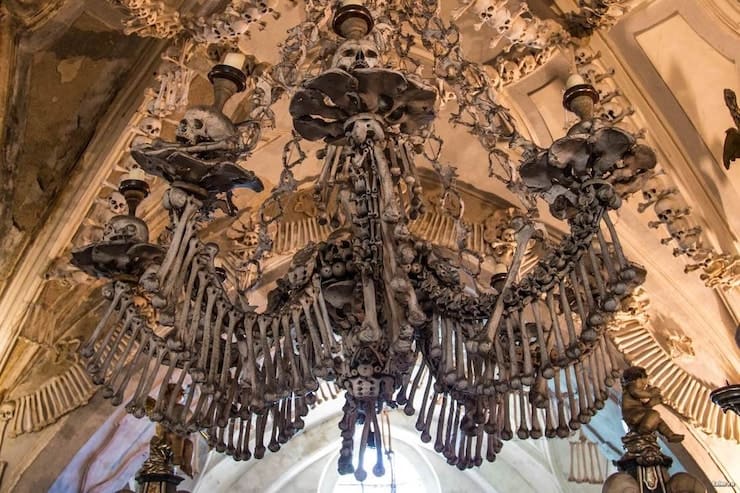 This format has become an example for other ossuaries as well. Famous Capella dos Ossos or “Chapel of Bones” in Evora, Portugal, as well as the “Chapel of Skulls” in Kudowa-Zdroj, Poland. Moreover, the creators of such gloomy places also decorate them with very profound maxims. In the same Portugal on the walls you can read the following: “Better a day of death than a birthday” or “We, who are here, are waiting for you.”

Formation of a cult of death 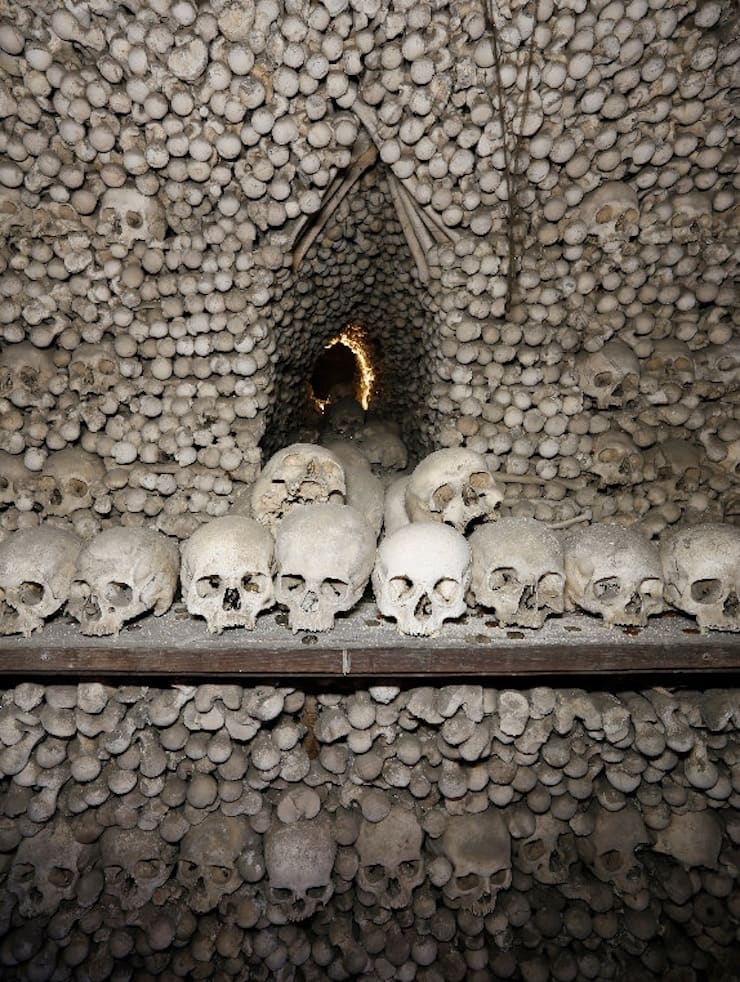 The Church does not see this as sacrilege. At the time of the popularity of the ossuaries, the attitude towards death was different. Epidemics mowed down cities and countries, people were constantly at war with each other. Against this background, thoughts about the afterlife even somehow reassured, because it promised deliverance from the torment of a difficult life. The monks, which is understandable, had a lot of time to think about this topic. And creating such decorations from bones, they reminded themselves and the pilgrims of the transience of our life, of the need to accustom ourselves to the thought of death, which will give long-awaited relief.

And the fashion for various decorations and decorations associated with death and its symbols has been formed in Europe since the middle of the XIV century. Then a plague epidemic swept across the continent, destroying half of the population. This theme is reflected in interior design as well. In the Middle Ages, it seemed natural, although today it looks wild.

The history of the Ossuary can be traced back to 1278, when Abbot Heinrich from the Cistercian monastery of the Czech Sedlec visited the Holy Land. From there the pilgrim managed to return home safely, bringing with him some Jerusalem clay. He scattered the earth from the holy city across the local cemetery. The locals immediately desired to be buried in this very place. The cemetery quickly became popular not only in the vicinity, but throughout Central Europe. Rich people even offered money for the opportunity to rest in the holy land. It is quite logical that the necropolis soon overflowed. But the monks could no longer stop the flow of those who wanted to. They came up with the idea of ​​exhuming old corpses and putting them in the script of the cemetery chapel, thereby freeing up space for new burials. So many bones have accumulated in the ossuary. 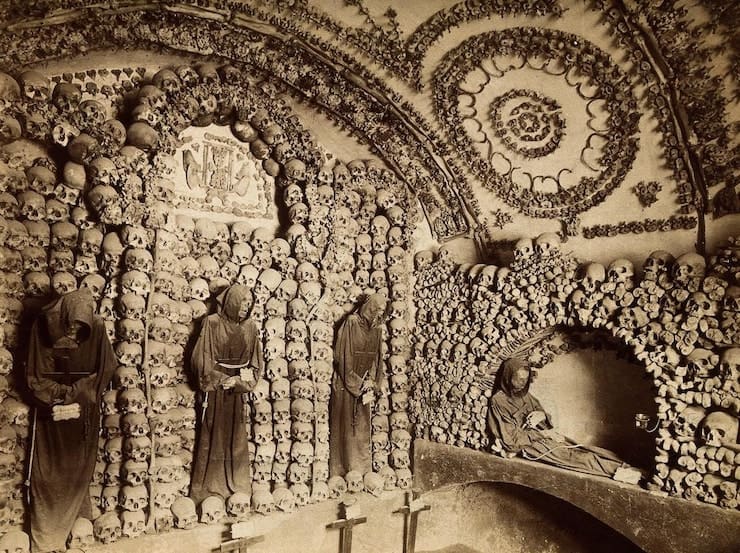 And there is an explanation for the fact that people were attracted by the clay brought from Jerusalem. The fact is that it was brought from Akeldam itself, the “field of blood” in East Jerusalem. In the Christian tradition, this place is directly related to the betrayal committed by Judas Iscariot in relation to Jesus. The disciple tried to return the thirty pieces of silver he had received to the high priests. But the churchmen refused to put money in their treasury, because they began to be considered bloody. These funds were used to purchase land. There they began to bury free of charge, first, ordinary pilgrims, and then Christian pilgrims who died in Jerusalem. It was believed that the body buried in this land disintegrated in a day, which allowed the necropolis not to overflow. True, in reality the monks simply did not bury the corpses, and when the bodies decayed, the bones were transferred to a special storage. But clay from this area began to be considered sacred, pilgrims often took the earth with them, scattering it in their cemeteries. 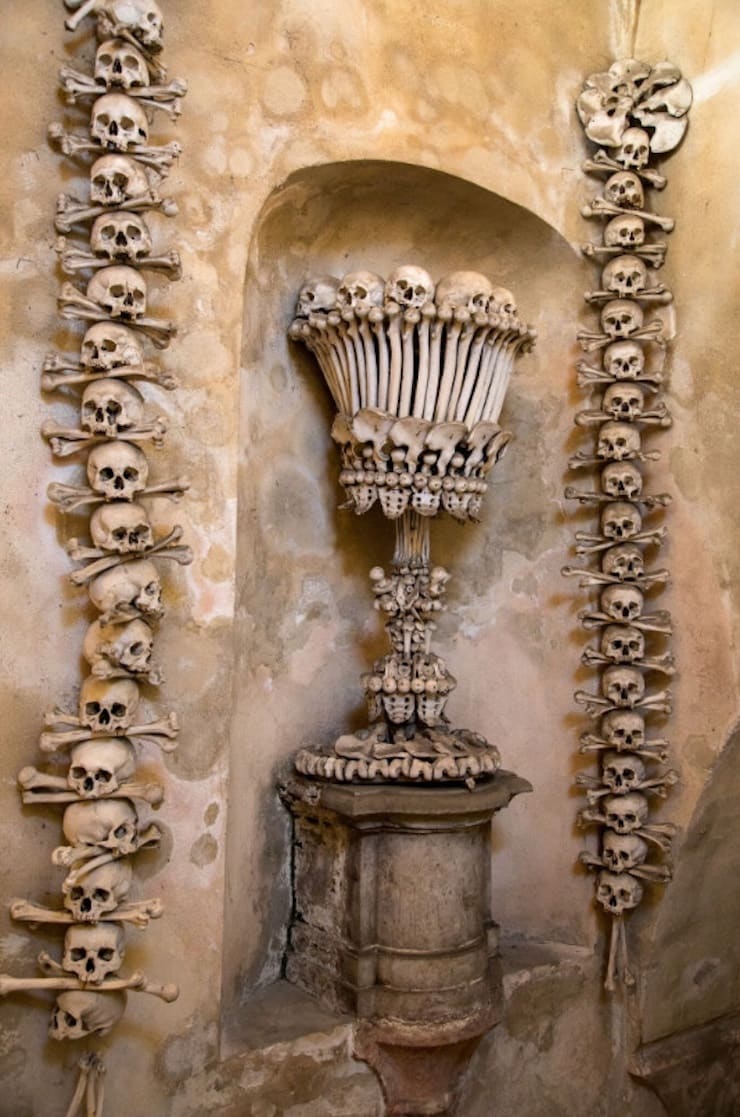 The Ossuary and its interesting history invariably attract thousands of tourists to Kutná Hora. You can get to the chapel itself only for a fee, but since 2020, it is forbidden to photograph interiors without a good reason. The Catholic parish, to which the church belongs, still reminds of the need to honor the memory of all those buried in the building, even if the remains serve as decorations or even serve as part of a chandelier.

But Kutná Hora is interesting not only for its Kostnitsa located on the outskirts. The town is home to a little more than 20 thousand people, but once it was the second richest city in the Czech Republic after Prague. In the surrounding mines, silver was mined, almost a third of all European. Not surprisingly, the locals got rich. And now the historical center of Kutná Hora and some objects on the outskirts, like Kostnica, are included in the UNESCO World Heritage List.