A lot of potentially good shots were ruined just because the photographer was looking at the subject from above, could not align the image, and as a result, the photo turned out to be “skewed”. Let’s solve this problem once and for all! And it is not a cool “tripod” that will help us with this, but a little-known camera setting in iOS.

♥ ON TOPIC: How to automatically improve photo quality on iPhone and iPad…

1. Open the app Settings on iPhone.

2. Find (in the list or through the search) the section Camera…

3. Activate the switch opposite the inscription Net… 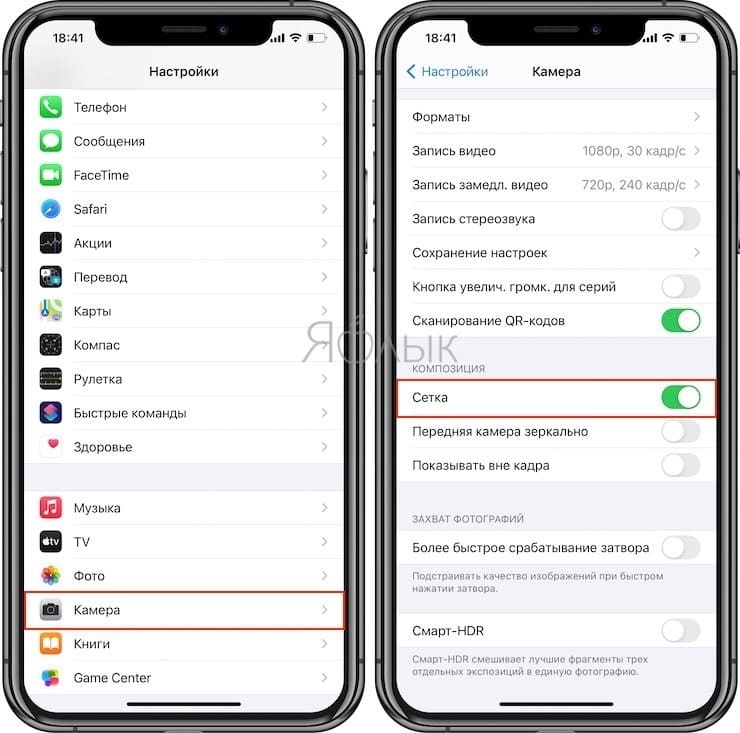 Now, every time you turn on the camera and hold the smartphone in a horizontal position, a special grid-level will be displayed on the screen.

6. Point your iPhone down at what you will be filming. A grid and two crosshairs will appear on the screen.

7. Align the crosshairs – and get a perfectly straight shot. 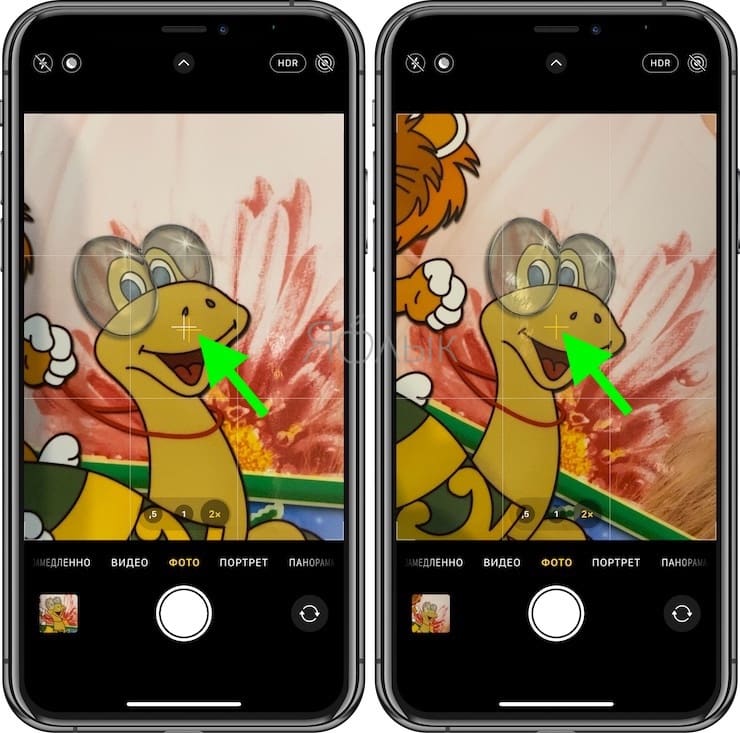 Done – you have a perfectly symmetrical photo!

But still, if you need to make a high-quality copy of a document lying on the table, iOS has a special built-in scanner (in detail).

Who among us in childhood did not like fairy tales? After all, it was so pleasant, especially falling asleep, to plunge into a world full of magic, heroes and villains. The narrative flowed in a soft, continuous river, in which unusual, but bright words were encountered. They helped to create the feeling of something unusual.

Having already matured, we begin to think about the essence of these words. Why did the hut stand on chicken legs, what are the bottom-holes and why some Finist was nicknamed the Clear Falcon. Words well known to us from childhood, it turns out, have a very definite and not always known meaning to us.

♥ BY THEME: Why do dogs tilt their heads when a person talks to them? 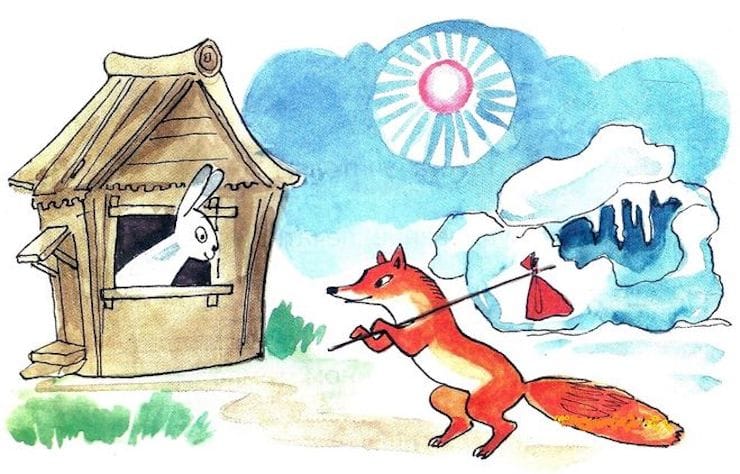 It is quite obvious that the hut is made of bast. But what is it? Explanatory Dictionary edited by A.S. Kuznetsova gives several meanings to the word “bast”.

1. This is the name of the fibrous tissue of plants through which organic substances move.

2. It can be the inner part of the bark of young deciduous plants, mainly linden, or a strip of bark, a piece of it. Bast is used in the production of baskets, ropes and boxes.

3. Bast may be a fibrous fabric made from flax or hemp used for making yarn. Hence the appearance of the word “splint”.

Thus, the “bast hut” was actually made of bark. 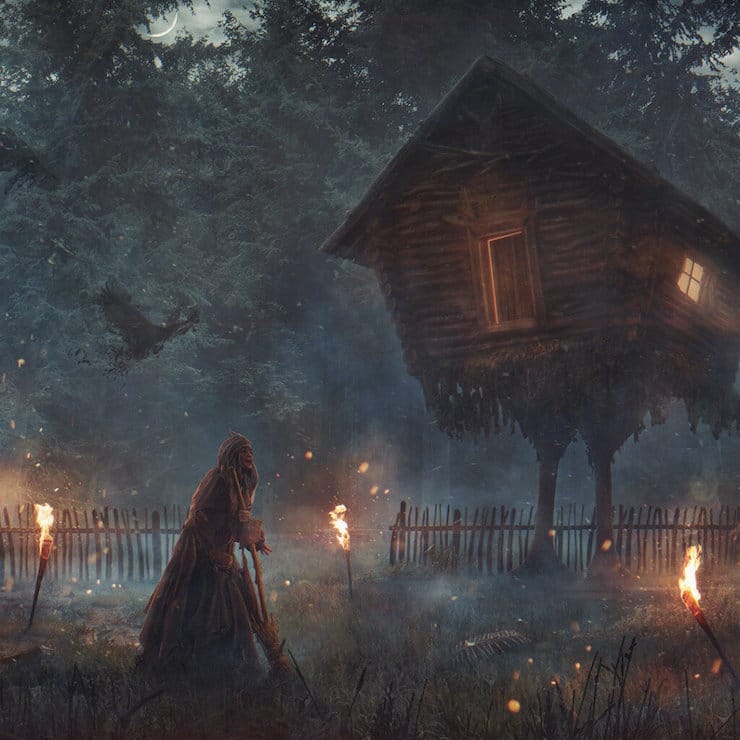 Does it not seem strange to you that the legs of the hut were not chicken, but chicken? It turns out that this attribute has a rather distant relationship to poultry. According to the interpretation in Dahl’s dictionary – “kur” represents rafters on peasant huts, a kind of stands. In swampy areas, huts were often placed on such “legs” so that the tree did not rot and dampness did not spread inside.

And according to another version, the phrase “chicken legs” comes from the name of “chicken” poles, or fumigated with smoke. At one time, back in the 6th-9th centuries, the Slavic peoples installed “death huts” on them – small log cabins with the ashes of the deceased inside. This is due to burial rites. This version is supported by the fact of living in the hut of Baba Yaga, which was on the border of two worlds: ours and the otherworldly.

♥ BY THEME: How to pronounce Xiaomi in Russian and what does this word mean. 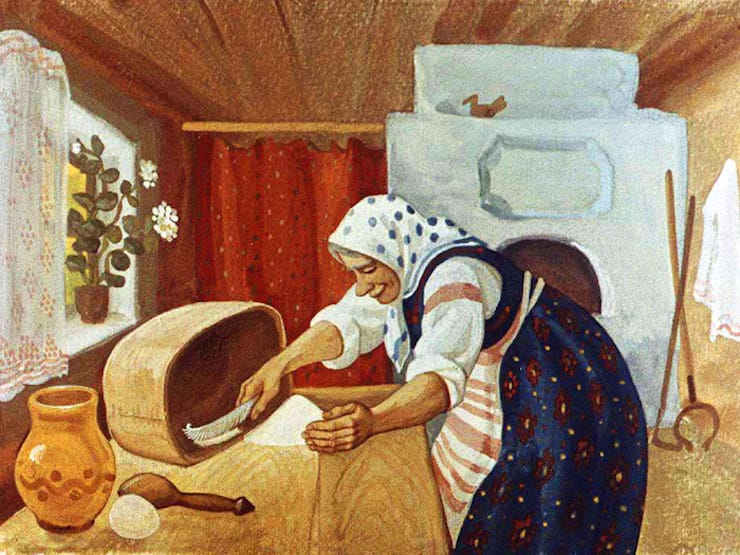 Remember what the grandmother scraped in search of flour for baking Kolobok? “Suseki” seems like a primordially Russian, simple and familiar word. In fact, it means some bins – fenced off places in a barn or storage for pouring grain or flour. In his dictionary, M.R. Fasmer points out that the word comes from the verb “cut” or “cut”. “Suseki” are formed with the help of some ancient prefix “su” and the root “sec”. 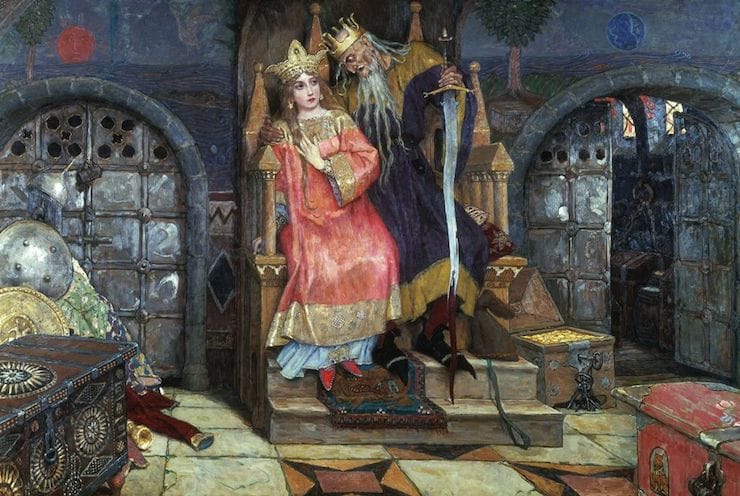 With this hero, ambiguities usually do not arise, only you still need to find out the correct spelling of the word: Kaschey or Koschey. Dictionaries also do not add clarity, considering both options to be correct. It is necessary to understand from what exact word the name of the canonical fairytale villain is formed. In the etymological dictionary of Max Vasmer, the words “koschey” are associated with the name of a very thin person, from the word “bone”. It is no coincidence that the villain is presented as very thin and emaciated, combining this with the anger and greed of a fairy-tale character.

There are other words related to the name that well emphasize its essence. So, “kosh” is called a purse, basket, box and even a chest, because it is above its contents that Kashchei withers. You can consider this word derived from “blasphemer”. This was the name of a person engaged in magical actions. It is interesting that in the “Dictionary of Russian Argo” by Vladimir Elistratov you can find the word “Koscheevna”. But this is not Kashchei’s wife at all, but just an evil and ugly woman. 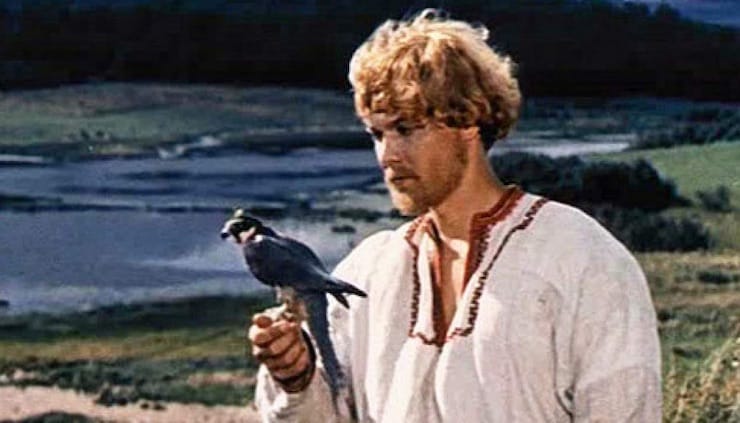 The name Finist sounds beautiful, but it is difficult to call him natively Russian. Where did it come from in our fairy tales? Folklore scholars believe that Finist’s name is a distorted Greek “phoenix.” This is a magic bird that is reborn from the ashes. In Russia, the word was transformed first into “finis”, and then into “finist”. It remains to be understood what Sokol has to do with it. Apparently this name arose under the influence of metaphor. The groom was called a falcon in Slavic wedding songs.

♥ BY THEME: What is Carat? How to determine the weight of a gem and the fineness of gold in carats. 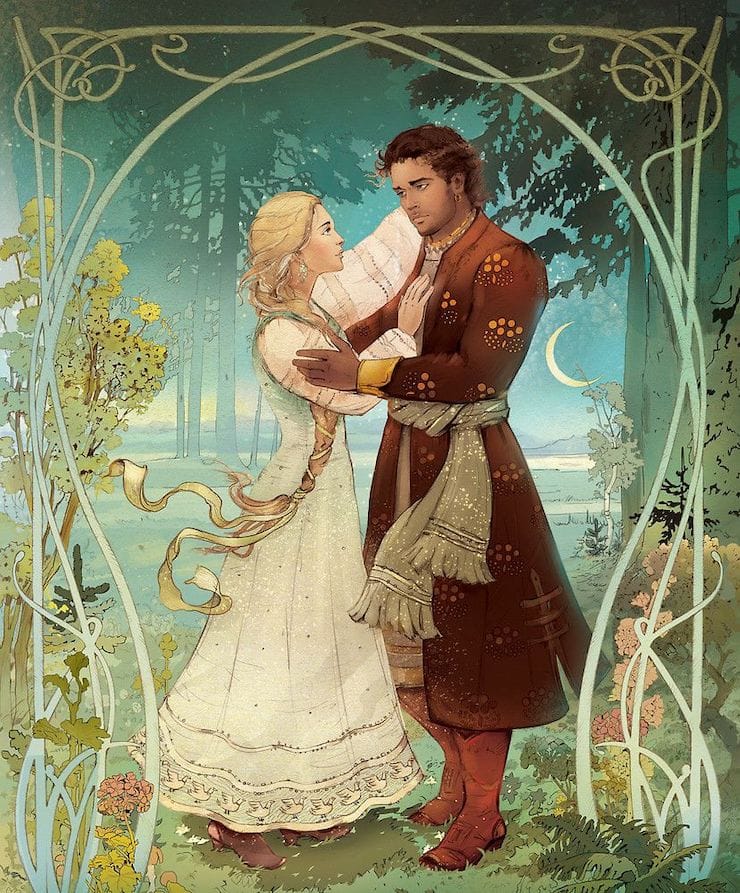 This name is rather strange and certainly not like anything else. But he was named after one of the Russian folk tales, and besides, this is the name of one of the characters in the play “Snow Maiden” by AN. Ostrovsky. The merchant Mizgir fell so in love with the snowy beauty that he forgot about his bride Kupava. There is a fairly clear interpretation of the word “misgir” in Dahl’s dictionary. This is a very dangerous and poisonous spider. The word also has other meanings: fly-tip, weak. In Russia, they even said: “You kill a misgir – you will fulfill forty sins”, “Confused that the misgir is in the snare”, “Fear, midges, Mr. honest, fat misgir!”.

♥ BY THEME: Stereo 3D images: How to create online for free without special programs and skills. 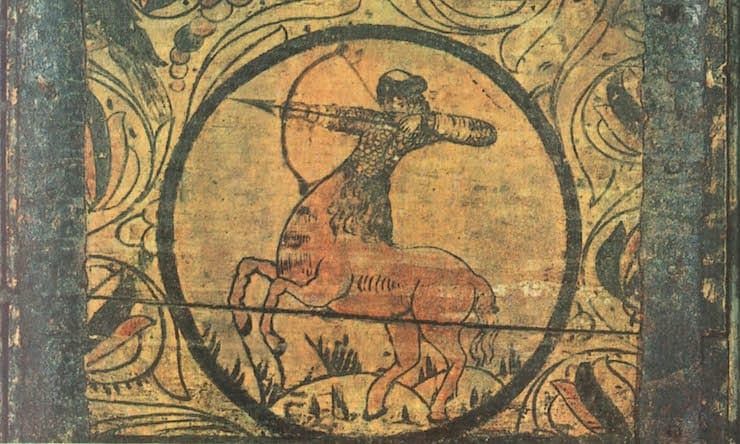 There are many dogs and heroes with this name in fairy tales. And although the word seems to be Russian, its roots are actually Italian! In the etymological dictionary of M.R. Vasmera speaks of Italian roots – “Pulicane”. That was the name of the character of the knightly novel, Andrea da Barberino, “The Kings of the Frankish.” And in the Tale of “The King’s Bove” Polkan appears as a knight with the body of a dog and a human torso. Polkan is a Russian centaur, half-dog, a dog-headed monster, a hero-dog. And the image of a half-horse or centaur appeared in folklore due to the similarity of the word cane (dog) and a horse.

A lot of potentially good shots were ruined only due to the fact that the photographer was looking at the subject from above, could not align the image, and as a result the photo turned out to be “skewed”. Let’s solve this problem once and for all! And it’s not a cool “tripod” that will help us in this, but a little-known camera setup in iOS.

♥ BY TOPIC: How to automatically improve photo quality on iPhone and iPad.

1. Open the application Settings on iPhone with iOS 11 or later.

2. Find (in the list or through the search) the section Camera.

3. Activate the half-bar opposite the inscription Grid.

Now, every time you turn on the camera and hold the smartphone in a horizontal position, a special marking grid-level will be displayed on the screen.

4. Exit the application Settings and run The camera.

6. Point your iPhone down at what you shoot. A grid and two crosshairs appear on the screen.

7. Align the crosshairs to get a perfectly even shot.

Done – you have a perfectly symmetrical photo! Life hack: it helps a lot when there is no scanner at hand, and you want to make a high-quality copy of the document lying on the table.