Review of the game Darkest Dungeon for iPad: Journey of Mad Thugs through Lovecraft’s Nightmare 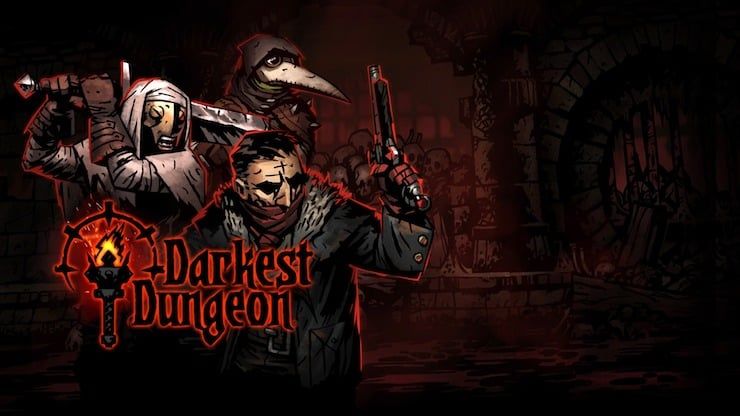 At first glance, Darkest Dungeon for iPad may seem like the most ordinary work of art in the RPG genre with the addition of roguelike elements, but if you do not abandon the game at the very beginning, then soon the user will begin to discover all the advantages of this project.

An unusual system of battles, the dependence of what is happening on the psychological mood of the characters and an ominous otherworldly Lovecraft atmosphere – this would already be enough to interest an experienced player. But the matter is not limited to the listed advantages. 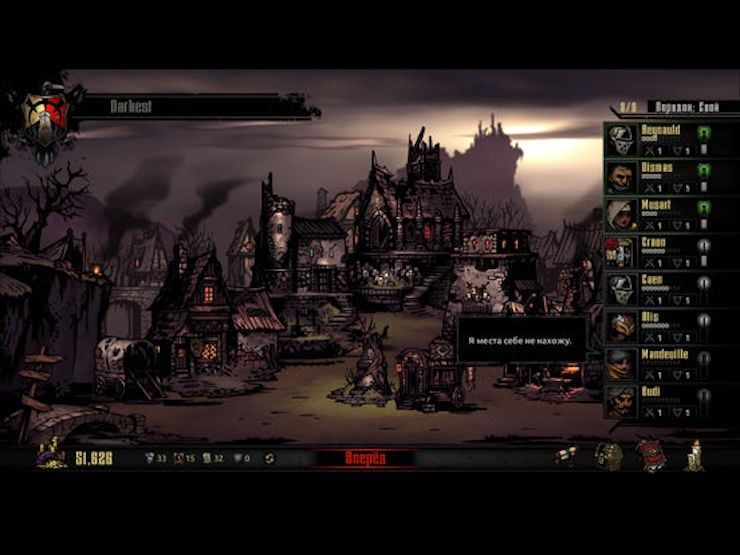 The plot background of Darkest Dungeon begins with an acquaintance with the estate belonging to the protagonist. Under the old mansion there are uncharted catacombs, in which, according to legend, there is something that can answer all questions. A long time ago, the ancestor of our hero tried his luck in receiving these answers, but his expedition turned into a clouding of mind for him. He bequeathed to his descendants to try to destroy the evil forces that ruined his mind and life, and now, years later, the current owner of the old dilapidated estate decides to descend into the gloomy catacombs. He recruits a team of thugs and goes to explore the dungeon. 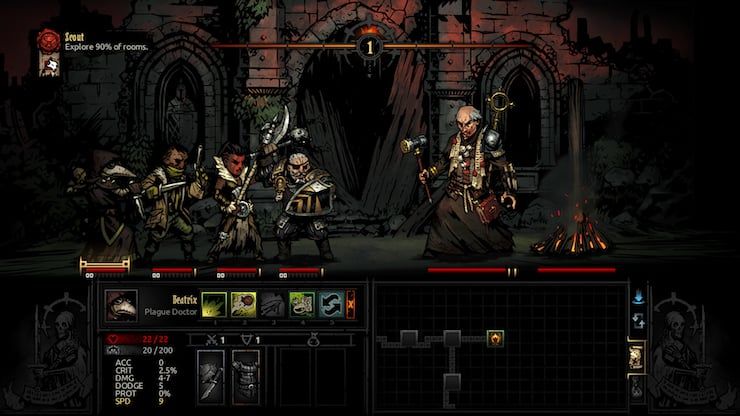 Our expedition is divided into five maps, each of which is formed at random. Locations contain corridors and rooms in which the hero and his team can both engage in a fight with enemies and profit from the treasures found. Characters move in only two directions: left to right and right to left. It would seem that what can be played here, but, as already noted above, it is worth showing a little patience in order to feel the whole point of the game and get involved in the process. 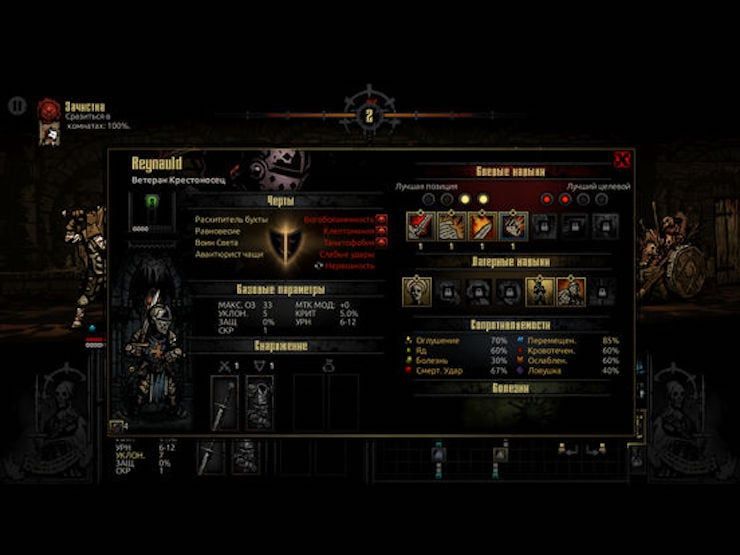 So, soon the user will discover a fascinating and unusual combat system, which, in addition to many familiar factors, also takes into account the location of the character. It depends on the position of the hero whether he can use his skills or whether he will be completely useless in battle. Thus, the user will have to puzzle over the correct arrangement of characters, on which the outcome of the brawl will often depend. At the same time, enemies will come across on the way, which are capable of displacing our heroes, breaking the entire system and reducing the effectiveness of both the attack and the defense of the units. In such cases, you will have to re-add the team combat puzzle as quickly as possible so as not to lose the characters. 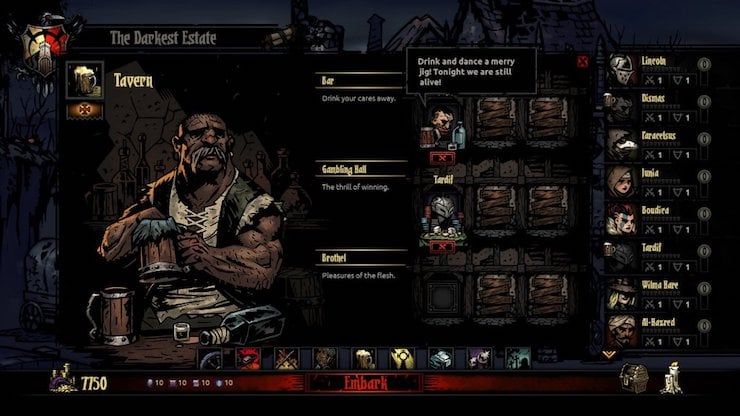 The plot, gameplay and visuals of the Darkest Dungeon project are imbued with the atmosphere of a nightmare. Heroes, encountering otherworldly forces in the dungeon, gradually go crazy and may even die from stress at the most inconvenient moment. The encounter with evil affects the characters also by the fact that they acquire not the best qualities. For example, the hero, after experiencing stress, may become a masochist and refuse treatment. Or one of the team members suddenly becomes overly aggressive and may attack their own. There are many options and they all affect the management of the squad. 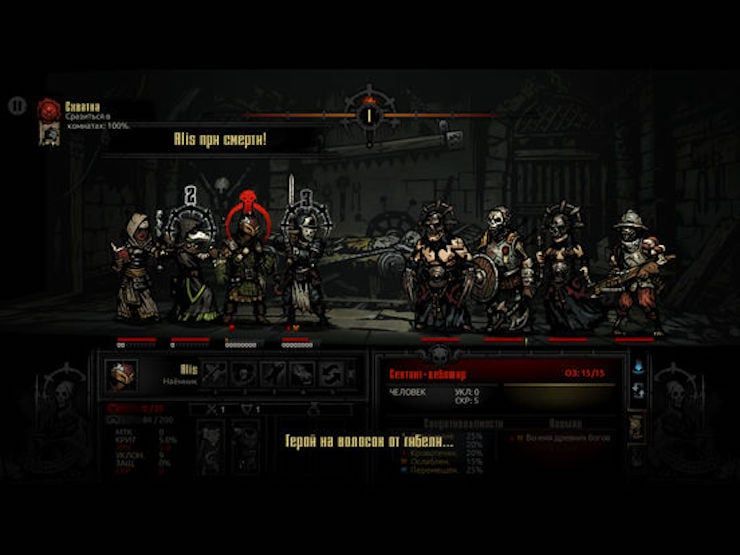 To prevent the characters from going completely crazy and not dying of heart attacks, it is necessary to get out of the catacombs from time to time and drive units, depending on their preferences, to a pub, brothel or church. If someone from the team has serious head problems, he can be sent to a mental hospital for treatment – there he will lie down for a week, after which he will be released almost healthy. And while the squad is trying to come to their senses, we will need to recruit new people and again lead them to the catacombs. After several such visits, we will have a whole army of thugs sick on the head, each of which has its own unique story, organically fitting into the general atmosphere of madness. 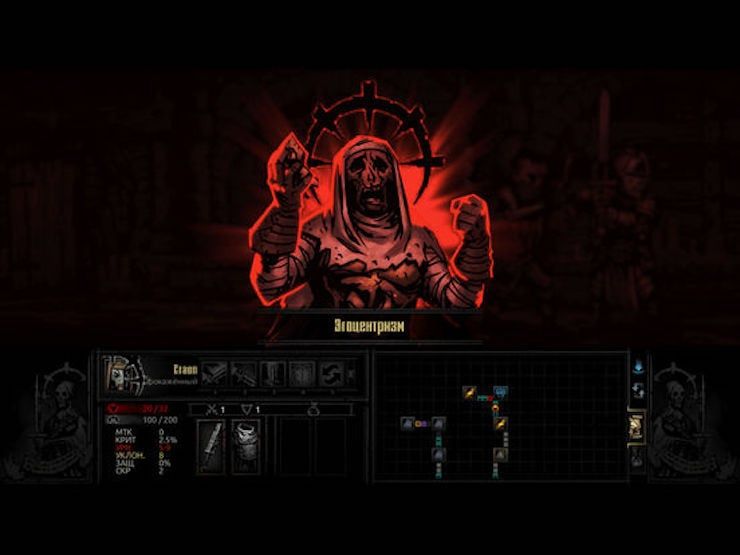 Before each sortie, you should stock up on all the necessary items, otherwise the team will not be able to survive. A forgotten torch or bandages can destroy the entire squad, even in simple locations. Although there is no need to talk about simplicity here, because the developers themselves warn that in order to achieve the goal, you will have to make every effort and sacrifice not one of your favorite heroes. The outcome of expeditions will depend on the equipment, the alignment of forces, the satiety and fatigue of the characters, the level of their stress and mental characteristics. All this taken together is not so easy to control, and besides the usual skirmishes, the game also contains bosses. But in Darkest Dungeon there are no insurmountable difficulties, you just need to think carefully about your every step, take your time, and everything will work out. 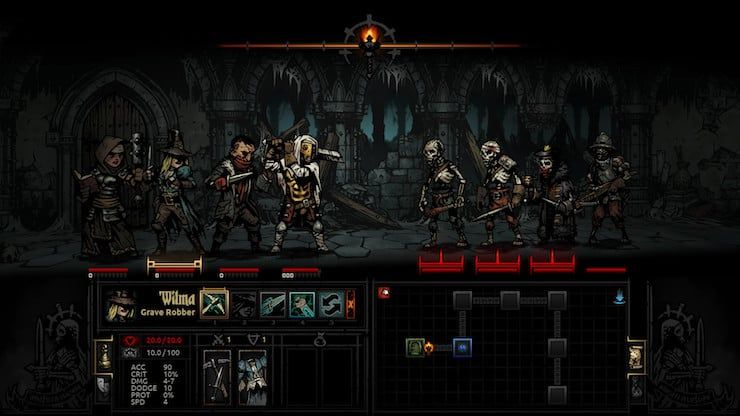 Of the minuses, and even then subjective, we can only name the laborious “pumping” of the characters. For the sake of their upgrade, some players may have to return to the passed locations and fight the same enemies over and over again. But the pluses far outweigh some of the protractedness of the project, and the unique atmosphere even compensates for all the roughness.

Kenshō review for iPhone, iPad, Apple TV and Mac – an extraordinary adventure in a surreal world where nature, time and space intertwine
At the first glance at the trailer for the atmospheric
06

IOS 15 Review: 50 Most Important Tips
This is not to say that Apple surprised everyone.
09

Hidden calculator, or how to use Siri to solve examples on iPhone and iPad
The voice assistant Siri is well known to iPhone and
011

How to take a screenshot on a Windows computer: 4 ways + the best programs to take screenshots
Windows users are well aware that there is a Print
011

iMessage and SMS: why are iPhone messages blue or green?
Many iPhone owners regularly face the problem of separating
010

Can I charge my iPhone or iPad with a MacBook Pro (30W or more)
What if you want to get the fastest charging for your
09
This website uses cookies to improve your experience. We'll assume you're ok with this, but you can opt-out if you wish. Cookie settingsACCEPT
Privacy & Cookies Policy