Moshi does not produce many accessories, but they stand out noticeably against the background of their faceless Chinese counterparts. These products are always in demand both at home and in the office, as well as on a walk or trip. Moshi accessories are distinguished by quality and ergonomics, which makes you pay attention to them. There are not many manufacturers on the market who are trying to rethink the algorithms for working with Apple technology.

Not so long ago, we already talked about wireless charging for two devices, a functional docking station and other devices from this manufacturer. This time we will talk about a compact foldable charger for Apple Watch – Moshi Flekto. I must say that the form factor of the accessory is very unusual. 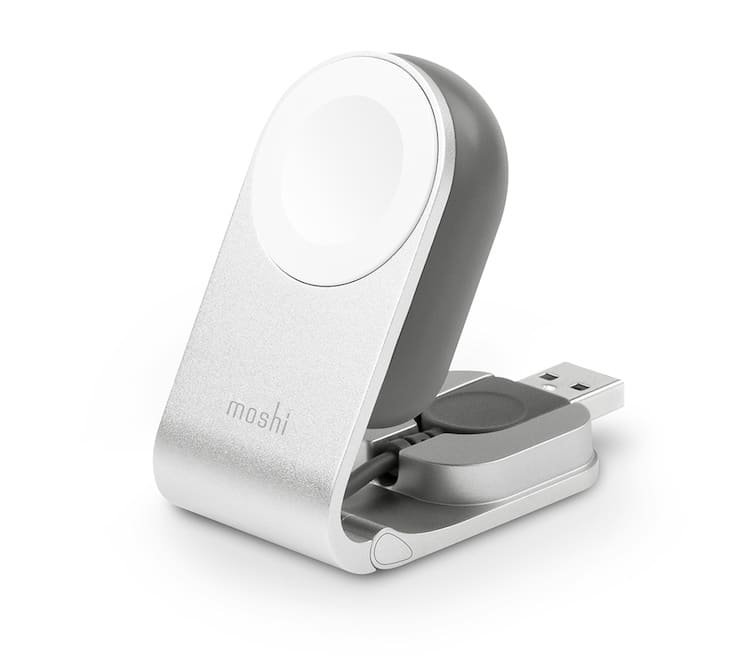 The charger measures 6.86 x 3.64 x 1.86 centimeters. It is a curved plastic arch with noticeable bulges at the ends. The main part of the accessory is silver. Outside, at the top of one of the halves, there is a round white area with a small internal depression. This rubberized base is responsible for the stable position of the watch on it, preventing them from slipping. It should be noted that the standard Apple Watch charger is much more slippery. 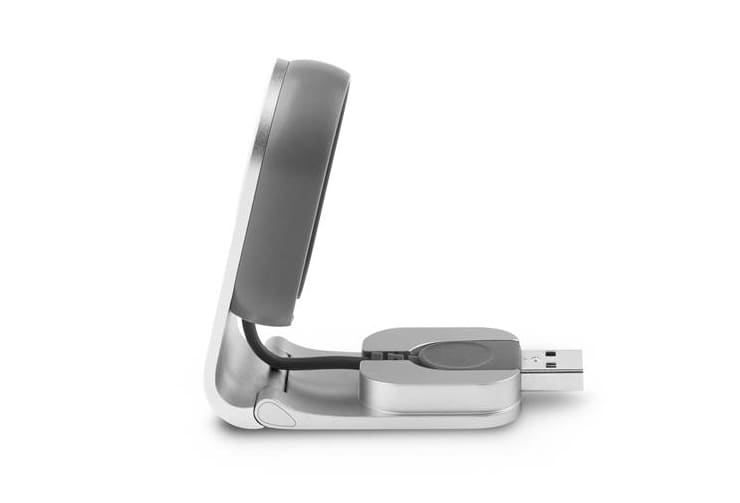 The bow is extended with a sturdy aluminum hinge in the middle, and the bracket provides strength. A small tail of the USB-A charging cable is located inside the lower bulge. It can be removed from there and connected to a computer or external charger. In the lower part of the raised half, the manufacturer’s name is printed on the outside in white letters.

See also  Apple Digital Heir: How to set up and use 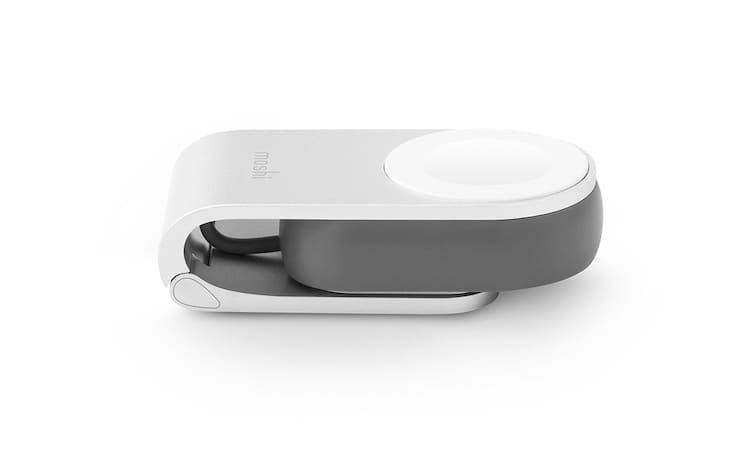 How does Moshi Flekto work?

The device itself can have two forms – in a compact, folded version, it is easy to transport and can even fit in a pocket or a small bag. 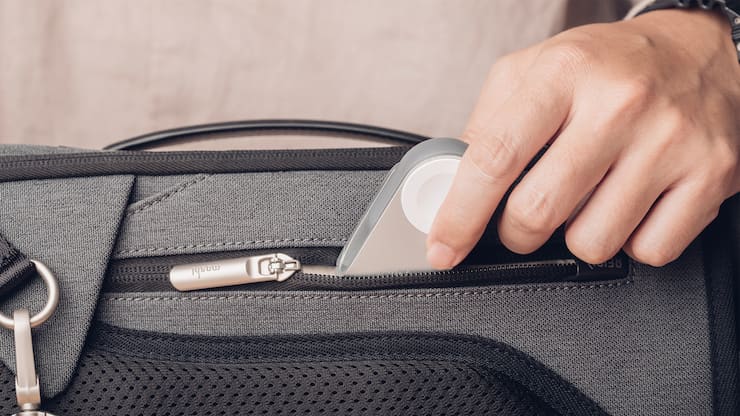 In the unfolded version, the maximum angle between the halves is 75%. The position of the first, inclined half, is firmly held by the hinge, and the device itself stands steadily on the second, horizontal surface. The cable (included) can be connected to the USB port, but you need to put your Apple Watch on the white pad. 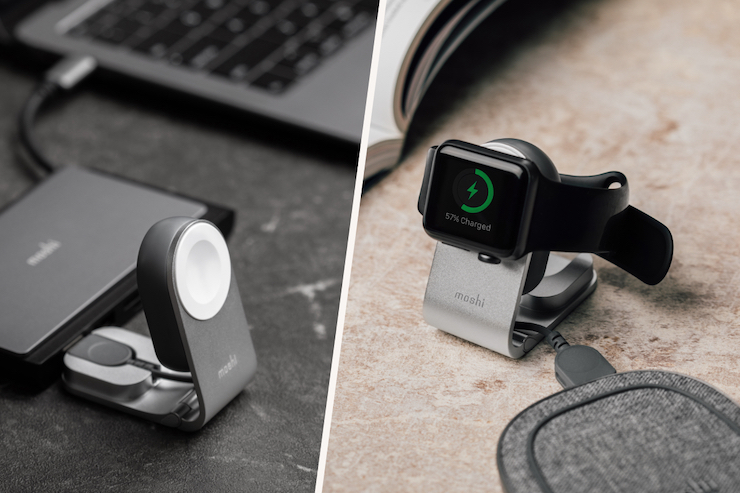 With the Moshi Flekto maximum tilt angle, the watch will look great in night mode. It is in it, on the bedside table, that the Apple Watch most often works. By placing them on an inclined platform, you can always easily see the current time. So, together with the Moshi accessory, the Apple Watch very functionally replaces an ordinary watch that can emit uncomfortable light. 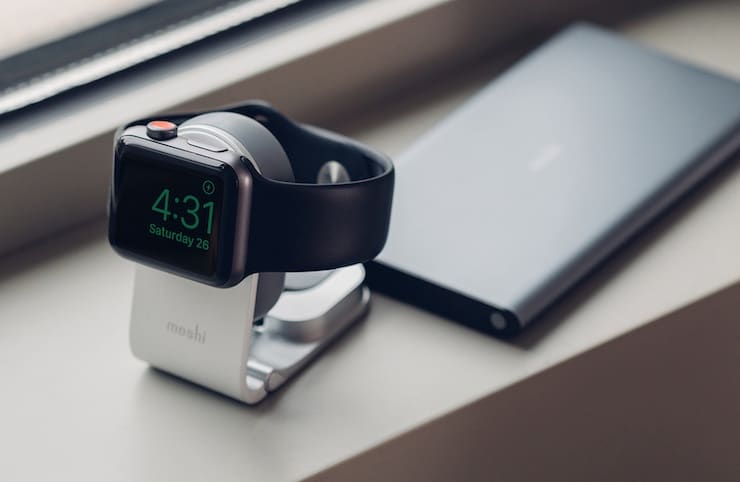 Inside the charger is a strong magnet that will hold the watch securely in place in both landscape and portrait mode. An interesting design feature – a cable with a USB connector can be left inside the bulge, which will allow you to connect the entire accessory to the charging port at once. This is very convenient if there is simply nowhere to put Moshi Flekto. A similar situation can occur with the power adapter plugged into an outlet. As a result, the built-in cable can be hidden to avoid damage or confusion during transport, and is long enough to connect to any nearby USB port. 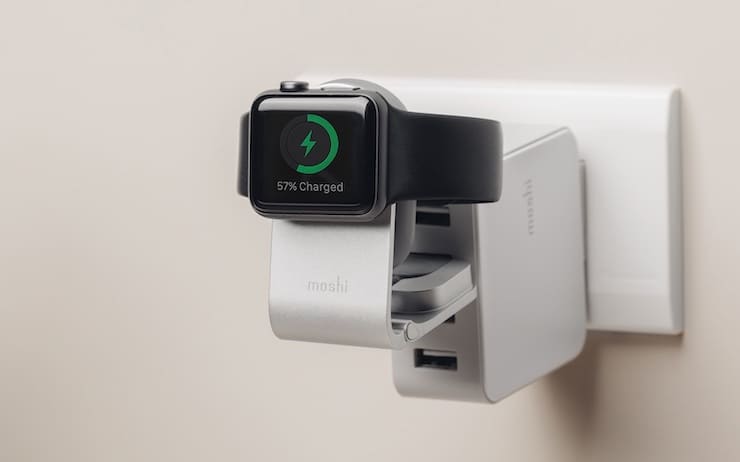 Moshi takes compatibility issues seriously. Flekto is MFI certified, which guarantees the quality and reliability of the charger, the ability to work with all Apple Watch series, regardless of their size and band style. The global 10-year warranty proves the manufacturer’s confidence in their product.

Moshi Flekto is a very interesting, stylish and laconic device. It does not take up much space, while its capabilities are much superior to the original charger for the Apple Watch. Moshi Flekto is made of high-quality and reliable materials and allows the watch to be positioned at different angles during charging, which will expand the possibilities of using it even in this mode.