For the studio Mirari Games, a game called “Mirages Of Winter” was the debut. I must say, the developers were clearly in no hurry to declare themselves, making their product as perfect as possible. Even at a very cursory and at first glance, the game seems clearly unusual. Unobtrusive Japanese or Korean motives are guessed in it, and these cultures are always original and mysterious. I must say, Mirages Of Winter will not disappoint fans of aesthetics, proving once again that games can be not only time-killers, but small works of art. 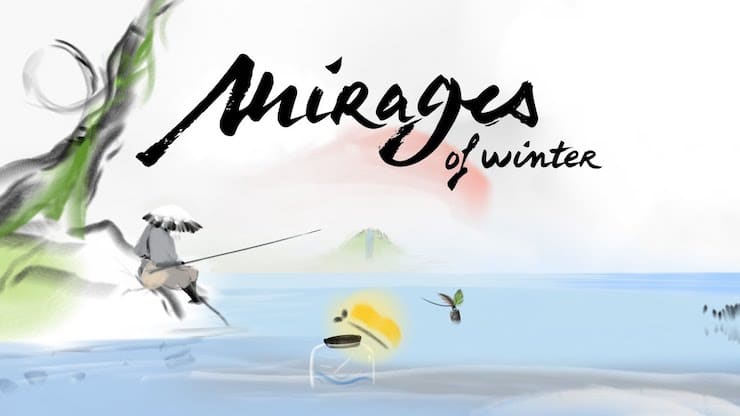 East Asian culture, like no other, adjusts to tranquility and meditation. A mobile game with such a foundation, while most analogues generate activity and drive, is more relevant than ever. Mirages Of Winter is not about scoring points or completing stages quickly. With its help, we smoothly immerse ourselves in the world of oriental culture, with its music, painting and even hokku. The gameplay is truly unique, Mirages Of Winter can be classified as a puzzle. Of course, the approach to riddles and the way they are presented will be completely unusual. But all this is for the sake of your relaxation, not a nervous search for a solution.

The game is based on the story of a fisherman who lives an ordinary life on an island. The action starts in winter, but for some reason spring has not come. The player is invited to restore the balance of nature and help nature restore order. To do this, you will have to find five classic elements – wind, fire, water, earth and metal. The gameplay itself is played out in the form of a laconic interactive poem, resembling in some way other hits, The Room or Returner.

See also  How much time do you spend in each application on iPhone or iPad, how to find out

But there are no complex riddles that will take a long time. True, the puzzles cannot be called simple, some even cannot be understood right away, while it is often suggested not to rely on hints, but to solve everything ourselves. At the very beginning Mirages Of Winter gives the player a branch of an apricot tree, which must be attached somewhere. However, the destination does not immediately respond to the contact. This is not a glitch – it was conceived, you have nowhere to rush. The further journey around the island will take place among hand-painted landscapes full of secrets.

But it is precisely such riddles that form the originality of the game, the player willy-nilly has to imbue its spirit. It helps that the mechanics themselves are uncomplicated. When you click on an object, a colored shape will appear in the environment. It represents a certain element that must be placed in a certain place in the scene. And these movements are not accidental, they are based on the harmony of all five elements and Zen practice, the unity of man with nature. Sometimes the clues still help, because the story is full of abstractions and the goal is not always visible or clear. The game allows you to play it at your own pace. You can exit the application and enter again, the progress is saved. But I don’t want to rush anywhere, because there are so many little things that I want to pay attention to.

It is the graphics that are the main feature of the game. It is no coincidence that the studio’s creative director, Martin Goldschmid, is an artist. By the way, it was the painting he painted in 2014 depicting a fisherman on a boat that turned out to be embodied in Mirages. Goldschmid says visuals play a key role in the game as they form the “poetic space” available for interaction. The entire playing field looks like a modern-style Japanese painting of the medieval era. The elements seem to be smeared, but this is how the softness and warmth of the images are formed.

Both nature and its details look laconic, but at the same time thoughtful and natural. You just want to look at the drawn locations, but you can still move around them. And the artists may have even deliberately abandoned the color riot, giving the player the opportunity to either concentrate on the main thing, or paint this picture in his subconscious. Animations move smoothly and slowly, movement from target to target occurs when the player is ready for this, as if moving first inside himself to a new stage. If the gameplay was compared earlier, the graphics feel are comparable to hits like Journey and Flower, which are also meditative.

And the music is quite consistent with the picture. Soothing sounds help you to relax and think only about this world and its enchanting mysteries. This is also an important part of the experience that Mirages Of Winter can give. Original music created especially for the game, the sounds of the Korean Daegeum flute help to shape the appropriate mood. There is Russian language in the game, which makes it even closer and more understandable to the domestic user. But the language here, believe me, is far from the most important thing. The game speaks with images and emotions.

See also  How to measure distance in Google Maps on iPhone, Android or computer

Mirages Of Winter is a game that unobtrusively makes us a creator, forcing us to meditatively participate in the modification of the world. Of course, the main thing here is not at all the goal in the form of an offensive on the island of the long-awaited spring, but the process itself. We increasingly need activities that will help us forget about the hustle and bustle, business and nervous tension. Eastern culture with its graphics, poetry and meditation is a great option. And the game Mirages Of Winter is a carefully and lovingly made guide to this world. And every moment spent in the game will give your soul the peace it needs so much.