When buying an iPhone “off hand”, in addition to checking its appearance, kit and functionality of the main functions, it is necessary to pay special attention to the issue of linking a smartphone to a mobile operator. The new owner may face a problem: the device sees the network, but when working with a SIM card, problems begin. They may also appear after an iOS update. The reason for this behavior of the smartphone is blocking on one or another mobile operator. In this article, we will tell you in detail what a locked iPhone is and why it is not recommended to purchase such a device? 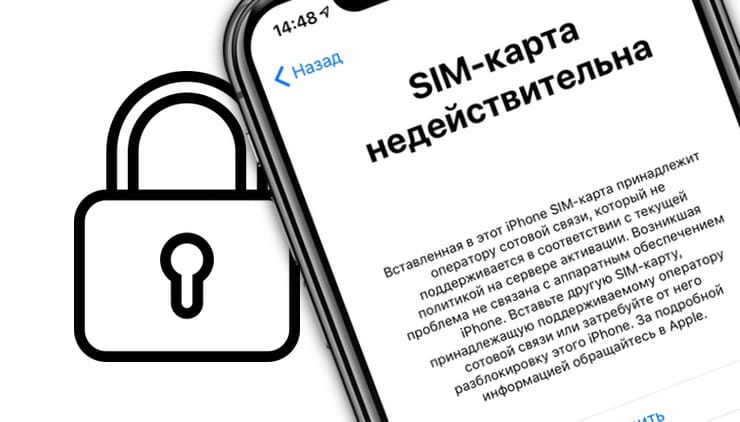 ♥ BY THEME: What is a “gray” iPhone and is it worth buying such a device.

What is a locked iPhone?

Locked iPhone (Locked, Sim Lock, Factory Lock, locked, tied to the operator) is an iPhone that can only work with a SIM card of one specific mobile operator.

In many countries, Apple sells its iPhones along with a contract with mobile carrier networks such as AT&T, T-Mobile, etc. In other words, they can only work in the networks of certain operators. This tactic is beneficial to everyone – the manufacturer himself received the buyer, the operator – the client, and the consumer had the opportunity to purchase a top-end device virtually for next to nothing, but at the expense of a long installment plan in the form of a monthly payment for a particular package of services.

♥ BY THEME: iPhone new, demo or refurbished (ref, CPO, like new) – how to check by model number.

Why is it not recommended to buy a locked iPhone?

1. To activate a locked iPhone, you need a SIM-card of the “native” mobile operator, which is often difficult to find. Here it is necessary to take into account that a locked iPhone without activation cannot be used even for listening to music, watching films or web pages on the Internet – it’s just a brick.

2. In order to make phone calls using a locked iPhone, you need to perform the Unlock procedure, which is paid (see below for unlocking).

♥ BY THEME: How to check if you bought a new iPhone (activated or not)?

How to protect yourself from buying a locked iPhone?

The sale of contract iPhones is not common in Russia, as, for example, in the USA or Australia. In large retail chains in Russia, such as Svyaznoy, MVideo, etc. sold only SIM-Free (officially unlocked iPhones, not tied to an operator). However, you can easily find yourself buying a locked iPhone in a little-known one-day online store or from an unscrupulous seller on the Avito or Yula website.

How to check if the iPhone is locked or not (is it tied to a mobile operator)?

Starting with iOS 14, Apple decided to help users and provide information about the blocking in the system itself.

To check the blocking status, follow the path Settings → General → About this device → Operator lock… In this field you can see the information you need. 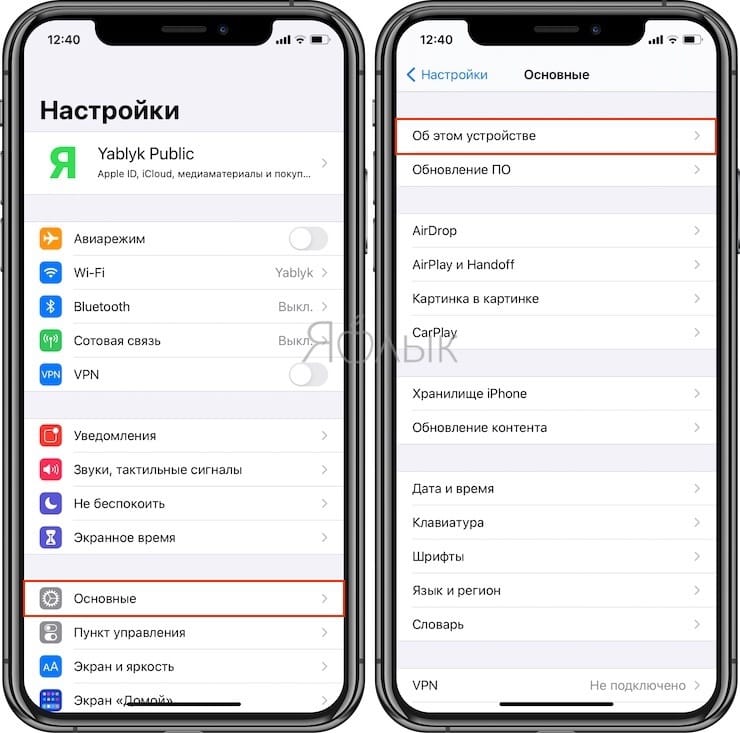 If it says “SIM without limits”, the device is not tied to any operator and can work with your SIM card. 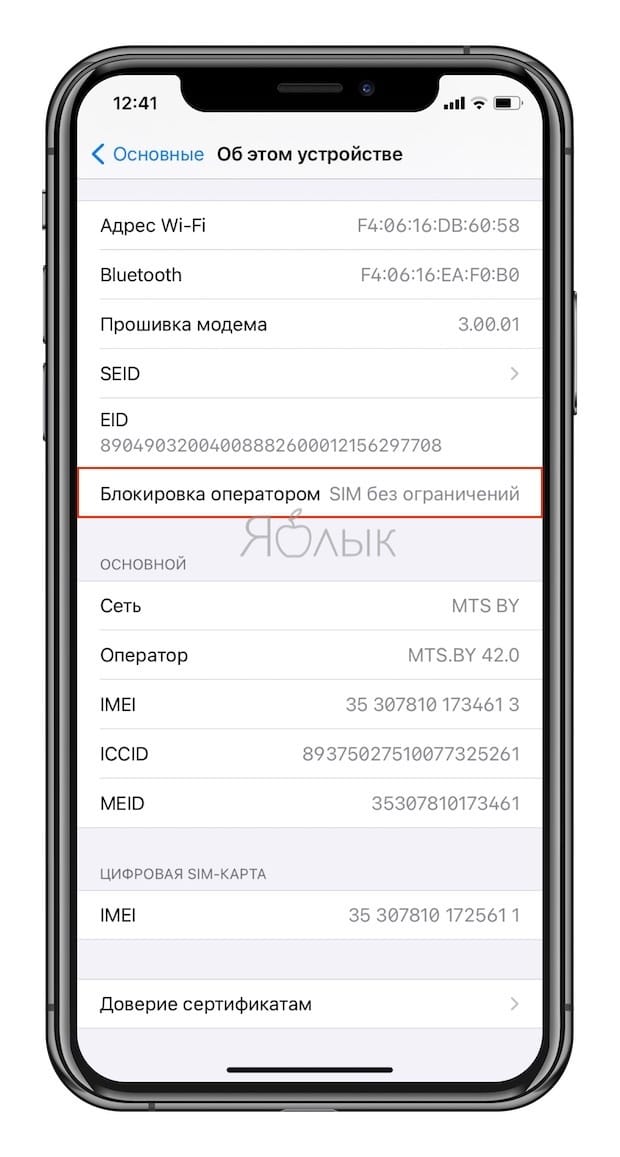 By inserting a SIM card from a local operator:

An officially unlocked iPhone (Sim Free) will quickly recognize the local operator’s SIM card and allow you to make phone calls. At the same time, a notification will appear on the display of the locked iPhone “Activation Required”and the device itself will go to the lock screen.

See also  Announcing headphone notifications on iPhone: how to enable

Open the request for Free IMEI Checker iPhone Carrier in Google and select an online verification service from the top results. It should be borne in mind that checking by IMEI for blocking the iPhone on the operator is often a paid service and can be $ 0, 5 – $ 2.

The result of the check will be a similar list of information (see below), which will indicate the blocking status, as well as the name of the operator to which the iPhone is locked (if there is a binding). 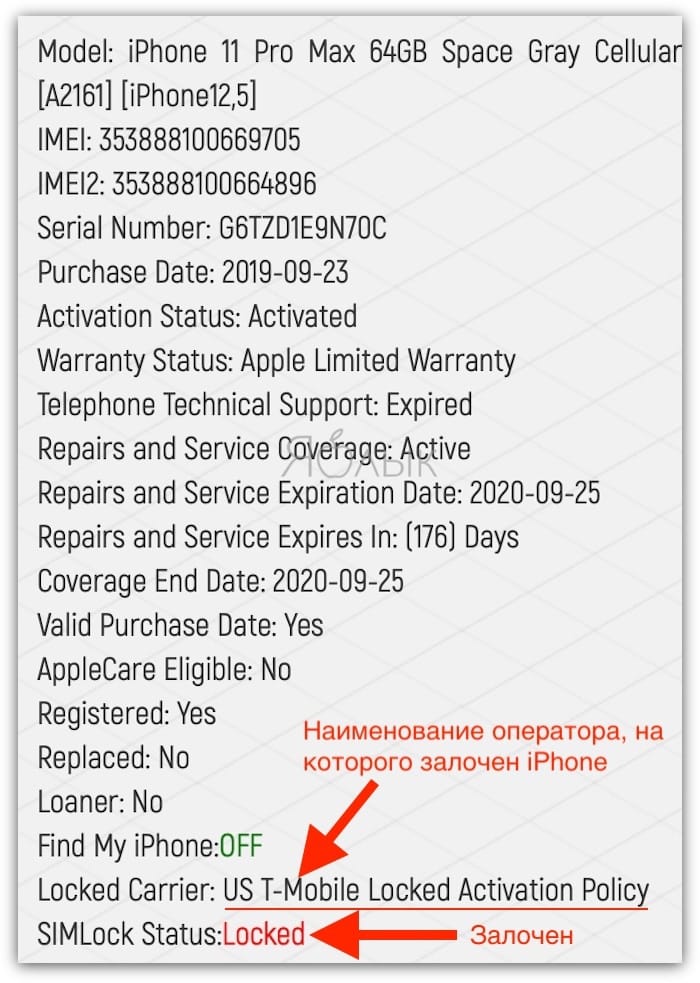 Before using the services of the selected online service, find out the IMEI of the iPhone being checked – the number is indicated on the box or in the smartphone settings along the way: “Settings” → “General” → “About this device” → IMEI…

In this way, you can check only iPhones that are officially released for the Russian market.

The iPhone model ID is listed on the box or in the smartphone settings along the way: “Settings” → “General” → “About this device” → Model…

Two letters of the Latin alphabet, indicated after the numbers in the model designation, indicate the country for the market of which the device was released. If the letters “RU” are indicated in the iPhone model, then this smartphone is intended for Russia and cannot be locked.

If, for example, “LL” (gadgets for the US market) is indicated in the model designation instead of “RU”, you will need additional verification, since both locked and officially unlocked iPhones are offered to users in the United States.

♥ BY THEME: 20 iPhone features that can be disabled for most users

How to Unlock (Unlock) iPhone?

At the moment, there are two main ways to unlock iPhone, and each of them, unfortunately, is paid. 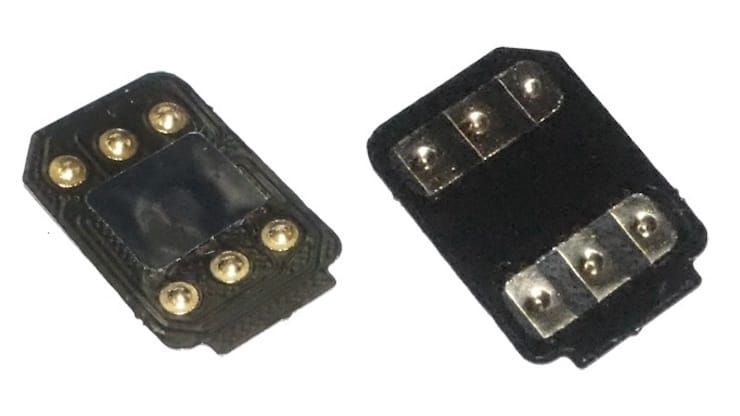 A special Turbo-Sim adapter is used as a tool for hardware unlocking, into which a SIM card of any operator is inserted. Turbo-Sim is a microchip that contains the unique IMSIs of well-known cellular operators, thanks to which the blocking is bypassed.

Unlocking with Turbo SIM may have some disadvantages, such as: the inability to update the firmware, repeated activation procedure after signal loss, etc.

Turbo-Sim from manufacturers such as Gevey and R-Sim are widespread in Russia. The adapter price ranges from 1300 to 2000 rubles.

The ideal option is an official jailbreak provided by the operator or through the online service of a reputable reseller. In this case, the IMEI of the locked iPhone is entered into the list of officially unlocked devices, after which the ban on the use of any SIM-cards is lifted from the smartphone.

The cost of an official “unlock” is from 700 to 15 thousand rubles, depending on the operator.

♥ BY THEME: How to download books to iPhone or iPad for free and without a computer.

How do you know if an operator can officially unlock (unlock) an iPhone?

You can check the operator’s ability to remove the lock from the iPhone for free on this page of the Apple official website. Specify the region for which the iPhone is intended, and then select the carrier to which the smartphone is locked.