Kitay-gorod: why is the center of Moscow called that? 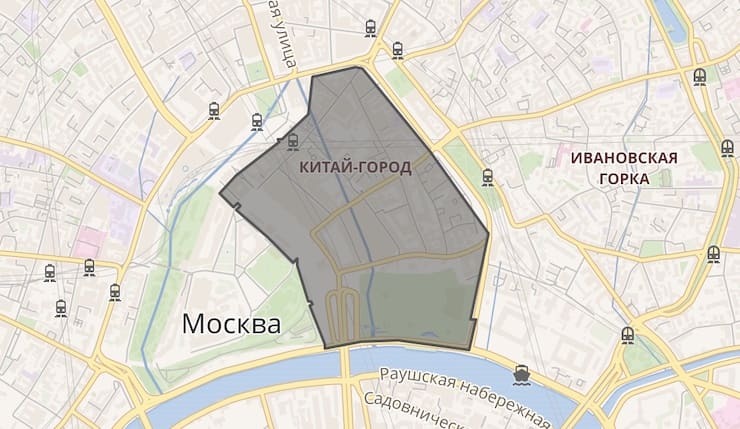 Residents and guests of Moscow know that in the very center of the capital there is a historical district with an interesting name – Kitay-Gorod. It starts from Red Square, bordering in the north with Teatralnaya Square and Okhotny Ryad, and in the east with Lubyanskaya and Staraya Square, while the southern border is set by the Moskva River. All of this is part of the Tverskoy District. Kitay-gorod includes such cult city streets as Varvarka. Ilyinka, Nikolskaya.

♥ BY TOPIC: Why is the surname of the creator of the Guinness Book of Records not Guinness.

But if this district of the capital has a long history, then it is reasonable to ask: what did the Chinese do in the very center of medieval Moscow? Do not be in a hurry to be surprised, the history of this area is long-standing, interesting, and, moreover, is not directly related to China.

So, let’s start with the most important thing – with the origin of the name of the area. In fact, China, as a country, apparently has nothing to do with it. Historians tend to believe that the key word here is “whale.” So in Russia, since the XI century, knitted poles were called, which were used in the construction of fortifications. A broader interpretation of the word “whale” is something knitted or braided into a braid. According to other versions, the area owes its name to the Italian word citta or cittadelle, that is, “fortification”, “fortress”, or to the Turkic “katay” – a city, a fortress, or even the English city – the center of a city. They say that earlier this part of Moscow was called the New or Another City, and then it began to be called the Middle City or Kitay-Gorod, because the Tatars’ word “china” just means middle. Among all the other versions, there is one that is nevertheless connected with China. Previously, among the common people, the world market was associated with this country, with which Russia had long-standing trade relations. Any fabric was called “china”, and the presence of a market in this part of the city gave rise to its name. But still, versions related to the fortified part of the city or its central / middle part seem to be more logical.

♥ BY TOPIC: Why are the inhabitants of Germany called Germans and not Germans? 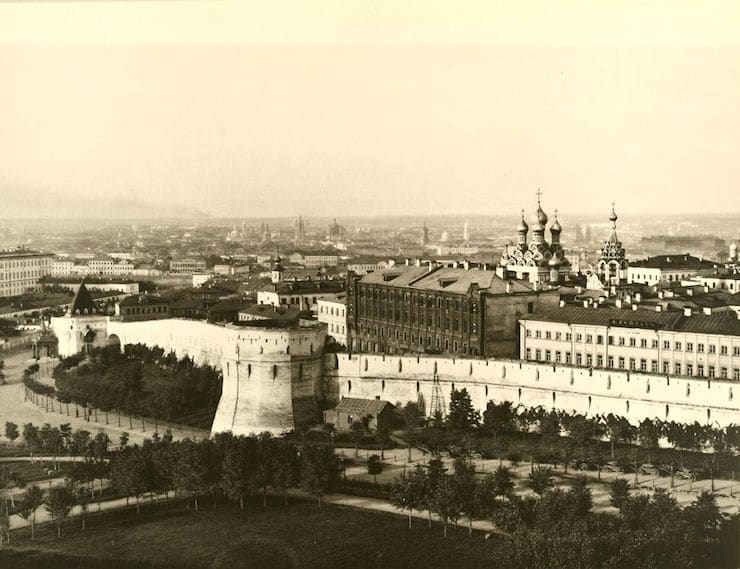 Kitay-gorod in Moscow, 1887. From left to right: The Barbarian Gate and the Deaf Faceted (Multifaceted) Tower

Kitay-Gorod, like the Kremlin, is the oldest district in Moscow. Originally located in the Kremlin, the Great Posad under Dmitry Donskoy and Ivan Kalita expanded eastward, occupying the territory of Kitai-Gorod. In the 16th century, the nobility began to move there – merchants chose Zamoskvorechye for themselves, and artisans – unattractive for the rich Zaryadye, periodically flooded with water. And although Ivan the Terrible tried to populate Kitai-Gorod with merchants, displacing the nobles, this practice did not take root.

In 1701, there were 272 courtyards in the city of China, and the overwhelming majority of them belonged to the clergy, boyars and nobles. But here is also the city trade center – Gostiny Dvor and Trade Rows. Gradually, by the 18th-19th centuries, the area was nevertheless considered a merchant. And in the 19th century, a city stock exchange appeared here, banks and offices began to open. By the beginning of the 20th century, Kitay-Gorod had become an analogue of the City of London. After the Revolution of 1917, the area became the site of state-party institutions, and the buildings of the Central Committee of the CPSU were located here. Today, it is here, on Staraya Square, that the Administration of the President of Russia is located.

There is also a misconception that Kitay-Gorod got its name from the long wall around the center of Moscow, similar to the Great Wall of China. However, Kitai-Gorod has nothing to do with VKS, so Kitay-Gorod first appeared in Moscow, and only in the 16th century it was surrounded by a wall.

♥ BY TOPIC: Why did they speak Latin in ancient Rome, and now – in Italian?

In the Middle Ages, the area received a system of fortifications. First, the townspeople in 1394 began to build a moat, expecting the invasion of Tamerlane. He walked along the line of modern Vladimirsky / Pskovsky and Bolshoy Cherkassky lanes. For more than a hundred years, the defense of the posad was limited to this. But in 1535 the mother of Ivan the Terrible, Elena Glinskaya, ordered to build a stone wall. The construction consecrated the church, and the first stones in the foundation were laid by Metropolitan Daniel. The construction of the walls was undertaken by the Italian Petrok Maly Fryazin. The fortification took into account current military trends – the walls were lower than those of the Kremlin, but thicker, and guns could be placed on the sites. The wall was erected in 3 years. It had a length of 2567 meters, 12 towers and covered an area of ​​63 hectares. 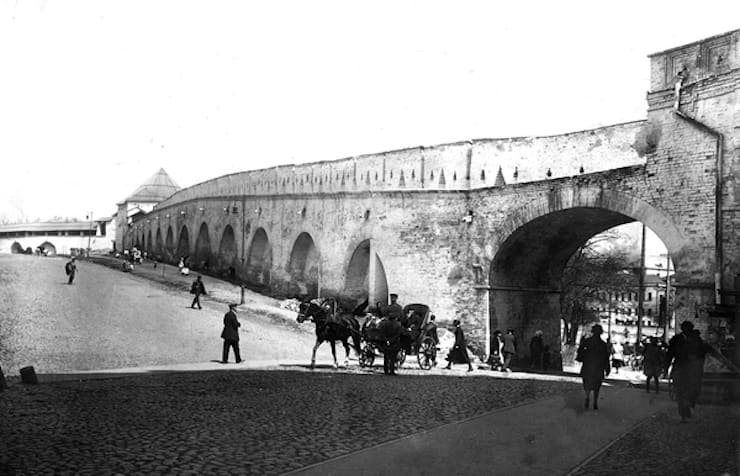 It must be said that the walls of Kitai-Gorod played a role in the defense of the city. So, in 1571, battles with Khan Devlet-girey were fought near it, but he did not dare to storm the fortifications. And in 1611, during the Moscow uprising, the fortress helped the townspeople in their confrontation with the Commonwealth. The walls were periodically repaired and strengthened, new gates appeared. 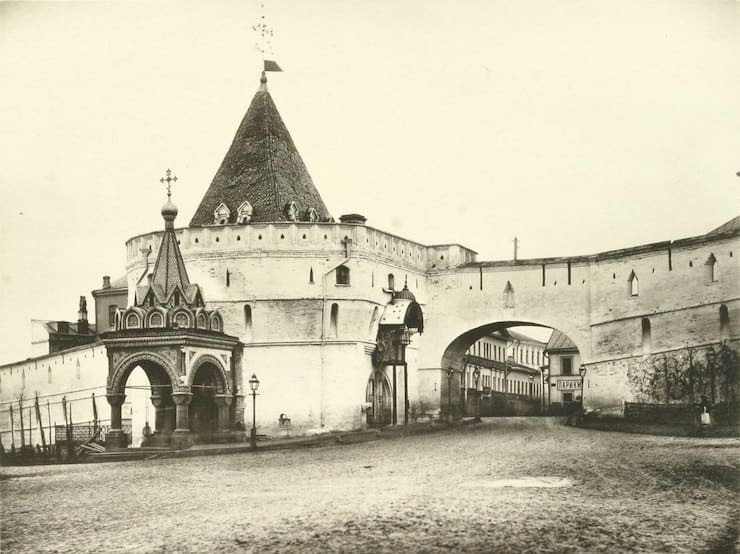 Yes, and Peter I during the Northern War, fearing the invasion of Charles XII, ordered to renew the walls. But by the 18th century, the walls of Kitai-Gorod had become meaningless from a military point of view. The fortification began to decay and crumble, the townspeople began to attach stables and sheds to the towers, an embankment was built along the wall near the Moskva River. 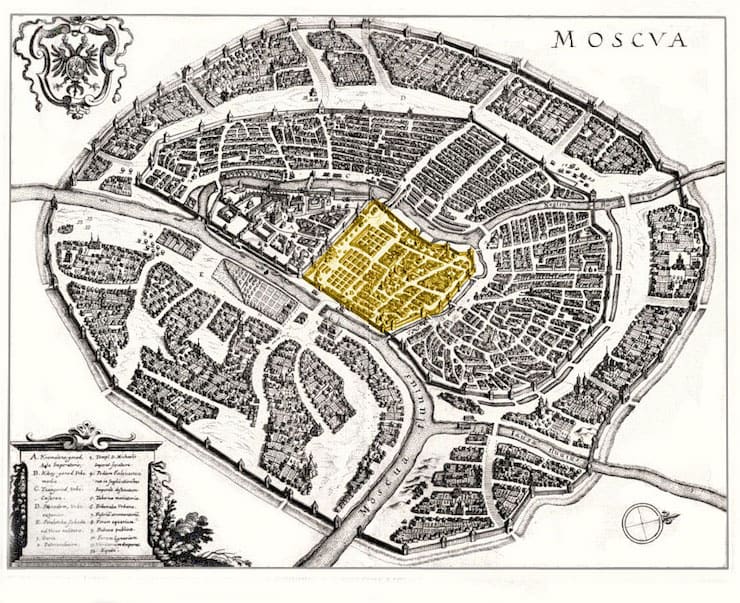 Chinatown on the plan (1638) by Matthäus Merian highlighted in yellow

The developing city simply swallowed up the walls of Kitai-Gorod. By the end of the 19th century, they were in a deplorable state. After the revolution, the Moscow authorities decided on a complete restoration of the historical monument, work lasted from 1925 to 1932. As a result, it was decided to demolish the walls of Kitay-gorod – the streets grew, and the old fortifications frankly interfered. In 1934, the walls were demolished. The wreckage was turned into rubble, which was used in the construction of the first metro lines. Today, only a few fragments and part of the foundation remain of the walls of Kitai-Gorod. And the elements recreated during the reconstruction are still imitations from the point of view of historians. 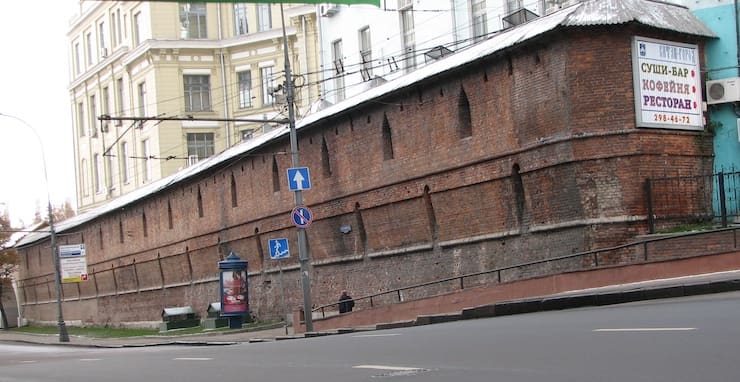 The restored section of the wall in Kitaygorodsky passage, 2006 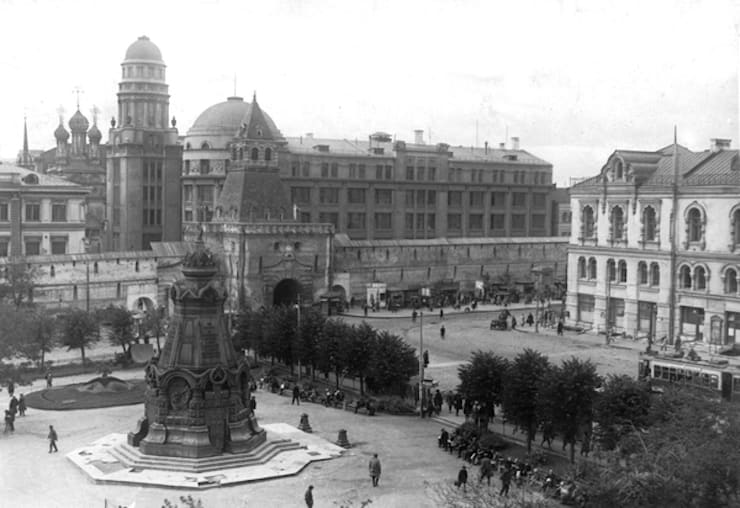 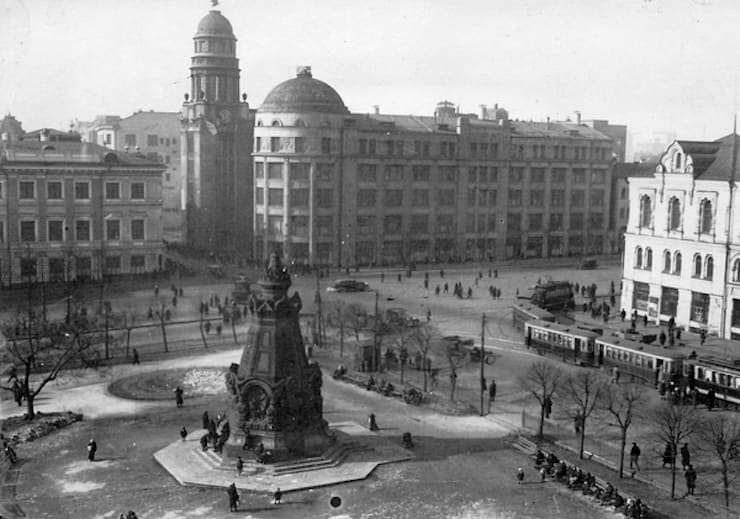 ♥ BY TOPIC: Why is there a buffet only in Russia?

Today, on the territory of Kitay-gorod there are many historical and architectural sights, including the remains of the Kitaygorodskaya wall. It is no coincidence that this area is never ignored by tourists. There is the Intercession Cathedral (aka St.Basil’s Cathedral), Gostiny Dvor, GUM, Kazan Cathedral, Resurrection Gate. There have always been many churches and chapels in Kitai-Gorod, and some of them were demolished in the harsh 1930s. And the most famous streets of Kitai-gorod – Nikolskaya, Ilyinka, Varvarka have long been considered the heart of Moscow.