Thatgamecompany studio under the auspices of the Annapurna Interactive publishing house at one time managed to surprise a lot with the game Flower. She became a fresh breath, built on our emotions. The team’s next project, Journey, turned out to be no less interesting. 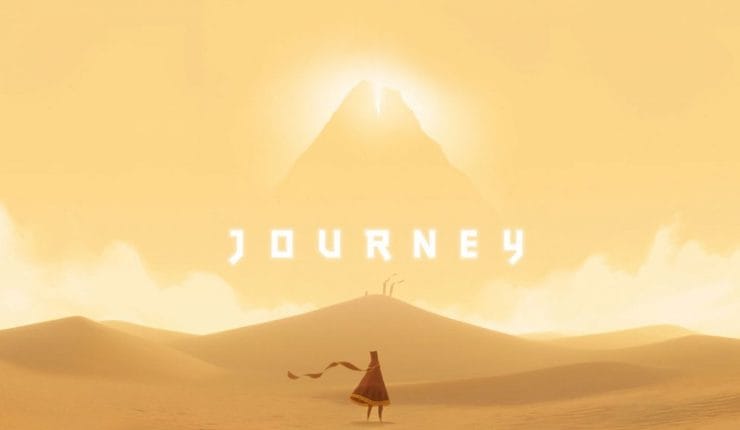 In Journey, the player is invited to control a certain nameless wanderer. His image is so laconic that he didn’t need his hands either – only his legs stick out from under a long robe. Our hero found himself in the desert, but the landmark quickly becomes clear – a clearly unusual high mountain looms on the horizon. The story of the journey is revealed through several embedded scenes, to which neither text nor voice explanations are given. The desert, through which the wanderer has to move, seems alive, resembling the sea. Yes, and our hero himself knows how to get off the ground for a short time, as if floating over it. The local flora consists of objects created by bizarre ribbons that float above the stones, then hide in them. However, this surreal world does not frighten at all, but even beckons. After all, his secrets clearly await clues.

Ribbons are an important element of the game. In the desert, you will need to find special signs that, with the help of ribbons, gradually increase the length of the wanderer’s scarf. And the longer this piece of clothing, the longer you can float in the air. The main tool for interacting with the outside world is voice. At the touch of a button, the wanderer makes sounds of different strengths and tones. With their help, belts dormant among the sands are activated. They turn into bridges and stairs, throw up and carry the character.

Another such wanderer may meet on the journey. The creators of the game decided not to complicate it with the multiplayer settings. The traveler twin we meet could be anyone. All communication between the characters is limited only by the emission of sounds of different timbre in an attempt to create a simple melody. But in some situations, the companion can help with his energy. On iOS, Game Center is responsible for finding partners. The game can be played without a cooperative, but its unusual use gives its own charm to the passage.

Touch controls in the game do not interfere with the gameplay. By the time the game rhythm begins to accelerate, the player has already become comfortable with the virtual joystick and camera control.

Visually, the game is really impressive, even if the quality of textures fades into the background to the overall design. Plus, it supports higher refresh rates for an even stronger Journey experience on iPad Pro. Smooth picture movement will be provided by powerful iOS devices, starting with the iPad Air 2 and iPhone 7. Soundtrack is also an important part of Journey. In addition to communicating with other people, the background creates a sense of mystery for the entire journey. And on some devices, sounds are also accompanied by tactile feedback.

The creators of Journey call their style Impressionist Realism. The game is really emotion-driven, just like Flower. So it is natural to feel joy from a rapid descent from the mountain, victories over the enemy, to sympathize with a random traveler. Journey is aimed not at character leveling, but at getting the player aesthetic pleasure. The journey will last about 3 hours, but you will certainly want to return to the stunning locations. The very first passage will be an unforgettable magic.

See also  Private access (Incognito mode) in Safari on iPhone and iPad: how to turn it on and use

You can take Journey as a philosophical parable, or you can just enjoy the atmosphere so carefully and lovingly created. The disadvantages of the game are related to its porting – you will have to get used to the controls. But this little thing is unable to prevent you from enjoying a really high-quality product.