Apple considers its iPad Pro tablets powerful enough to challenge classic laptops. It is no coincidence that certain variants of keyboards for tablets appear, which significantly expand the capabilities of devices and bring them closer to another class. Of course, there are a number of compromises and there is no escape from them. Both Smart Keyboard and Magic Keyboard are primarily thin keyboards, not multifunctional expansions with additional ports. True, modern laptops by themselves cannot boast of a variety of ports. 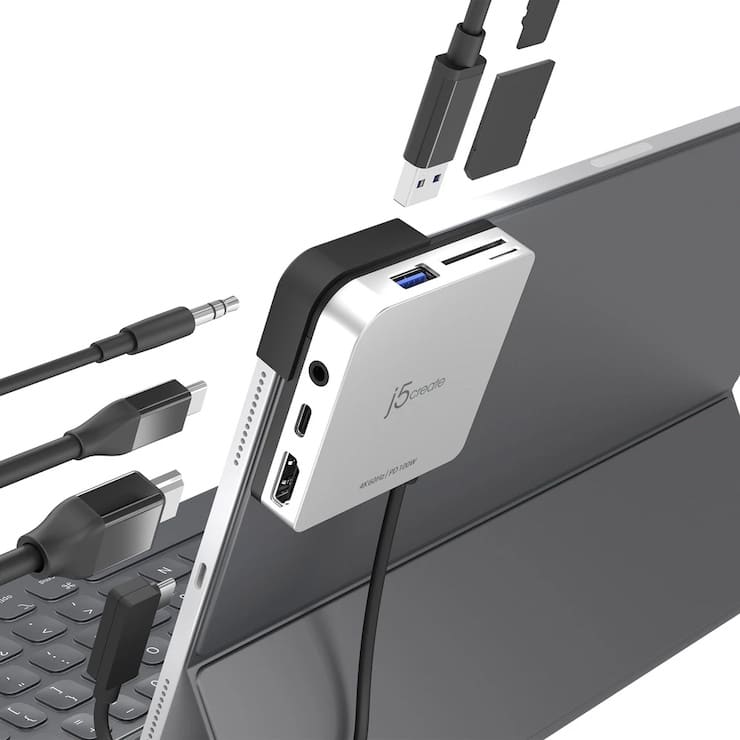 J5create, a well-known manufacturer of quality accessories for Apple technology, has created a compact but functional docking station especially for the iPad Pro. However, this device can work with other gadgets by connecting via USB-C. Let’s take a closer look at this interesting solution.

♥ BY THEME: j5create JCD389 is a unique modular USB-C MacBook docking station for all occasions.

Traditionally, j5create is thoughtful about packaging its product. The buyer, only picking up the box in his hands, should understand that he is dealing with a quality product. The packaging is made in the traditional white and orange colors for the manufacturer. 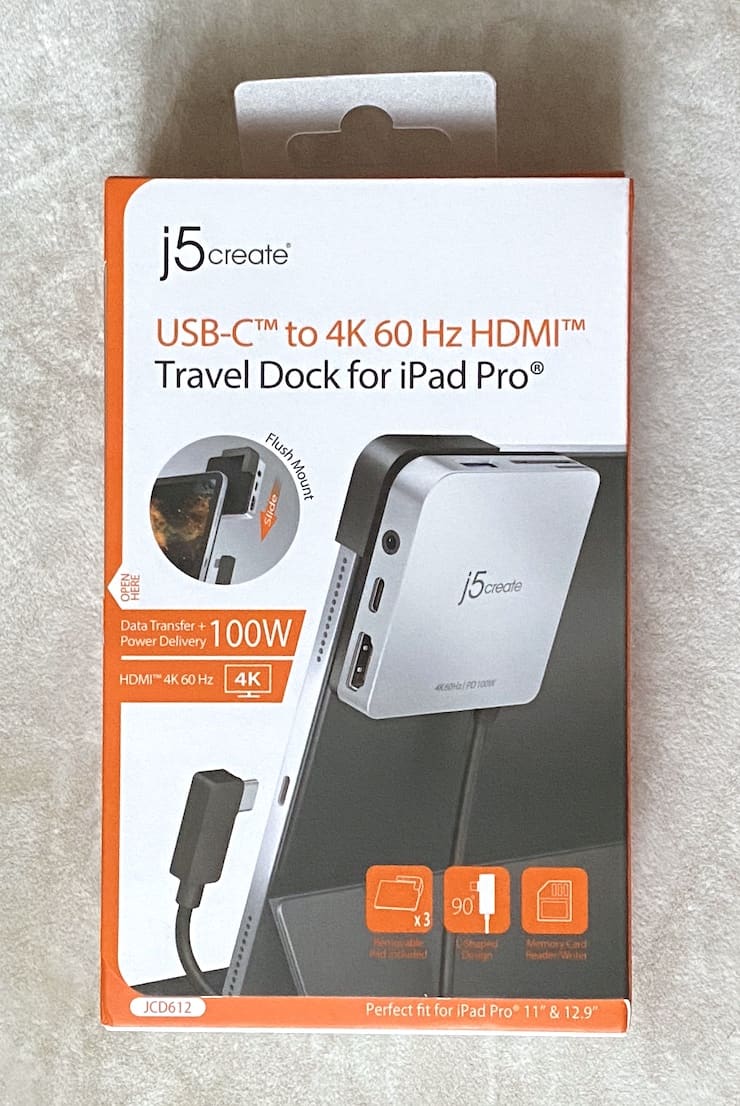 However, there are not many white voids left – the area of ​​the box is filled as informatively as possible. The front side shows the docking station attached to the iPad Pro, ready to connect and in large print, and at the bottom also with icons, its main features are listed. The rear panel shows essentially the same illustration, but the docking cables have been added. In addition, you can see how best to attach the device to the iPad Pro. And again all the characteristics are indicated, this time in a little more detail and already in tabular form.

The inner part of the box is a Velcro book. The manufacturer, on the one hand, has formed an additional sheet of protection for the inner pocket, on the other hand, provided himself with two more informative areas. One of them has a transparent window in which the docking station itself is visible. The rest of the orange area is given to the next drawing of the device’s neighborhood with the iPad Pro. 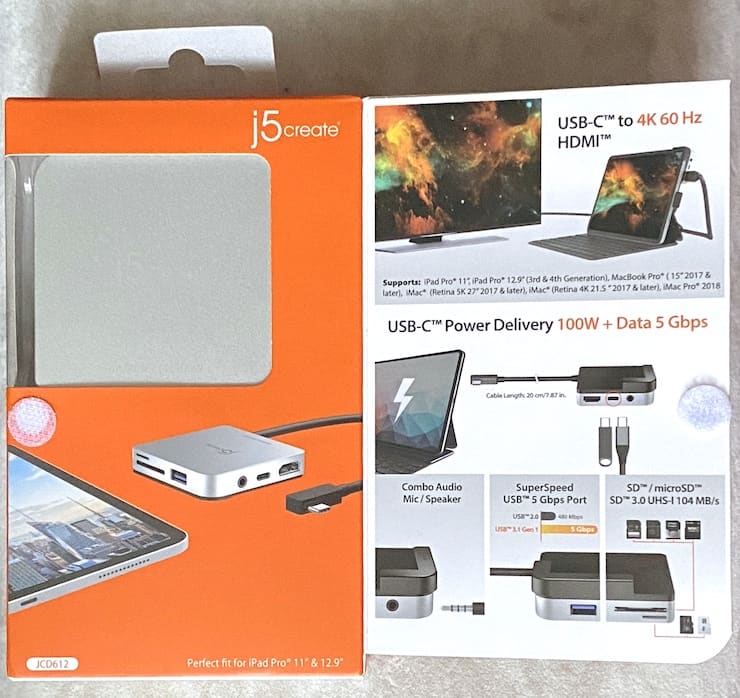 The page opposite to the outside of the box is filled with successive drawings. They will talk about the JCD612’s compatibility with other devices and clearly show the use cases for the device.

It may seem that there is not just a lot of information, but a lot. But is it superfluous? For an advanced user, this is just a bright design of the package, and a beginner will receive valuable tips for himself on the options for using the j5create JCD612 docking station. 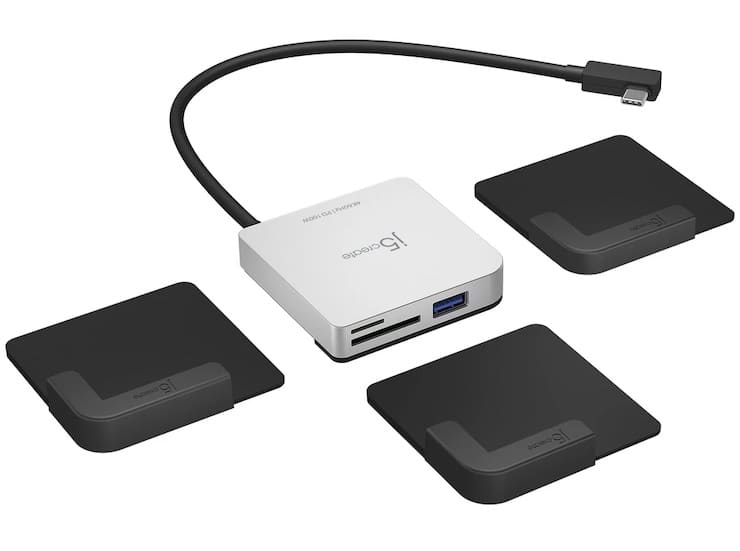 The docking station comes with three plastic replacement attachments with corners for attaching to the iPad Pro and a quick setup guide. The device is one-piece, there are no replaceable blocks in it. This determines the laconic configuration. 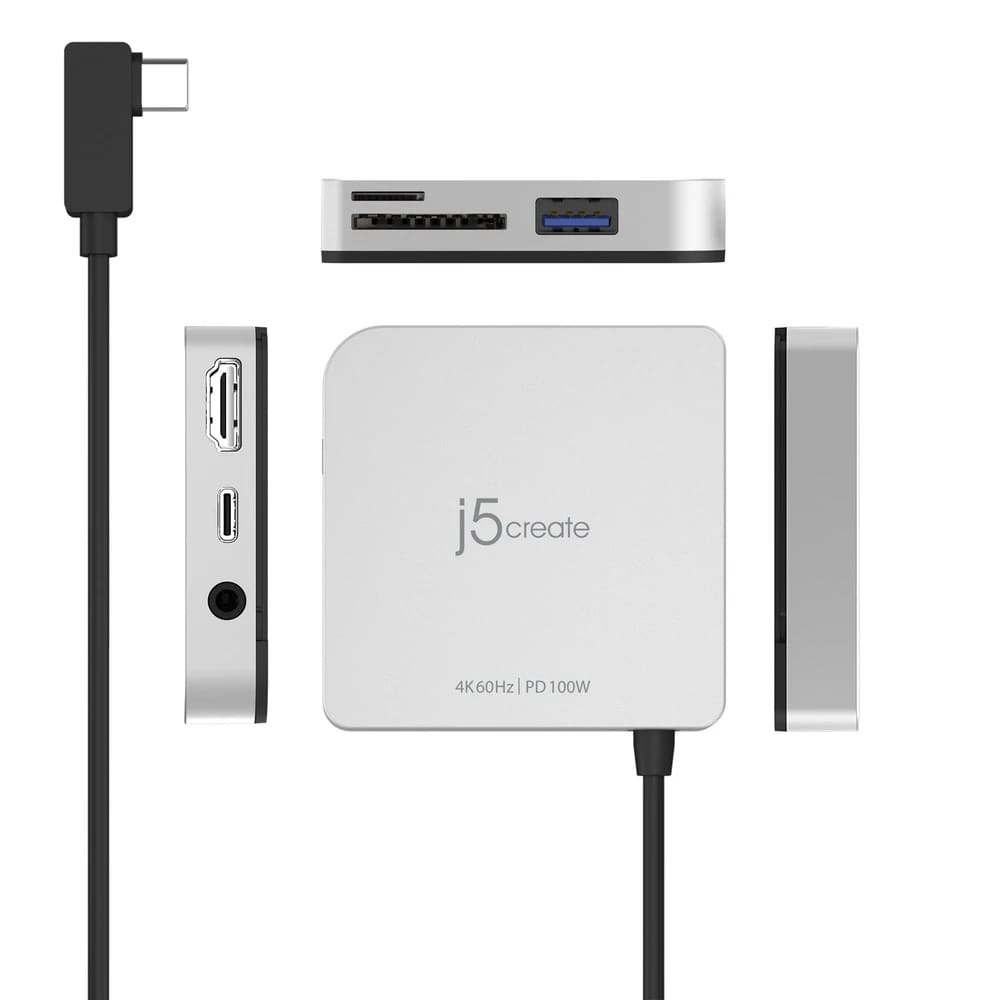 The JCD612 docking station from j5create is a square white box with a black bottom. The main material is plastic. The format of the device is literally “pocket”, it will easily accompany you and will not take up much space. The docking station measures 66 x 66 x 14.3mm and weighs just 72g. 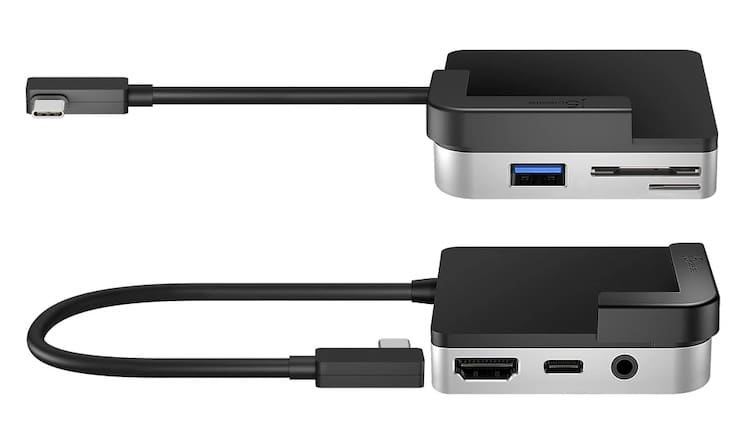 The corners of the device are made rounded, but one of them received a noticeably larger radius. In the middle of the upper plate, the manufacturer’s logo is embossed, and at the bottom – some of the characteristics related to image output and current transfer. In the pictures, the inscriptions look gray and much more pronounced than in reality. The underside features certification badges, country of origin, model number and serial number. There are also barely noticeable strip-rails for placing nozzles.

A non-detachable 20-cm cable with a connector for connecting to the USB-C port comes out from the right side of the bottom relative to the side logo. The left side is given to a combined 3.5 mm audio jack for connecting a microphone / speaker, a USB-C 3.1 port and an HDMI port. The upper edge received a pair of card readers – for SD and microSD memory cards, as well as a USB-A 3.1 port. The right side is left empty. 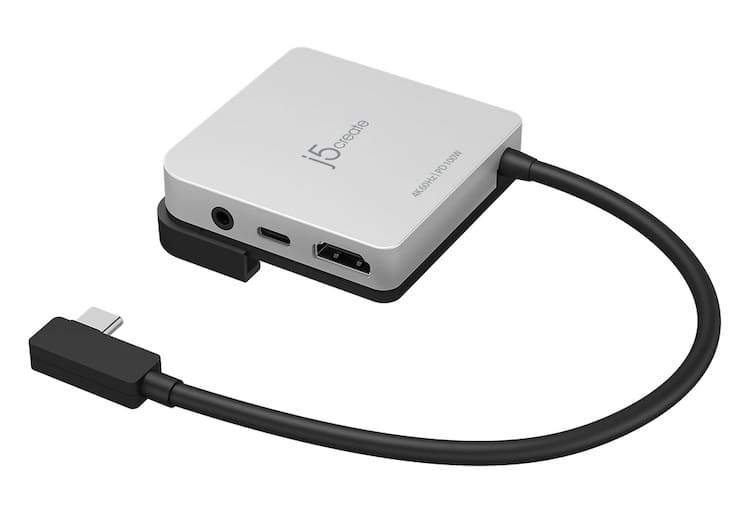 The three nozzles themselves received the same design – thin square plates, differing in the height of the corner… He himself is in the upper right part of the plate. It is in this place that the dock will be in contact with the iPad Pro. 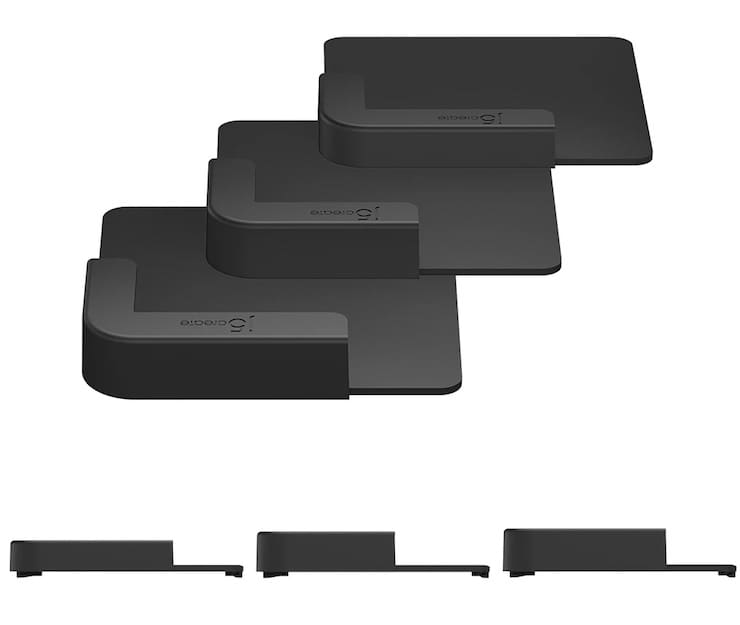 The inner surface of the nozzle is covered with soft rubber to prevent slipping and protect the tablet from scratches. 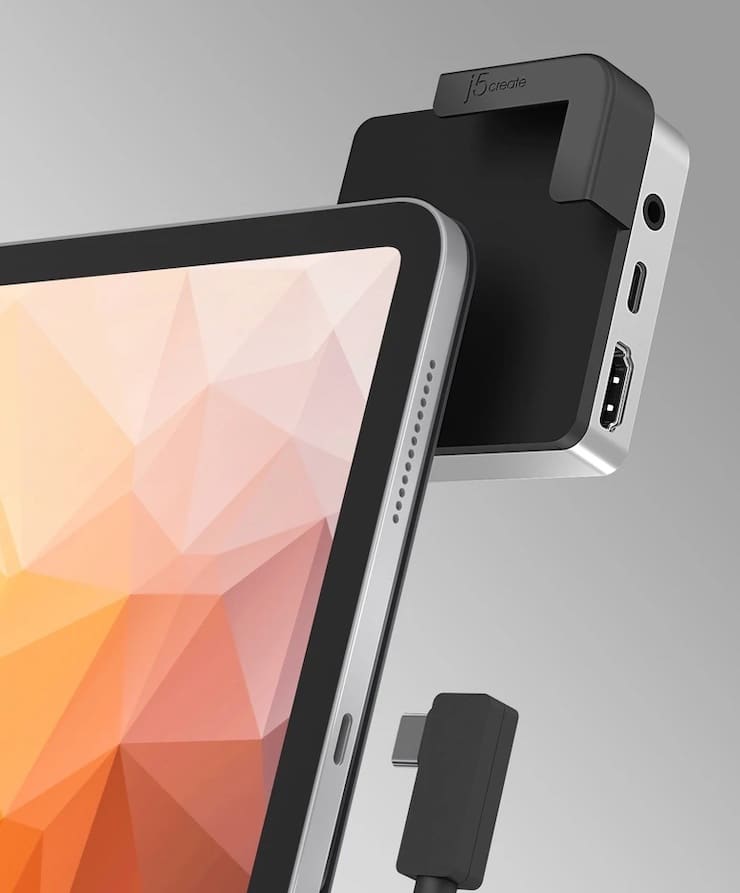 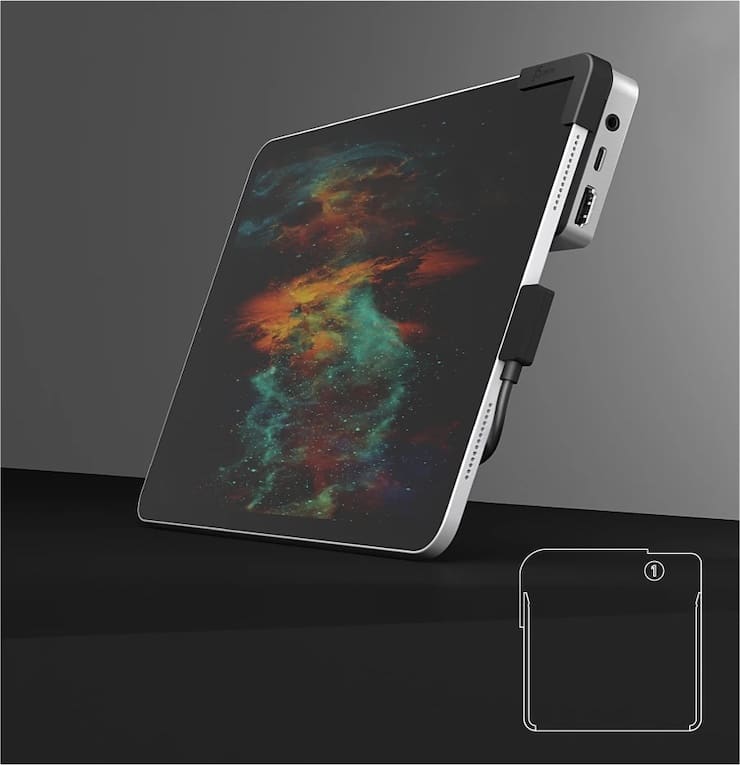 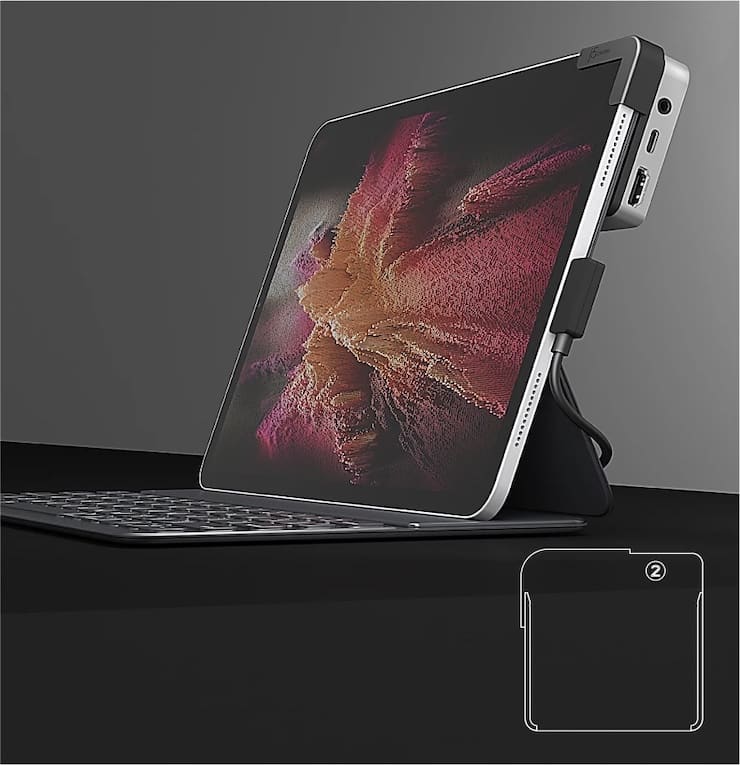 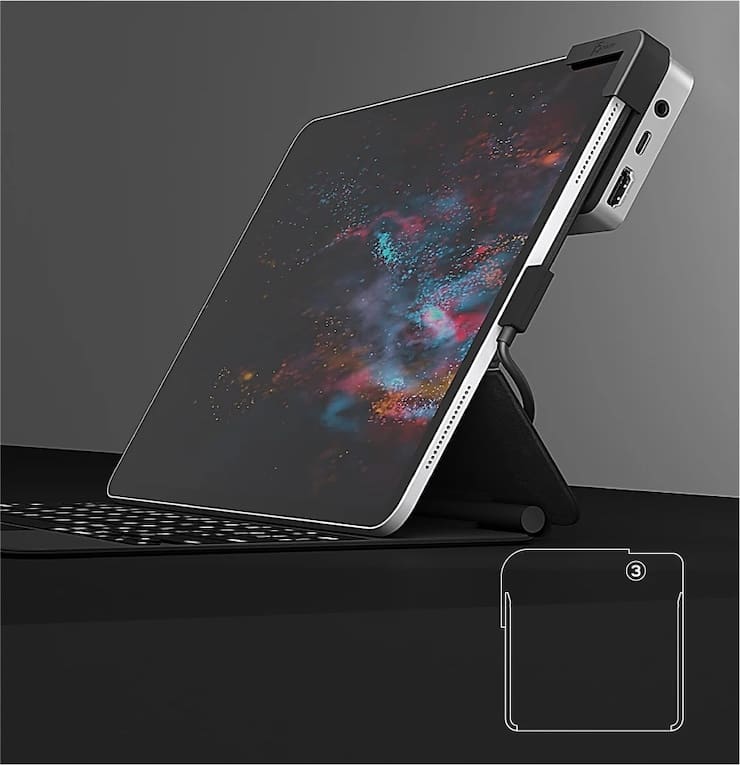 Each attachment weighs only 10g.

The dock is designed to work with the iPad Pro 11 or 12.9 in combination with a variety of branded keyboards. At the same time, of course, other scenarios of JCD612 operation are possible, including with other devices. But hardly anyone wants to abandon the interaction option implemented by the j5create engineers. So, depending on the thickness of the iPad Pro with or without a case, the corner of the nozzle sits on the corner of the tablet itself, sitting behind it. The 20-centimeter tail with a little headroom is enough to connect the dock to the iPad Pro’s USB-C port. 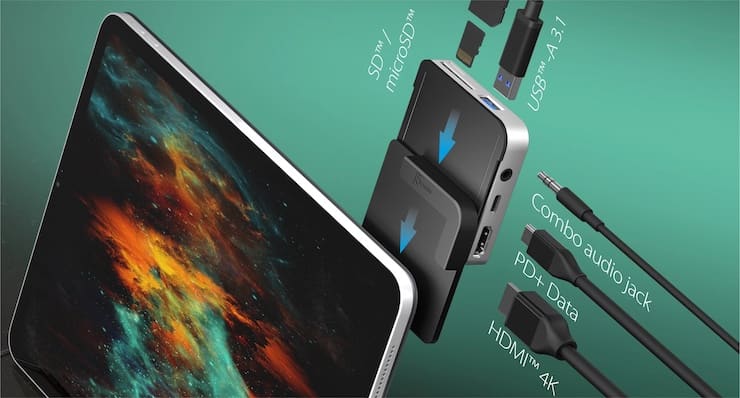 Thus, the additional device does not interfere with the user, does not take up unnecessary space, nothing dangles at hand, and additional ports appear next to the upper right corner of the tablet:

USB-C ™ Power Delivery with charging power up to 100W supporting data transfer rates up to 5Gbps… You can connect a cable from a charger with a power of up to 100W to this port, and the docking station will transmit current through its USB-C cable already to the tablet. Thus, it will be charged, but other ports will remain available for operation. The dock will only supply power to the USB-C port that supports receiving power. Data transmission through this port is possible at speeds up to 5 Gbps. It is worth noting that the power consumption of the docking station itself is 500 mA. 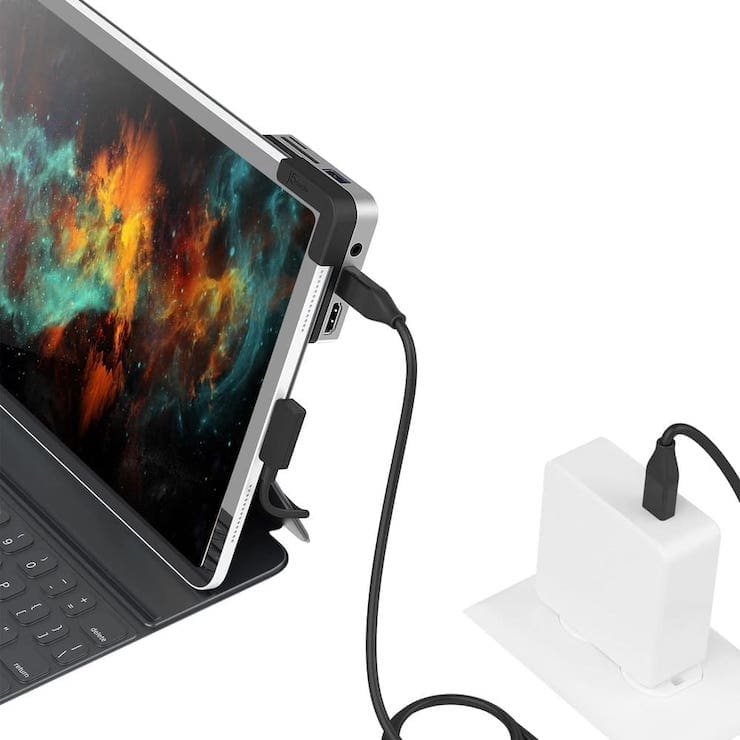 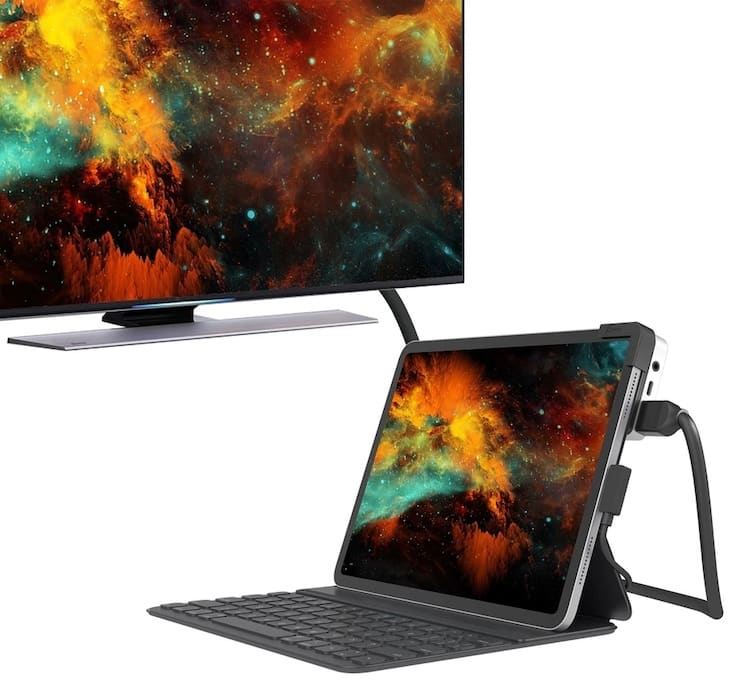 USB-A 3.1 port allows for high-speed data transfer (up to 5 Gb / s), which is more than 4 times higher than the capabilities of the outdated USB 2.0. This port can be used to connect external media, mouse, keyboard and other devices. 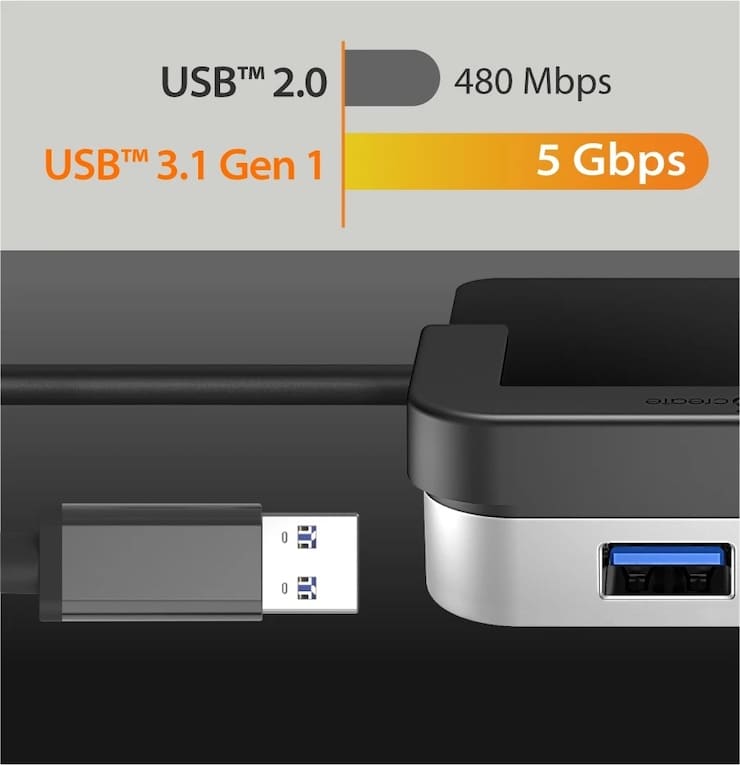 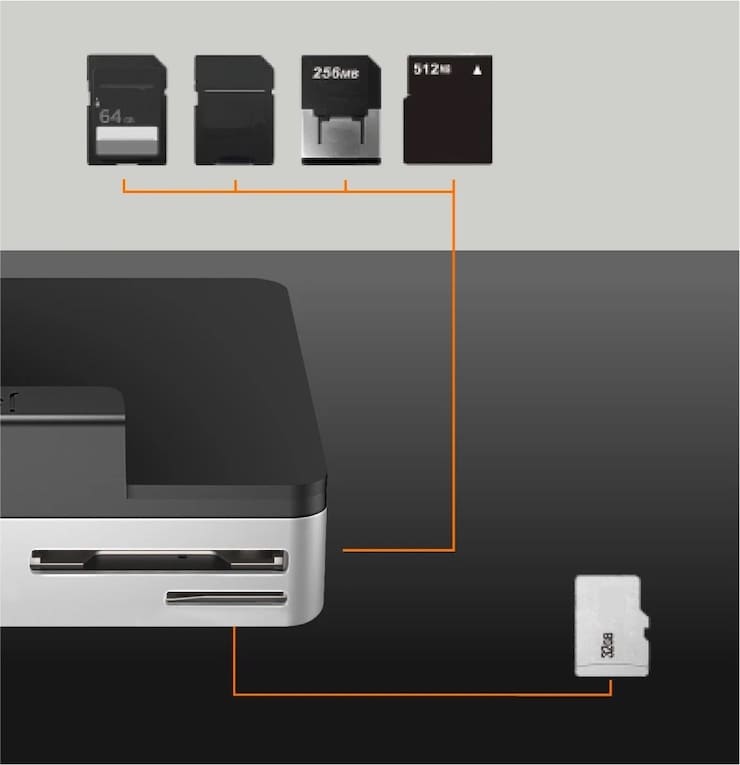 Combo 3.5mm audio jack for connecting headphones or a microphone. In the case of simultaneous connection of cables to HDMI and 3.5 mm audio, the latter is given priority. 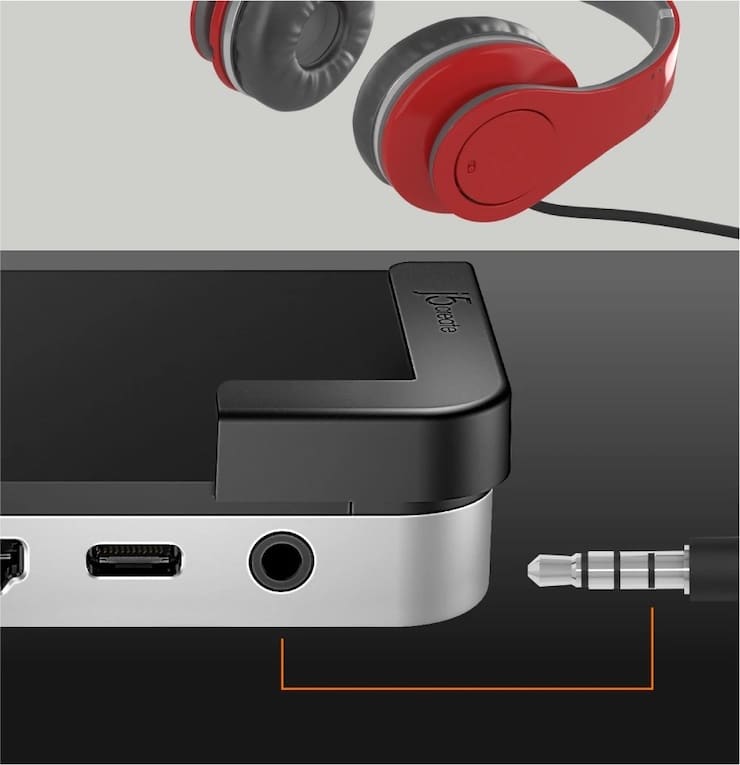 While the docking station is designed for use with the iPad Pro, it can work in conjunction with other computers and laptops. Having taken one USB-C port for its needs, the docking station will give additional 7. Of course, there is no need to talk about a convenient mounting – the docking station without overlays will simply lie next to the computer or laptop. But its compact format will not make the bundle too bulky. 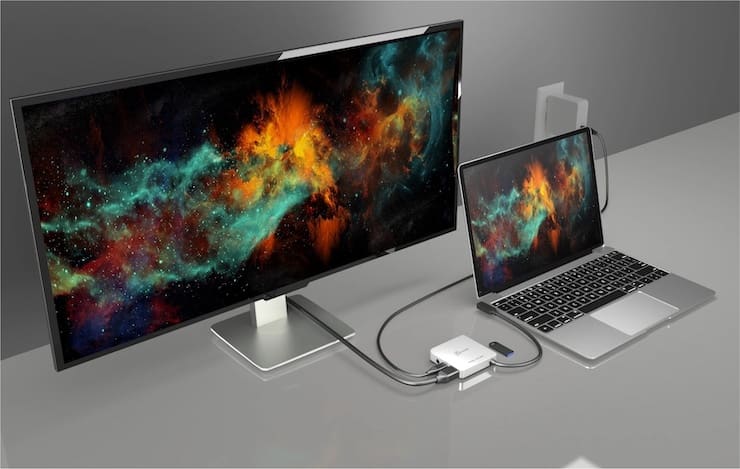 To ensure maximum performance of the device, especially when transferring a large amount of information, it is worth connecting the power supply to the docking station via the USB-C PD 3.0 port. At the same time, during intensive work, it can heat up to a moderately hot, but non-critical temperature.

J5create has introduced another device to improve the functionality of Apple products. This time the focus was on the iPad Pro. The manufacturer thoughtfully approached the question of the design of its docking station, equipping it with three options of overlays at once for various scenarios of equipping the tablet. The desire to provide the best combination of two devices, even from the point of view of physics, is obvious. The colorful packaging is a great helper even for uninitiated users, explaining and showing how to connect the JCD612. The ports themselves may not be striking in their number, but at the same time they are really the most necessary when working with the iPad Pro – allowing you to connect a variety of devices and storage devices to it, output sound and picture, and skip power. The JCD612 docking station from j5create is smart, compact and functional.