Gradually, even Apple began to understand that the webcam in laptops is an important working tool. Increasingly, people are communicating via videoconferencing rather than in person. You can criticize such a trend, but it is impossible to deny its usefulness – people from different parts of the world are getting closer to each other. No one bothers to hold a workshop between employees living in different countries. 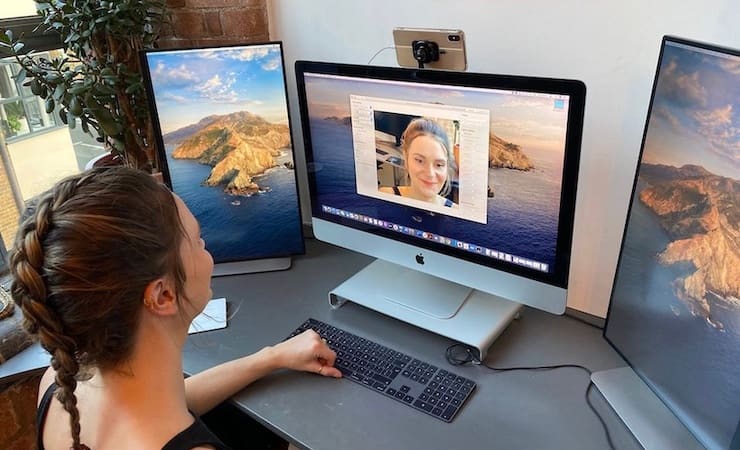 ♥ BY TOPIC: Shut down or put your Mac to sleep?

True, the progress of cameras in Apple laptops is slow. Only since 2021, the MacBook Pro has received webcams with a far from record-breaking Full HD resolution, and many previous models are completely forced to be content with 720p cameras. But there is a way out, because almost always at hand there is a smartphone with a much more advanced camera. The Detail application will allow you to turn your iPhone camera (main or front) into a webcam for Mac. So you can easily improve the quality of broadcasts and streams without the need for an upgrade.

The app requires a Mac running macOS Big Sur 11.4 or later. The installed utility will be identified as a camera. She will broadcast the video shot by your iPhone, camera or some other USB-connected device. In order for iOS devices to work with Detail, you need to install a special companion application there, and then connect to the laptop via Wi-Fi. Devices must be on the same network. The client utility will require iOS 13.0 or later. Communication with cable at all optional, but it is able to give a better and better picture due to a more stable connection.

By default, on a Mac, the Detail app window will show video captured by the Mac’s built-in camera. To turn on the image from the iPhone camera, you must:

1. Launch the Detail app on iPhone (links at the end of the article) and connect to a Wi-Fi network (shared with Mac) or use a cable.

2. Allow the program to access the microphone and camera of the iPhone. 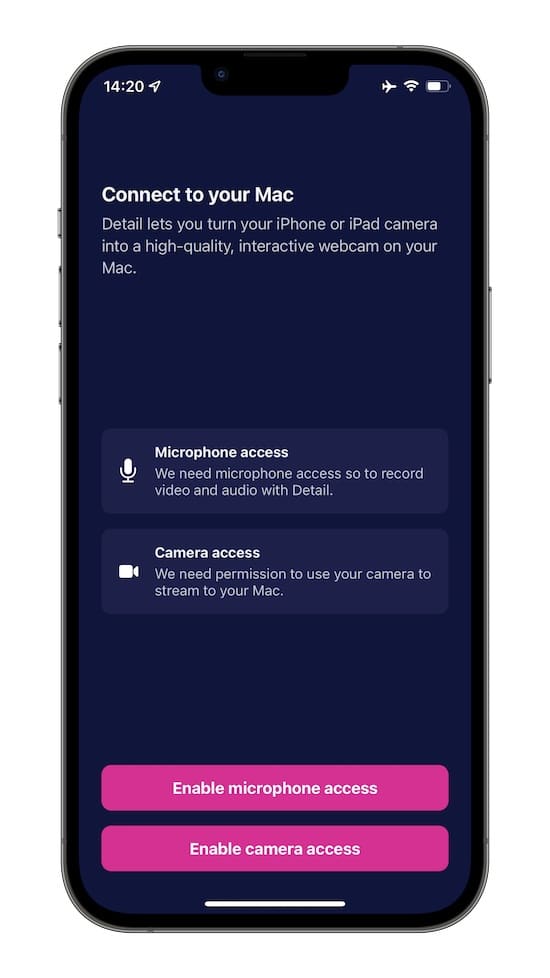 3. Press the button Scan network for Detail for macOS to search for a running Detail app on a Mac. 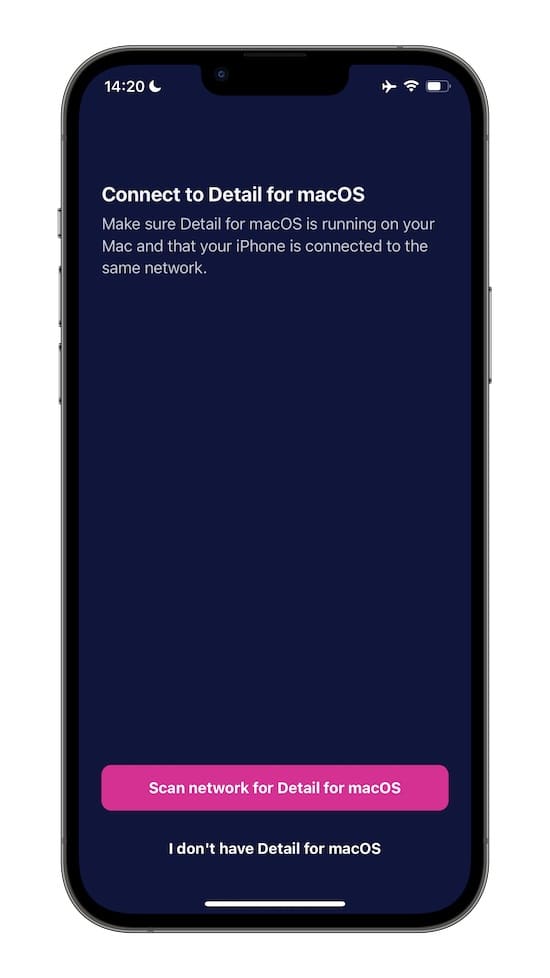 4. After detecting Mac, click the button Connect to device. 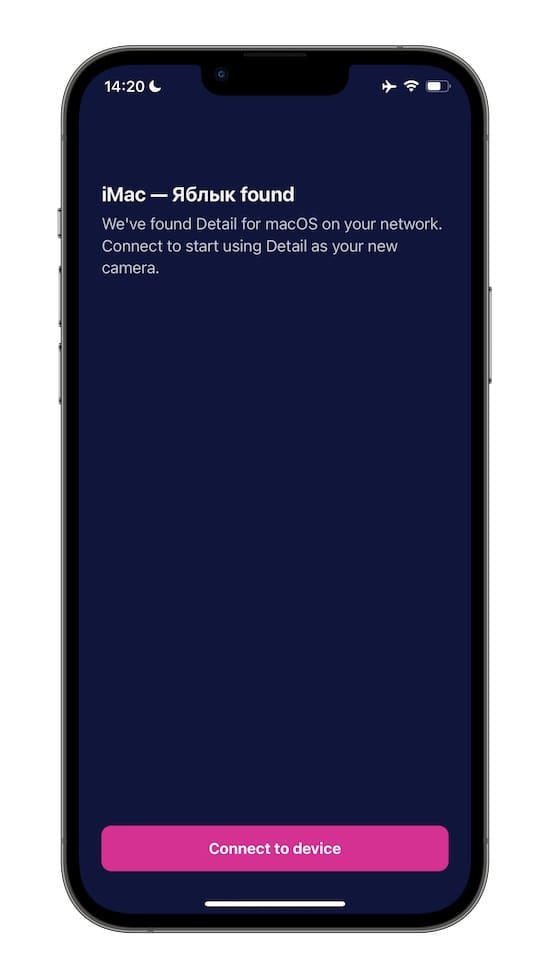 The image will appear on the iPhone. There are no special settings on the mobile device itself. Here you can only find the connection status, but the viewfinder for the simplest preview of the picture. 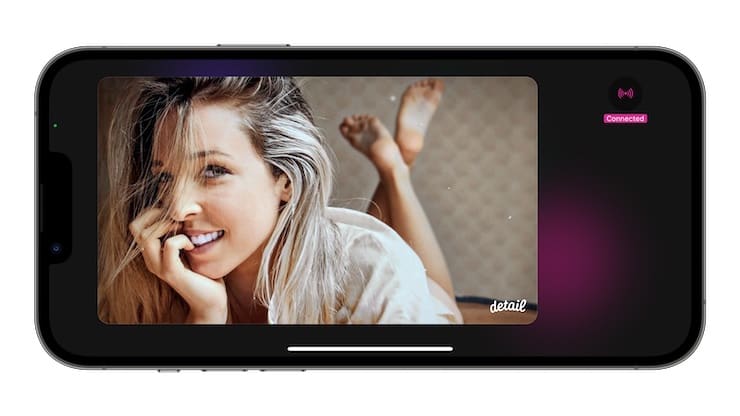 5. If you want the iPhone camera image to be displayed in the current scene (window), then hover over the Mac Detail application window and click Camera on the toolbar that appears and select the iPhone camera. 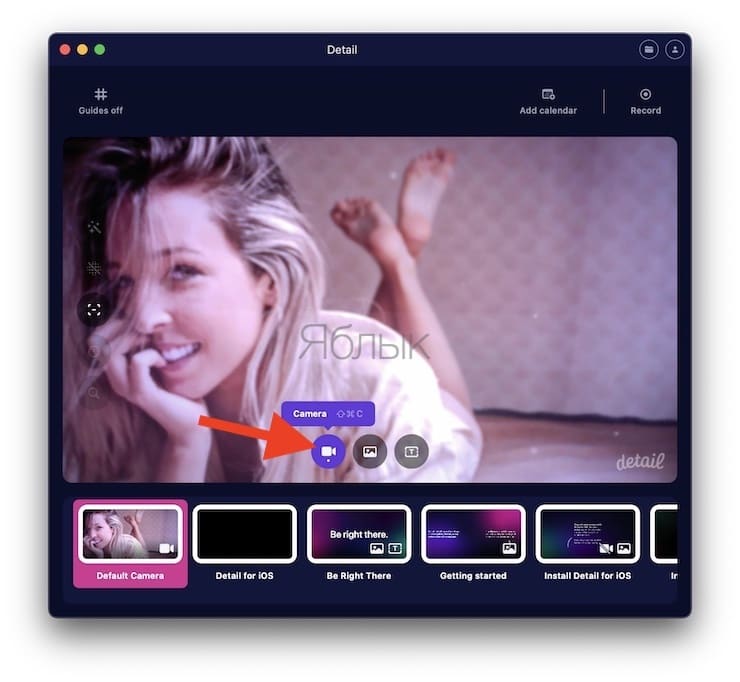 If you want the iPhone camera image to be displayed in a separate scene, then select an empty topic called Detail for iOS and in the menu that appears, select the option camera. 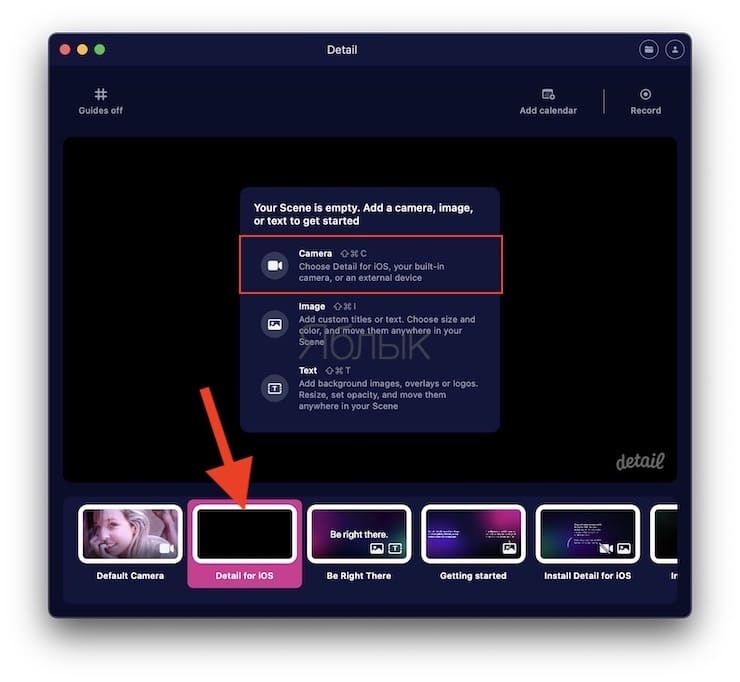 6. Use the buttons below the thumbnail to switch between iPhone camera lenses (telephoto, wide, front, etc.). 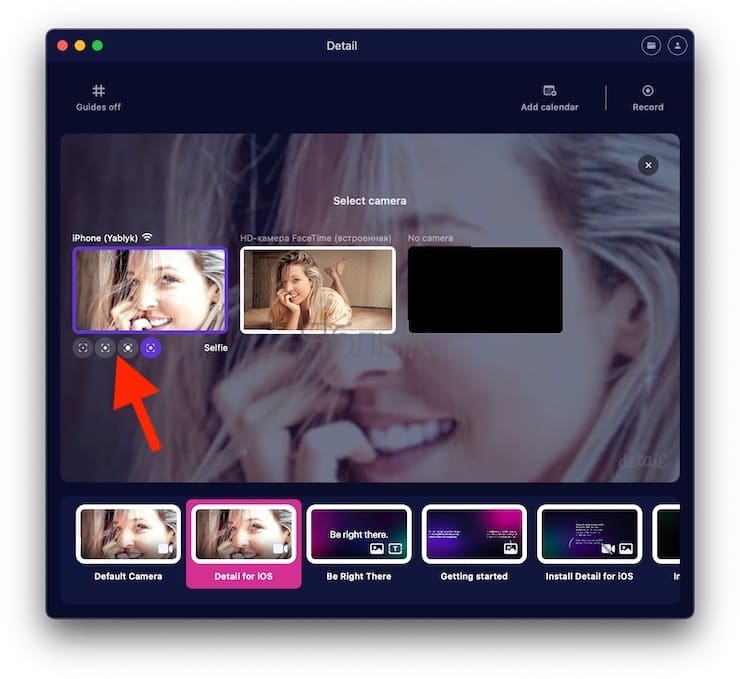 There are also recording buttons, you can turn on the display of guides in the frame for a better layout. The application allows you to use filters, zoom and cinematic blur. 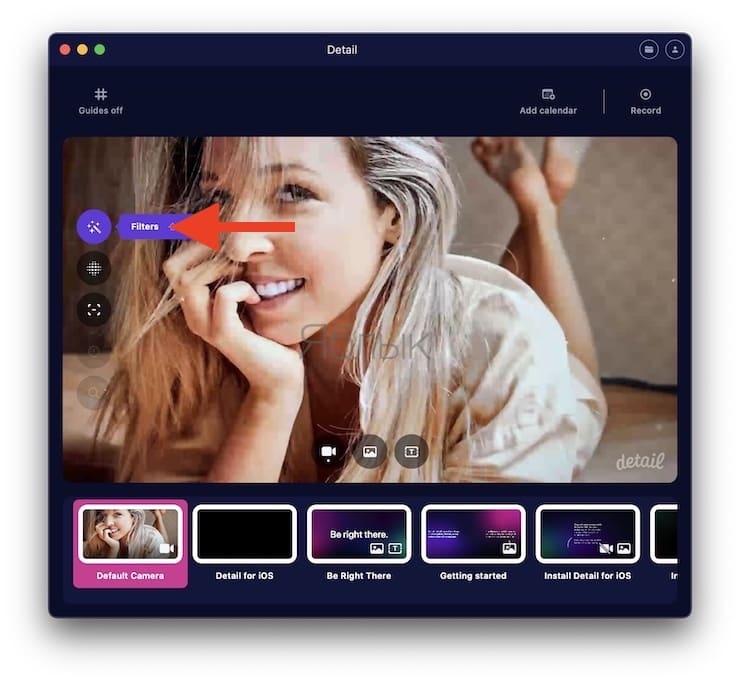 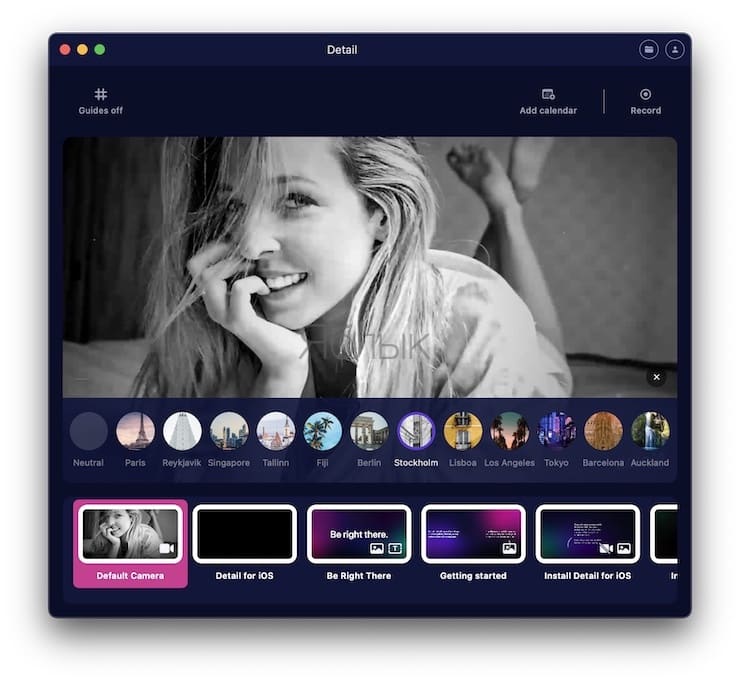 At the bottom of the Detail window, you can see a carousel of scenes. In fact, these are already pre-configured options for sources and effects. You can quickly switch between them.

See also  Chrome by default in iOS, or how to open links in Google Chrome on iPhone or iPad

By clicking on the “+” at the bottom of the window, you can create your own scene. The app will prompt you to add a camera, image, and surface text for it. Click on “Camera” or Shift + Command + C to add a camera to your scene. And to edit an existing scene, click on the camera icon in the menu or use the combination Shift+Command+C and select one of the available cameras.

And to start using a third-party camera in video conferences or streams using Detail, select this camera among those available on your computer. Detail Camera will appear as an option for video setup immediately after setting up the app. It supports many specialized services, including Zoom, Google Meet, Skype, Twitch, YouTube, and more. In fact, any program in which you can select the video source can work with Detail. 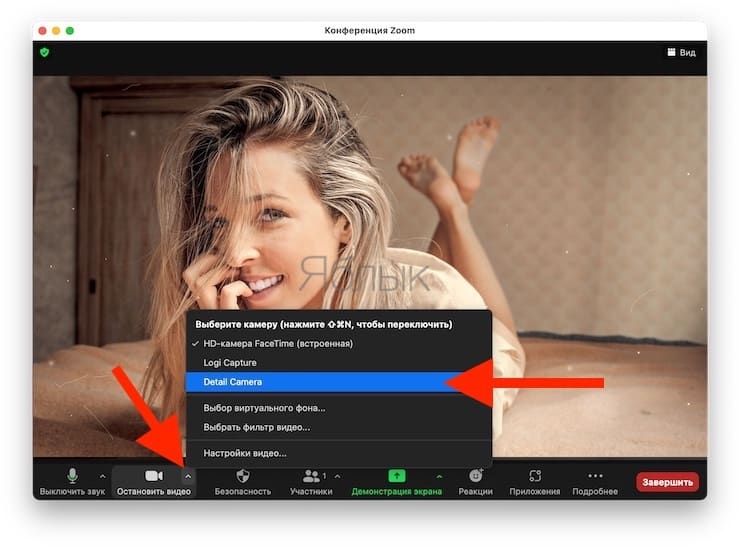 An example of connecting an iPhone camera to Zoom using Detail

Among the interesting additional features of Detail, it is worth noting video recording. This will certainly come in handy when creating screencasts with comments. Detail can sync with your Google calendar to quickly jump to appointments.

The beauty of the app is that it free. But Detail will only work under macOS. The application has no paid features, and there are no ads in it. The developers only allowed themselves to impose a barely noticeable watermark on the video in order to at least promote their product in this way.