One of the small iOS chips, which for four years helped in working with iPhones, actually retired in 2019.

The loss is not the biggest. But the sediment remained.

With the transition to the iPhone XR, iPhone 11 and 11 Pro, I and you have to get used to another usability.

And personally, I am still very sorry.

Which iPhone models had 3D Touch?

For the first time, a chip called 3D Touch was introduced with the iPhone 6s in 2015. Then the minor update of the iPhone came out really weak, many users did not want to update the smartphone because of the slightly updated filling and the dubious option with a strong tap on the screen.

In recent years, 3D Touch has not received only two models of Apple smartphones: iPhone SE and iPhone XR. In the first case, this was attributed to a too compact body, and in the second, to reluctance to raise the price of a model with a pleasant price tag.

This fall, all presented iPhone models have lost 3D Touch. The prerequisites for this were in the first test versions of iOS 13, when a similar feature called Haptic touch replaced 3D Touch even on supported smartphones.

The new iPhone 11, 11 Pro and 11 Pro Max models no longer recognize the force of pressing the screen. Instead, a long-press gesture appeared at the software level, which in most cases replaces 3D Touch.

Along with this, Haptic Touch appeared on the iPad, and on older iPhone models (6s / 7/8 / X / XS) it exists in parallel with 3D Touch. This neighborhood is sometimes very annoying.

What useful was the 3D Touch. In my opinion

In the first year of existence, he considered the chip useless and overrated by Cupertin’s marketers. In addition to reviving beautiful fish on the iPhone lock screen, it was difficult for her to come up with a useful application.

Later, iOS developers tightly integrated the new gesture into the system, and the creators of third-party applications added strong pressure support to their programs and even games. With the move to the iPhone 7 Plus, I’m very used to such chips and now I feel discomfort due to their absence in new models of Apple smartphones.

Here are the handy gestures that I’m used to using for several years with 3D Touch:

1. Quick calls from the home screen

If you strongly click on the icon of the standard dialer, we get a widget with the first four contacts from the list Favorite. So in a split second you can call friends or relatives instead of launching the application, go to the Favorites tab and make a call from there.

2. Message or call through the messenger from the phone book It has long been used to starting a conversation or correspondence with friends from the standard Phone application. A strong tap on a contact opens a menu with the ability to go to the Messages, Skype, Viber or Telegram application.

So you don’t have to look long for a contact in each application with a different interface and control logic. Previously, this was only possible with jailbreak tweaks from Cydia, but the Cupertinians realized the chip much more conveniently thanks to 3D Touch.

Strong pressure on the iOS virtual keyboard allows you to quickly move the cursor over the text, and even more pressing leads to the selection.

4. Quick settings for flashlight and Do Not Disturb In the control center, a strong press on the flashlight icon allows you to adjust its brightness, and pressure on the Do Not Disturb mode button allows you to set it to automatically turn off after a set time or according to a schedule. This feature works almost everywhere. The link can be “opened” in Safari, from an email client or even a messenger. A strong click on a photo or other content will show it in a preview without going to a browser or other program.

6. Go to the desired section in the Camera application The standard camera on the iPhone is not burdened by additional menus and dialog boxes, the transition between shooting modes is carried out by simple swipes to the right or left.

However, on aging iPhones, the camera starts up not so fast, you have to wait a couple of seconds before loading the current section, and only then go to the desired shooting mode. With 3D Touch, you can immediately launch the camera in the desired mode, which will save an extra second or two for a successful frame. 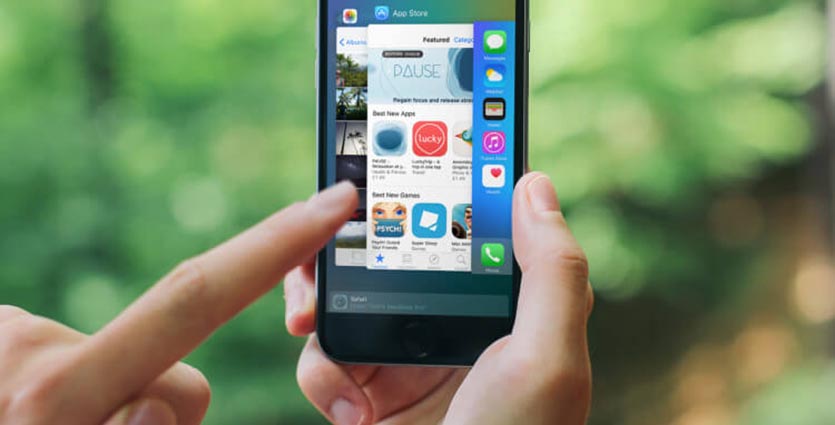 One of the most controversial features of 3D Touch. Some adored her, others were not used to using it. I used the chip with varying success.

A strong press on the left border of the screen with a swipe to the middle allows you to switch between running programs or call up the multitasking menu. The 3D Touch menu in Safari allows you to quickly launch a new tab in Incognito mode. Without a menu, you have to launch a browser, open the page view mode and only tap on the button to launch the desired mode. 10. Quick launch of the application This also saves a second or two each time you start programs. And in the system settings, you could set a comfortable sensitivity of the chip. If you couldn’t use 3D Touch, you could always raise or lower the threshold.

Picked up the idea and the creators of the games. In some projects, 3D Touch was added just in the wake of the popularity of chips, and in some it really harmoniously fit into the gameplay. Let me give you two most memorable examples.

Hardcore car simulator GRID was a real breakthrough on a mobile platform. The game pleased on PCs and consoles, and the transfer to the screens of the iPhone and iPad caused a real delight among fans.

With disabled control assistants, it is really difficult to cope with a car in drift mode without a gamepad. 3D Touch came to the rescue here. The power of pressing the screen has become the equivalent of pressing the gas pedal in the game.

At first, getting used to the chip was very difficult, but then one really helped. I specifically included such control exclusively for drift competitions, where you need to constantly change the degree of acceleration of the car, and with simple tapes on the screen to achieve the desired result will not work. The second successful example was PUBG. Owners of the iPhone with 3D Touch got a nice bonus in the form of a convenient way to control the game.

When you turn on the strong press, the player can swipe on the right side of the screen to control the overview, and for shooting just clamp 3D Touch. For shots, you no longer need to look for a special button, you can press hard anywhere. This makes it possible to simultaneously aim and shoot, which is extremely problematic without 3D Touch.

Not! All the chips of strong pressing the screen came down to saving an extra second in routine operations that are performed hundreds of times a day.

Fractions of seconds were saved when calling selected subscribers, extra seconds did not go to search for contacts in instant messengers, time was not wasted opening separate tabs to view attached content. It was possible to save seconds when starting a specific camera, browser or stopwatch mode.

None of the 3D Touch chips gave significant savings and convenience (not counting games), it only allowed you to do familiar operations faster. Haptic Touch is not found in all places where 3D Touch was previously, and at the same time you have to spend seconds activating the menu or opening links.

You will not get any increase in the speed of working with the gadget. If we talk about games, the Cupertinos simply killed a cool chip, which often made it possible to do without game controllers.

By abandoning 3D Touch, Apple put an end to additional gaming features and useful small chips that we have been accustomed to for years. I think Haptic Touch is not the most successful attempt by Cook and the company to repay the dissatisfaction of users who loved 3D Touch.

Use in this form the usual menu and additional features of the system makes no sense.

In general, you can live without 3D Touch. But it’s still a shame.