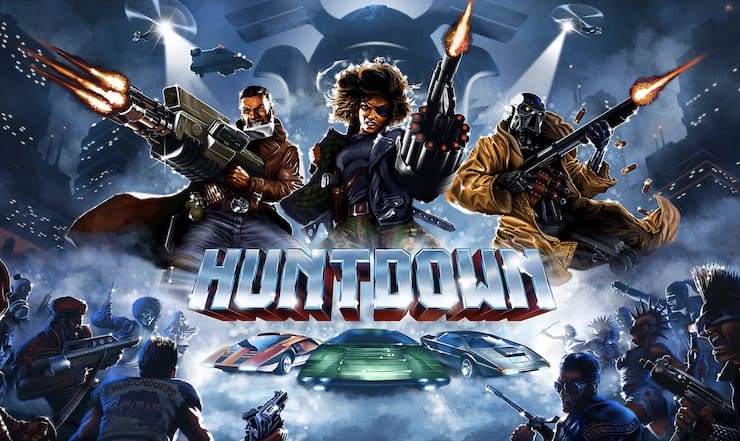 Perhaps one can easily explain the rise in popularity of retro games. Despite the clearly simplified graphics in relation to their modern heavyweight counterparts, these products have their own attractive magic. As a result, teenagers become interested in playing something new and seemingly primitive, just for the sake of switching focus. And the older generation, in search of leisure, returns to those games that filled time with themselves a long time ago.

In addition, it makes it possible to regain lost feelings and emotions and again feel like a child, whose eyes light up from the opportunity to play on the console. And the quality of the graphics here fades into the background, especially since the game mechanics have not gone anywhere and still require attention, reaction and are able to give joy from playing in co-op and killing a difficult boss. The number of retro games is growing, different emulators are multiplying, and the good old 16-bit consoles are on the shelves again. It is these motives that prompted the Swedish studio Easy Trigger Games to release the game Huntdown. 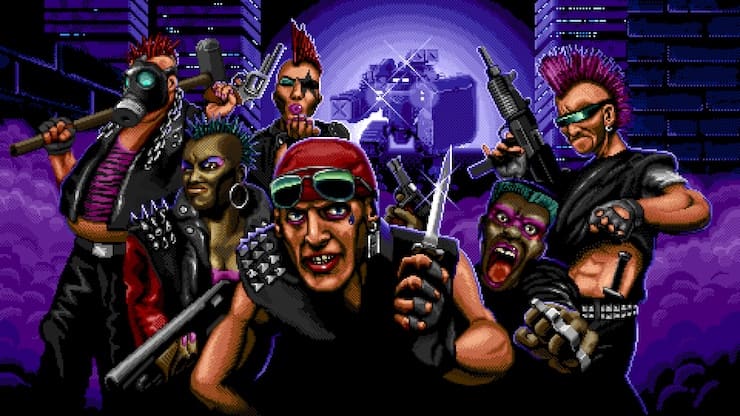 The Huntdown game itself is a 2D shooter. There is not much to be surprised at – there were not so many genres and possibilities then, so almost half of the games copied the mechanics of each other. And 2D shooters stood out for their popularity. The essence of such games is clear – through labyrinths and obstacles to make your way to the end of the level, shooting in different directions, destroying hordes of enemies.

At the start, the game offers to choose one of two modes – Arcade and Story. For beginners, it is better to choose the second mode, which is clear and classic. In arcade mode, you can compete in a set of points or start a co-op. Then you need to choose one of four difficulty levels – the higher it is, the less lives you will have. At the very beginning of the game, we are asked to choose one of three heroes. And here we can already fall into thoughtfulness for a while, because the characters differ both in their history and in their fighting skills. For example, Anna Konda is a 32-year-old Special Forces soldier, a brave woman specializing in firearms (very handy, isn’t it?). Her pistol fires in short bursts. John Sawyer is a veteran, 148-year-old police officer who lost several body parts in battle, but was partially restored with mechanized prostheses. He prefers not to trade in turns, rarely shoots, but deals a lot of damage. Finally, the 7-year-old scout droid Mow Man prefers to scribble with a submachine gun.

A small plot sketch is quickly replaced by immersion in the action itself. We find ourselves in a certain world of the future, where legality has clearly faded into the background or even the third plan. Here the main one is who has strength, or rather, a weapon. This world corresponds in its spirit to the films of the 1980s, the same “Blade Runner”, “The Terminator” or “Judge Dredd”.

Cityscapes are strewn with graffiti and illuminated with neon. And the most striking here are not gentle, spiritualized personalities, but the most frostbitten ones – all these punks, hockey hooligans, karatekas and bikers. 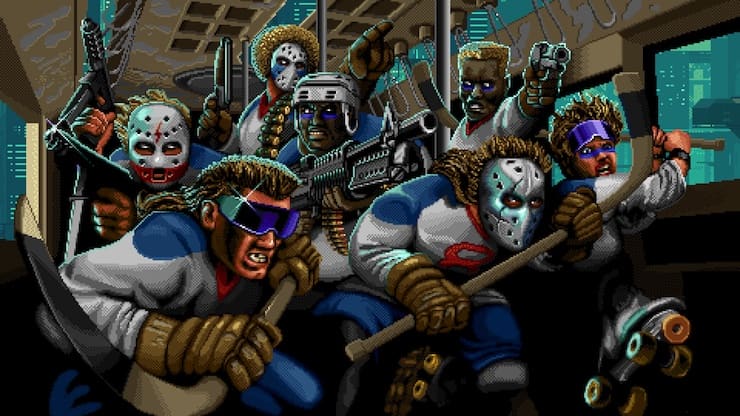 Through their hordes, we will have to make our way to the boss of the level. On the way, there are quite a few checkpoints and various events in which we will have to help the cops and put things in order. Either the street was blocked by colorful bandits, hiding behind a bus, then the enemy will simply run away from us, taking with him a valuable case. The two-dimensionality of Huntdown implies movement not only to the right and forward, but also up and down – there is where to jump and practice your eye. 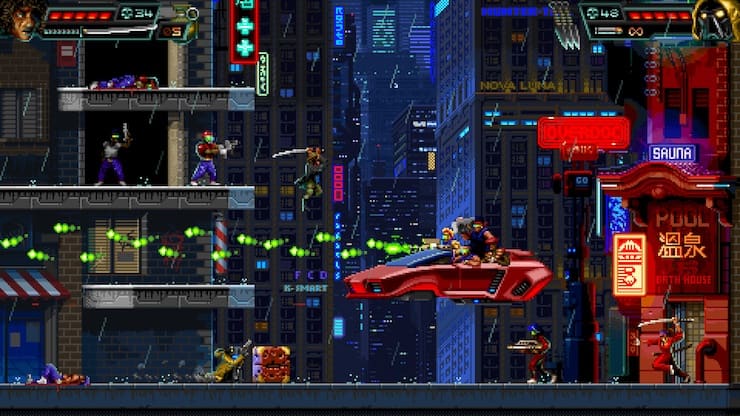 Visually, everything looks bright and even with a touch of grotesque. And this is understandable – the background is an integral part of the game, which forms its flavor. The visuals aren’t full of details, but we’re talking about a retro game in the style of 8- and 16-bit consoles. But the sound is quite helpful for the immersion. Obviously synthetic disturbing losses are mixed with the cues of the villains, the sounds of numerous events.

An important part of the game is its interactivity. Bullets leave marks on the walls, bottles can scatter into fragments from an unsuccessful hit, barrels explode, opening caches, an alarm is triggered, and even shelters are saved only for a while. All this really revives the world, which now does not seem to be a background, but appears as a full participant in the events. 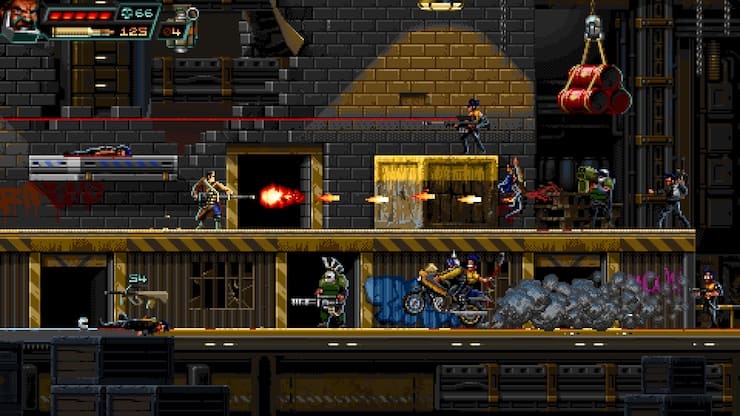 At first, the gameplay seems simple, and most of us have some experience in much more complex shooters. Run, shoot, dodge, find cases with money, and change weapons. Of course, you will have to tinker with the bosses. But gradually the game becomes more complicated, which creates the effect of involvement. It turns out that the enemies are becoming inventive and shelter is not a hindrance to them, and the range of weapons is expanding. Taking into account his proposal, you have to puzzle over which option to use against which enemy. The opponents themselves are very diverse, differing in both skills and colors. At the end of each level, a boss is waiting for us in the arena. Each of them has its own peculiarity – phases, armor, manner of fighting. You will not be able to pass the arena on “relax” – you will have to tinker. 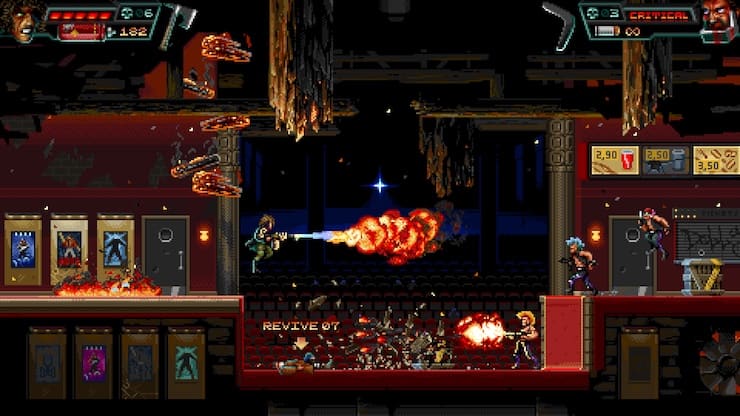 The game Huntdown with a banal plot, albeit bright, but banal graphics, for some reason gets rave reviews from players and critics. The thing is that the creators tried not only to make a dull tracing paper from a retro game, but also to create it in accordance with the modern desires of gamers. Here you will not find a situation where death at the end of the level forces you to go through it again or the difficulty level goes off the scale. Long gone are the days when level design standards were just being formed and you could experiment with them to your heart’s content. Today the player knows what he wants, certainly not to get upset in vain because of the negligence of game designers. The levels themselves are quite passable, it will take 10-15 minutes to overcome each of them. This is just enough so as not to get tired of them. And with death, the loss of progress does not seem excessive – the player wants to repeat the test again and again, simply by changing the plan of action. This approach contains respect for gamers and for their time, which cannot but be tempting. 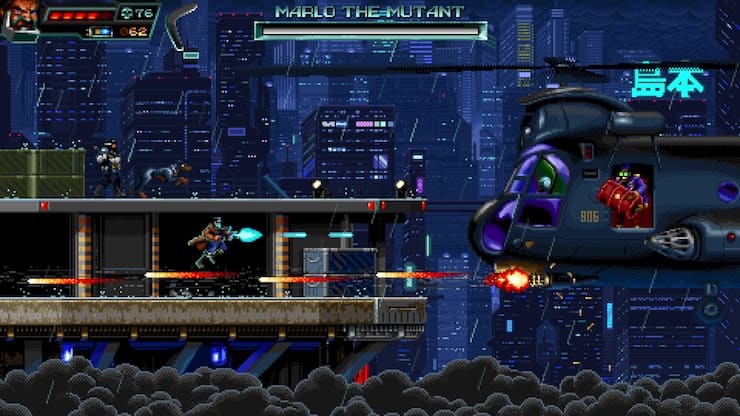 Huntdown is a success. The developers have kept the spirit of retro, which allows you to return to the atmosphere of the distant 1980s. At the same time, the game did not become a blind tracing of past hits, important details were carefully and accurately introduced into it, which allow modern players to pay attention to it. The experience gained in the game industry has helped to create a hit that will surely not make you bored. And if you’ve completed the Huntdown, but you still have a slight feeling of dissatisfaction, try the arcade or co-op mode, so the game can open up to you in a new way.