Most users of apple technology have to deal with the program iTunes (now on Mac, the Music app and Finder do it.) It is designed not only for flashing iPhone and iPad, but also for storing a media library, making purchases, listening to music, creating backups, etc. 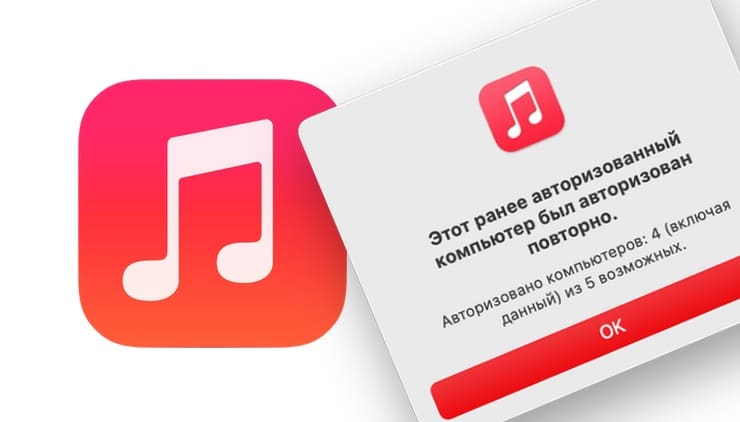 ♥ BY TOPIC: How to recognize people you know in photos in Photos on Mac.

If you have one or two computers, there is nothing to worry about. However, if you often have to change work PCs or like to access Apple services (for example, Apple Music) from different places, sooner or later you will have to figure out how to authorize and deauthorize work machines.

The fact is that Apple allows users to connect to one account no more than five computers… This means that you can “link” several computers to your account, through which you can access all data from the iTunes Store cloud with downloaded applications, purchased music, as well as Apple Music.

The computer will be authorized during the first actions with the Apple ID account. This can be playing music “from the cloud”, purchasing an application, etc.

Please note that if you have several installed operating systems on your computer, you will need to “bind” the PC in each of them.

Apple started all of this as part of its anti-piracy program. If the system monitors computers strictly, then with mobile devices everything is not so strict. This is where the general Apple ID accounts and the purchase of applications for one account went.

When the limit of five computers is exhausted and you try to “link” the sixth to your account, you will be prompted to “unlink” one of the previously activated ones (for this you need to go to iTunes (Music applications on Mac) from it) or reset all computers at once. This is convenient if you are logged into a friend’s PC, to whom you need to go, or one of the “tied” PCs is sold or there is no access to it. Together with them, your home or work computer will also be unlinked from the Apple ID.

How to bind (authorize) or unbind (deauthorize) a computer?

Linking your Mac or Windows computer to your Apple ID isn’t difficult. To do this, go to the Music application on Mac (iTunes on Windows) and select “Authorization “ → “Authorize this computer … “ from the menu “Account”… Please note that the line with menu items has recently been hidden for Windows PC, to display it, press “Alt”.

Then you should press the button “Deauthorize All “, then the required computers must be authorized again. Please note that this procedure can be performed no more than once a year. These terms are set out in Apple’s user agreement. Deactivating all PCs it is advisable to do it as a last resort. For example, if a sold or lost computer remains tied, or you need to untie a PC on which the OS was reinstalled.

You can also re-authorize within a year. However, this will have to be done through contacting Apple Support.