Unlike Windows, on macOS there are several standard ways to take a screenshot not only of everything that is on the display, but also of individual areas of the screen. In this article, we will tell you which program you can use to do this and which keyboard shortcuts to use.

♥ ON TOPIC: How to Record Video from Mac Screen (macOS): 2 Ways.

How to take a screenshot using the “Screenshot” program on macOS Mojave and newer (for other versions of macOS, instructions below)

Screenshot – standard utility for taking screenshots. Forget about Windows’ PrintScreen and Paint. Apple has done everything in a simple and elegant way.

1. Open the program Screenshot… The application can be found along the way Finder → Programs → Utilities → Screenshotvia Spotlight or Launchpad search. 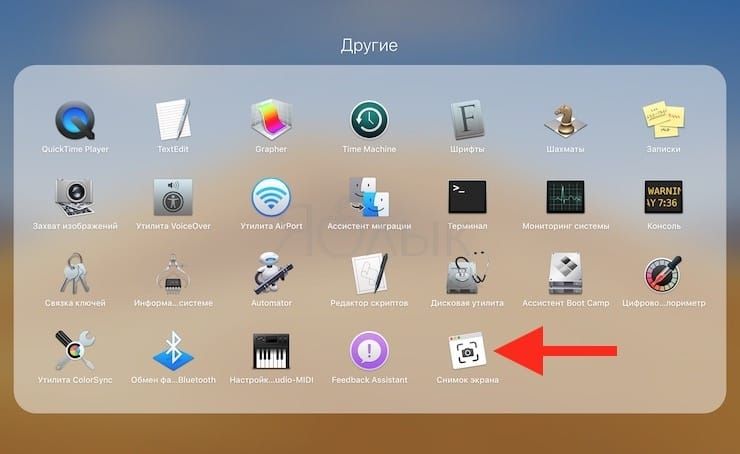 Starting with macOS Mojave app Screenshot can also be launched with the keyboard shortcut ⌘Cmd + ⇧Shift + 5 on keyboard.

The application attracts with its ease of use and compactness. Once launched, a toolbar will appear at the bottom of the screen.

2. Select one of the following options (screenshot above): Full Screenshot, “Snapshot of the selected window” or “Snapshot of selected area”… 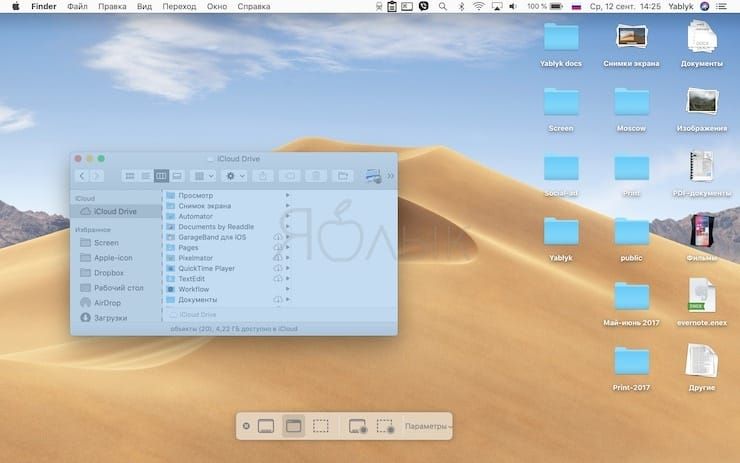 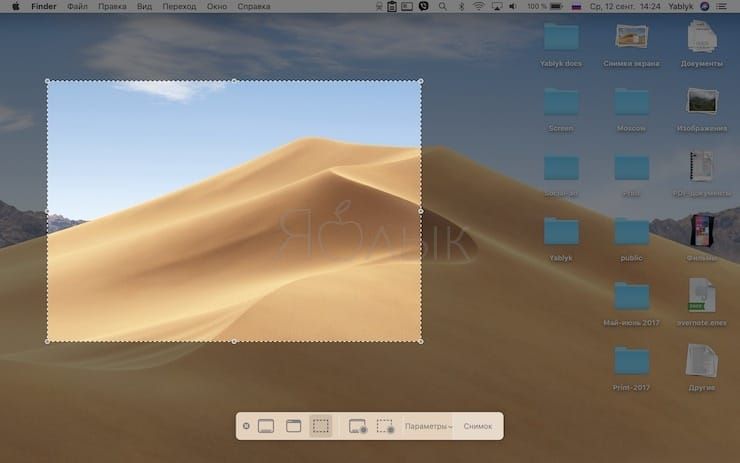 When choosing Capture the entire screen you will get a screenshot immediately if you don’t set a timer.

3. Click on the box or mark a portion of the screen if you selected one of the remaining options. Your screenshot will be taken immediately after selection.

4. If necessary, right-click on the resulting screenshot thumbnail in the lower right corner to open the context menu. 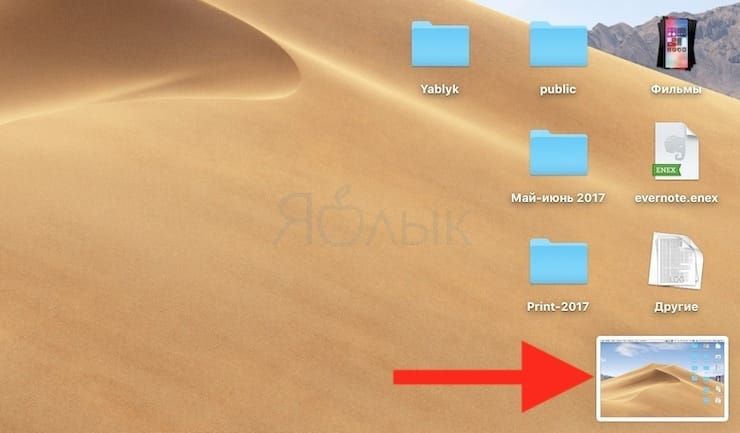 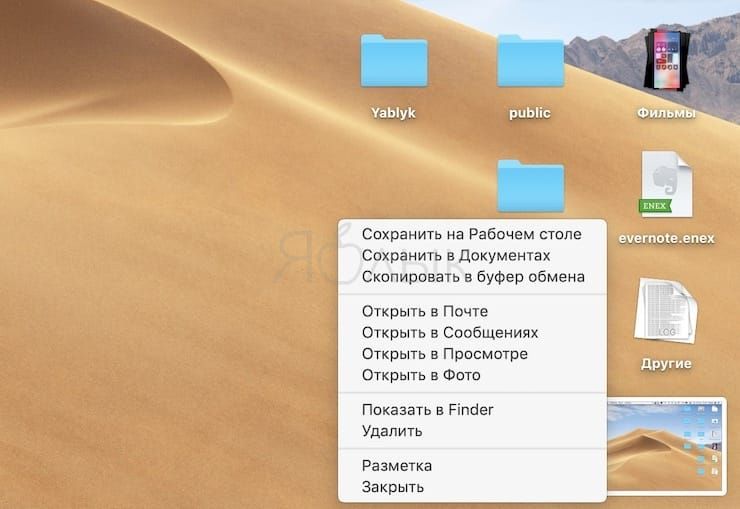 Use the context menu to choose where to save the screenshot, as well as send, edit, show in Finder, delete, or mark it.

♥ ON TOPIC: 10 cool features of iPhone + Mac pairing when used together.

Although you can choose from a limited set of locations for saving screenshots and recordings after they are taken, in the new version of the OS you can also make a default choice.

2. Press the button “Parameters” on the panel that appears at the bottom of the screen. 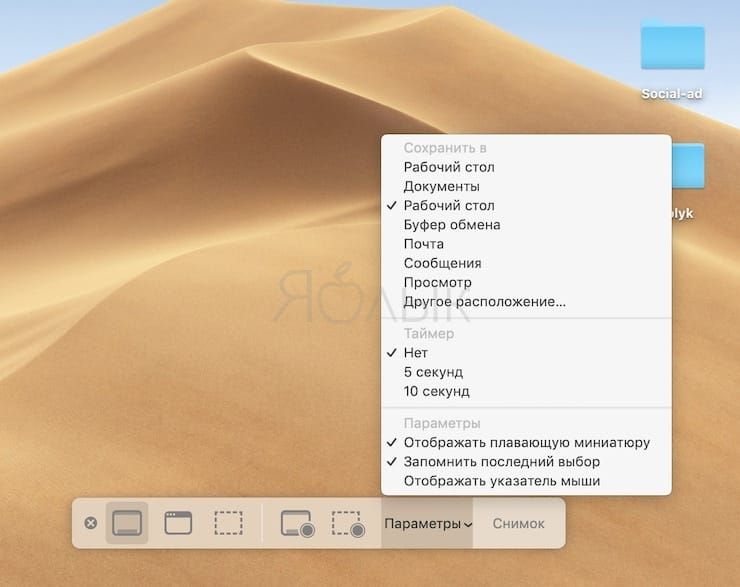 ♥ ON TOPIC: How to Switch Language on Macbook, iMac, Mac Pro or Mac Mini Keyboard – 3 Ways.

1. Open the program Screenshot in any of the ways indicated above. 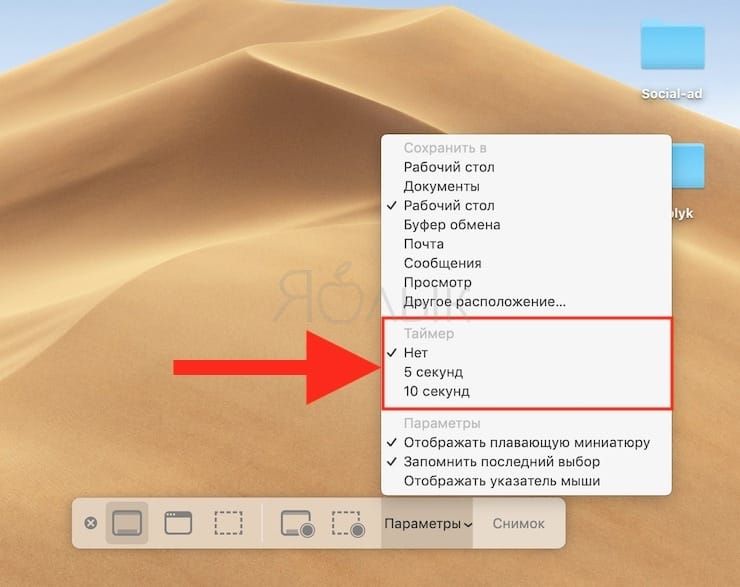 ♥ ON TOPIC: Live (dynamic) wallpapers on Mac: how to enable.

1. Open the program Screenshot in any of the ways indicated above. 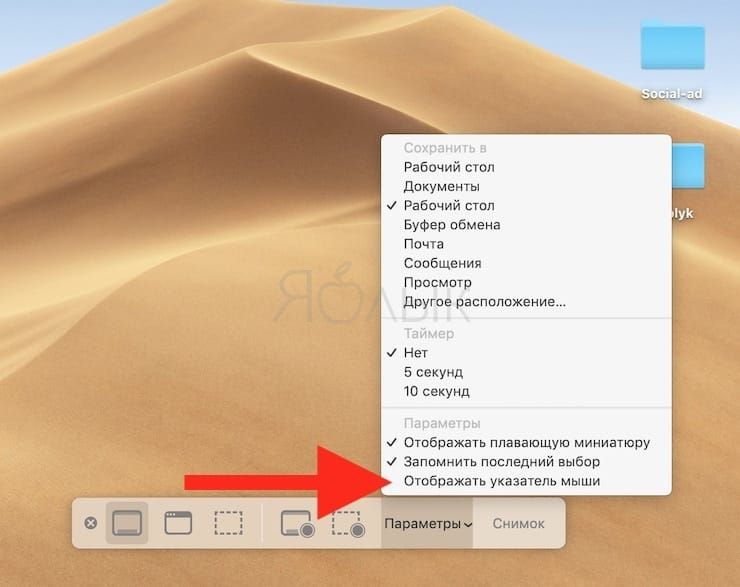 ♥ ON TOPIC: Hot corners on macOS: what they are, how to set up and use.

How to edit a screenshot on macOS Mojave and newer

1. After taking a screenshot, its thumbnail will appear in the lower right corner. Click on it to start the mode “Markup”… 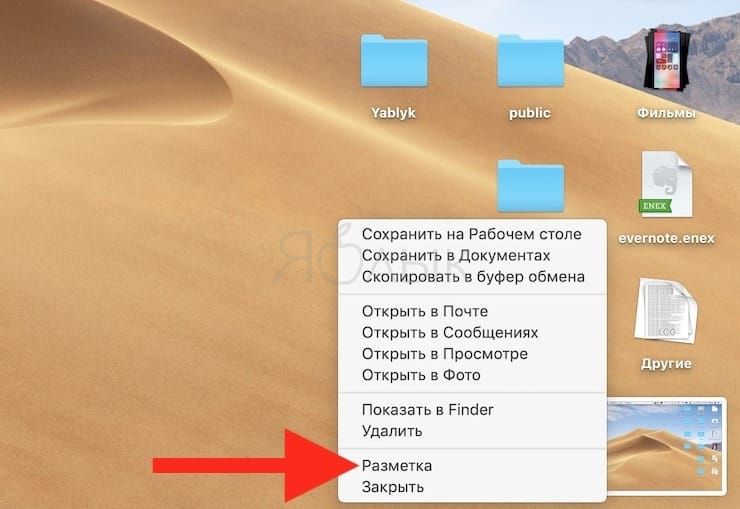 3. Use the toolbar “Markup” to draw, write, select, add shapes, insert text, label, rotate, or select text styles using the toolbar at the top of the Quick View. 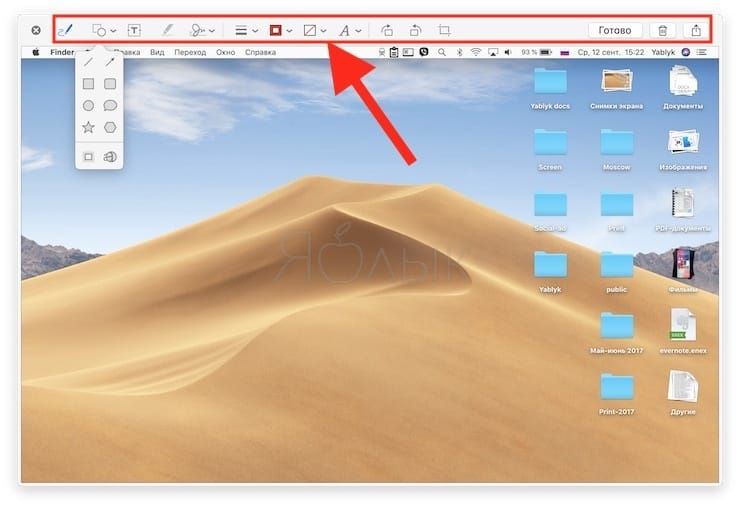 ♥ ON TOPIC: How to properly set up Do Not Disturb on iPhone, iPad and Mac.

How to take a screenshot using keyboard shortcuts

Appendix Screenshot – this is certainly great, but having memorized a couple of hot keys, you can easily take several types of screenshots literally instantly. It remains to imagine that you are a pianist and, at first, write combinations on a sticker and stick them on the computer display: 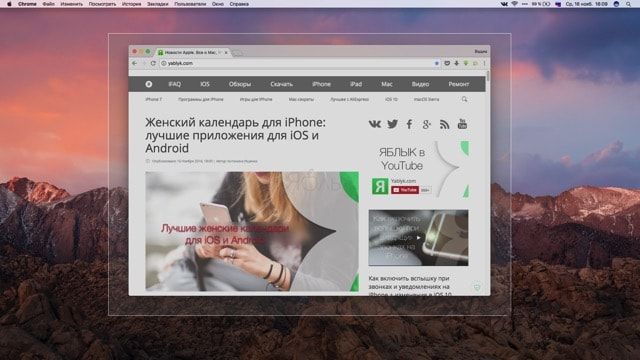 It is noteworthy that you can insert screenshots not only on the Mac on which they were created, but also on devices tied to the same iCloud thanks to Universal clipboard (Universal Clipboard).

We wrote more about the operation of this function and the activation method in this article.

All screenshots are saved on the desktop by default in the format “Screenshot of YYYY-MM-DD in HH.MM.SS»(Screenshot – date – time). Both the path and the name can be changed using Terminal commands.

We wrote about how to change the path along which screenshots will be created in this article.

To change the default name, enter the following command in Terminal and press Return (Enter):

You can return the name to its original state with the command:

To remove the shadow cast by the window run the following command:

Return to the initial state is carried out by the command:

♥ ON TOPIC: How to find out where a file was downloaded from on Mac…

After starting the application Screenshot (the program can be found along the way Finder → Applications → Screenshot, through search Spotlight or Launchpad) in the menu bar, go to the snapshot tab and select one of the available screenshots options:

♥ ON TOPIC: Stacks in macOS, or how to organize files on your desktop into neat groups.

The standard utility for taking screenshots and shortcuts are only good if you want to capture information within the display frames. It is not uncommon to take a screenshot of a web page with content going far down. In this case, we recommend using the free FireShot extension for Google Chrome (it’s time to get used to the fact that the most delicious extensions are not available in Safari). 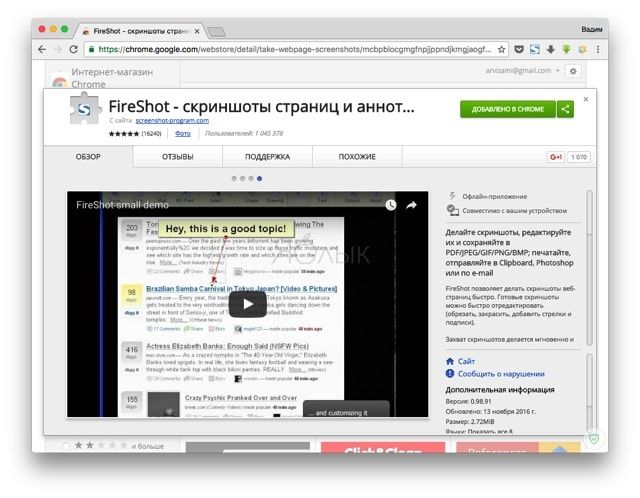 After installation, click on the extension icon and select one of the available screenshot options: 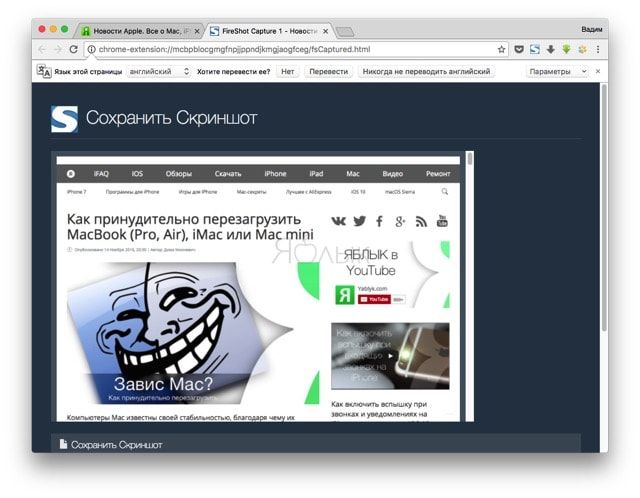 In the end, it remains to edit the points of interest directly in the web form and save the result in a convenient format.

♥ ON TOPIC: How to copy the full path to a file or folder on macOS.

If you are the proud owner of a MacBook with a Touch Bar, then sooner or later a question related to screenshots will probably arise. And yes, you can take a screenshot of this small display, and even in a systemic way (without using third-party software. Apple, as always, took care of the nuances).

Use the keyboard shortcut Command (⌘) + Shift (⇧) + 6 to take a screenshot of everything on the Touch Bar. The file will immediately be saved in the default location (usually the desktop).

But using the key combination Command (⌘) + Shift (⇧) + Control (⌃) + 6 – The Touch Bar screenshot is copied to the clipboard, but the file itself is not created on disk (that is, you can insert an image (Command (⌘) + V)).