Starting with iOS 13 and iPadOS 13 on Apple’s iPhone and iPad operating systems, the stock Photos app has received a powerful set of video editing tools. In iOS 12 and earlier, most of the editing tools are for images, but in iOS 13 the field of possibilities has been significantly expanded. Now even a beginner can edit a captured video quite professionally before sharing it. 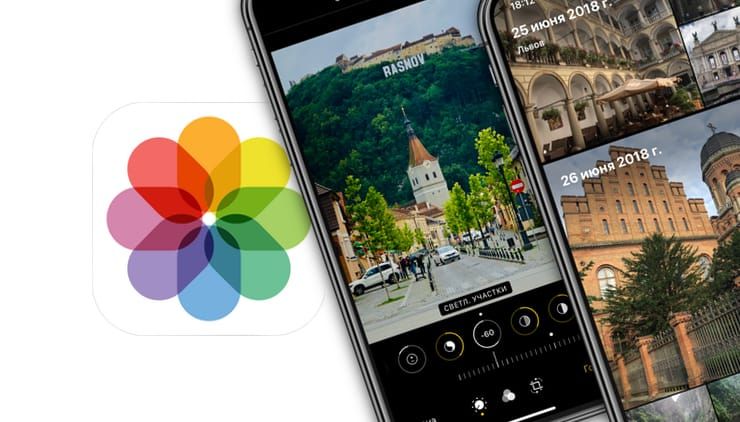 ♥ BY THEME: How to take a long screenshot on iPhone and iPad.

Effects and tools for video editing on iPhone and iPad

In previous versions of iOS, working with videos required a specialized program with a Photo extension – iMovie, Infltr, etc. Now all this is in the past – video on iPhone and iPad can be edited “out of the box”, i.e. right in the Apple photo app. The same tools are available for working with videos as for processing photos. Now you can apply system effects to video, rotate and crop video.

To start using the video editing tools in the Photos app, select the video you want to edit, then click the blue button “Edit” in the upper right corner. After making changes using any of the tools listed below, click the yellow button “Ready”to save the result. White button “Cancel” will delete all unsaved changes. 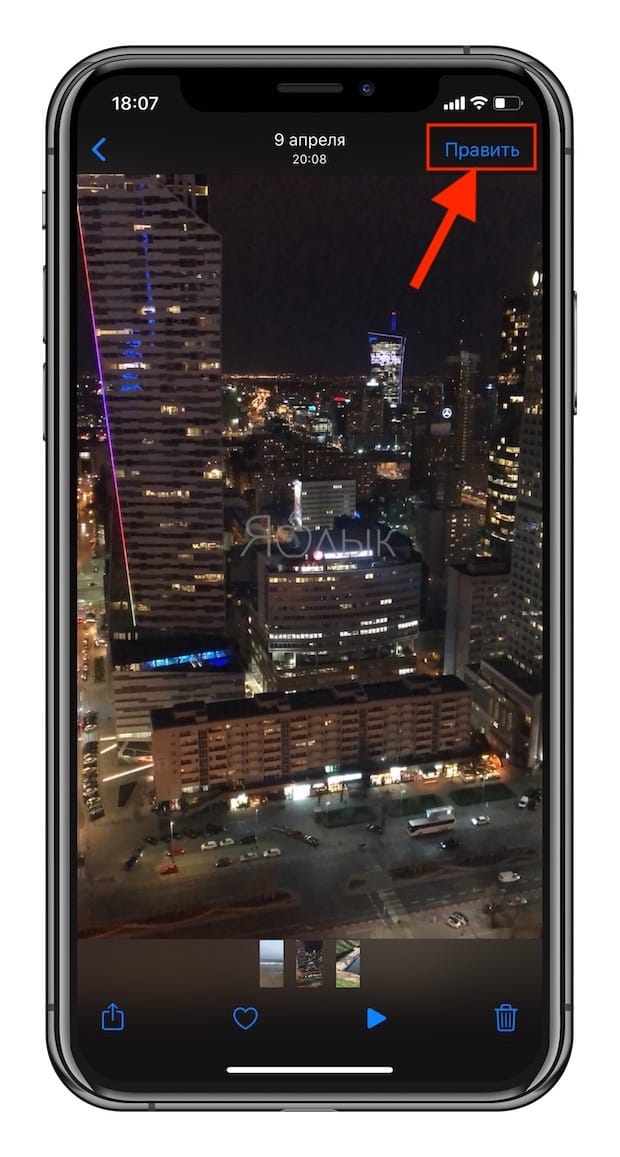 The interface is divided into six main tools:

You can trim the video from the beginning or the end. To remove the initial portion of your footage, drag the arrow from the left edge to the right along the timeline. As soon as you start moving this element, the cut out part will be marked in gray. The rest will be highlighted in yellow. The preview will follow the movement of the frame under your finger. This will help determine where to stop. Repeat the movement with the arrow on the right edge, moving it to the left. This will trim the ending of the video. 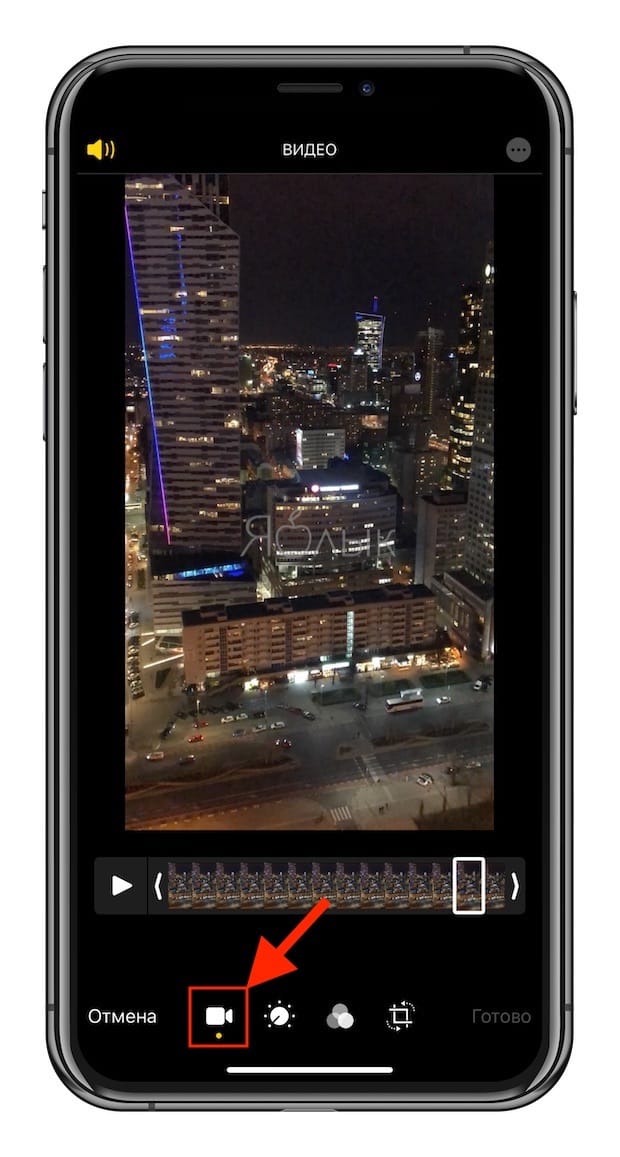 Starting with iOS 13, almost all image correction tools became available for videos as well. To access the options, in the toolbar, tap the settings icon, which is a circular clock face with dots around it. 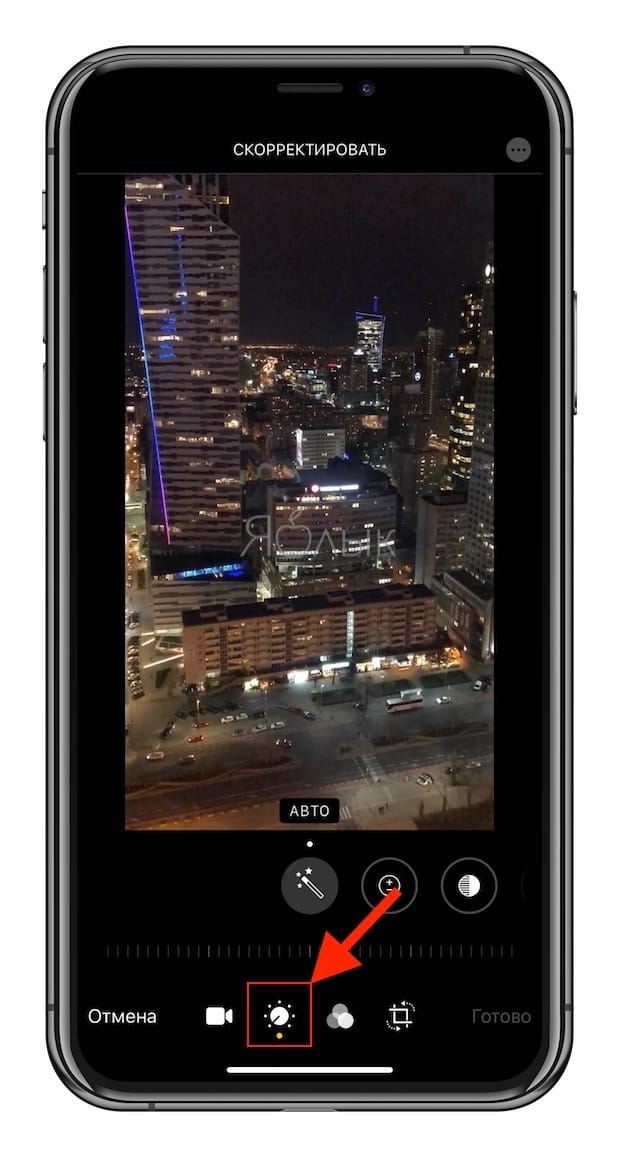 Here you can also open the video and press the familiar auto-upgrade button (the icon with the magic wand). Do this – and iOS will automatically adjust the colors, brightness, contrast, saturation and other parameters so that the output video quality becomes noticeably better. This feature tries to figure out what’s in the video and tweak the settings for the best look. But you still need to move the slider to view. Typically, this feature works great on its own. But if you want to tweak the settings a bit, there are a few additional options to the right of the enhancement tool:

For each of the options, there is a slider at the bottom to change the intensity of the effect and get the desired video settings. You can also undo the effect of each setting by moving the slider back to the small white point or by touching the adjustment effect icon. The latter will retain the last position of the slider, so that when you click on the icon, you can return to the previous settings.

Now you can embellish your video a little to your liking using one of nine filters. They are different from those found in the iMovie extension.

To go to filters, on the toolbar, click on the icon in the form of three intersecting circles. A series of thumbnails will appear for each filter, which you can cycle through by scrolling. Each thumbnail creates a quick preview of what the current frame of the video will look like after applying the effect. 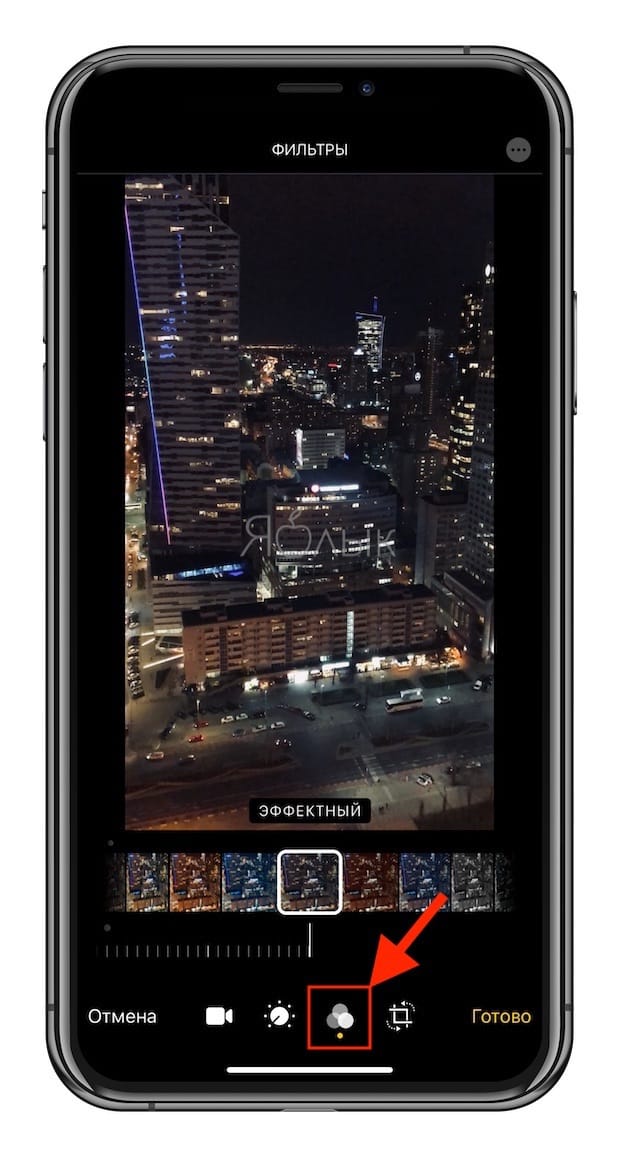 In addition, each filter has a slider at the bottom to change the intensity of the application. This allows for even better customization of effects.

Basic options include cropping and rotating, while more advanced tools include mirroring and tilting. To access these new features, click on the cropping icon, the last one in the toolbar. 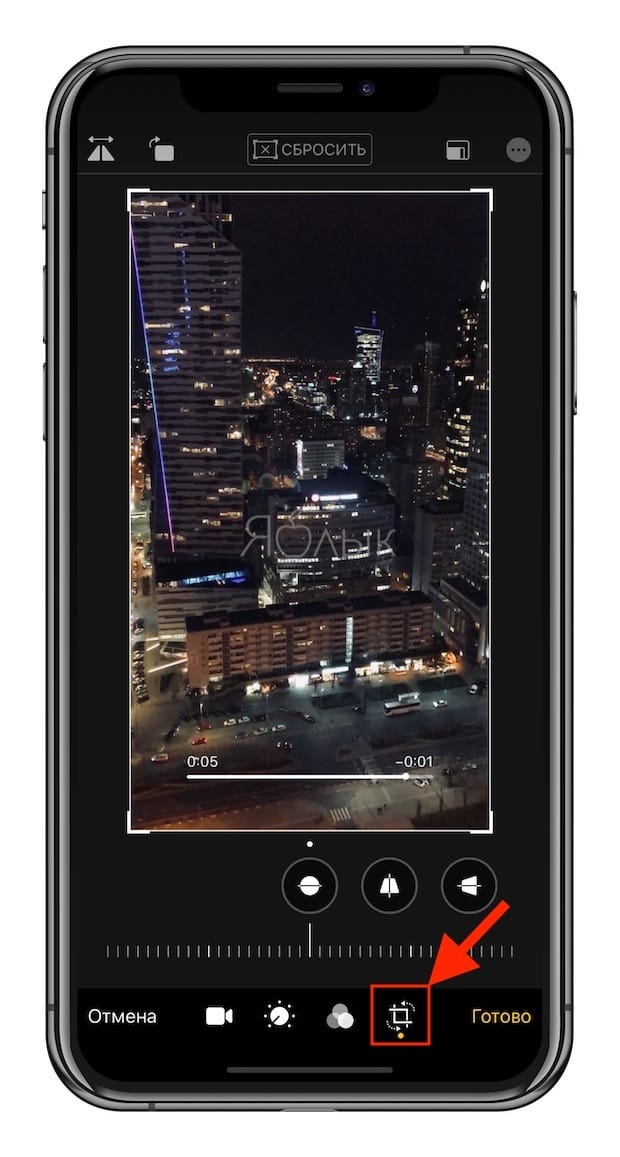 Cropping. By default, you can crop the material in any shape. Grab the video marker in the corner and move it inward, and then repeat the same operation for other corners until the video is cropped to your liking. You can also pinch the image to select a new crop area. 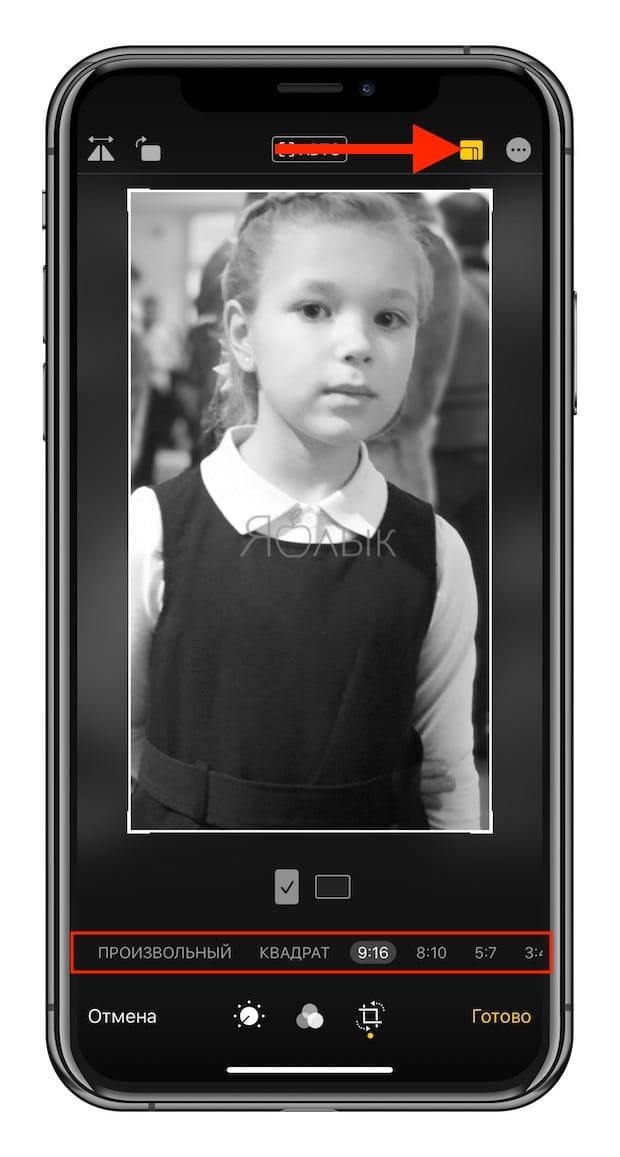 You can undo the cropping if you don’t like the changes. This is especially useful for freeform cropping. You can then click the aspect ratio icon again to return to other editing tools.

Turn.In the upper left corner, click on the square curved arrow icon to rotate the video. Each time you touch the icon, the video will rotate 90 degrees clockwise.

Mirroring… When you take a selfie on an iPhone, be it a photo or a video, then in the preview we will see ourselves as we usually see in the mirror. But when you finally take a selfie or shoot a video with the front camera, the results will be inverted, as if we were filmed from the side of that very mirror. In other words, we look like other people see us. This is useful as texts and symbols will appear in normal and not mirrored form.

But if you want the selfie to be the way it looks when previewed, then there is the ability to mirror it. To do this, simply tap the icon that looks like a split triangle with a double-headed arrow above it. 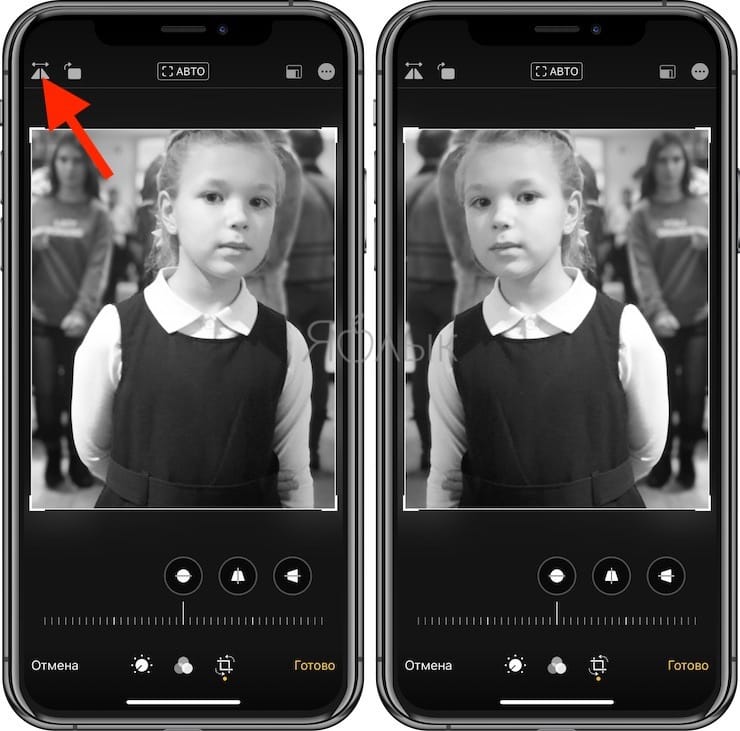 To reset the effect, move the slider back to where the small white point is, tap the effect icon (which retains your last selected angle in case you need to go back), or pressReset“At the top.

See also  How to reset Face ID settings on iPhone

An example of when this comes in handy, to some extent, can be an imitation of the opening frames of “Star Wars” with on-screen text flying away into the distance.

To reset the effect, move the slider back to where the small white point is, tap the effect icon (which retains your last selected angle in case you need to go back), or pressReset“At the top. 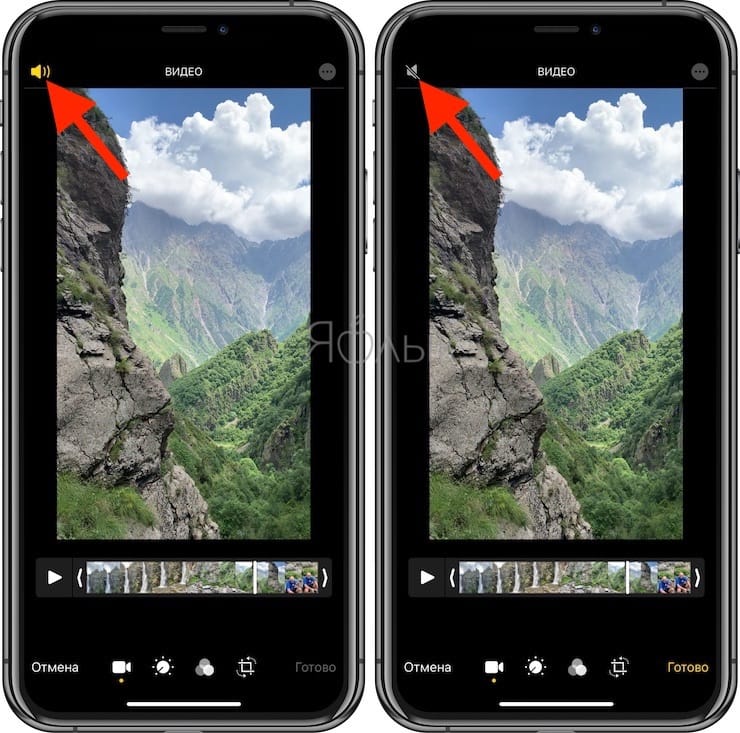 If your video has background noise, public environment sounds, or other distracting sounds, then iOS 13 will let you fix that issue. Unfortunately, there is no way to adjust the volume levels or reduce background noise, but you can completely remove the sound. Click on the yellow speaker icon in the upper left corner. When it turns gray with a crossed out line, the audio track will disappear after saving the file.

♥ BY THEME: Extensions for Safari on iPhone: what are they for, how to install them?

How to compare an edited video with the original

Regardless of what changes you made using the tools above, you can quickly compare the result with the original video by tapping it. Pressing it again will show the result of your changes.

One of the most powerful features in the application “Photo“Is the ability to easily roll back changes. If you want to return to the original view, click the “Edit“To open the editor, and then click the red”Return“, and then – “Revert to original“. Any changes you made will disappear, and your video will be the same as it was originally. 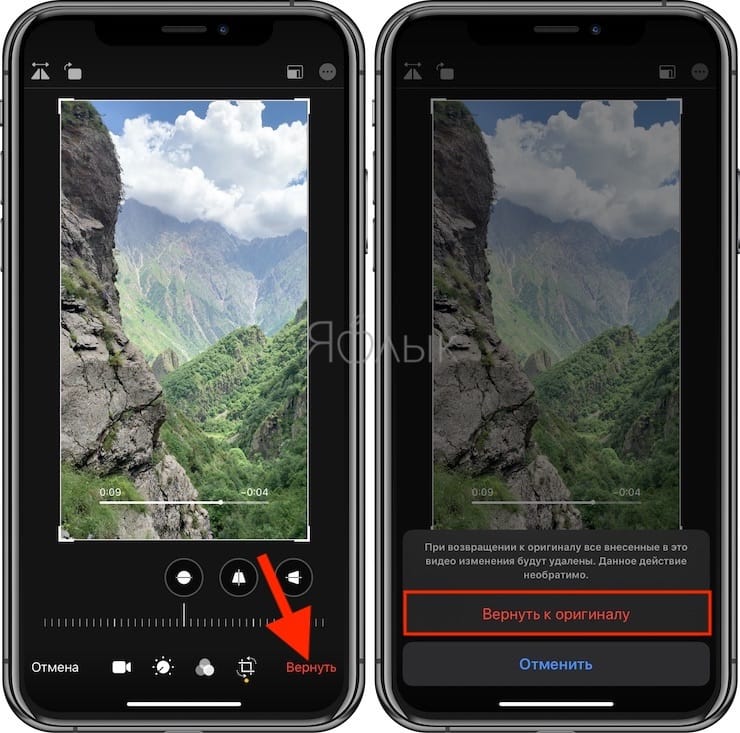 The Photos app provides every iOS user with a set of easy-to-use yet powerful video editing tools. And there is no need to look for third-party apps to do the job.