Today I will tell you how to make NFC in the iPhone really useful. Not even that: we actually turn on.

The iPhone has been around for many years with the module itself, and it is completely freely used by the Apple Pay contactless payment system.

But if you try to connect any accessory via NFC to your iPhone, you will be disappointed. More precisely, was waiting until the last moment.

By default, iOS ignores NFC tags in wireless headphones and portable speakers – the ones that are designed for quick connection. It’s a pity, because it’s very convenient: you bring the headphone case to the iPhone and it automatically connects to your “plugs”.

Android has been able to do this since time immemorial, so why are we worse? It turns out almost nothing – thanks Teams on iOS 13.

I was pleased with the positive reaction to the previous post about automating the connection of AirPods to Apple gadgets. Anyway, Commands in iOS 13 are a really powerful tool, the study of which brings tangible benefits.

So I decided not to stop and offer you something abruptly.

What will we do now so that NFC works as intended

Many good wireless headphones and portable speakers have NFC support. In 99% of cases, it allows you to skip the pairing procedure via the Bluetooth menu. Just bring the smartphone to the accessory – and you’re done.

How to understand if your accessory has NFC? The NFC logo is affixed to the accessory case near or directly above the label location. For successful pairing, it should be directed to the back of the smartphone. The range is low and a maximum of a couple of centimeters.

Apple has been blocking NFC in the iPhone for a very long time for any purpose other than Apple Pay, so iPhone owners have long been accustomed to ignore the feature in all accessories. Now we will wean.

Thanks to the instructions below and iOS 13 Teams, you can use NFC in the headphones and speakers to connect your iPhone to them in one motion without any Settings and the menu in general.

Instruction Turn on the connection to headphones and speakers via NFC

▸ iPhone with iOS 13. iPad will not work, iPod touch also, they simply do not have NFC

▸ wireless headphones or speakers with an NFC tag. If the accessory does not have an NFC tag, it does not matter. Even your bank card can serve it, as I wrote here

▸ one minute to set up

Before setting up, make sure that the accessory is connected to your gadget right now, this is important. Go

1. Open Teams and go to the tab Automation. This application is preinstalled since iOS 12. If you accidentally delete it, just download it again from the App Store.

2. Click on + in the upper right corner or immediately select Create automation for yourself. 3. In the list that opens, scroll down to the NFC item. Tap on Scan opposite NFC tag. 4. Bring your headphones or speakers with the NFC tag to the top of the back of the iPhone – where it has a camera. Nothing happens? Do not make sudden movements and hold the mark under the iPhone for at least a second before moving it. primary recognition of a label in iOS 13 for some reason takes much longer than it will be required after configuration.

You can also use any NFC tag in general, not just the one built into your headphones or speakers. In addition to bank cards, the label can even serve as a penetration from the office or an NFC sticker with AliExpress. Thus, the quick connect function can be added to any Bluetooth speakers. The main thing is not to lose the label itself. As soon as the iPhone finds the accessory label, it will offer to name it. Write and continue.

5. Now we add a new action that will be performed when the iPhone finds this NFC tag. Choose Scripts, scroll down and click Set playback location. 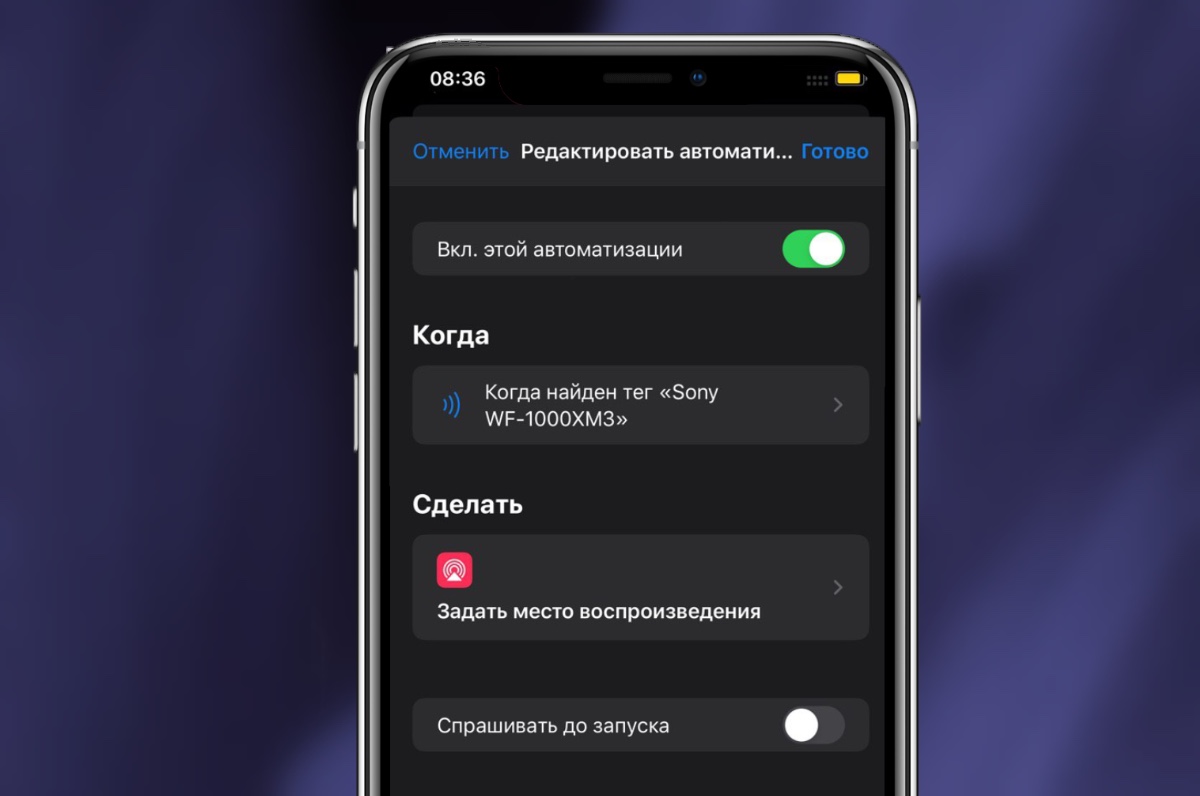 6. In the list that opens, select the headphones or speakers that will connect to the iPhone when you bring it to the NFC tag. In my case, these are Sony WF-1000XM3 headphones.

If there is nothing in the list, you did not connect the accessory to the iPhone in advance. Do this and return to the current paragraph of the instruction.

7. We are almost done. It remains only to disable the parameter Ask before launch and confirm your choice. Now, every time you bring the iPhone to the included headphones or speakers, they must be connected to each other.

Unlike Android, an iPhone cannot be forced to connect to unknown (previously non-paired) devices using the Automation we just created. We look forward to iOS 14 and further concessions for NFC from Apple.