Some tourists are looking for buildings with a centuries-old history in the secluded corners of cities, while others admire the modern glass skyscrapers rushing upward. It seems that these two universes are simply unable to intersect. In the history of architecture, there are many cases of how a building gradually changes its appearance, and at the same time its functionality. For example, with a decline in interest in religion in some countries, temples and churches are being converted into cultural churches and music schools. The old fire station can turn into an office center. We will tell you about some interesting projects in which metamorphosis looks very contrasting. 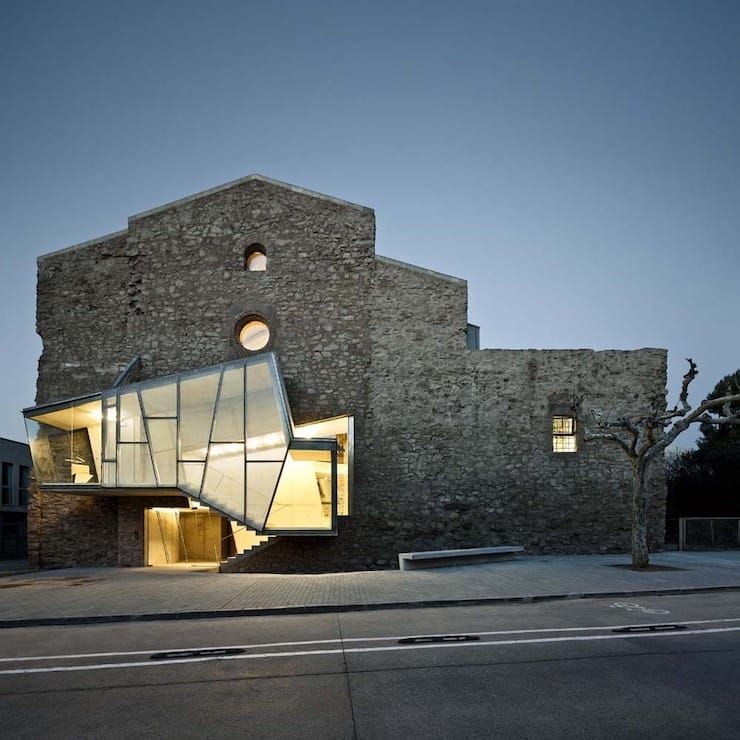 Franciscan monks founded here in the 18th century a complex with the Church of St. Francis. Until 1835 the monastery functioned. But by 2000, in fact, only ruins remained from it. Only the building of the church, and part of the perimeter wall, reminded of the complex. The roof was badly leaky, and there could be no talk of choir performances. And some elements of the nave and chapels have collapsed altogether. 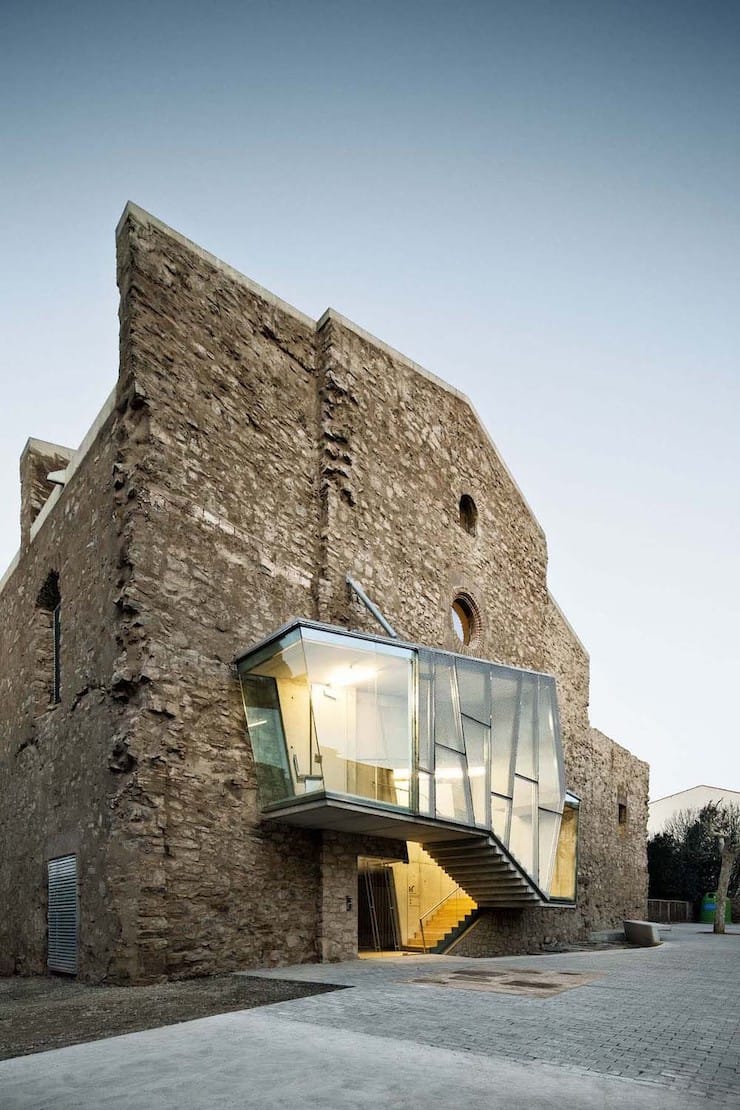 Reconstruction began in 2003. Architect David Klozes spent almost 8 years on the implementation of a bold project. He left the historic area intact, but added smooth concrete surfaces with large windows to the structure. This allowed the room to be filled with natural light. In the most secluded corners of the new cultural center, Closes placed artificial lighting. So he made sure that there were no dark places in space. The auditorium was located in the nave, and the historical archive was raised under the roof. Inside, an entire system of stairs and ramps has been created that allow visitors to circle the interior of the building to explore the surviving parts from the best possible angles. 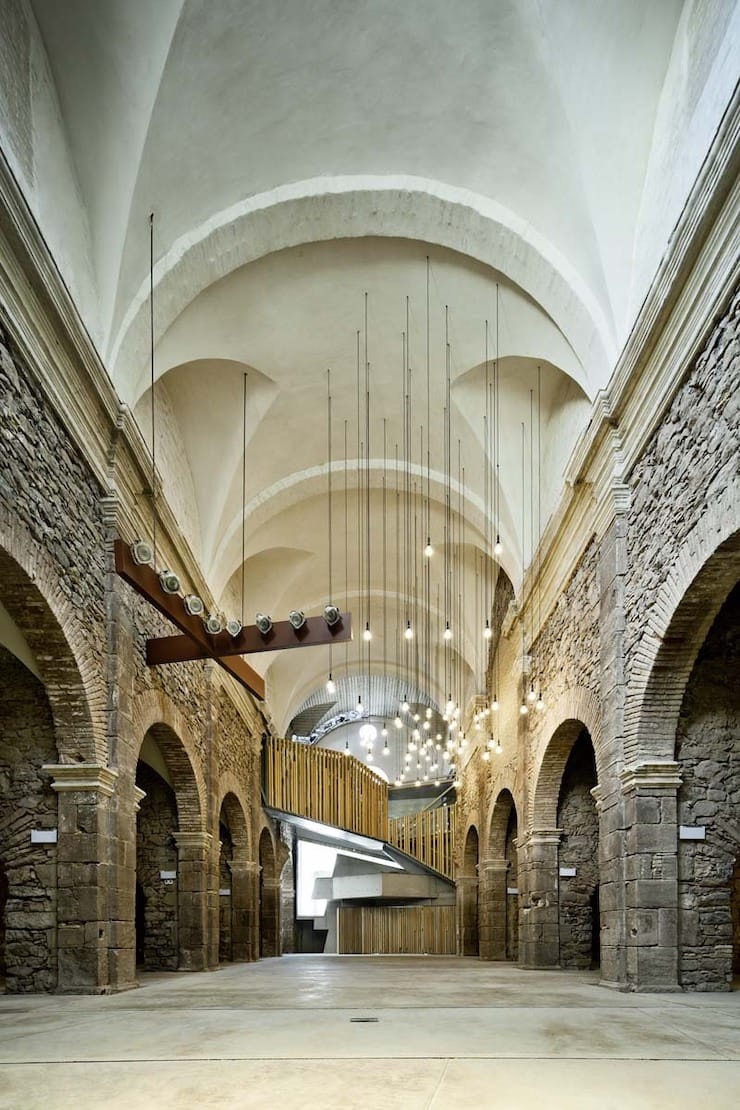 The architect deliberately separated the historical and innovative elements from each other as much as possible. At the same time, the church retained its face: it was decided not to cover its old scars with plaster. They had to resort to special building techniques, which made it possible to strengthen the structure, but at the same time preserve the signs of its destruction. 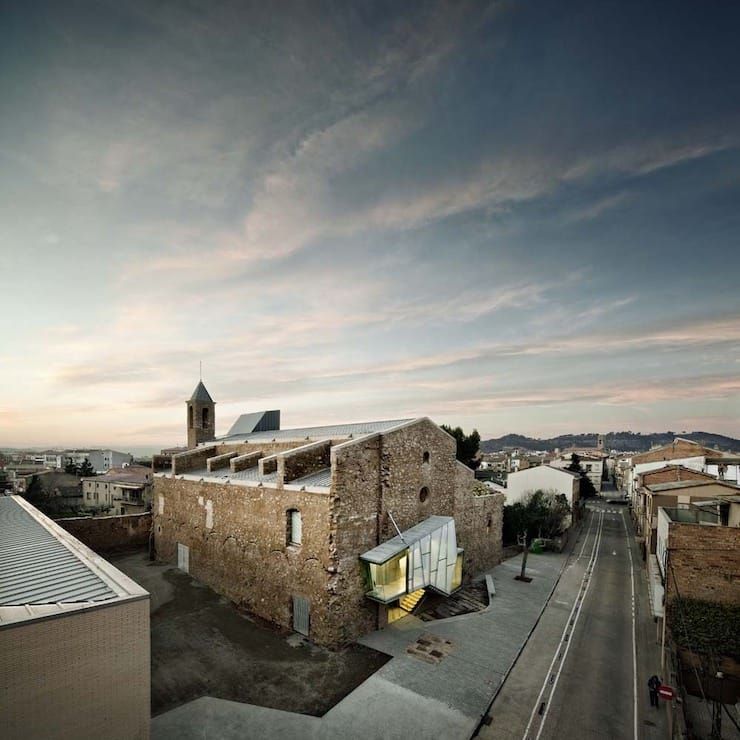 The carpentry workshop turned into an office center and a residential complex, Estonia, Tallinn 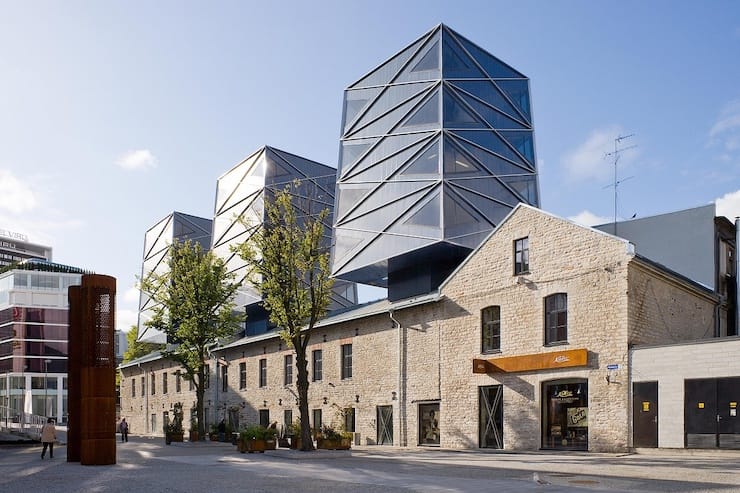 The Rotermann Quarter in terms of the concentration of historic buildings is a competitor to the “old” Tallinn. At the end of the 19th century, a carpentry workshop in a trade and factory area was abandoned. So the building remained forgotten until the end of the 1970s, when Andrei Tarkovsky drew attention to the colorful building. Some scenes of his film “Stalker” were filmed in the workshop.

See also  Survivor's mistake: what does this term mean, examples 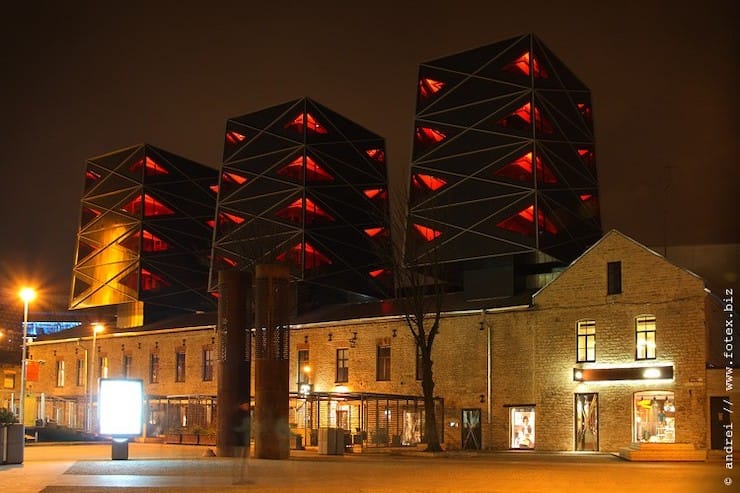 The building stood abandoned until the early 2000s, when the city authorities thoroughly took over it, as well as for the entire quarter. The former factory district has become a fashionable place known throughout the Baltics. There are creative studios, flagship stores of famous brands, and the apartments are breaking records in Estonian real estate prices. The carpentry building has become a landmark for the region. Above a low abandoned building, three vertical towers shot up at once. The architects wanted to use such an idea and form to remind of the industrial architecture of the beginning of the last century. It seems that the towers rest on the roof of an old building, but in fact, reinforced concrete piles are located at their base. The roof of the old workshop simply could not bear such a load. The project was so successful and remarkable that its authors were nominated for the Mies van der Rohe Prize for Contemporary Architecture in 2009 by the European Union. 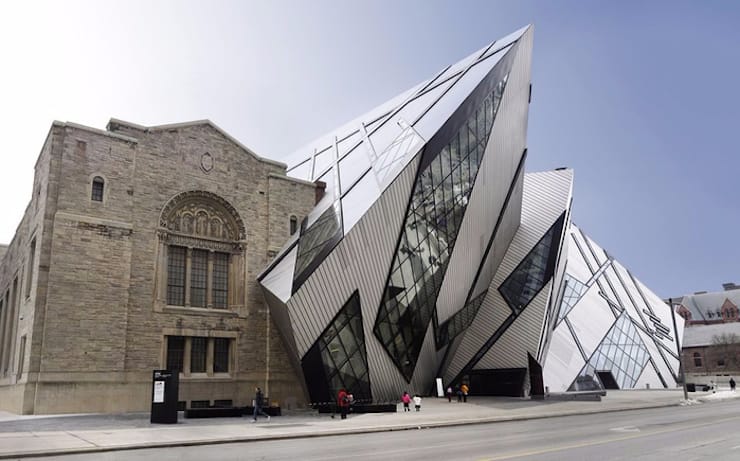 It is no secret that museums are gradually losing their popularity. Faced with this back in the 1990s, the Royal Natural History Museum. Interest in at least the building was piqued by the new building, built in the form of a crystal in 2007. This construction cost $ 270 million, but the project was successful. It vividly combines the images of historical and modern architecture. The American architect Daniel Libeskind was inspired to create this project in the form of a new building of the museum by the crystals of minerals seen in the local exposition.

I must say that not everyone liked the unexpected extension. But critics were drowned out by positive reviews of the project. The “crystal” built into the old building made not only the appearance of the museum itself dynamic, but also refreshed the entire street. The shape of the building can be roughly described as five intersecting prisms. Thanks to this, the interior spaces were devoid of right angles, which leaves an indelible impression. It is no coincidence that the central staircase of the museum is called the “Staircase of Miracles”. It connects all five floors of the building and in itself acts as a kind of gallery with thousands of unique exhibits from various collections.

Converting a paper mill to a distillery, UK, Hampshire 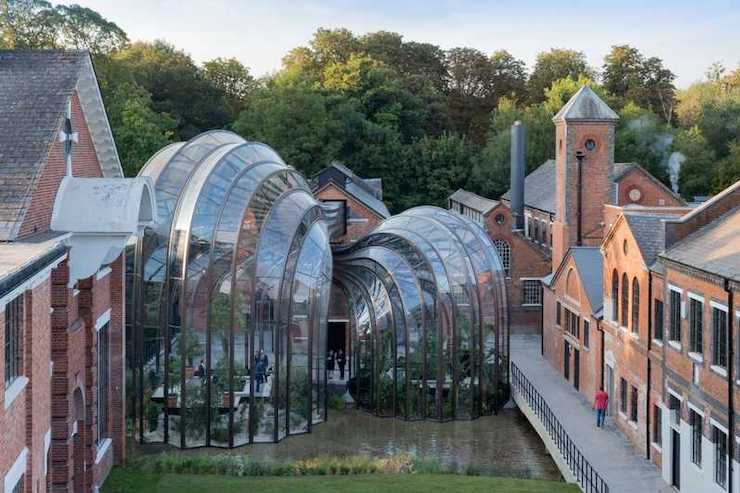 From the beginning of the 18th century to the middle of the 20th century, the Bank of England printed its banknotes at the paper mill located on the banks of the Test River. Over time, the production could no longer fulfill its functions, and the premises had a new owner. It was the Bombay Sapphire Laverstock Mill distillery. The owners were attentive to the legacy they inherited. In collaboration with the state agency for the protection of monuments, English Heritage, reconstruction of the architecture of the site was carried out. Small outbuildings were removed from its territory, the nearest river branches were widened and deepened three times. Thus, it was possible to create a picturesque landscape around the once industrial facility.

See also  How to give an iPhone? Pack in a chair! An example of original packaging (photo) 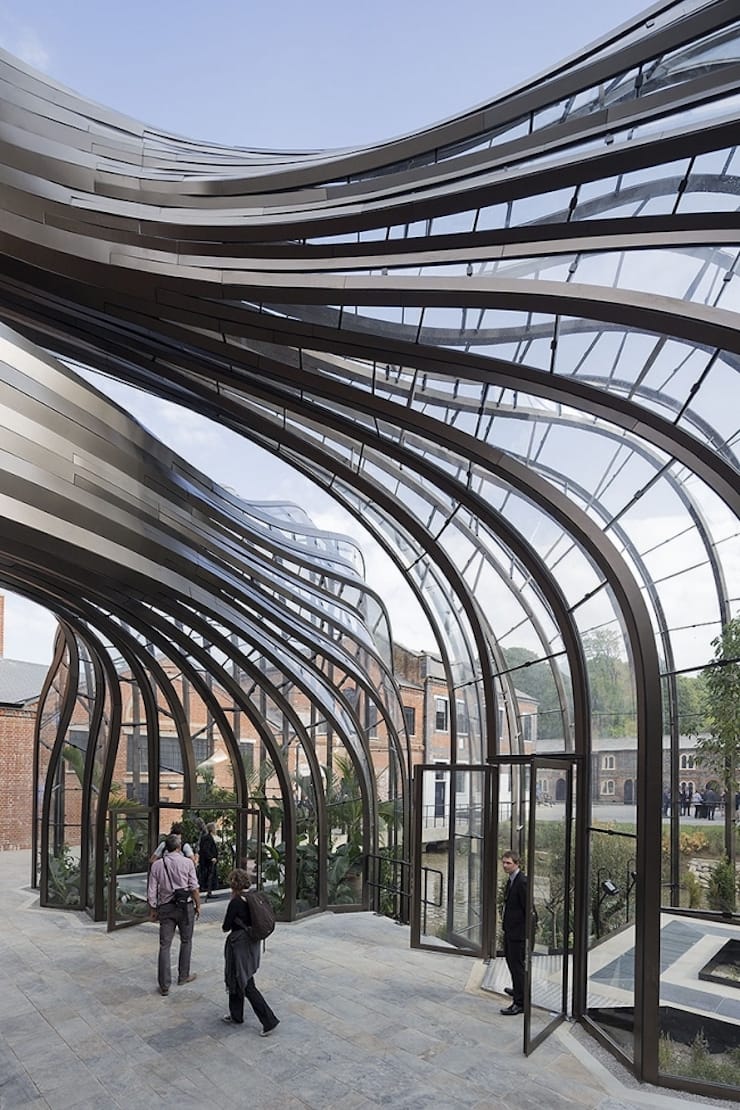 British architect Thomas Heatherwick took into account the Victorian fashion for greenhouses. This prompted him to create a unique cooling system for the production hall with distillation tanks. The structure based on metal beams and glass consists of 10 thousand elements. Thanks to it, hot air from the production room is discharged into the greenhouse outside the building, and then through the historic tower to the outside. Warm air and a constant humidity level in the pavilions make it possible to grow tropical and Mediterranean plants there. They are great for flavoring the gin produced in the factory. 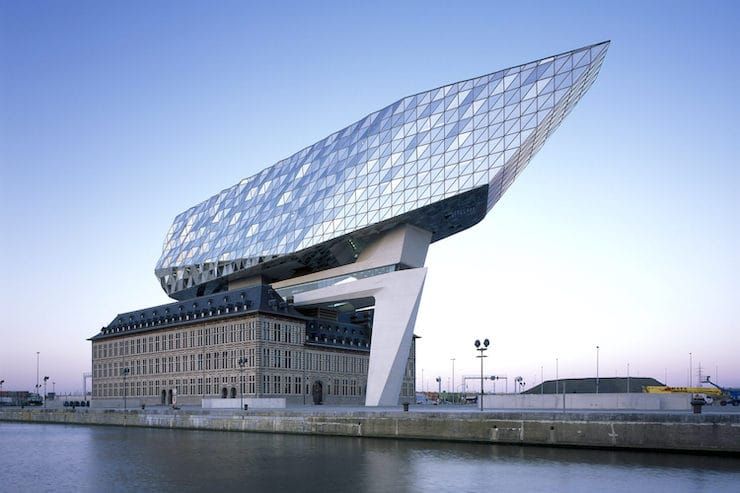 Zaha Hadid’s architectural bureau took an unconventional approach to the task of forming an administration building for one of the largest ports in Europe. The basis was an old fire station, which received a diamond-shaped superstructure. This decision was not accidental – Antwerp has long been considered the world center for the trade in diamonds and their cutting. The Belgian port has even been nicknamed the “diamond city”. And in memory of the architect and designer who died in 2016, the square in front of the administration was named in her honor. 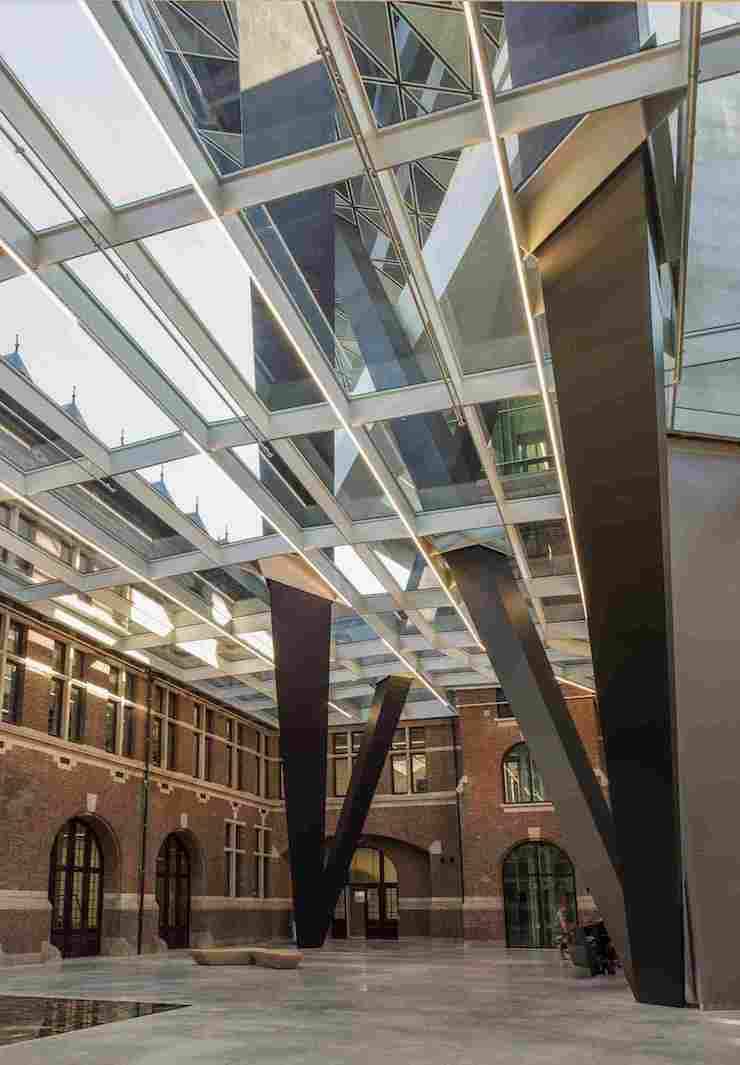 And in the building itself there was a place for a library, conference rooms and restaurants. An observation deck was installed on its roof. The workspace is occupied by open-plan offices that allow employees to change their place of work depending on the tasks: telephone conversations, working at a computer, business meetings. Energy saving has also been considered in this project. A special geothermal system heats and cools the building. The interior lighting level is adjusted depending on the time of day. And even in toilets, there are motion sensors on faucets and urinals that run without water.

See also  How to put stress in the plural of some words: 30 common examples 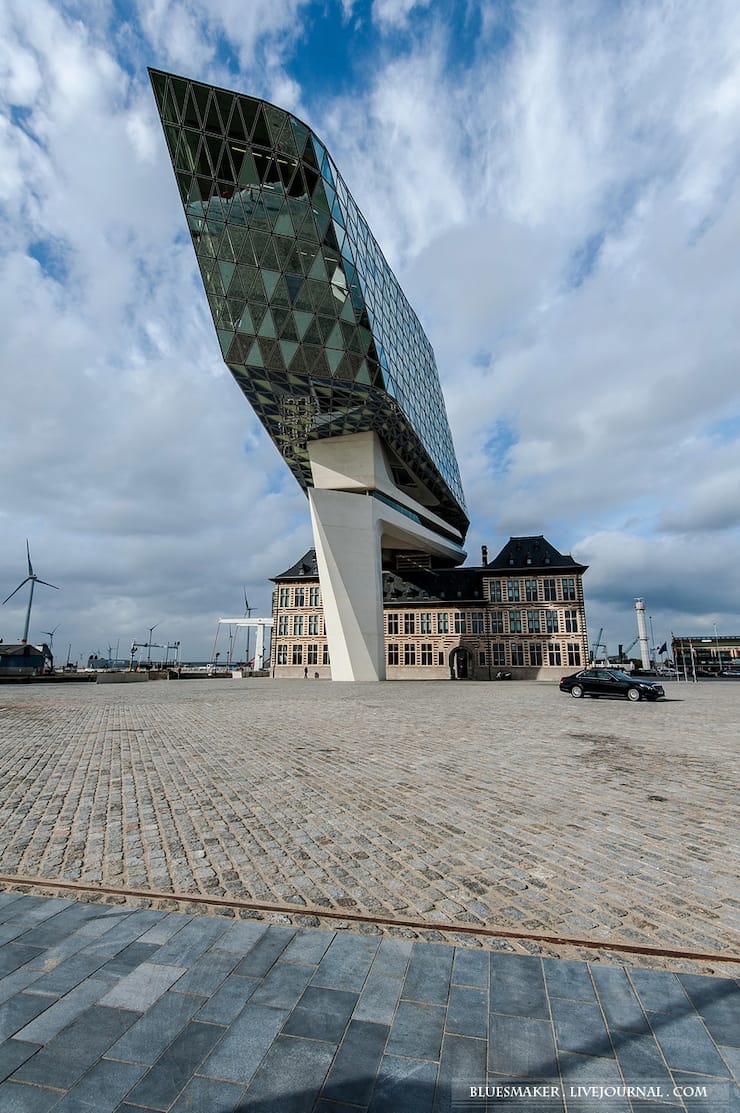 The monastery opened its doors to a music school, France, Louvier 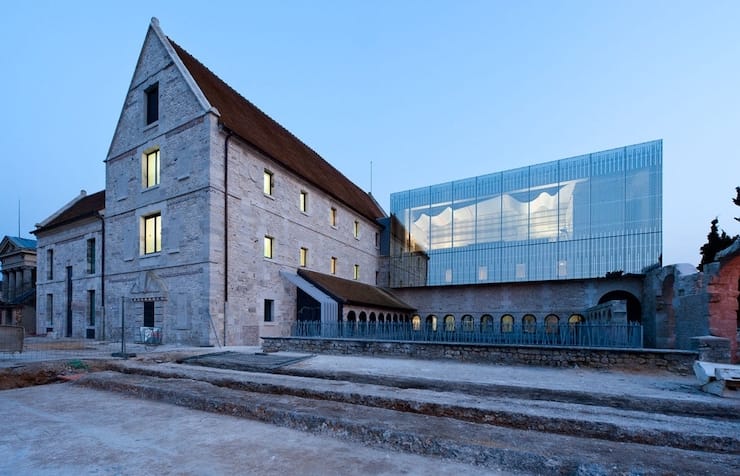 Since its construction in the 17th century, this Franciscan monastery has changed its purpose several times. During the years of the French Revolution, a prison was located here, and later the walls ensured the safety of the grain stored inside the warehouse. TO XIX century the building was partially destroyed. It was already given a second life by our contemporaries – in 1990, the remaining buildings began to be used for a music school. 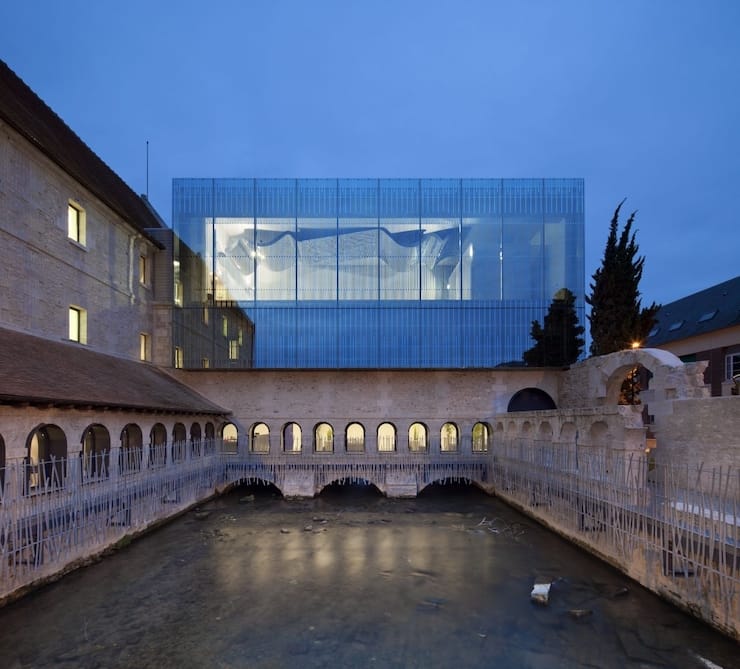 And after 10 years, the inner area was also expanded due to the construction of new buildings. One of them appeared right on the ruins of the south wing. Now, at the junction, the border between the new and the old building is clearly visible. The architect Bruno Decari, who heads the Paris office of Opus 5, suggested that one of the walls of the rectangular building be made of glass altogether. This solution allows the surrounding landscape to be reflected in the glass during the day, and to view the interior of the concert hall in the evening.

Combining a residential building and a mill, Italy, Chieti 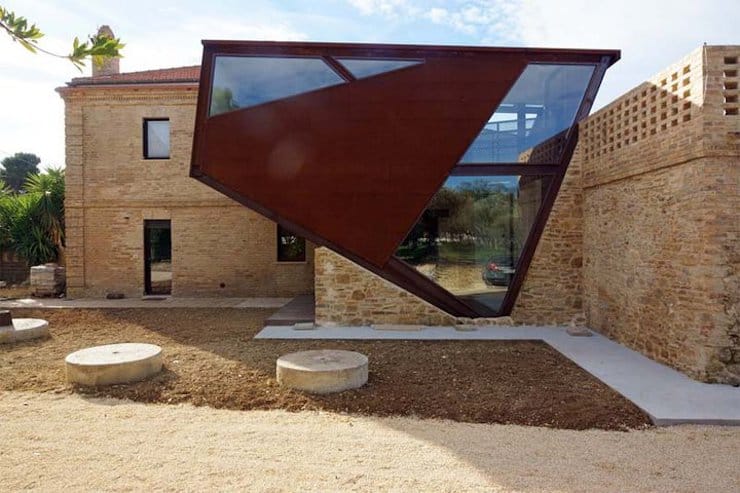 Villas are not always comfortable for living. This small building on the shores of the Adriatic Sea dates back to the 19th century, but poor renovation in the mid-1980s damaged the style. Modern developments clearly rendered residential buildings and olive oil mills irrelevant.

The Italian architect Rocco Valentini got down to business. He cleared the territory of obviously unnecessary objects and connected together two previously separate historical buildings. Between them is a pavilion made of glass and Corten steel. The architect managed to preserve the historical masonry of the outer walls and the entrance arch. The new space has a hall with a staircase and a dining room with a glass wall, through which a view of the courtyard opens. A mahogany bridge connects the two buildings. Valentini was inspired by agricultural implements of the 19th century for this unusual shape of the extension. Now the exterior of the new building perfectly matches the old tools displayed as art objects in the courtyard.