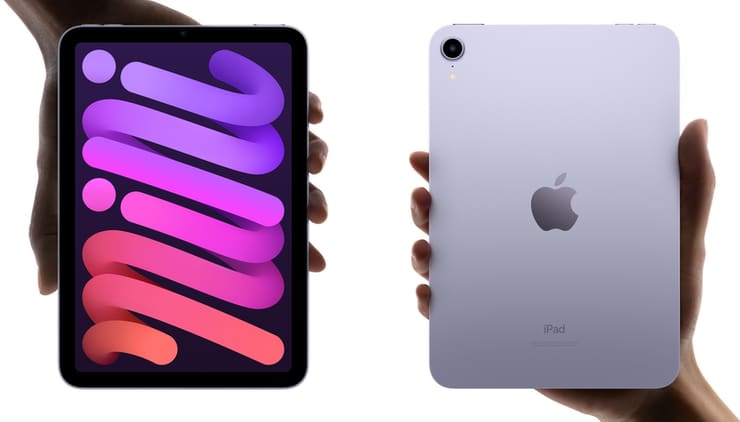 The iPad mini line has its own interesting life. Some genuinely wonder why such a small tablet is needed at all, because the size of smartphones is constantly growing. Others enjoy the compact and powerful solution. It is no coincidence that Tim Cook emphasized the popularity of iPad mini among pilots and doctors at the presentation. Minikis are not updated as often as the main line of iPad tablets, for example, the fifth generation, was introduced back in March 2019. Since then, the design of current Apple devices has changed, so the iPad mini also required a rethink.

And in the fall of 2021, the iPad mini 6 was presented. With the new device, Apple managed to surprise and delight fans of this product. Hardly anyone can blame the manufacturer for the lack of changes. In addition to the natural improvement of the hardware, the iPad mini’s appearance has also changed. We will tell you how the sixth generation of this tablet turned out in this review.

Confusing iPad mini 6 with its predecessors will not work thanks to the new design of the device. I must say, such a step suggested itself, and fans of the model will certainly accept it favorably. iPad mini 6 has lost the classic Home button, and the bezels around the screen have narrowed and become the same. All of this is reminiscent of the iPad Air in its current version. Rounded corners give the tablet a touch of elegance. But now the iPad mini 6 has sharp edges, they have lost their smooth curves. The body is made of recycled aluminum. 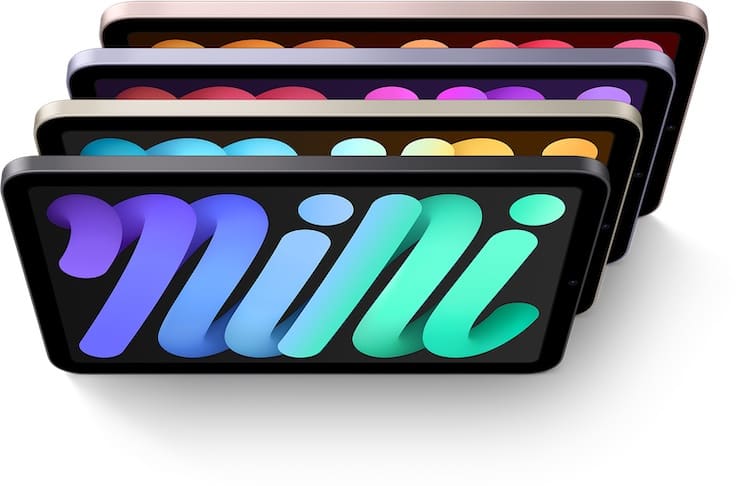 On the top there is a power button, which has a built-in Touch ID sensor. On the opposite side are the volume down / up buttons. They’ve moved here to help provide a better grip on the device. 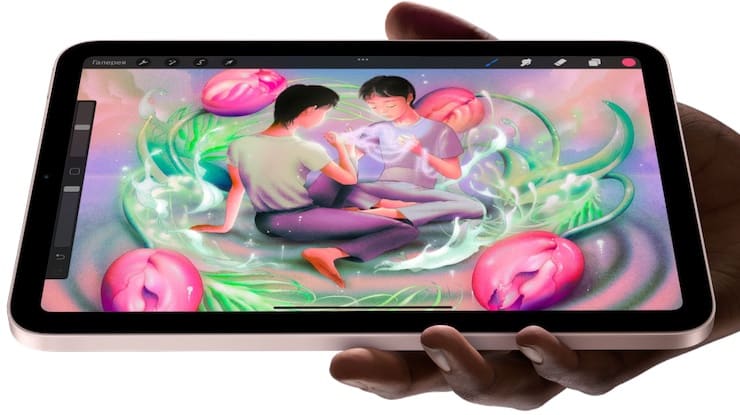 The speaker is located in the middle of the edge. The second one is the same on the opposite, lower edge. This allows you to generate stereo sound in the horizontal orientation of the device.

At the bottom there is a USB-C connector (goodbye, Lightning). On the right side of the tablet, you’ll find a SIM card slot for LTE models and a magnetic surface for charging Apple Pencil. The back side has retained its laconic appearance: a camera with a flash in the upper left corner and a corporate logo in the form of an apple in the middle.

Apple offers iPad mini in four colors. In addition to the more or less classic “gray space” (gray) and “shining star” (silver), it is also bright and interesting purple and pink. 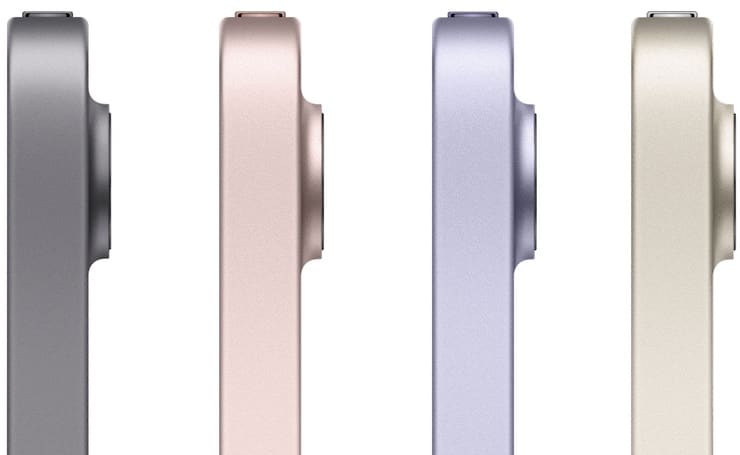 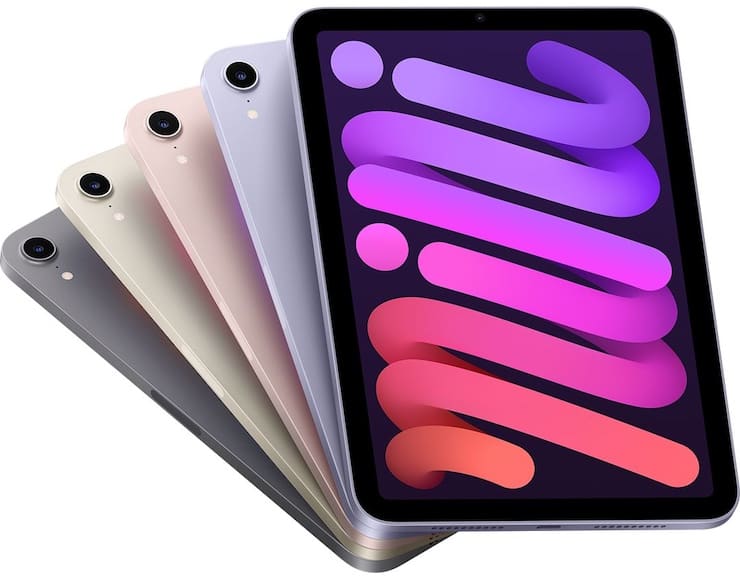 iPad mini 6 has retained its compact shape, which is the key to the popularity of this line – 195.4 x 134.8 x 6.3 mm. The device weighs only 293 grams (model with LTE – 297 grams). As a result, the tablet has become even slightly smaller than its predecessor, although the screen has grown in size. 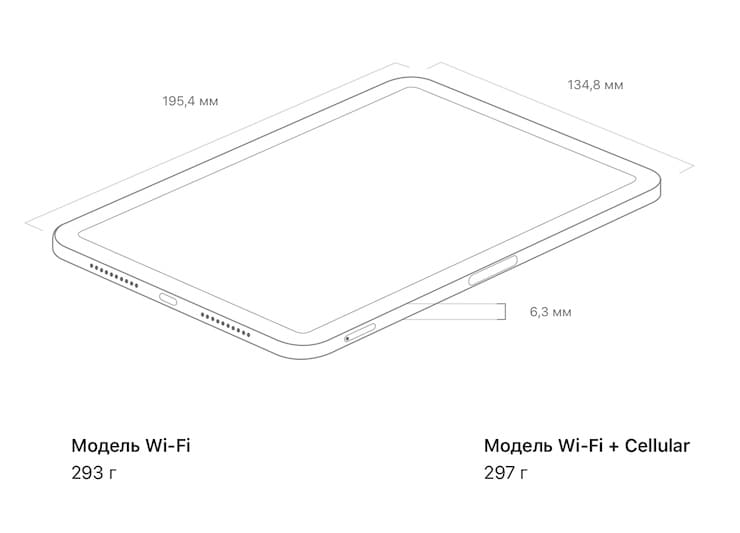 ♥ BY THEME: How to recognize text from photos on iPhone and iPad without installing third-party applications. 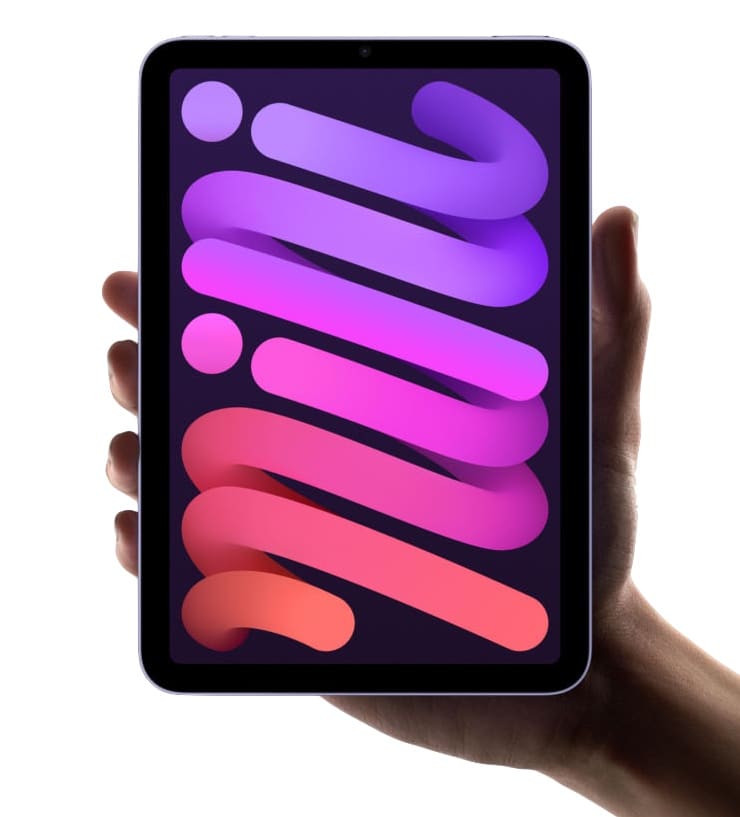 Initially, the diagonal of a regular iPad was 9.7 inches, while its younger brother mini was 7.9 inches. But the magic of numbers has already dissipated. There are several options for the size of the older models, it is time for the iPad mini to move away from the usual form. The display has received a new type – now it is Liquid Retina, its diagonal size is 8.3 inches. The resolution has also changed – now it is 2266 × 1488 pixels. As you can see, the transition to thin frames increased the height of the screen, but made it a little narrower. Based on this, the aspect ratio has also changed, now it is closer to 3: 2, while it was 4: 3.

Image density remains the same at 326 dots per square inch. Like its predecessor, there is support for a wide P3 color gamut and True Tone for adjusting the white balance depending on the lighting. And the maximum screen brightness remains the same – 500 cd / m22… 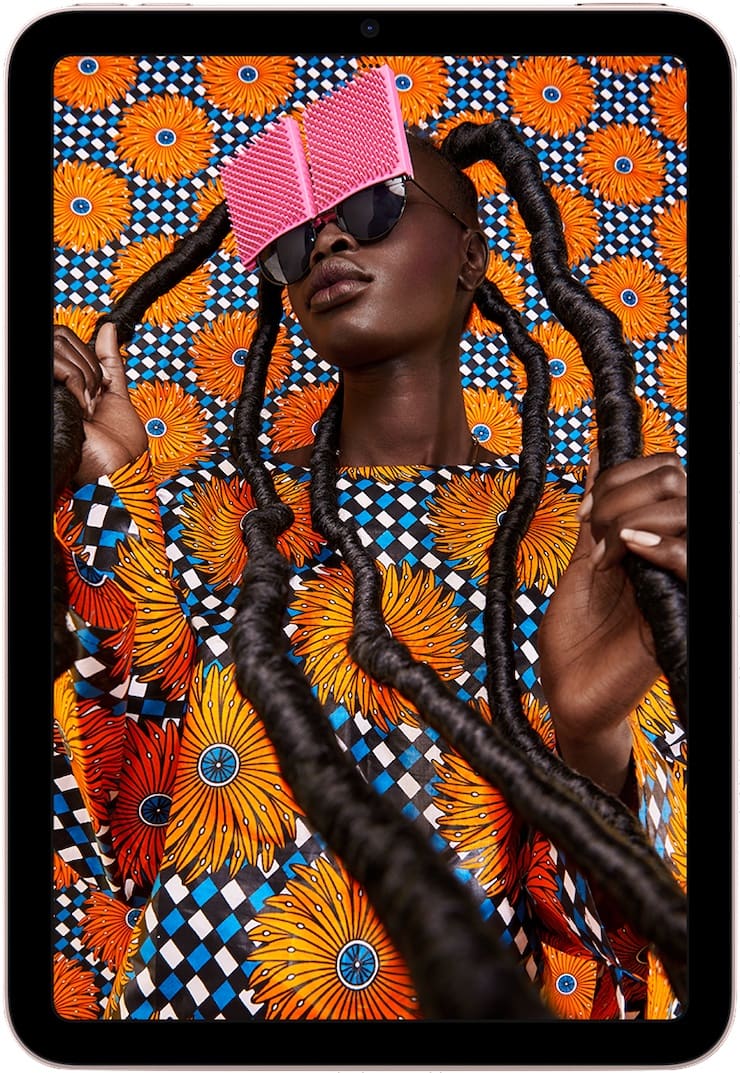 In general, the display has not improved in principle. It has LED backlighting and is made using IPS technology. The fully laminated display has an anti-glare and oleophobic coating that resists fingerprints. It is worth noting that support for the second generation Apple Pencil has appeared. 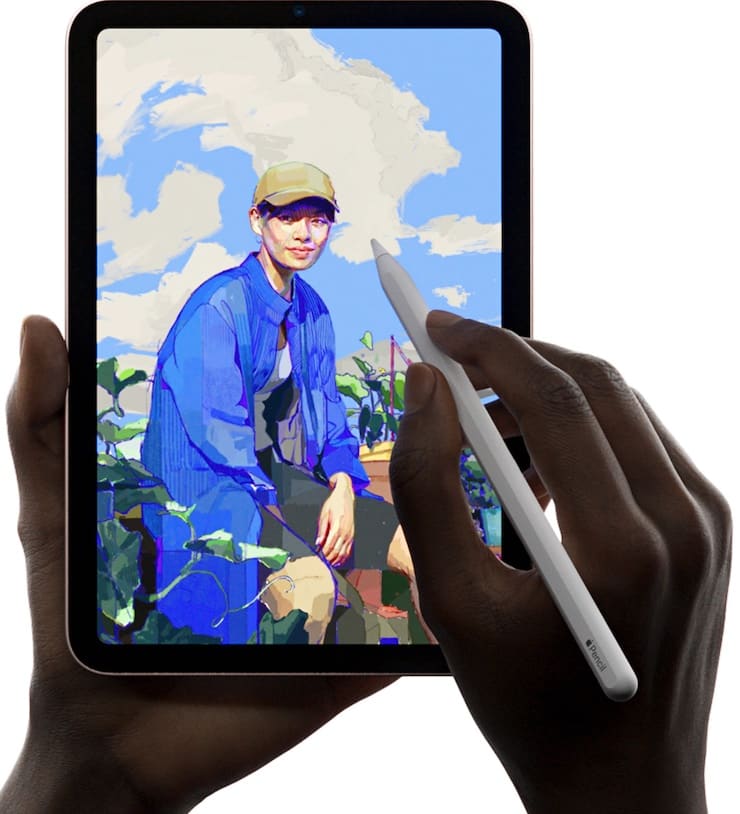 ♥ BY THEME: FaceTime audio or how to make free calls from an iPhone or iPad. 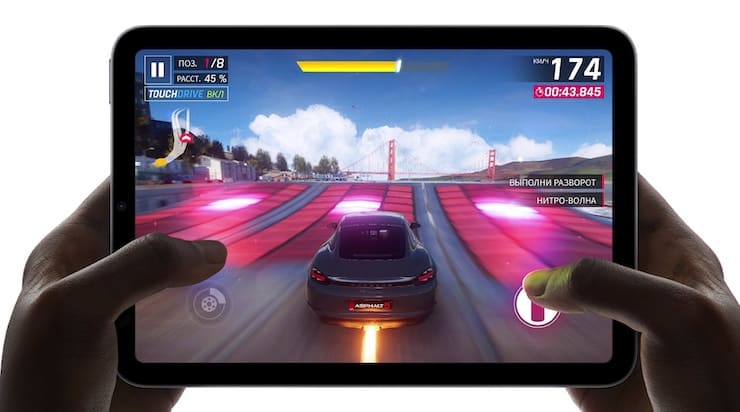 Over the past 2.5 years, separating the two generations of iPad mini, Apple has made significant progress in developing its own chips. Naturally, it was worth expecting the appearance of a new filling in the new tablet. iPad mini 6 got the most current chip – 5-nanometer A15 Bionic, however, with a slightly reduced frequency relative to the reference – 2.9 GHz. The amount of RAM has grown – now it is 4 GB. The drive options remain the same – 64 GB and 256 GB.

Thanks to a significant platform update, iPad mini 6 was 40% faster than its predecessor in a single-core test and by as much as 70% in a multi-core test. Graphics work with a 5-core processor is 80% faster, and machine learning with the Neural Engine is now twice as fast. It can be stated that such a power reserve will last for several years to come. On iPad mini 6, all applications literally “fly”, both built-in instruments and heavy studio ones. On the tablet, you can comfortably work with augmented reality, with realistic brushes, of course, play.

♥ BY THEME: Continuity Camera, or how to take pictures on a Mac with an iPhone or iPad camera. 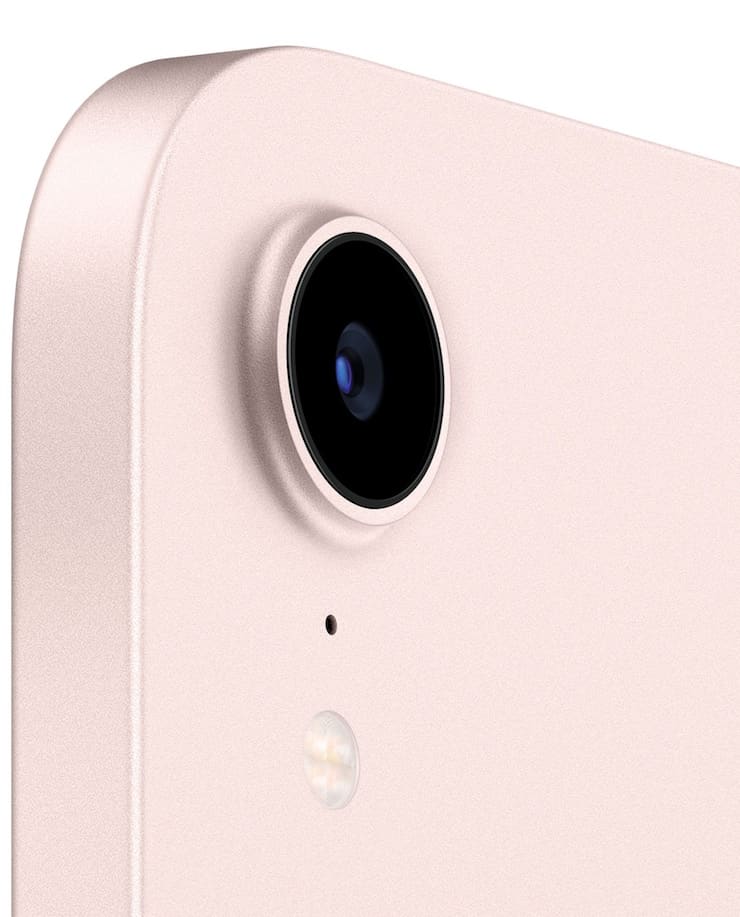 Not to say that the predecessor had cool cameras. But in iPad mini 6, this system has been updated quite well. The front camera has now become wide-angle, its resolution is already 12 megapixels, and the aperture is ƒ / 1.8. A True Tone Quad-LED flash has appeared, which significantly diversifies shooting scenarios in low light conditions. A powerful processor will help you process photos using Smart HDR 3. The camera can shoot videos up to 4K resolution and at 60 frames, there is an extended dynamic range when shooting up to 30 frames per second. 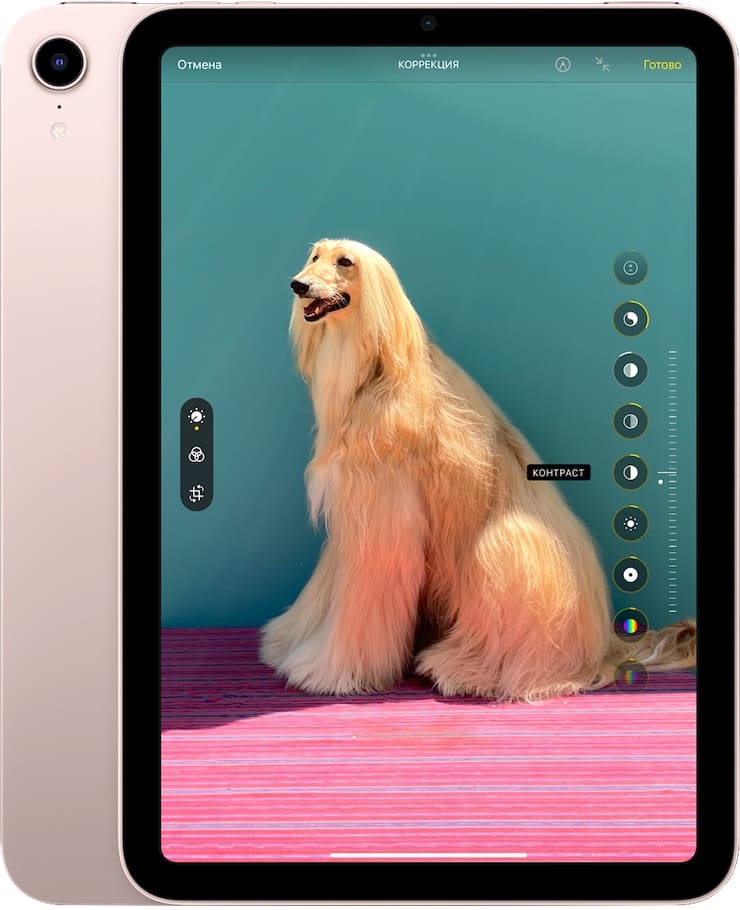 The front camera has also become better. Now it has become ultra-wide angle and received a resolution of 12 megapixels with ƒ / 2.4. The camera can do 2x zoom out. Another cool feature is Spotlight. During a video call, the tablet itself monitors the movement of the user, keeping him in focus of the camera while shooting. Photo processing is carried out using Smart HDR 3. The front camera can shoot video up to 1080p and 60 frames per second. High dynamic range is used when shooting up to 30 frames per second.

♥ BY THEME: How to transfer current call from iPhone to iPad or Mac. 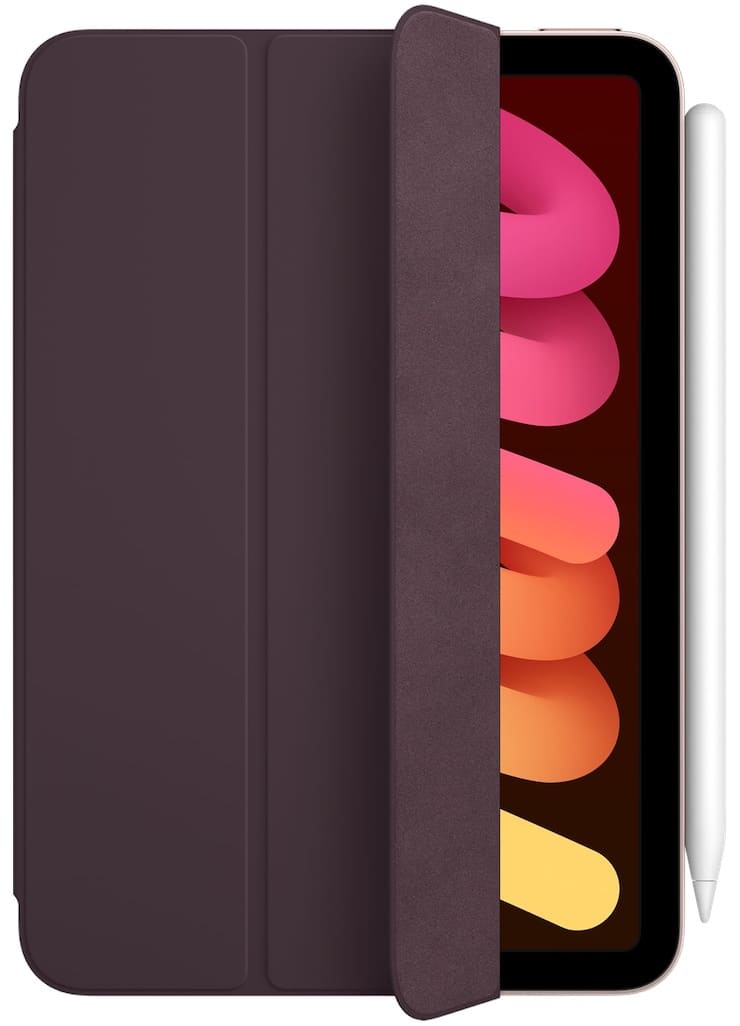 If initially only older iPad models could work with the stylus, then gradually the younger models also received support for the accessory. iPad mini 6 can work with the second generation Apple Pencil. The stylus can be magnetized to the body of the tablet, so it will always be at hand. Drawing tools can be easily switched by double-tapping above the nib. The stylus is charged from the tablet. 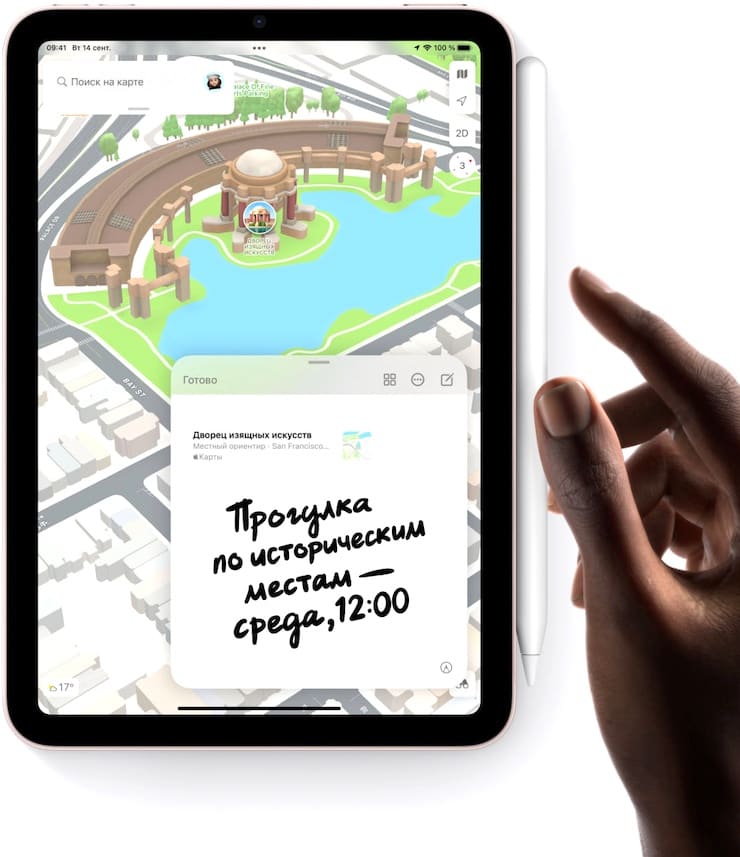 The new Smart Folio covers look great with iPad mini 6. They not only protect the device and its screen from damage, but can also act as a convenient stand.

For biometrics, the Touch ID sensor is still responsible, which has moved from the front side to the button on the upper end. Face ID support remains exclusive to the older iPad line. 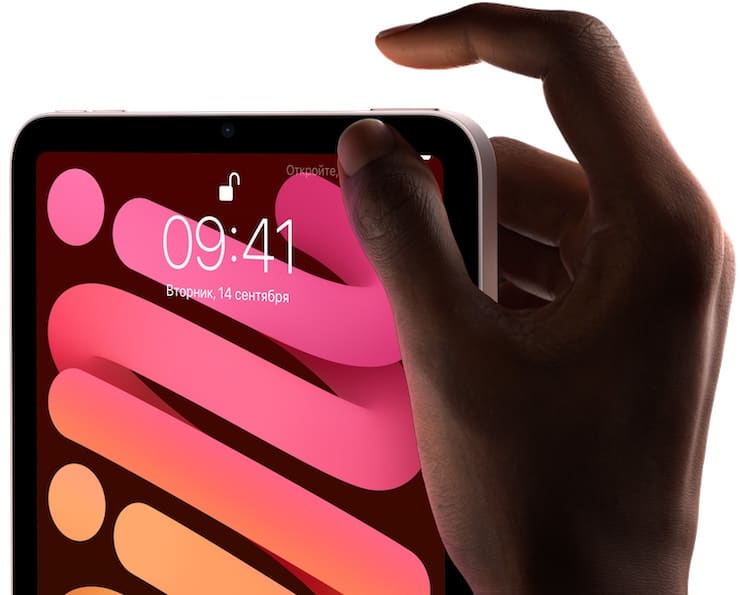 The autonomy of the device has remained at the same level, in fact, there have never been any special claims here. iPad mini 6 can last up to 10 hours when connected to Wi-Fi networks or watching videos, and up to 9 hours when using mobile networks.

The tablet has received an important innovation – now it is equipped with a universal USB Type-C port of the USB 3.1 standard for charging and synchronization. This made it possible to increase the data transfer rate by 10 times (up to 5 Gbps), and the connectivity of various accessories has improved significantly. 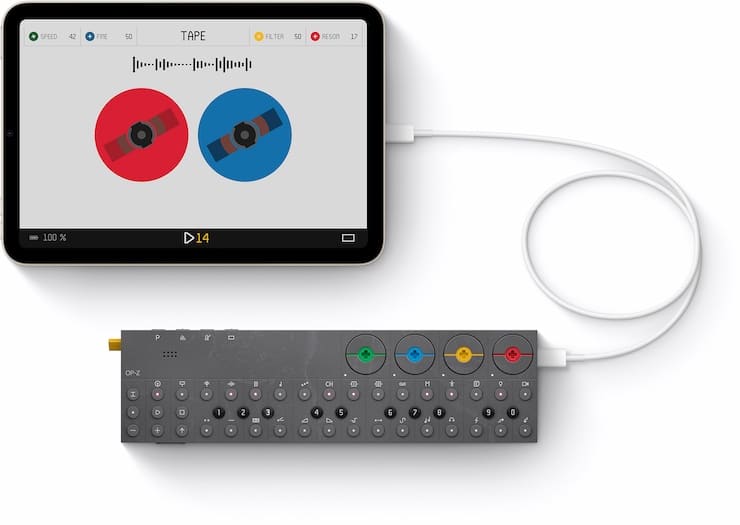 Interestingly, no matter how Apple denotes its desire to save on accessories in the name of the environment, in the case of the iPad mini 6, there was no situation similar to the latest iPhones. The tablet comes with a USB-C charging cable and even a powerful 20W USB-C power supply.

♥ BY THEME: How to gift someone a paid game, program, or movie from an iPhone or iPad.

♥ BY THEME: How to turn off hints (predictive typing) on ​​the iPhone or iPad keyboard.

iPad mini 6 received a cellular module with support for 5G networks, which should be noted. The iPhone introduced this innovation a year ago, so this step was expected for the tablet. Moreover, there is a new wireless module with support for the latest Wi-Fi 6 standard. Thus, iPad mini 6 can work with 802.11a / b / g / n / ac / ax protocols and simultaneously in two bands – 2.4 and 5 GHz. There is support for Bluetooth 5.0. An important feature is that the new cellular module has lost support for 2G (2G / EDGE). So if the tablet does not see networks of at least the third generation, then it will not work with the mobile Internet.

♥ BY THEME: How to add a voice alert when iPhone or iPad is charging.

Depending on the storage capacity and the availability of a wireless module, the price of iPad mini 6 is formed. Coloring does not affect it in any way. “Minik” did not turn out to be cheap, but you have to understand that now it has got an up-to-date design and top-end filling: