Jeans were accidentally created by French designers in the 1700s when they were trying to recreate a thick fabric called twill. Instead, they ended up with the serge de Nimes, now known as denim. 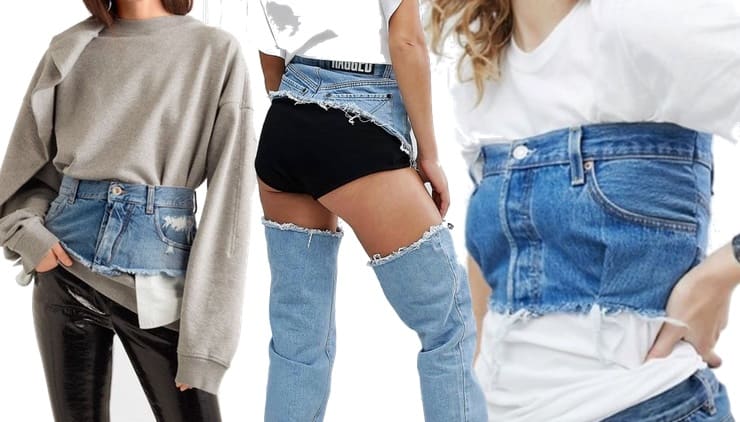 The fabric was launched when Levi Strauss brought it to the United States in 1853 and made durable trousers that could withstand both the harsh conditions of the mines and long expeditions to the “Wild, Wild West”. In the 1960s and 1970s, blue jeans became as much a counterculture symbol as rock music and anti-war demonstrations. 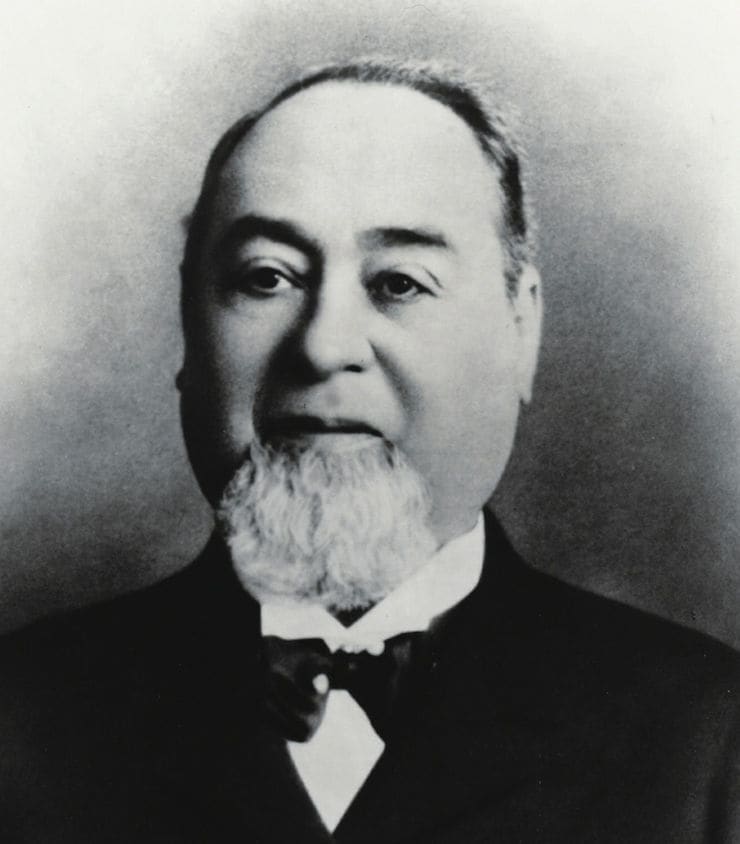 If you consider “ripped” jeans to be unusual clothes, then wait, below are some models of jeans that Levi Strauss would hardly approve of.

♥ BY TOPIC: Most Popular People on Instagram – 40 accounts with the most followers.

Worst attempt at a denim belt 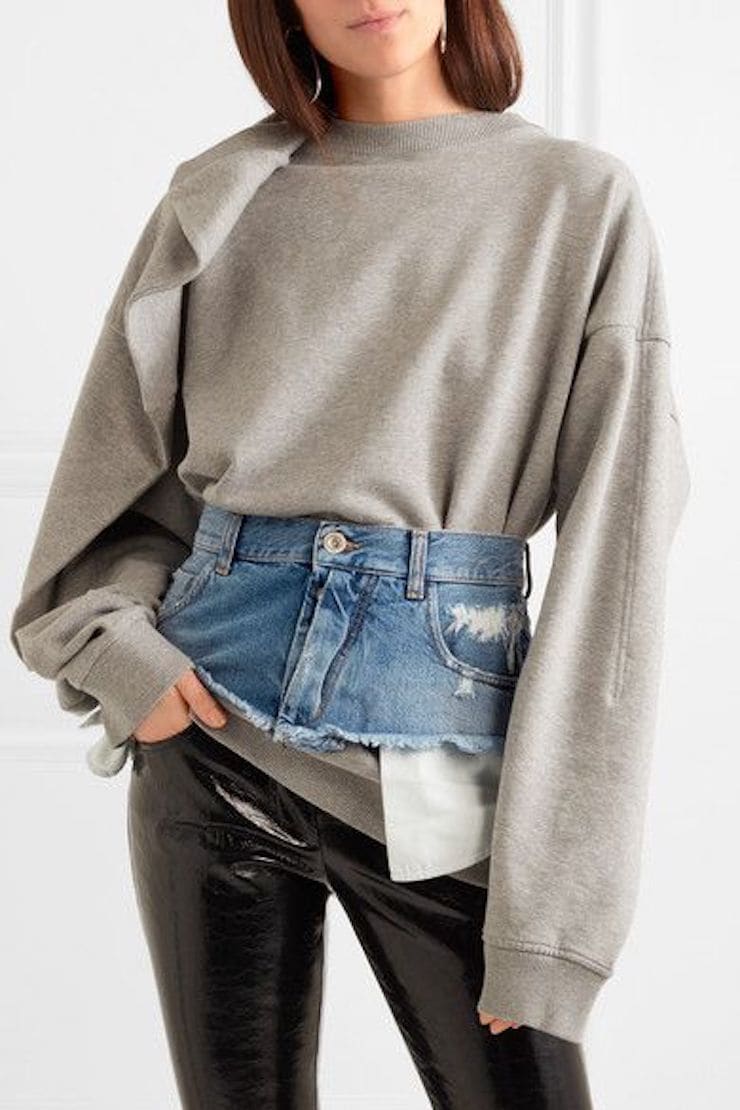 Who asked for this? Who approved this? This “denim belt” is literally one belt from another pair of jeans. Why are there lightning on them? And why unbutton it?

Unravel Project’s designers originally offered this loincloth for $ 405 at Net-A-Porter. By some miracle, they managed to sell them all.

The asos.com clothing store, in turn, offers a stripped-down version of the belt: 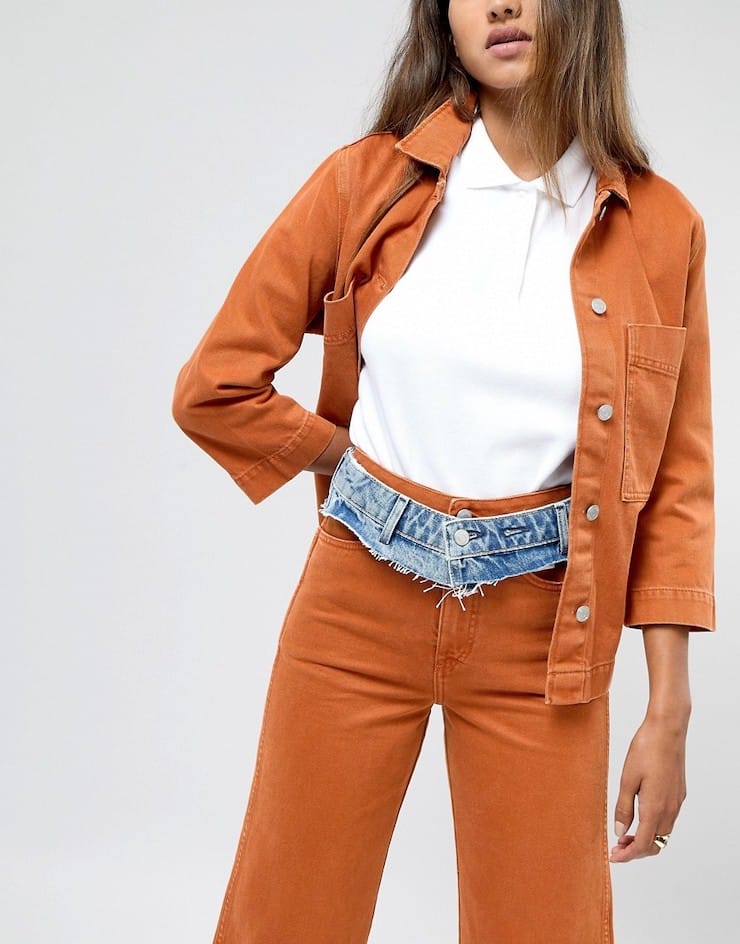 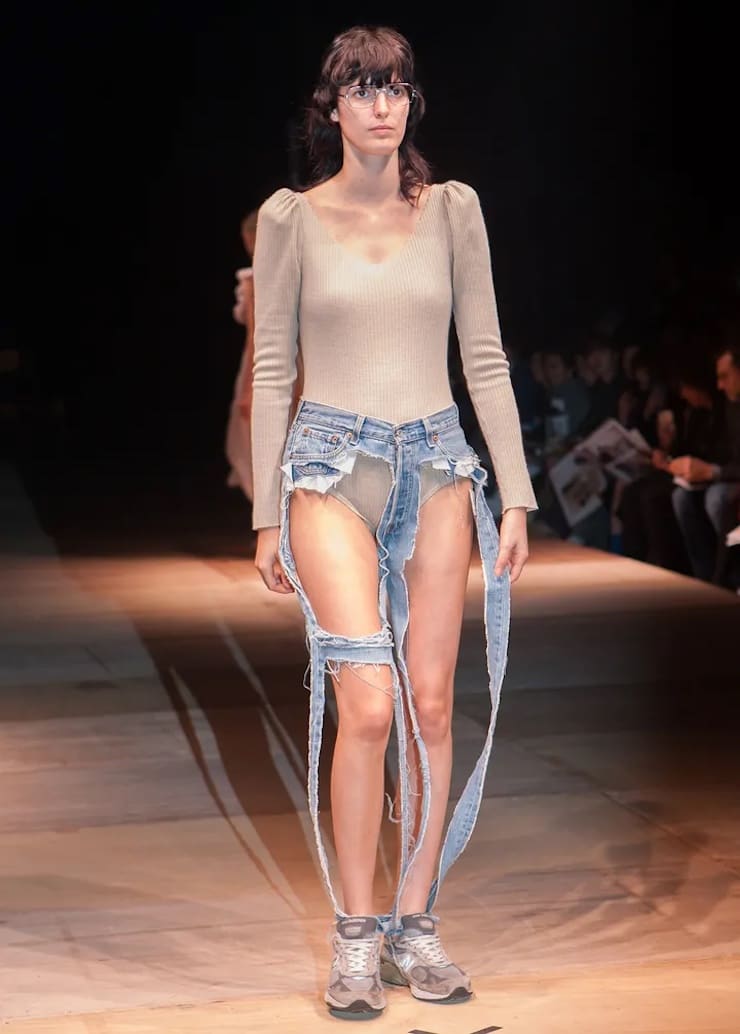 In 2017, Amazon Fashion Week Tokyo featured the nudeest pair of jeans ever. These “trousers” are simply made up of seams. 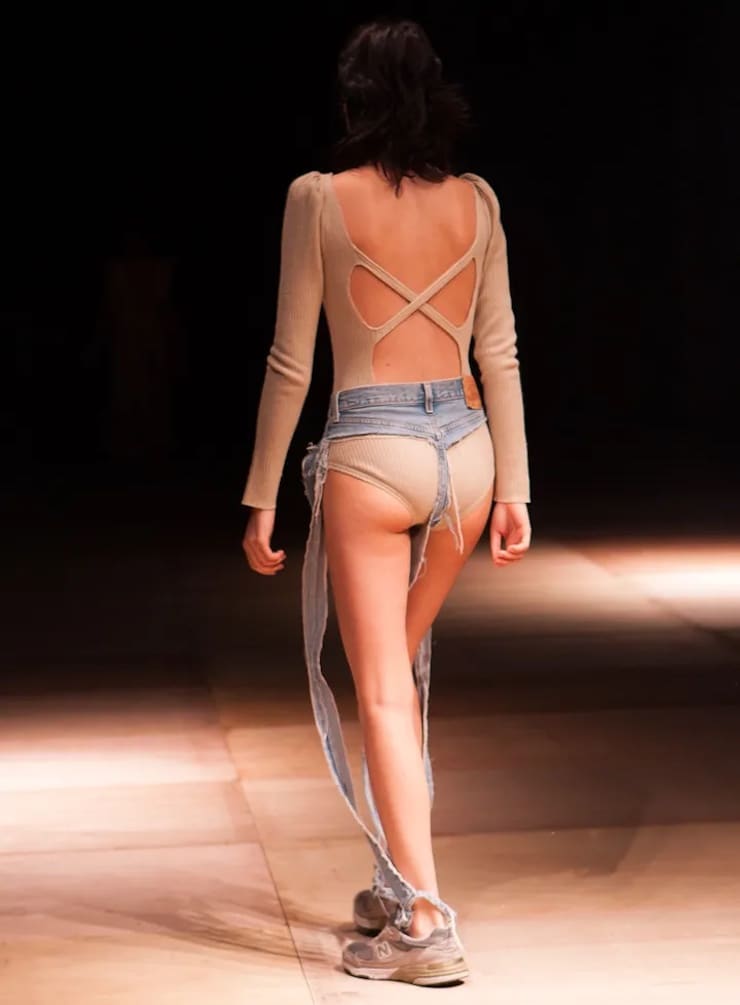 Capitalism as it is. Camar’s Ultra Cut Denim is $ 168 for a denim belt with a pair of threads dangling from it. If these pants are found in archaeological excavations 10,000 years later, they will immediately show exactly which moment was the starting point of the decline of human civilization. On the other hand, according to the product description, jeans are very “loose and comfortable”. 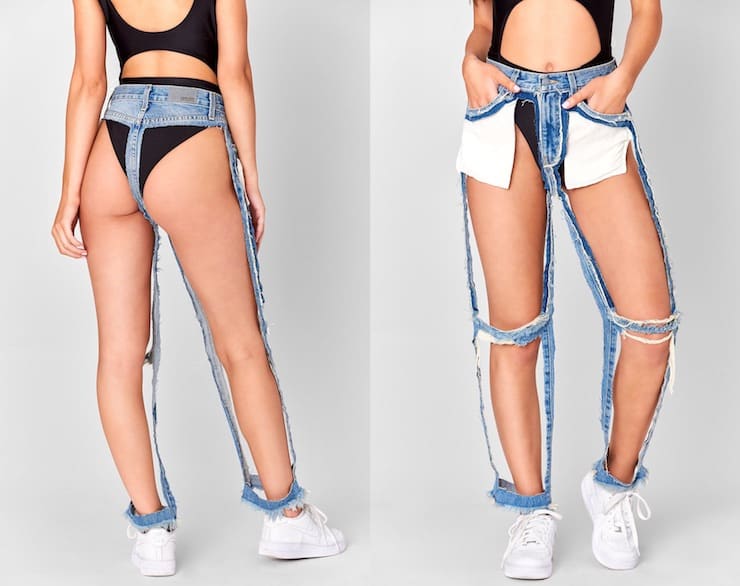 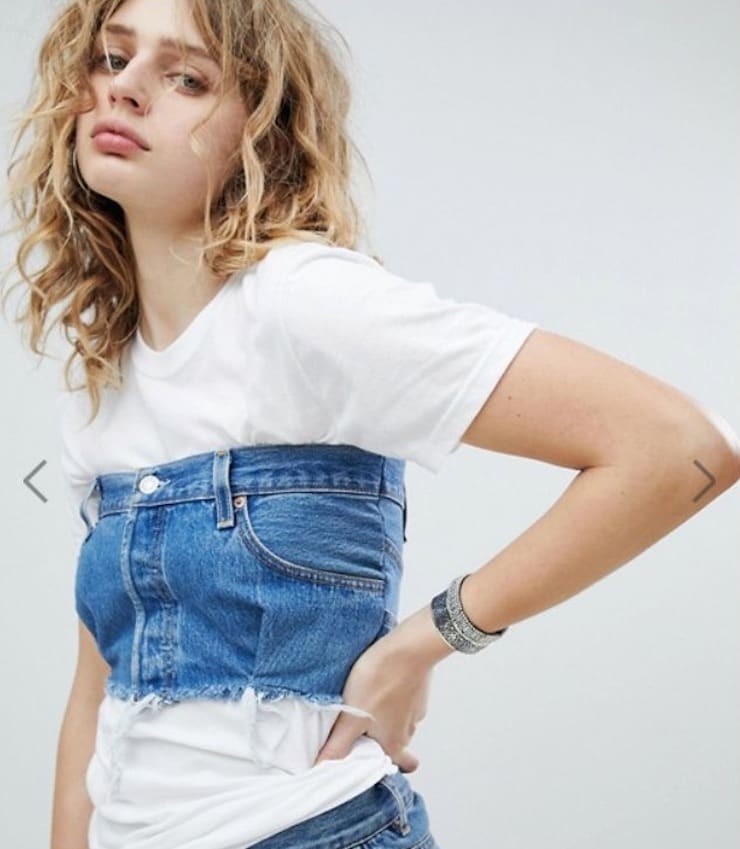 The model’s face speaks for itself: “I made a serious mistake. Please, help”.

This “vintage recycled denim bra” is essentially a denim belt sewn onto a plain white tee. As the product description suggests, the cutout denim insert is perfect for those looking to experiment with different types of fabrics. Jeans can be purchased for a perfectly reasonable price of $ 56. 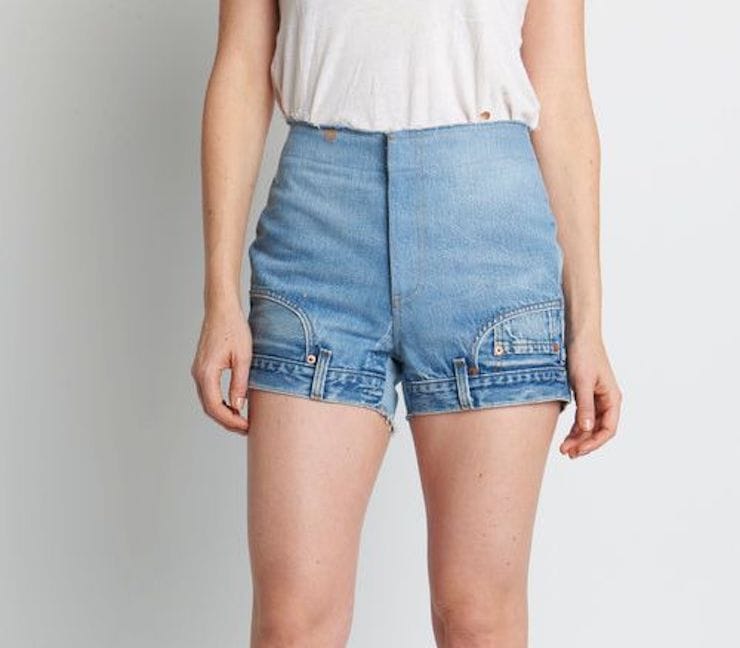 Not so long ago, jeans and high-rise shorts, which were very popular at the end of the last century, began to return to fashion. You do not need to conduct a special survey to establish – the majority of men are strongly against such rarities on female bodies. However, fashionable sentences are passed not at all for the majority, but for very specific categories of people in whom an additional chromosome is responsible for such outfits. Now you can stand out from the gray mass and collect the talmud of obscene criticism addressed to you in the new inverted shorts for walking on your hands. To completely isolate his textile masterpiece from the mediocre commoner, the designer set a price for it close to $ 400.

♥ BY TOPIC: 30 most famous fake photos you could believe in 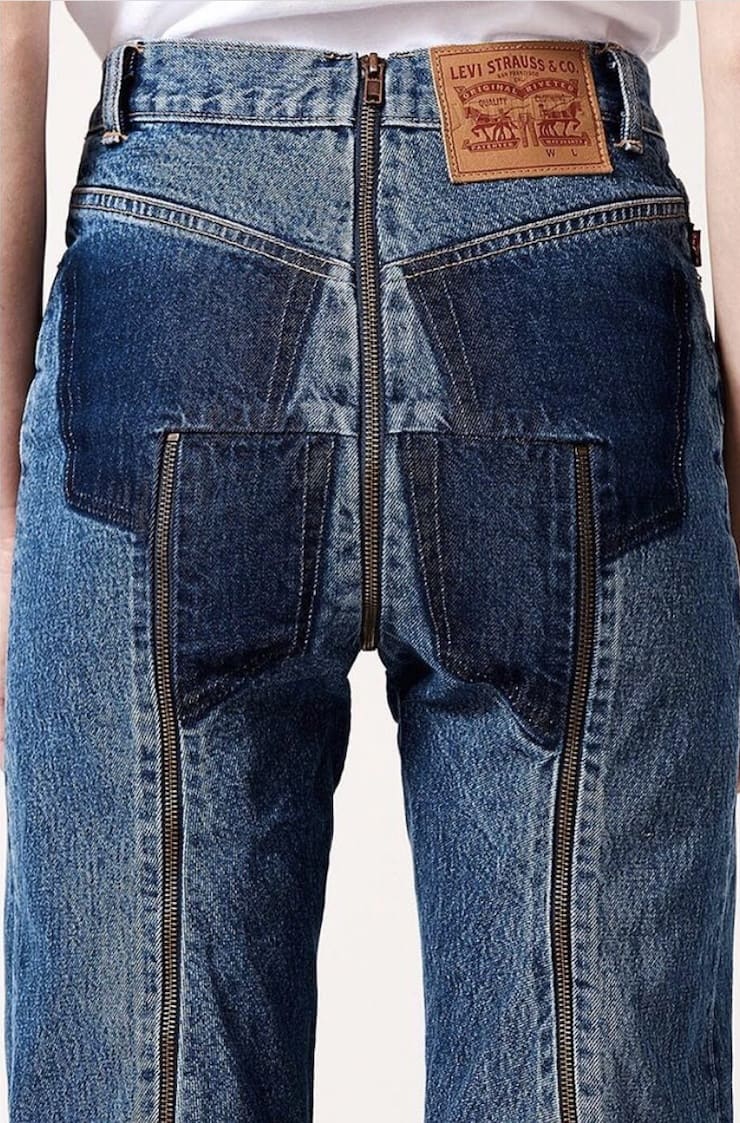 Vetements, in collaboration with Levi’s, has presented jeans that feature a patchwork quilt of different shades and inconveniently positioned zippers. It is noteworthy that the cost of such trousers (moreover, without back pockets) is from $ 1700. 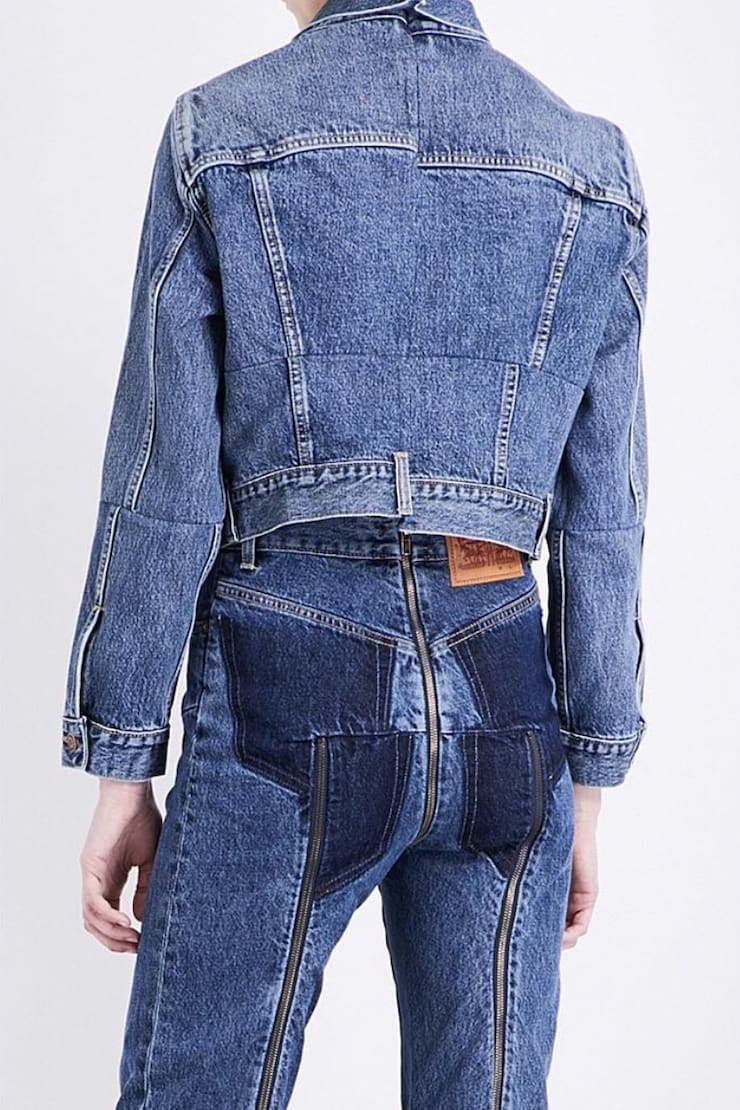 Jeans of the cowboy who never got off his horse 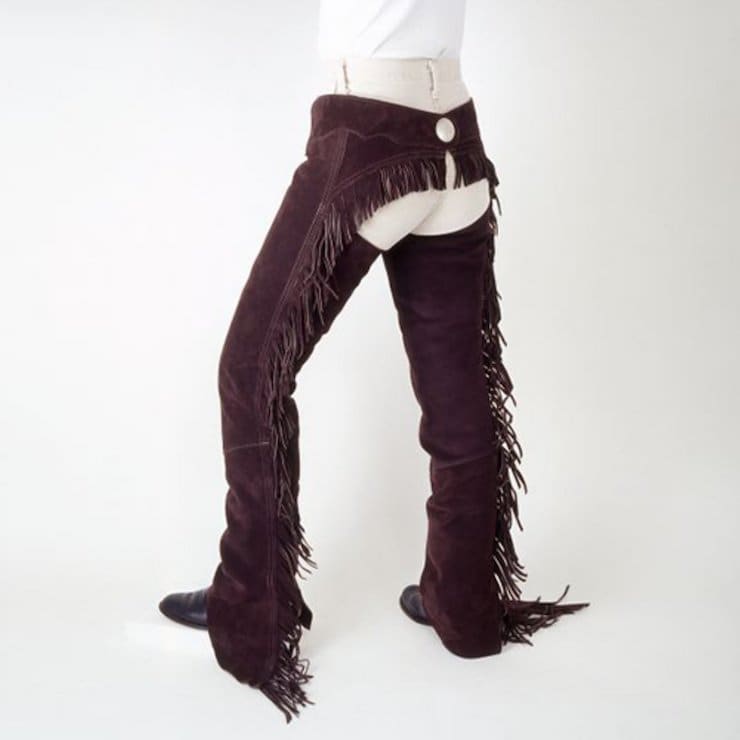 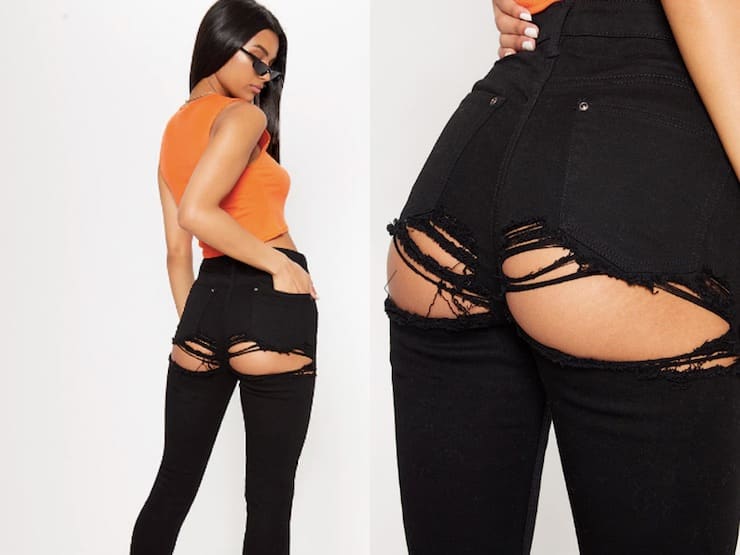 Many schoolchildren had a nightmare in which their pants tore at the fifth point right during their studies. Good news! Someone turned this hell into reality. You can demonstrate your merits to the world for only $ 33. Psychological trauma from childhood is not included in the package.

High-waisted jeans from the depths of hell 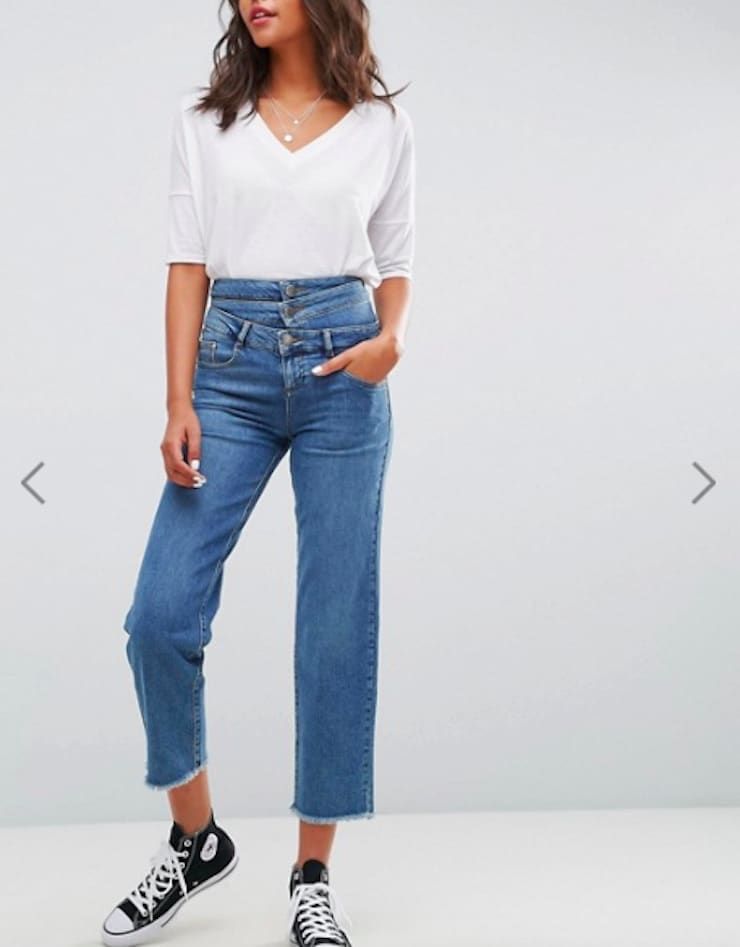 “Shouldn’t I take something very good and make it awful,” a designer once thought and created these hellish pants. ASOS Straight Leg Triple Waistband Jean in Vogue Blue features trendy straight legs and 3 waistbands. Unfortunately the model is already out of print, but you can recreate it with old pants and a genuine hatred of practical clothes. 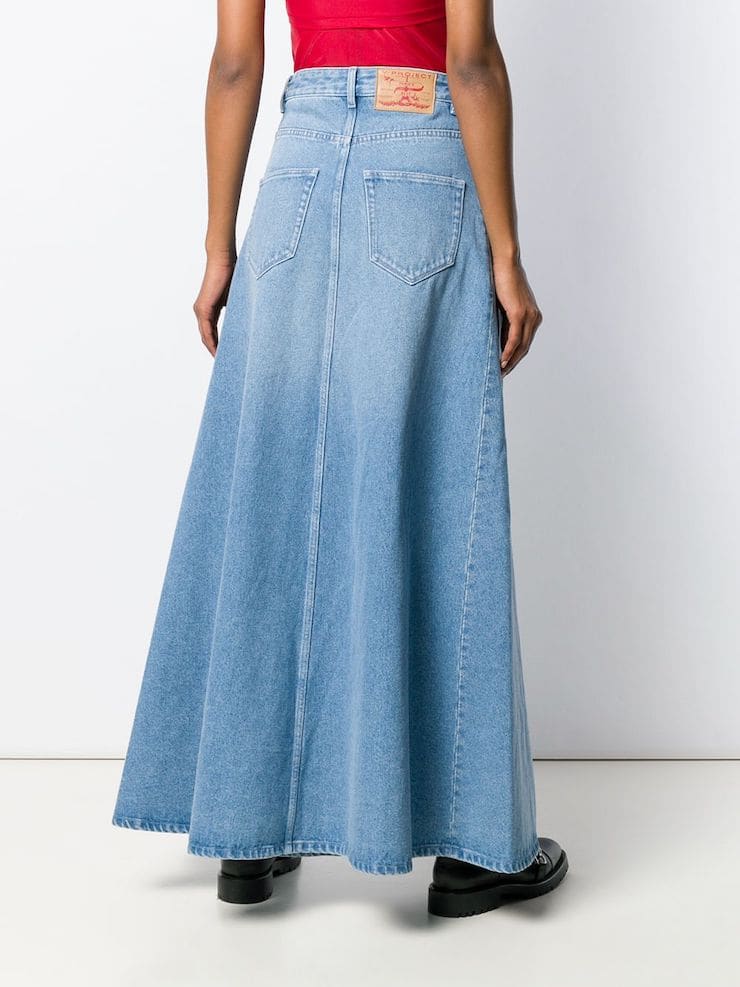 Probably this is the case when the designer designed a denim skirt and then forgot…. and attached a leg. 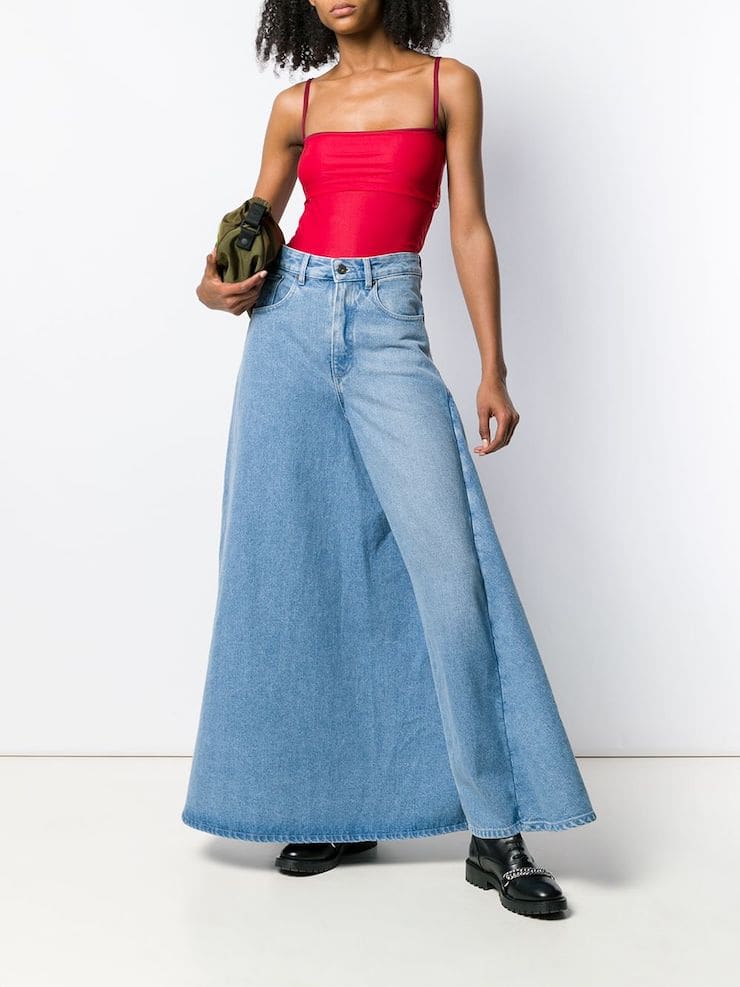 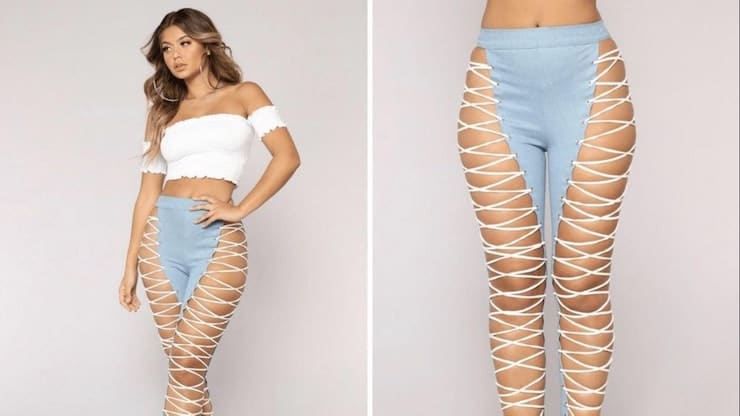 If you’ve ever wanted to look like you were dressed in an adult diaper, then you can skip reading. Instead, hurry up to buy Wild Thang Lace Up Pants from Fashionnova. The pants are fully open at the front and are equipped with a zipper to make dressing more comfortable. The jeans are also available in camouflage colors in case you need to hide in the woods. 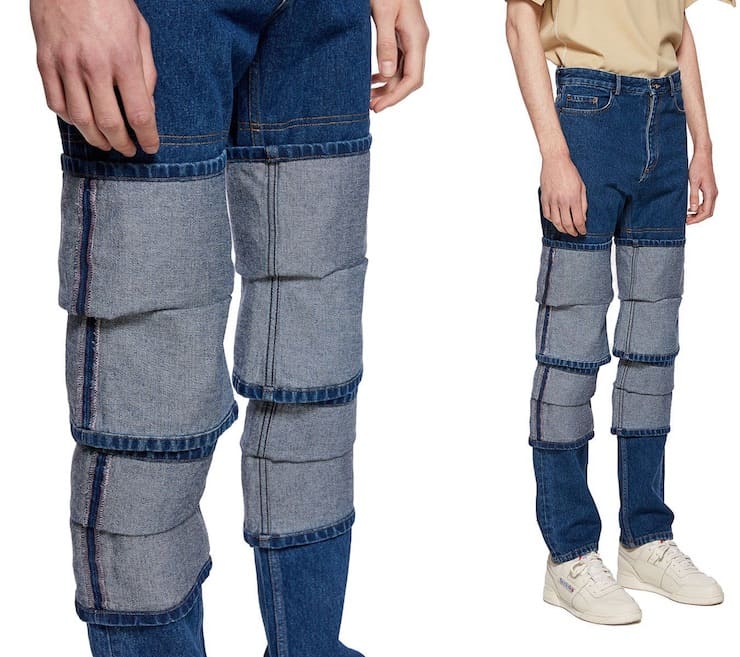 What’s worse than double cuffs on jeans? Four cuff! The new model from Y / Project is announced as unisex, which is progressive. The jeans have four cuffs sewn over the knees, which is even more progressive. You can buy them on odd92 for as little as $ 525. 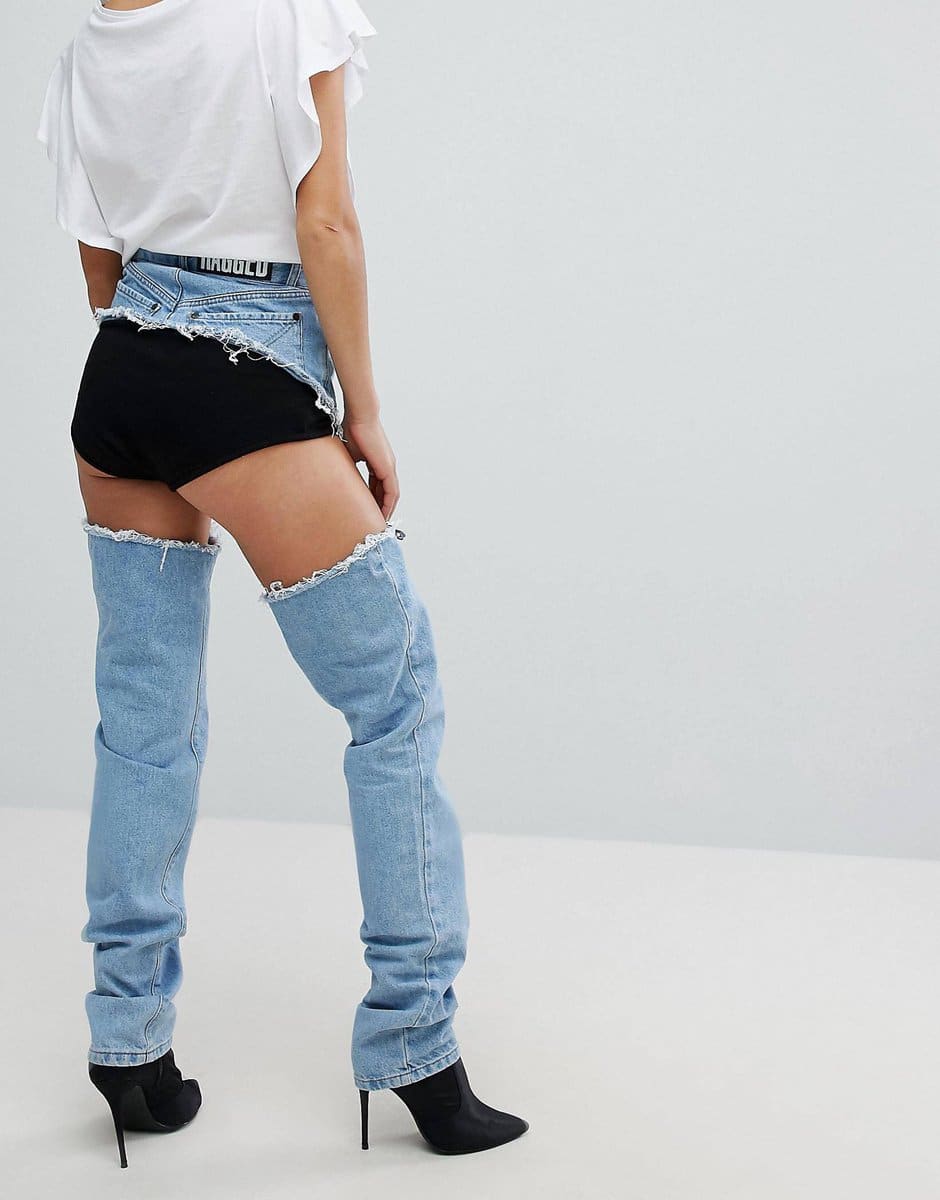 Designers, have you ever tried?

All pants have one basic function – to cover causal areas. This model does not even cope with this. The jeans were priced at $ 100.