At one time, webcams were a breakthrough technology. Today, not a single smart home can do without them. These devices provide reliable protection day and night. But life makes cameras evolve. These are no longer just “eyes” with low resolution and fixed focus. EZVIZ has created a simple, inexpensive, but at the same time advanced smart device – a TY2 PTZ camera with the ability to work in Wi-Fi networks. It has a 360-degree field of view and advanced tracking features cover the entire room. 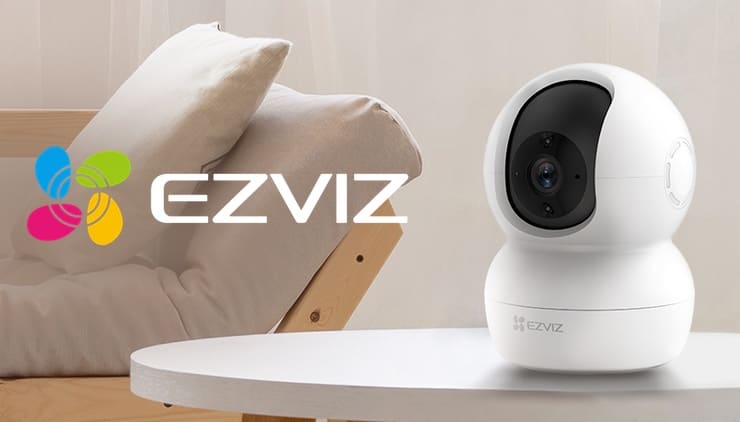 The camera comes in a white thin cardboard box with a picture of the device on its front and a resolution of 1080p. The back side lists the main functions of the camera. Inside is an already completely white cardboard box, in which all the details lie. 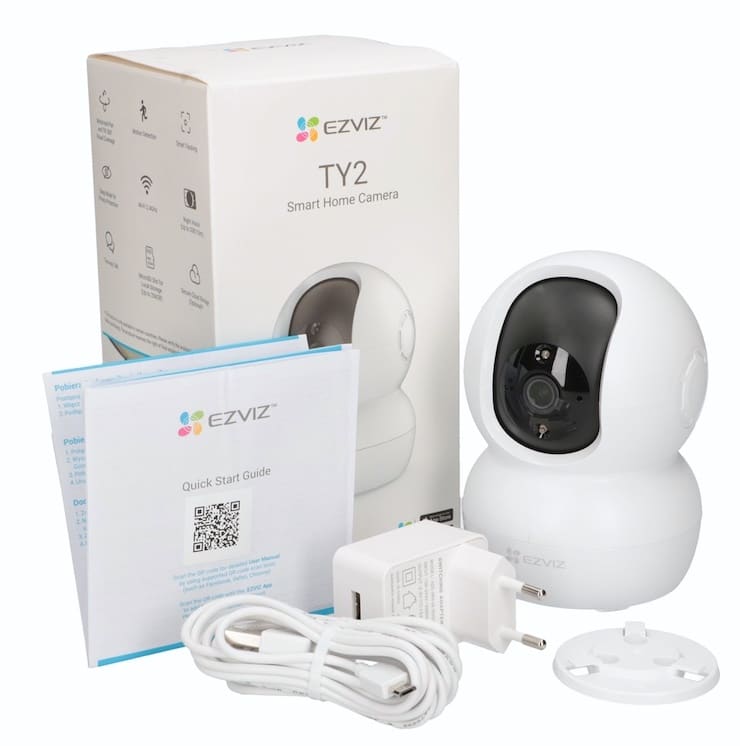 In addition to the camera itself, the kit includes a base for mounting to a horizontal surface, including the ceiling. Holes can be drilled using a special template, and a screw fixing kit is also available. The camera comes with a microUSB power cable and separate adapter, as well as a couple of quick start and regulatory brochures. The attached QR code allows you to quickly connect to the device. 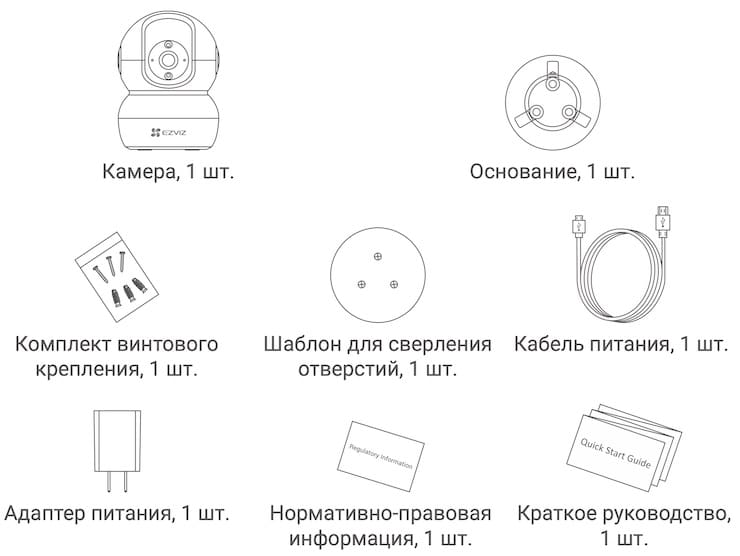 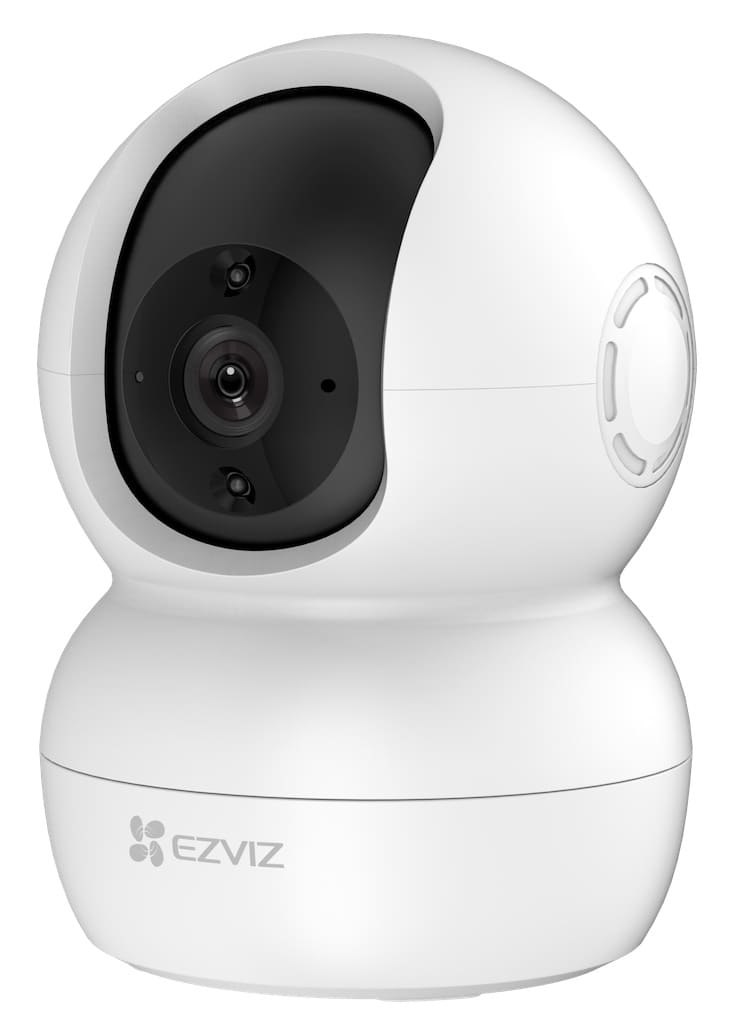 The camera got a somewhat futuristic look and looks like a robot from a cartoon. The device consists of two balls placed on top of each other and fused together. Moreover, the lower one will be flattened at the bases. There is a recessed oval cut in the middle of the upper part. In it, behind the plastic, the lens itself is hidden. On its left side there is an LED indicator, and on the right – a microphone.

Under the peephole, there was a place for a slot for a microSD card and a reset button, in order to access them, you need to raise the lens as high as possible.

On the back side, most often hidden from outside sight, all the elements are located on the lower half of the device. Above you can see the speaker grid, and just below there are a couple of ports: Ethernet and a power jack. 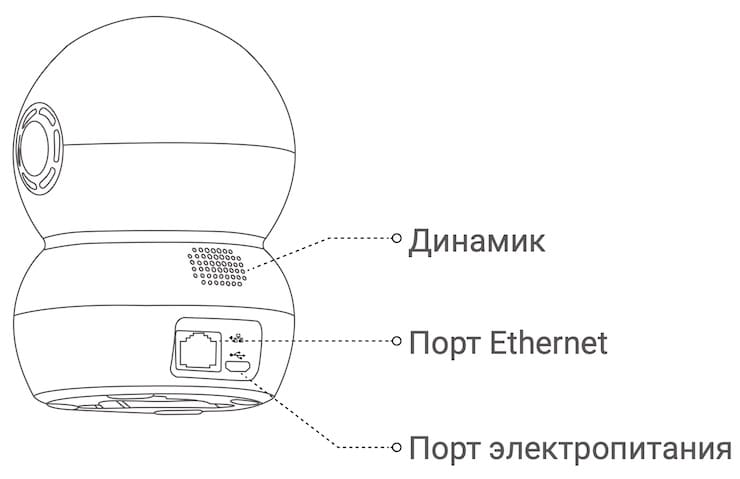 On the lower half, under the camera eye, there is a light gray manufacturer’s logo. It looks stylish and quite appropriate there. 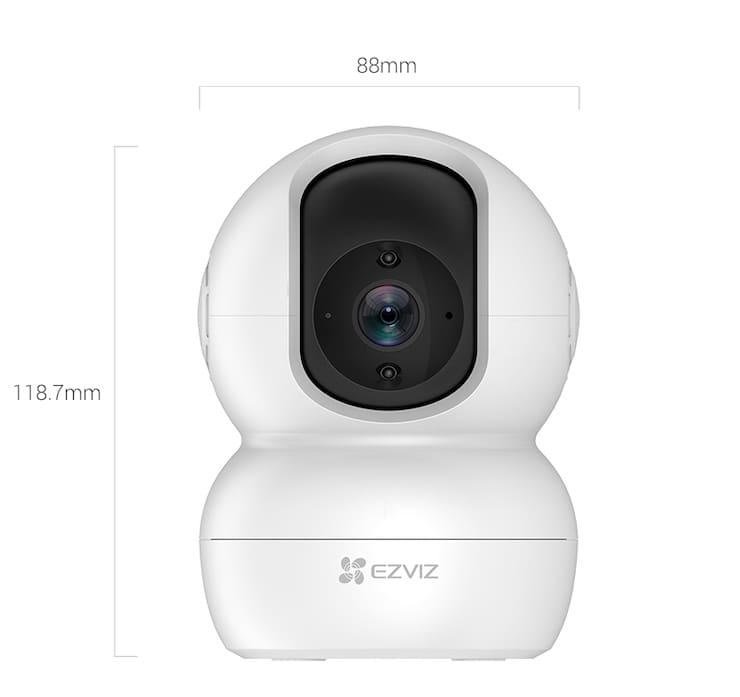 The main feature of this camera, which makes you pay attention to it, is the absence of blind spots. The bottom half can be rotated horizontally up to 340 degrees, and the camera peephole in the recess rotates 55 degrees vertically. This feature of the device allows you to cover the entire room with a gaze – the camera is not tied to a fixed observation of one point. 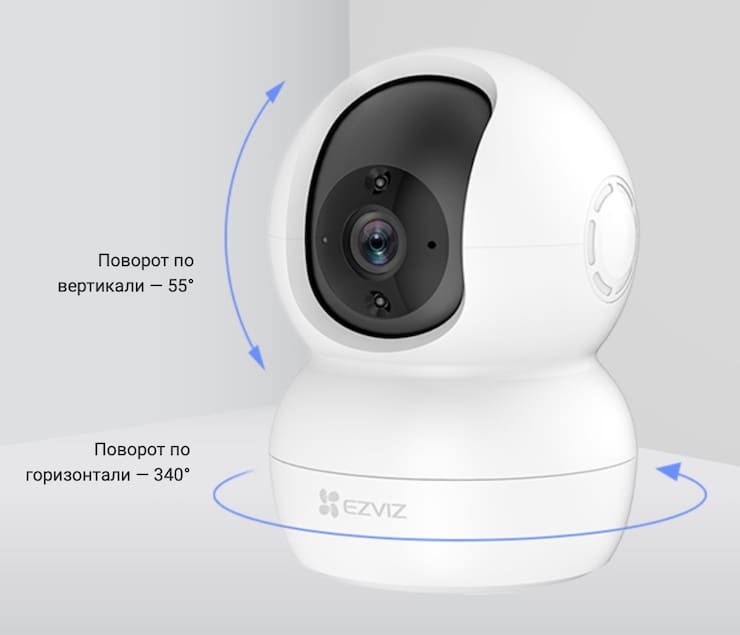 Another important camera function is smart tracking. As soon as the camera captures a moving object, it starts tracking its movement with parallel broadcasting of video in real time to the remote phone. 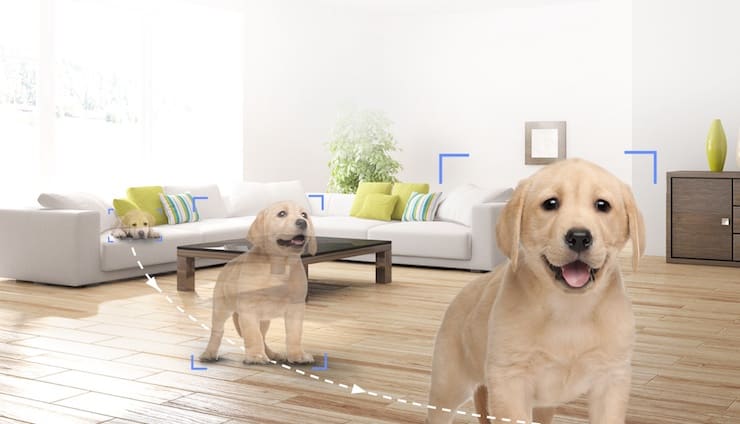 At night, the camera does not stop and the functionality is not lost – powerful IR LEDs allow you to photograph objects at a distance of up to 10 meters from the device even in poor lighting conditions. 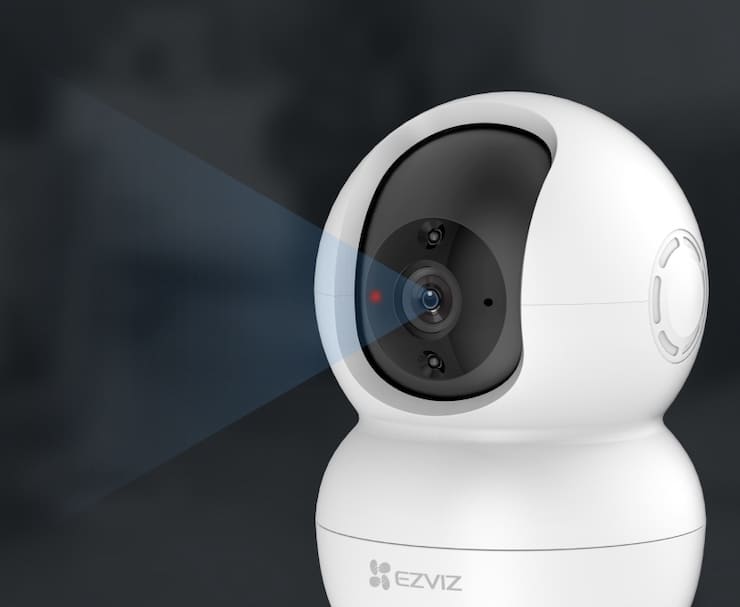 A speaker for a webcam is a rarity, but in this case its presence is understandable and justified. TY2 makes it possible to implement two-way voice communication, which allows you to both communicate with loved ones and banally scare away intruders who invaded the house. Voice transmission to the camera speaker is carried out through the proprietary EZVIZ application. 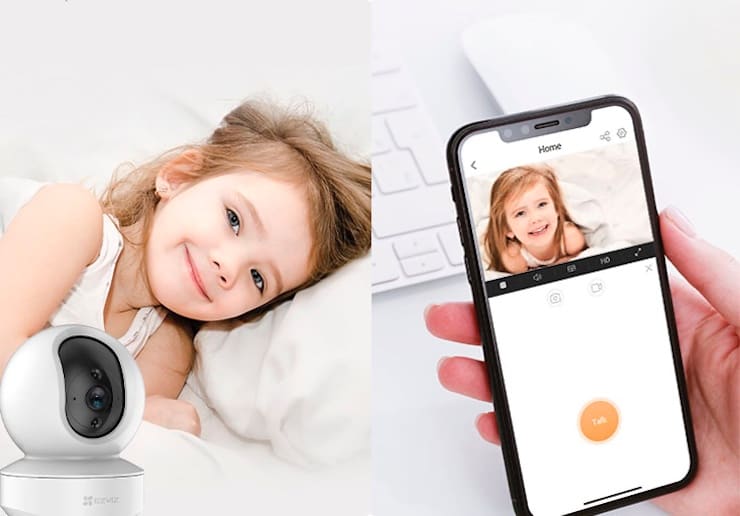 The manufacturer pays special attention to data security issues. As part of their protection, end-to-end encryption of the video stream transmitted from the camera to the cloud is performed (the volume is provided free of charge for a time), and only the user himself has the decryption keys. It has the ability to switch the camera to sleep mode using a proprietary application. Connecting to the network is possible both through the Ethernet port and via Wi-Fi, which allows the camera not to be tied to cable networks.

You are offered to choose one of several options for storing data. The user himself can decide where the captured video will be stored. This can be a microSD card (supports media up to 256GB), encrypted cloud storage, or an NVR. At the same time, the camera is able to save the video stream simultaneously to all three different sources, which implements the backup function in case of damage to the device.

And the camera control center is the proprietary EZVIZ application, which makes it possible to take videos or pictures, publish them. Directly from a mobile device, you can select the picture display mode, view the video archive, control the camera, including activating the eightfold zoom.

Setting up the EZVIZ TY2 camera

When turning on the camera for the first time, pay attention to the LED indication. If it is solid red, then the camera is starting up. If the red light is blinking, there is a problem with the Wi-Fi connection. Fast blinking – problems with the device itself, it is worth checking the memory card first. When the LED is solid blue, it indicates that you are watching a video or playing it in the EZVIZ App. A fast blinking blue indicates that it is ready to use a Wi-Fi network. A slow flashing blue light indicates that the camera is operating normally.

So, after connecting the camera to a power source, you will need to connect to it. To do this, your mobile device must be on a 2.4 GHz Wi-Fi network. This is an important point – more and more often there are dual-band routers that automatically switch the network mode for devices. As a result, it may turn out that the phone with the camera will end up on different networks and will not see each other during the initial setup. In the future, the mobile device can work in any networks anywhere in the world – access to the camera will be provided.

After installing the EZVIZ app from the App Store or Google Play, you will need to launch it and go through a simple user registration. Now you need to add your camera in the application. On the home screen, tap the “+” icon in the upper right corner to launch the QR code scan window. You can find it on a paper sticker included with the camera or on the bottom of the device itself. Then the application will complete the configuration with a few steps with questions.

In the main window of the application, you can see a large icon with the name of your camera. Just click on it and you will be taken to the device management window. There are not many functions here: Video Archive, Snapshot, Record, Shift / Tilt (control the camera motors to move the focus), Talk (voice transmission) and Resolution.

See also  DISCOUNT (459p → 99p) Review of the game Felix the Reaper: the dancing reaper from the Ministry of Death 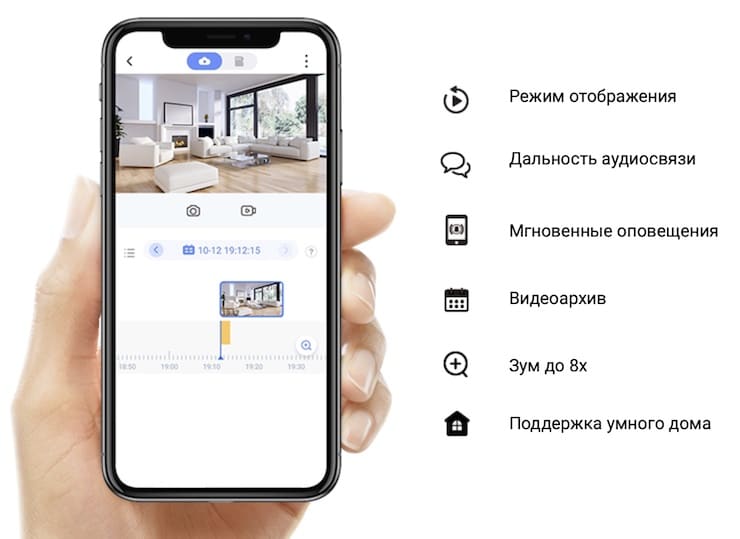 Please note that after inserting a memory card into the camera, you need to initialize the media. This can be done in the EZVIZ app by going to the device setup window and selecting Storage Status. If the memory card is displayed uninitialized, then you must click on the corresponding icon. After the state of the media switches to “Normal”, you can use it to store data.

Price and where to buy the EZVIZ TY2 camera?

The camera is sold in all major retail chains, online stores, as well as through official distributors of EZVIZ, including: AliExpress, Svyaznoy, Citylink, Ozon.ru, M.Video, Detsky Mir, Eldorado and many others. A complete list of stores can be found on this page. 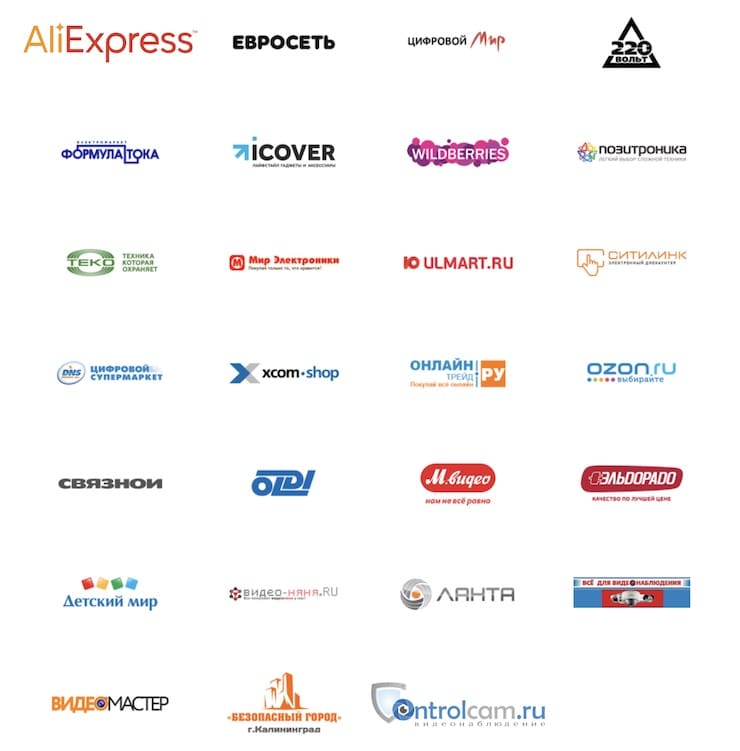 The TY2 webcam from EZVIZ is a new generation device. Intelligent functions and a 360-degree view significantly expand the possibilities of video surveillance, two-way audio communication proves to be a very successful solution. The laconic and stylish device will fit into any interior and will become an integral part of your smart home.