The protagonist of this game will repeatedly ask: “What am I doing here?” Believe me, the same question will arise for you. But an unusual and frankly incomprehensible game will gradually open up, give answers to many questions and allow you to spend time with it with some benefit. 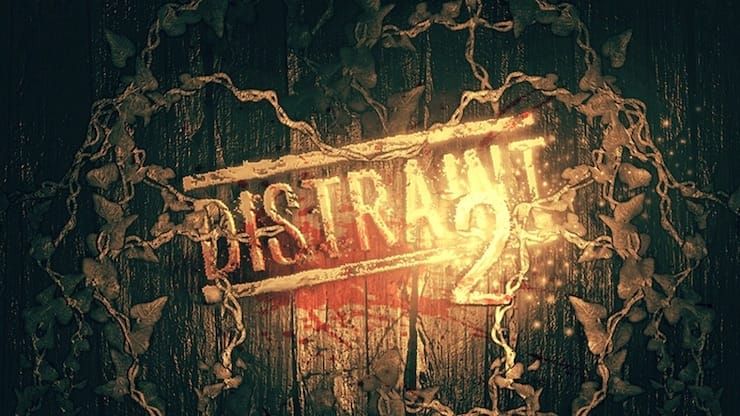 Our hero, Casey Price, already in the first part of DISTRAINT showed himself to be a doubting person who, due to his job duty, is constantly in a moral internal conflict. Casey has to be torn between decency and the thirst for material enrichment. On his way, there are ordinary people whom he has to trample. As a result, Casey plunges headlong into doubts, fears and despair. It is in this state that we find him in the prologue to the second part of the game. Casey has the gun to his head and is ready to pull the trigger. This is where the game action begins.

Our hero unexpectedly found himself in an interesting world, in which all actions will take place. Casey wanders the corridors in 2D. The controls are very simple – four cursor buttons are shown on the left side of the screen, but only two of them are responsible for moving to the right or left. The other two are needed to interact with objects. On the right side of the screen, there are three more buttons that are responsible for the character’s actions – talking, running, and others, depending on the scene. Setting aside the entourage, the game is a flat platformer with transitions between levels through doors and a few puzzles. They are simple and do not distract from the plot, forcing to periodically switch from feelings to logic.

Casey slowly wanders the corridors, hiding from hostile entities, looking for objects and using them. There are not even walls in this world – the hero goes into a gray trembling fog. The creator of the game hints to us that consciousness has no boundaries – there are only barriers set up by us.

But it is precisely the entourage that is that important component of the game, which makes it special. Casey has a long and difficult way to go, but not to a material prize, but to his Hope. After all, it was her that he lost, performing the work of confiscating property from ordinary people. The road to the goal will be difficult for our character. Too many doubts have accumulated in him. And his friends, enemies and obstacles are the abstract concepts of Greed, Fear, Reason, Consolation. Their humanization and dialogues with them allow you to establish communication with your own soul. Casey will have to plunge into memories, talk to her parents. It is important not only what he is doing here, but also how did he become so? The journey within herself will be a serious test for Casey. This is what the game is about.

Surprisingly, the DISTRAINT series was created by only one person – Finn Jasse Makkonen. He also has other 2D horror experience, Silence of the Sleep. The love of this genre has allowed a solo developer to create true original masterpieces with a deep storyline.

The story turns out to be difficult not only for our character, but also for the player. And this is not about the ability to quickly press on-screen buttons at the right time. Casey’s doubts and worries will certainly resonate in our souls. The proposed metaphors are obvious and universal, and they make you think. There is also room for drama in a psychological thriller. We will be told what it can cost to suppress feelings and complex emotions and how psychological trauma from childhood can affect later adulthood.

The game turned out to be more serious and deep than its first part. Nevertheless, there was a place in it for secrets and even humor. The graphic component has not changed. Music does not come to the fore, but complements the overall spirit of the game. And the original pixel art forms the atmosphere of the “horror” genre. It is no coincidence that the whole game of the hero is pursued by a monster that personifies precisely Fear. But dullness and despondency are successfully combined with bright and juicy locations.

DISTRAINT 2 is an interesting project, but it also has its drawbacks. The puzzles are too simple, which can make players who do not want to delve deeply into themselves get bored. And the frightening atmosphere is not formed by monsters or mysterious objects, but by choking thoughts and self-digging. But DISTRAINT 2 has much more advantages – with the help of minimalistic design, the author was able to create an atmospheric space, show the deep feelings of the protagonist and make us think about our own actions.