There are not many games out there that have continued to be popular even years after their release. Platformer Alto’s Adventure is one of such projects (included in the TOP-100 of our most favorite games). The developers from Team Alto managed to create a small masterpiece with an unusually beautiful world and uncomplicated game mechanics. 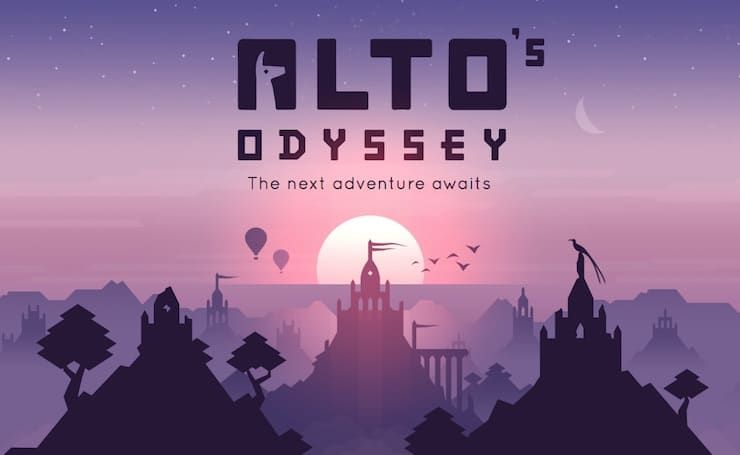 According to the developers themselves, Alto’s Odyssey was never regarded as a sequel, rather they tried to create “another game in the same world, focused on other emotions”. To some, these words will seem like the author’s gibberish, but try to play both games, and you will immediately understand what it is about. Alto’s Odyssey not only looks different from its predecessor, but also feels completely different.

First of all, the authors transferred Alto’s adventures from the snowy expanses to the desert, replacing the bright color palette of the first game with a warmer and darker environment. The endlessly beautiful desert feels tougher than the snowy slopes of Alto’s Adventure, and the new landscape is challenging.

Odyssey is more introspective and after a few hours of playing you will notice that your mood has become calm and contemplative. Alto’s Odyssey is a game that will make you feel, and this is a rare quality for mobile projects. However, Alto’s Odyssey succeeded through a masterful combination of incredible visual style, music and gameplay.

“Moving” from a cold country to the desert did not deprive the sequel of the usual fun. The game perfectly takes advantage of the new setting, developing and improving the concept and play style of the previous part.

See also  How to sort, search, and organize emails in Mail on Mac (macOS)

The developers did not change the game mechanics: you still control Alto and his friends, soaring across the endless terrain, performing various stunts. Along the way, you need to collect coins, avoid various obstacles and complete tasks, which will allow you to go further through the levels and buy new features in in-app purchases.

In the second part, the environment became more interactive and detailed – balloons, birds, monkeys and much more appeared. As you progress, you will periodically meet with lemurs, who strive to push you off the board.

They move faster than Alto, so you will have to escape from them by performing various tricks and trying to gain speed. Cunning animals attack at the most inopportune moment, which adds tension and forces you to perform tricks that you would not normally dare to do. Such nuances completely change the perception of the game, even if for a few minutes.

If you liked Alto’s Adventure, then the second part will certainly be to your taste. Alto’s Odyssey is a decent game in and of itself. It does not rely too much on the original and is suitable for beginners who are not familiar with the Alto universe.

Alto’s Odyssey is available in the App Store at a price of 499 rubles. The game is compatible with iPhone, iPad and iPod touch running iOS 10. There is support for Mac and Apple TV, as well as localization into Russian.