Reigns: Her Majesty – the continuation of the successful game Reigns, where you could decide destinies and balance competing forces (church, people, army and treasury) by simply swiping your finger across the screen.

In the original game, every decision you made (with a few exceptions) could bring the favor of one of the forces, but at the same time lower your status in the eyes of others. One of the tricks was that you need to be guided by your intuition in making every decision in order to maintain balance. For example, if you allow a doctor to heal your subjects, it will gain the approval of the people, but at the same time it will lead to censure from the church, which condemns medical science. The whole game continues in the same spirit until you inevitably meet your death. Then the whole process will start all over again, as you are cursed and doomed to return as the new king again and again, at least until you find a way to remove the curse.

The gameplay of Reigns is so simple that absolutely everyone can play the game, both those who have never played before, and hardcore gamers. One of the main problems with the first part of Reigns was that the ending of the game left much to be desired and when the developers announced the sequel, many fans were eagerly awaiting the sequel. And then they waited. 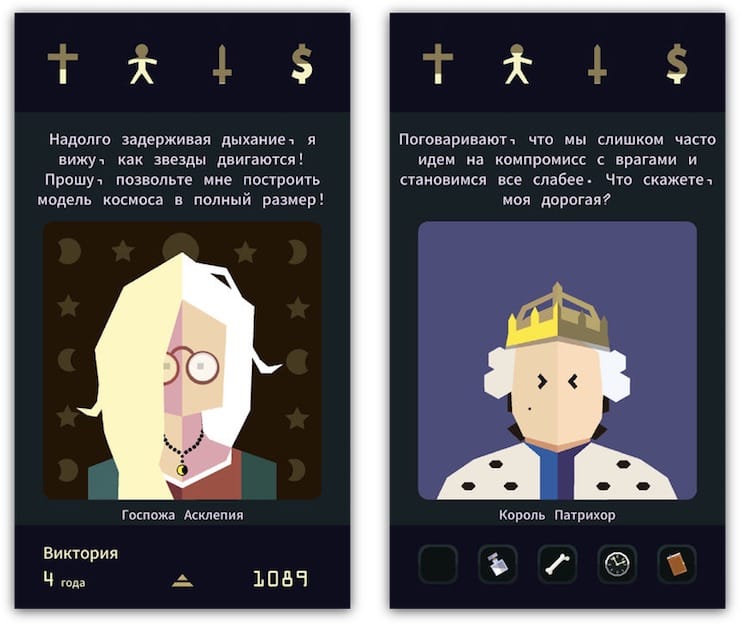 Reigns: Her Majesty is not just a sequel, but an evolution of the original. As the name suggests, you will be playing as the queen. From time to time, she still has to deal with a slightly dumb king, but this only adds new emotional dynamics to the game. Your royal decrees and the unpredictable requests of your subjects affect both the time spent on the throne and the future of your dynasty. Therefore, you will have to carefully weigh the pros and cons before fulfilling the not always reasonable political demands and emotional petitions of the eccentric inhabitants of the kingdom, so as not to upset the balance of the most powerful forces in the country.

In the second part, a new subject system has appeared, adding zest to the game. You will have to loot items that can be applied to certain character cards that offer additional options instead of swipes to the right or left. 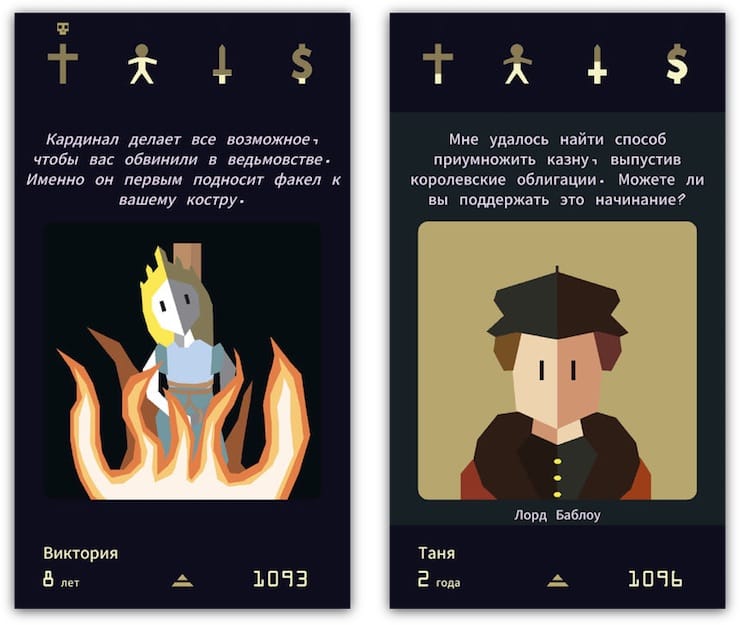 The developers have also added a new subsystem in the form of a kind of zodiacal calendar. With each death of your zodiac sign progresses. Unlike the original Reigns, where the “good” ending required certain actions in certain years, in Her Majesty it is tied to the zodiacs. Thanks to this system, solving puzzles has become more difficult, as you will have to meet certain people and use certain items under a certain zodiac sign.

As you meet new people and events, more cards will be added to the deck. It works like a kind of instruction. Until you figure out how objects and the system of the zodiacs work, you will go through a relatively small set of the same cards.

We will not reveal all the secrets in this review, because it is the discoveries that make the Reigns games so exciting, and Her Majesty is a mine of secrets that delight you from the beginning of the game to the end of it. The original Reigns was a game that is not ashamed to recommend to a friend, Her Majesty continued that tradition.

Reigns: Her Majesty Is a great sequel that not only surpasses the original, but does it in a very subtle way. If you are not familiar with the Reigns series, do not pass by the first part, although the gameplay in both games is very similar, each of them is unique in its own way.

Reigns: Her Majesty is available in the App Store for 299 rubles. The game is compatible with iPhone, iPad or iPod touch running iOS 9.0 or later. There is localization into Russian and support for Apple TV.