Traditionally, in September, Apple updates its smartwatch lineup. In 2021, the Apple Watch Series 7 was introduced, which received an enlarged screen. And its predecessor, Apple Watch Series 6, disappeared from sale on the official website. However, this model will still not be difficult to find from authorized resellers. 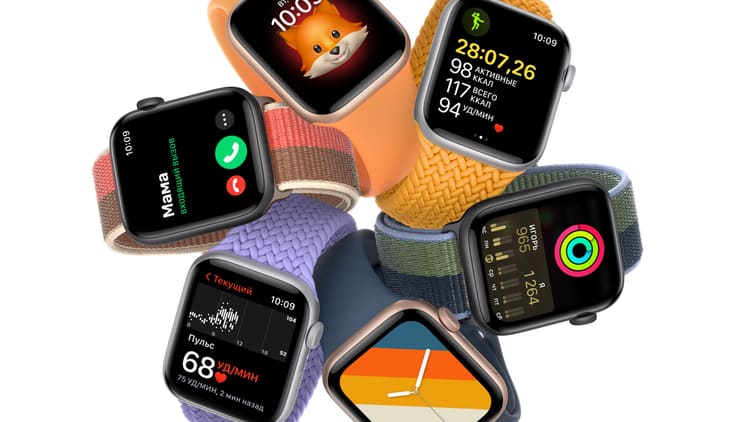 ♥ BY THEME: Calibrating Apple Watch: what is it for and how to do it?

But the manufacturer also offers for sale the Apple Watch SE, which can hardly be called outdated – the model appeared only in 2020. It turns out that a potential buyer is faced with the need to choose one of three fairly fresh devices. 2020 models are cheaper, which is justified by their functionality. Let’s compare the three most recent watch models released by Apple, finding similarities and differences.

Outwardly, the watches look almost identical – all these models are made in the same design. The front side is almost entirely occupied by the screen. The corners and edges of the device are rounded. On the top of the right side is the Digital Crown, and below is the power button.

In Russia, only models with an aluminum body are officially sold. But with a direct comparison, you can determine the Apple Watch Series 7, this model has clearly smaller bezels around the screen… 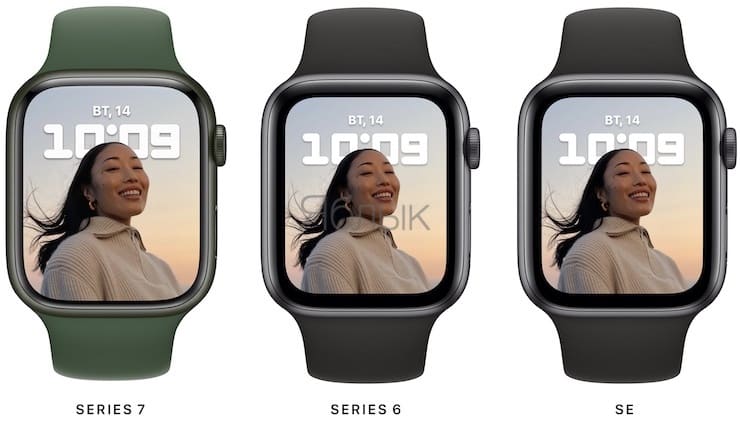 The main external visible differences can only be color options: 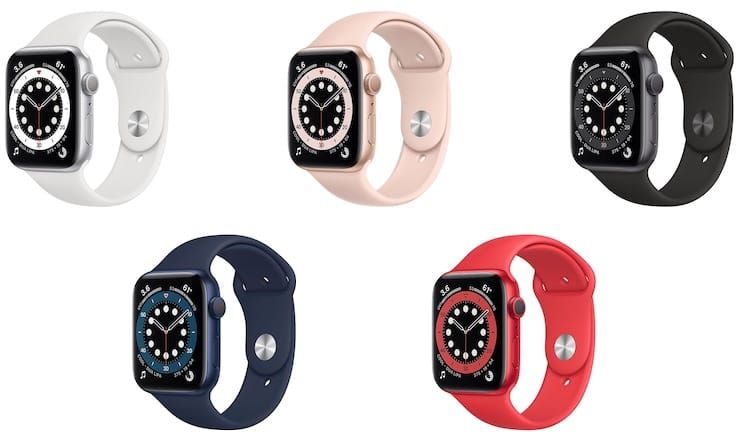 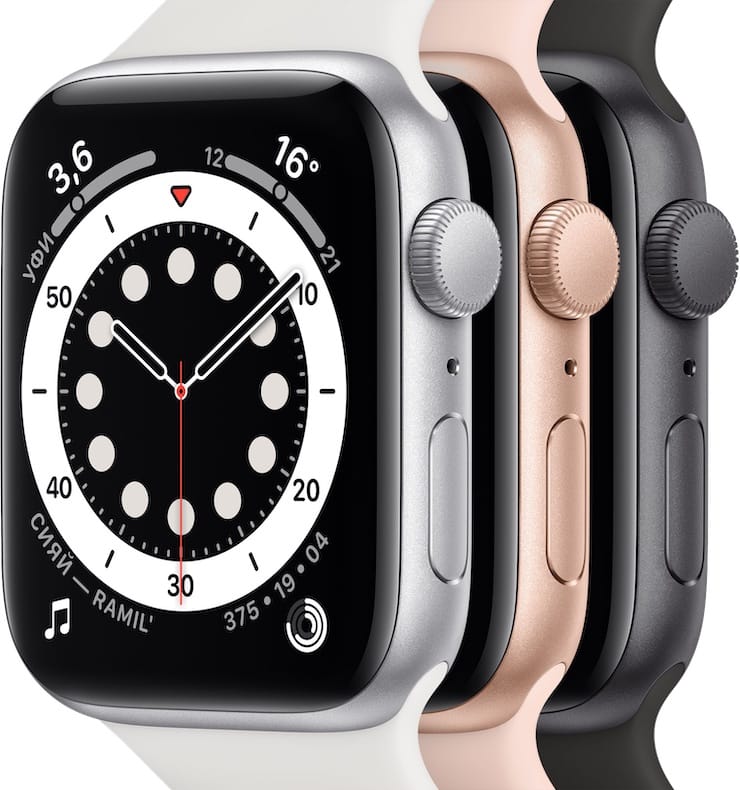 Outcome: Outwardly, the watches are almost identical, however, the flagship models offer a wide range of colors, including the corporate red. But Apple Watch SE offers only three color options. If you want your watch to stand out in a custom coloration, then look at the Apple Watch Series 6 (blue) or the newer Apple Watch Series 7 (blue or green).

♥ BY THEME: How to disable autoplay of the player (Now Playing screen) on Apple Watch. 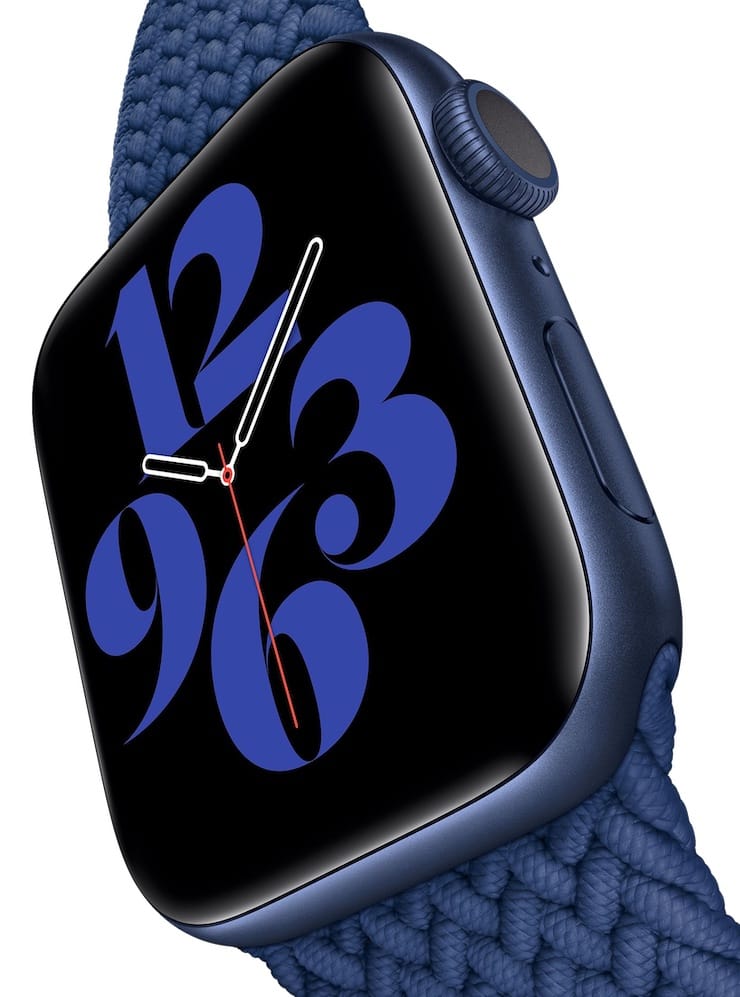 All three models feature a fairly modern OLED LTPO Retina display with a brightness of 1000 cd / m22… But at the same time, Apple Watch SE lacks an important function – Always-On (always-on display). In other words, the two older models can always be turned on, showing the current time even without moving your hand. It is very convenient and practically does not affect the autonomy. On watches with Always-On, you can access the Notification Center or Control Center, read notifications even without waking the watch from sleep mode. 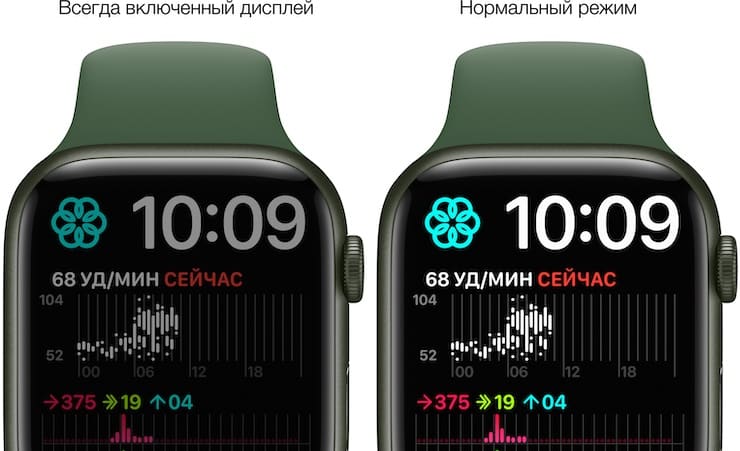 Outcome: Comparing the screens of the three models, the ranking is obvious. The simplest display is the Apple Watch SE. Apple Watch Series 6 has the same screen size and technology, but with an Always-On feature (always-on display). And in the new product of 2021, Apple Watch Series 7, the screen has also grown slightly due to the area and resolution.

♥ BY THEME: How to extend the life of an Apple Watch battery that is continuously charged overnight. 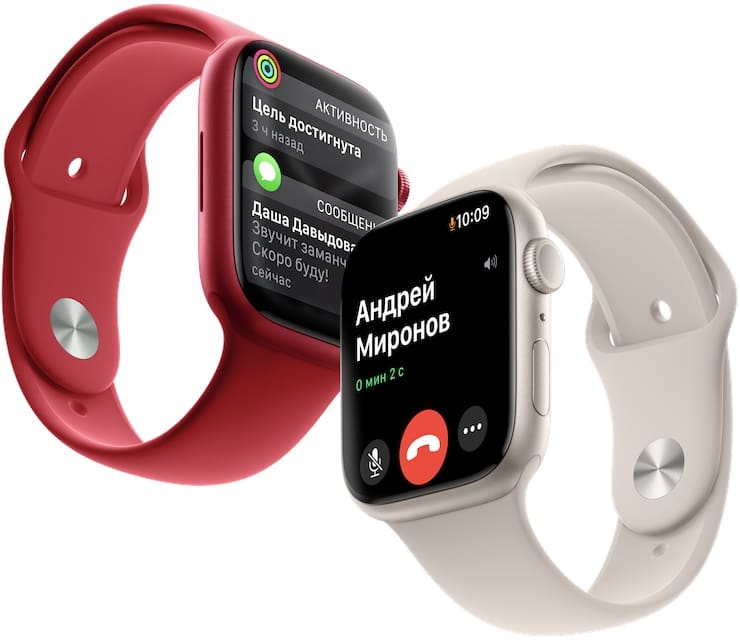 And in this case, the ranking is obvious: the Apple Watch SE runs a 64-bit 2-core S5 processor, the Apple Watch has a 64-bit 2-core S6 processor, and this year’s model already has a 64-bit 2-core S7 processor. … In 2020, the S6 processor was a significant breakthrough. It was built on the basis of the A13 Bionic, running in the iPhone 11. The advantage over the S5 reached 20%. And this despite the fact that he is still presented as very productive. But the S7 chip practically repeats the previous development, it is no coincidence Apple says nothing about performance change between Series 7 and Series 6… All three models have 32GB of storage and 1GB of RAM.

♥ BY THEME: How to turn on Power Saving Mode (Eco Mode) on Apple Watch.

Apple Watch Series 6 introduces a highly relevant blood oxygen monitoring feature. It has survived in Apple Watch Series 7. Now the user of the watch with the help of the Oxygen in the blood application can always evaluate how his lungs work. On the back of the device there are four clusters of green, red and infrared LEDs and four photodiodes, which are responsible for taking measurements. The oxygen level in the blood is the percentage of gas that red blood cells carry from the lungs throughout the body. The drop in the indicator is a classic symptom of the coronavirus, with which humanity has been actively fighting in recent years. The sensors measure the light reflected from the blood and, based on an intelligent algorithm, produce a score of 70 to 100 percent. A reading below 95% is considered alarming. Measurements can be taken both on demand and in the background, for example, during sleep. The general summary will be displayed in the Health app. But the Apple Watch SE does not have this important feature. 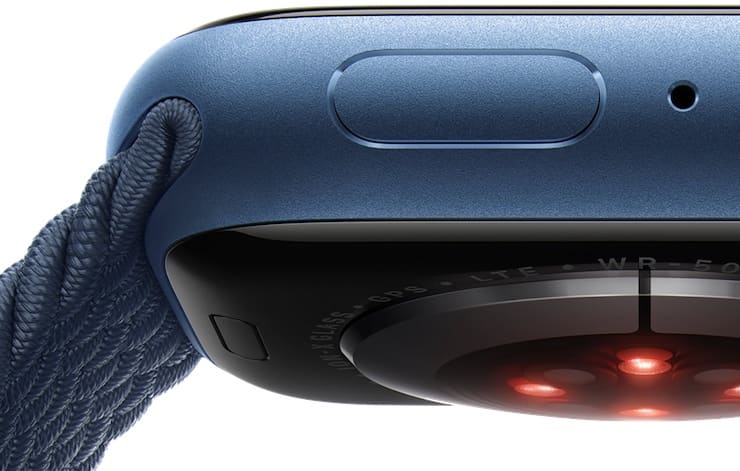 Also, the Apple Watch Series 6 and Apple Watch Series 7 models received an electrical heart rate sensor on the back of their panel, which can take an electrocardiogram. The electrodes located in the Digital Crown will help. The user only needs to touch it and after half a minute, information about the current work of the heart will appear on the watch screen. Smart algorithms will determine if it is beating normally or if there are signs of atrial fibrillation in the ECG. Of course, this information cannot be considered a serious diagnosis, but it can warn and force you to turn to specialists for a more detailed examination. In the “Health” application, you can find diagnoses related to the ECG measurement. 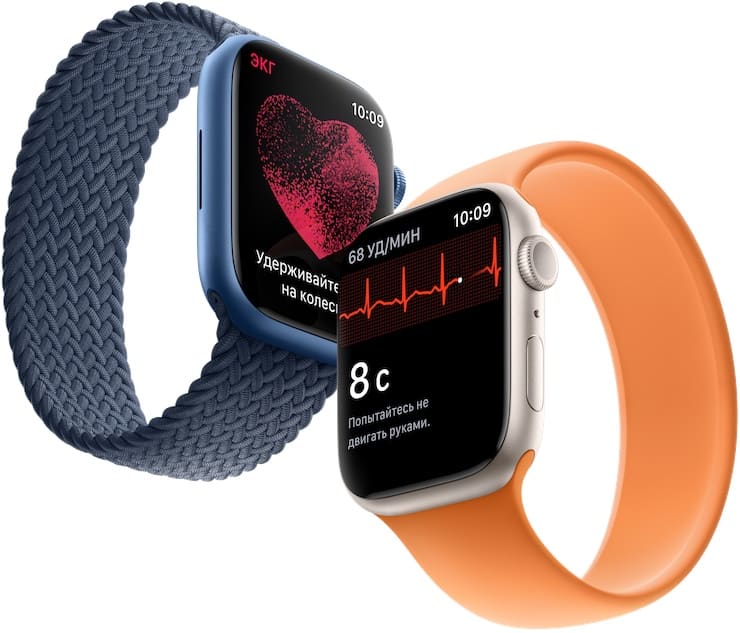 Initially, with the release of Apple Watch 6, the ECG measurement function in Russia did not work, but by the end of 2020 the restrictions were lifted. But Apple Watch SE can’t take ECGs…

Outcome: Obviously, the functions of measuring the level of oxygen in the blood and taking an ECG are very important for monitoring health (in fact, not all Apple Watch users use them). But they are available only in Apple Watch Series 6 and Apple Watch Series 7. Unfortunately, Apple Watch SE monitors health in a slightly simplified mode, using only a heart rate sensor (they measure the pulse and react to its changes). So if this monitoring functionality is important for you, then you should pay attention to just the basic models that have it.

♥ BY THEME: How to quickly calculate the total bill for all guests on Apple Watch and determine the tip.

Of course, the functions of a smartwatch are not limited to monitoring the health of the wearer. All these models have a built-in accelerometer, gyroscope, barometer, compass, always-on altimeter GPS / GLONASS, protection from water at depths of up to 50 meters, ambient light sensor, loud speaker, microphone, Bluetooth 5.0. 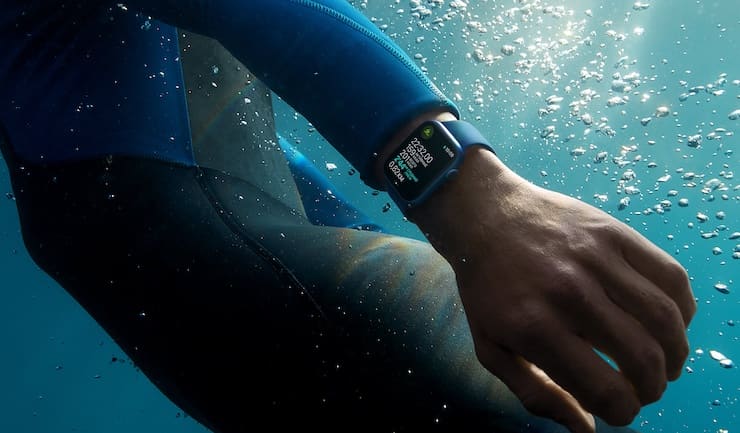 But Apple Watch Series 6 and Apple Watch Series 7 work better with wireless networks. These models support dual-band operation with Wi-Fi 802.1 b / g / n, while the Apple Watch SE only operates on 2.4 GHz. Also in these two models there is a U1 chip (not yet working in Russia), which will help when searching for things, it is not in the Watch SE. 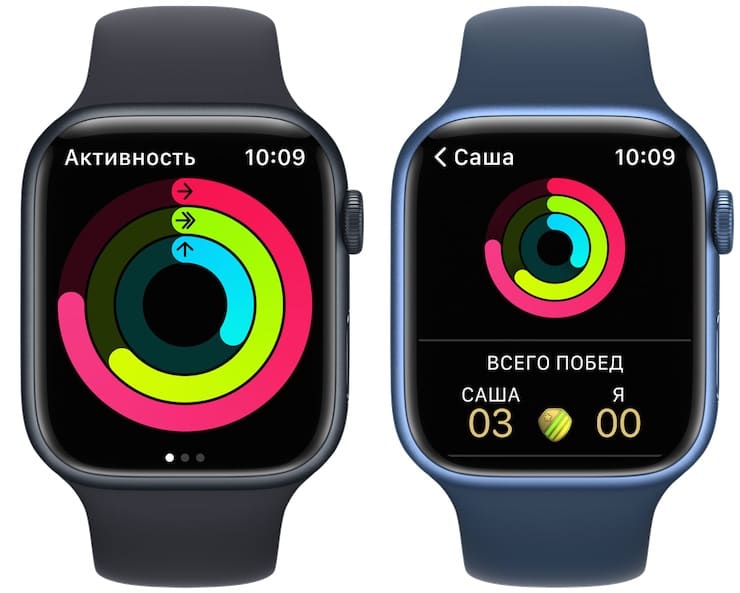 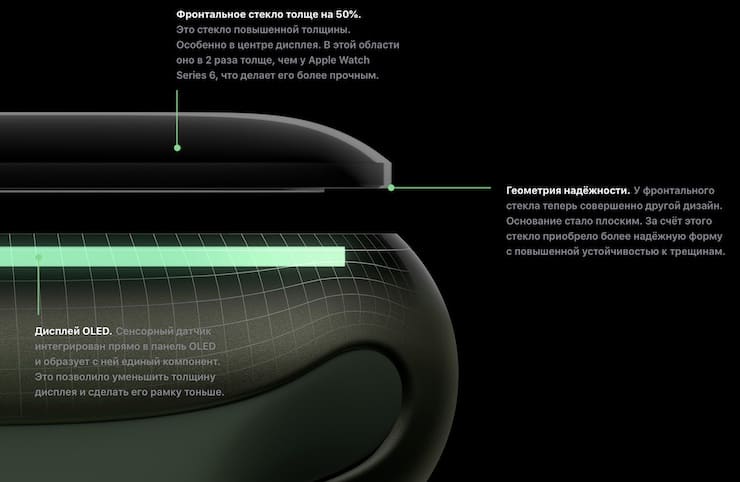 ♥ BY THEME: How to find an iPhone with the help of Apple Watch if it is lost in the dark. 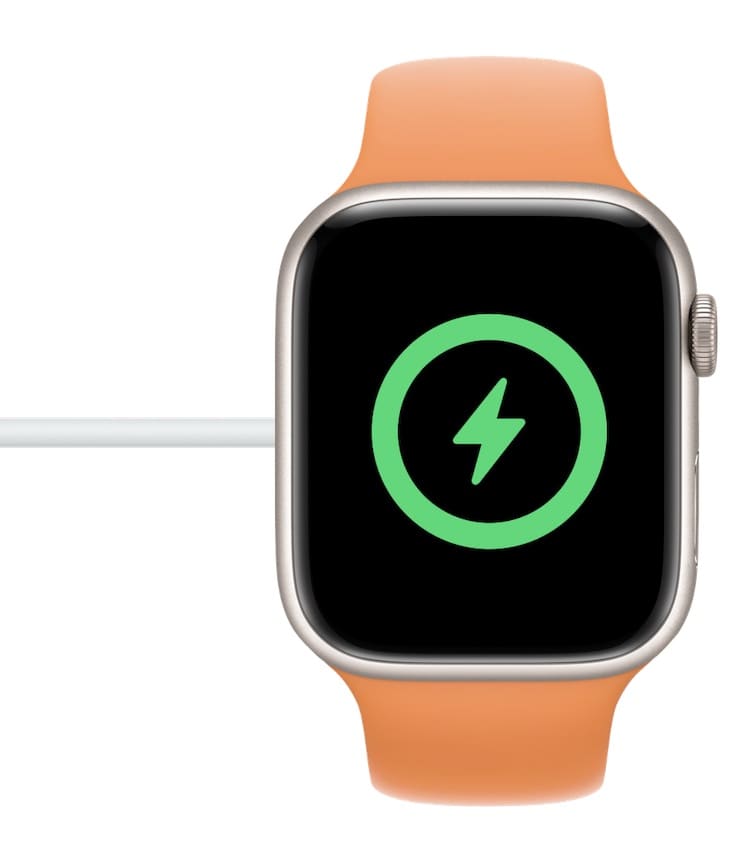 Apple prefers not to advertise the battery capacity of its devices, avoiding comparison with competitors. All three watch models are capable of providing all-day operation, which means that it is full daylight hours. The average battery life is about 18 hours, regardless of whether the watch has an Always-on mode.

Outcome: All devices have the same autonomy, there is no clear leader here. But Apple Watch Series 7 stands out for its faster charging capability, which is very relevant given the battery life of the devices.

♥ BY THEME: Is it possible to link multiple Apple Watch to one iPhone. 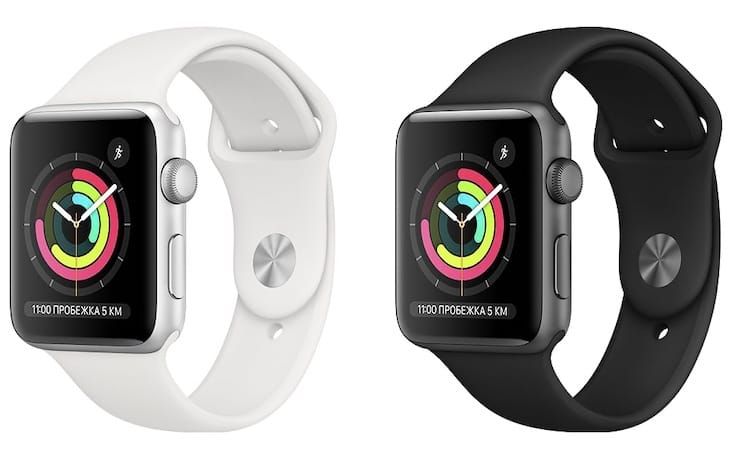 The current lineup also includes the Apple Watch Series 3. They represent the youngest available model. It costs much less than its more advanced counterparts – from 17,990 rubles. But this model can already be considered outdated – it does not have many functions, a relatively small screen. Nevertheless, Apple Watch Series 3 does an excellent job of implementing the basic functionality. The watch has 8 GB of memory, has excellent moisture protection, an altimeter, and can record the heartbeat. Functionally, this model resembles the stripped-down Apple Watch SE, only thicker and with larger bezels.

Consider Apple Watch 3 only as a cheap way to get into the ecosystem. After all, even the Apple Watch SE is already inferior to the 6 and 7 models in all respects. And with the release of the 2021 model, prices for 2020 models will have to come down. Today it is worth considering more modern options, which will be clearly longer supported by operating systems.

♥ BY THEME: 3 types of flashlights in Apple Watch: what they are for, how to turn them on and off.

♥ BY THEME: Apple Watch in the pool: detailed instructions for swimmers.

♥ BY THEME: How to see the time on Apple Watch in Night mode without touching the watch.

Apple on its website offers a choice of three watch models: Apple Watch Series 3, Apple Watch SE and Apple Watch Series 7. Ranking goes from the simplest and cheapest to the best and most functional. At the same time, do not forget that it will not be difficult to find Apple Watch 6 in retail. They are very close in their characteristics to the current flagship, and for the most part they repeat it. On the Apple Watch 7 side, there is perhaps a slightly larger screen, better scratch resistance (but still scratches) and fast charging.… Apple Watch SE is the best Apple watch in terms of value for money – worth considering if you don’t need advanced features like blood oxygen and ECG, always-on display. Otherwise, you should pay attention to the 6 and 7 series models, in addition, you can save money by purchasing the 2020 model.

See also  How to understand what is broken on your Mac. Turn on Apple Hardware Test