The creation of the M1 chip was an important starting point for Apple in its strategy of converging all products. This chip found its place both in the MacBook Air and in the much more functional, according to the idea, MacBook Pro. 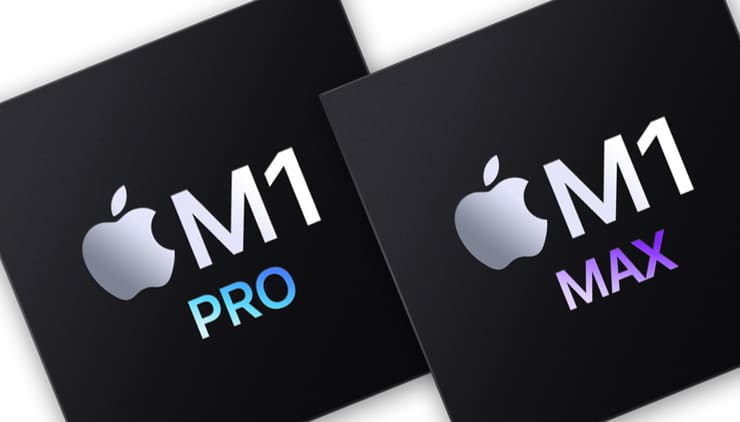 ♥ BY THEME: Chip binning, or why Intel, Apple and AMD release lines of weak processors.

On October 18, 2021, the company unveiled the M1 Pro and M1 Max, which are undoubtedly the most powerful chips of their own production. These solutions will power the 2021 MacBook Pro. The chips received a 10-core central processing unit, while the GPU has 16 or 32 cores. At the same time, there is support for a unified memory architecture up to 64 GB and dedicated graphics accelerators ProRes. And with all this, the chips are also very energy efficient.

The prerequisite for the emergence of new advanced Apple chips was, of course, the innovative architecture of the M1. Thanks to its scalability, it was possible to create a powerful and economical M1 Pro chip, as well as the M1 Max, which further developed these capabilities. As a result, the CPU in the M1 Pro and M1 Max computes 70% faster than the M1. This allows, for example, to speed up the compilation of projects in Xcode. In terms of graphics processing, the M1 Pro is twice as fast as the M1, and the M1 Max is 4 times faster than the base model. These features will be appreciated by professionals who actively work with heavy graphics packages.

The M1 Pro and M1 Max chips were the first single-chip solutions for Apple professional systems. The chips received fast combined memory, whose performance per watt is simply a record for the entire industry. It should be noted the increased throughput of the system, while also providing extremely high energy efficiency. As a result, the memory bandwidth of the M1 Pro reaches 200 GB / s, and the chip itself can work with 32 GB of combined memory. The M1 Max already has 400GB / s of memory bandwidth, six times the capacity of the base M1. In the maximum configuration, systems based on the M1 Max can work with 64 GB of pooled memory. And this despite the fact that in the graphics systems of other laptops there is no more than 16 GB of memory.

This architecture allows the M1 Pro and M1 Max chips to tackle the toughest tasks that laptops usually do poorly. Moreover, the chips perform equally well both when connected to the mains and when running on their own battery. These chips have a dedicated ProRes accelerator that specializes in video processing. All this allows us to call the chips M1 Pro and M1 Max not only the fastest ever created by Apple, but also much more powerful.

♥ BY THEME: How to display photos or videos from iPhone or iPad to TV – 4 ways.

M1 Pro. A chip with a new level of performance 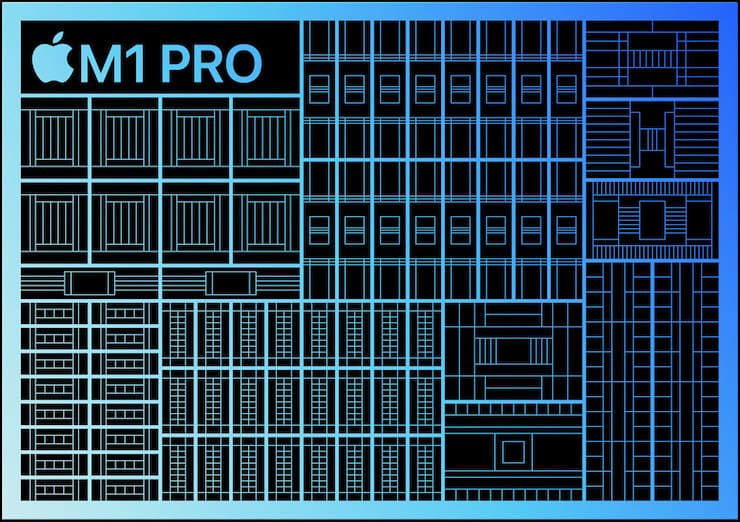 The new chip is based on the most advanced 5nm technology. It allowed 33.7 billion transistors to fit into the M1 Pro. This is more than double that of the M1. In the new system, the central processor received 10 cores, 8 of which are productive, and a couple more are energy efficient. The speed advantage of this bundle over M1 can reach 70%. In comparison with other solutions, the M1 Pro is 1.7 times faster than the latest 8-core processors in other notebooks with the same power consumption. It takes 70% less energy to achieve similar peak performance to competitors. M1 Pro easily solves the most difficult tasks, such as processing high-resolution photos.

The M1 GPU can be configured with up to 16 cores, which doubles the performance of the M1, and up to 7x faster than the integrated cards of current 8-core competitors’ notebooks. In addition to the increased performance, the M1 chip also consumes 70% less power in some cases. An important feature of the chip is fast combined memory of up to 32 GB and a bandwidth of up to 200 GB / s. People actively working with 3D graphics (3D artists, game designers) will get new opportunities. 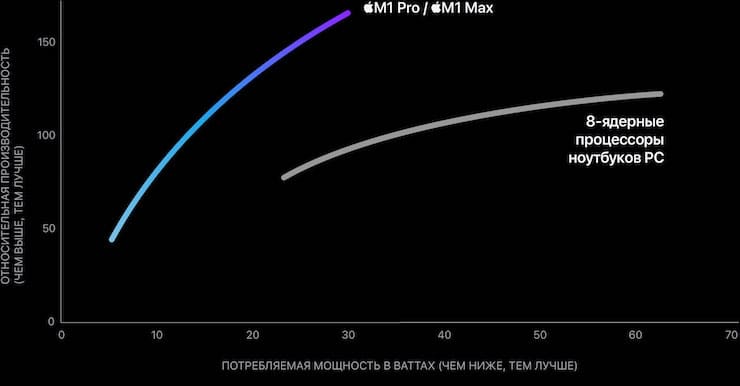 In this graph, you can see a comparison of the performance and power consumption of different CPUs. The superiority of the M1 Pro and M1 Max is beyond doubt.

♥ BY THEME: How to remove badges (red circles) of notifications on application icons on iPhone. 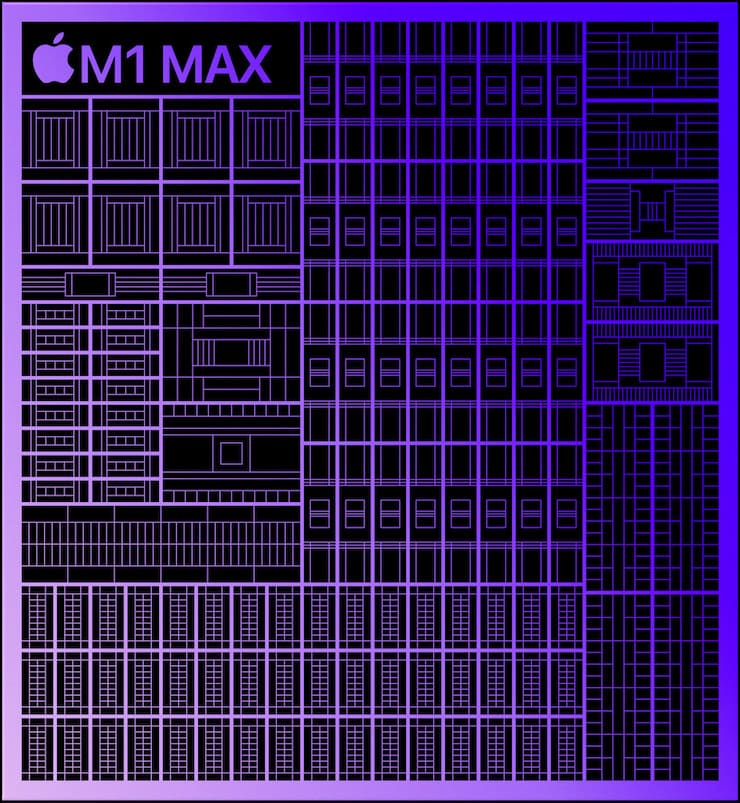 The M1 Max has the same powerful 10-core CPU as its younger sibling, the M1 Pro. And the main difference between them is in the 32-core graphics processor. It works with graphics 4 times faster than the base M1. The M1 Max chip contains 57 billion transistors, which is 70% more than the M1 Pro and 3.5 times more than the M1. This particular chip is the largest of all manufactured by Apple. The M1 Max GPU delivers performance comparable to the best discrete graphics chips in compact notebooks, while still consuming 40% of the power from Apple.

Compared to the newest GPUs in large notebooks, the power savings can be as high as 100W for comparable performance. In practice, this operating mode will immediately show itself as a reduced heat generation, which means a quieter operation of the fans. And the power efficiency of the graphics unit will clearly affect the autonomy. The M1 Max will revolutionize heavy-duty graphics work, with complex rendering in Final Cut up to 13x faster than the previous generation 13-inch MacBook Pro.

The M1 Max doubles the memory bandwidth of the M1 Pro, reaching 400 GB / s. M1 indicators are 6 times lower. This interface allowed for up to 64 GB of fast concatenated memory. The results demonstrated by the M1 Max give reason to call the chip the most powerful, created by Apple for its professional notebooks. 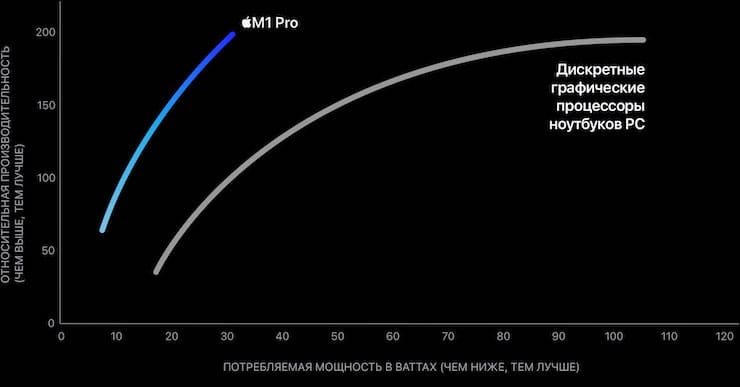 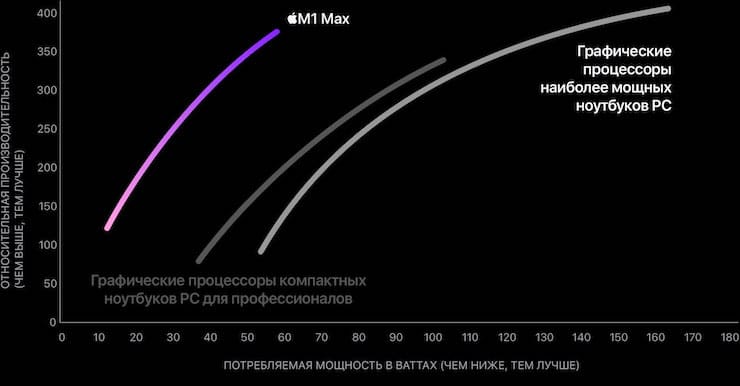 This graph shows that the 32 graphics cores M1 max show a level of performance comparable to discrete graphics solutions of other notebooks, but at the same time they consume much less power.

The Geekbench 5 database shows the results of testing the 2021 MacBook Pro powered by the Apple M1 Max chipset. The performance of the model scored 1749 points in the single-core test and 11,542 points in the multi-core test. 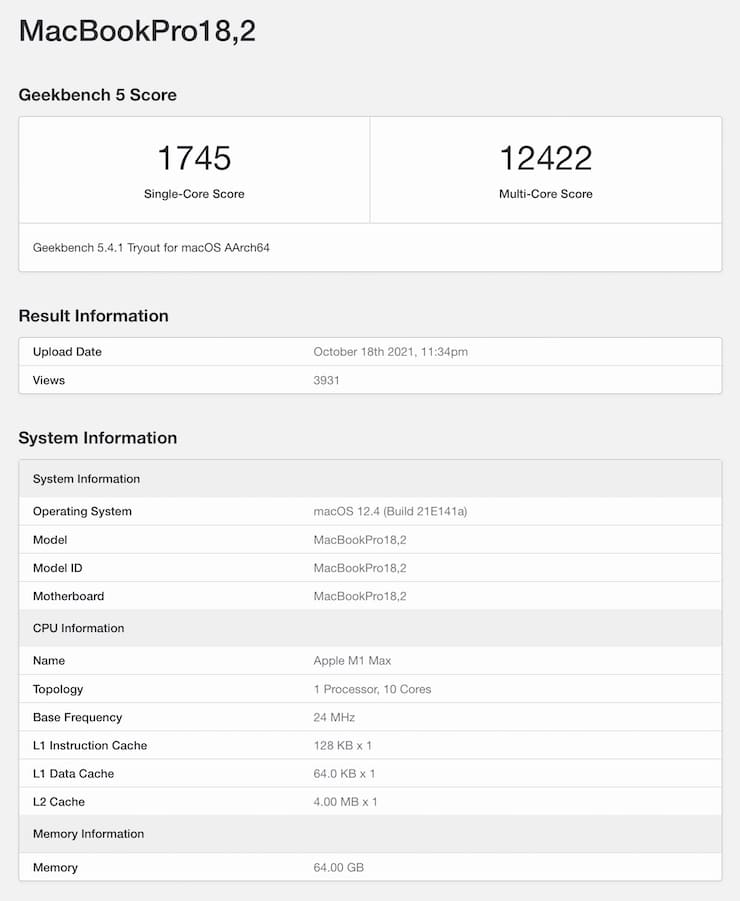 The first figure is almost identical to the results of last year’s and less powerful Apple M1, but in multi-core the closest analogue is Mac Pro (2019) on a 12-core Intel Xeon W-3235. The screenshots below show where the 2021 MacBook Pro with the Apple M1 Max chip is located. 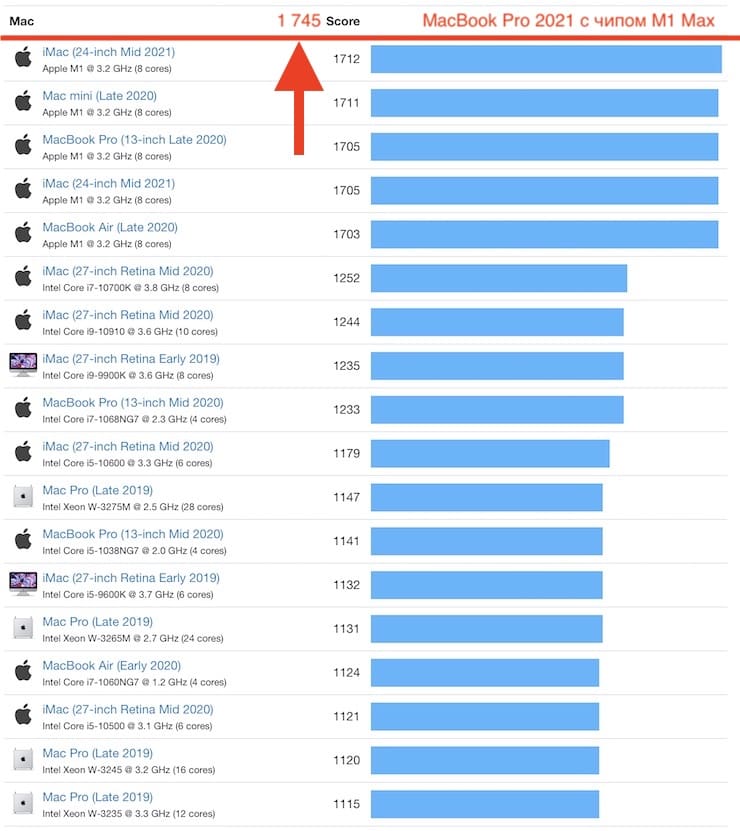 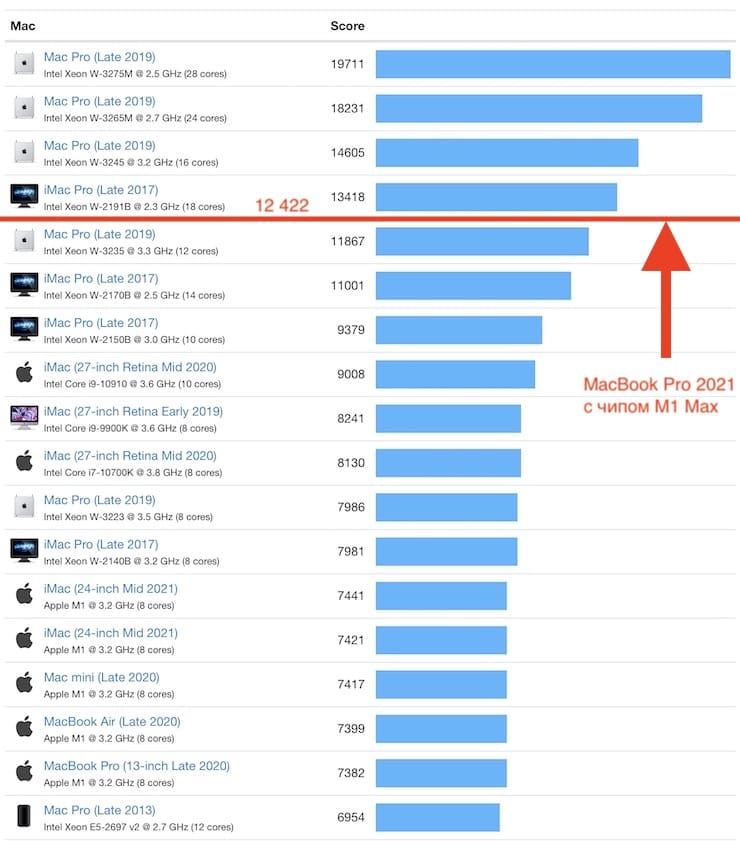 The M1 Pro M1 Max chips also have a special media processor created by Apple. It is responsible for video processing, which allows more efficient use of battery power. M1 Pro has a dedicated hardware accelerator for the professional ProRes codec, which allows it to be played in multiple streams in 4K and 8K resolution, but at the same time consuming a little power. The M1 Max chip demonstrates even greater efficiency. He is able to encode video twice as fast as his brother due to the use of two Pro Res accelerators at once. As a result, the new MacBook Pro with M1 Max can handle ProRes video up to 10 times faster than the previous generation 16-inch MacBook Pro.

♥ BY THEME: How to change default folder icons to emoji emoticons in macOS.

The best technology for a complex professional system

Apple has incorporated its most advanced technologies into the M1 Pro and M1 Max chips, and thanks to this, professional systems have reached a new level of capabilities. Here’s what we’re talking about:

♥ BY THEME: How to teach iPhone to automatically turn on Power Saving Mode.

An important stage in the full transition to branded Apple chips

Apple has planned to migrate its Macs to its own chips in 2 years. Half of the term has passed since then. The release of such performance solutions as the M1 Pro and M1 Max can be considered a big and important step forward. These feature-rich chips are now the most powerful Apple has ever made. And together with the M1, a new line of processors is being formed, solely on the basis of their own developments. All representatives of the series are distinguished by high performance and at the same time excellent energy efficiency.

♥ BY THEME: Ringtone (melody) on iPhone: how to make and install using a computer.

MacOS Monterey was designed with the capabilities of the M1 processor family in mind to deliver superior performance while being economical. Thanks to the close connection of Apple’s software and hardware platforms, Mac computers can instantly wake up from sleep, and the system itself responds with lightning speed to user actions. New technologies such as Metal take advantage of the power of Apple’s chips, and the optimization features in Core ML directly access the Neural Engine to accelerate machine learning. The operating system collects information about the operation of applications, optimizing the load between the processor cores in order to achieve maximum efficiency. Intelligent power management algorithms distribute tasks between high performing and efficient cores, which gives both high results and saves battery power.

See also  Comparison of MacBook Air 2020 and Macbook Pro 2020: which is better to choose and buy?

The macOS and M1 series processor bundle provides a high level of security through hardware boot verification and fast file encryption. Apple’s Mac apps are perfectly optimized to work with the new M1 chips and run smoothly. More than 10 thousand such universal programs and plug-ins have already been written. And those Mac applications that have not yet received universal status will still work stably using Apple’s proprietary Rosetta 2 technology. Also, macOS users can run applications created for the iPhone or iPad on their device, which provides additional interesting opportunities.