I came across an interesting topic in the English-language reddit. The people gathered an armful little facts about how Apple stores and their “backstage” are arranged.

While we in Russia did not even wait for one full-fledged Apple Store, perhaps the closest store to him was a store in the Moscow Central Department Store. But if you were in any overseas Apple Store (for example, here is German in 2018), then obviously you asked yourself a couple of questions from the list below. Maybe below you will find answers to them.

The only moment: there are no proofs for most statements, alas.

1. There are no cables on the tables, because they are laid through the tables themselves. Under this provided cavity in the legs.

2. Stands with branded cases for the iPhone are in fact shelves. Each comes forward.

3. Tables in stores are made of trees (European white oak), felled in one region and at certain times of the year, so that in the end they look the same in color and texture. By the way, Apple bought the whole forest with these trees. 4. The tiles on the floor of all the Apple Store are the same because they are mined in the same quarry bought by Apple specifically for this purpose. The mining is carried out by Il Casone near Florence in Italy.

5. Each tile on the floor is marked: the date and a fragment of the stone from which it was produced are marked. This is done so that in case of damage, quickly replace this section with the most similar in color and pattern.

6. A program is installed on all iPhones in the store, which automatically “bricks” (blocks) the device if it is taken out of the store. This appeared in the days of the iPhone 6s as a measure against the growing frequency of shoplifting and significantly helped to reduce the interest of thieves. 7. Each table in the store costs from 10 to 80 thousand dollars, depending on the size and internal equipment. The most expensive tables are demonstration stands with Apple Watch. To change something inside the central, glazed part, employees must first wear gloves.

8. The tilt angle for each display in the store is strictly regulated. Every night, store employees check according to the schedule all the screens of the MacBook and any monitors.

9. The location of each device on the table is approved by Apple headquarters up to a distance in millimeters from each corner of the table, other devices and objects. 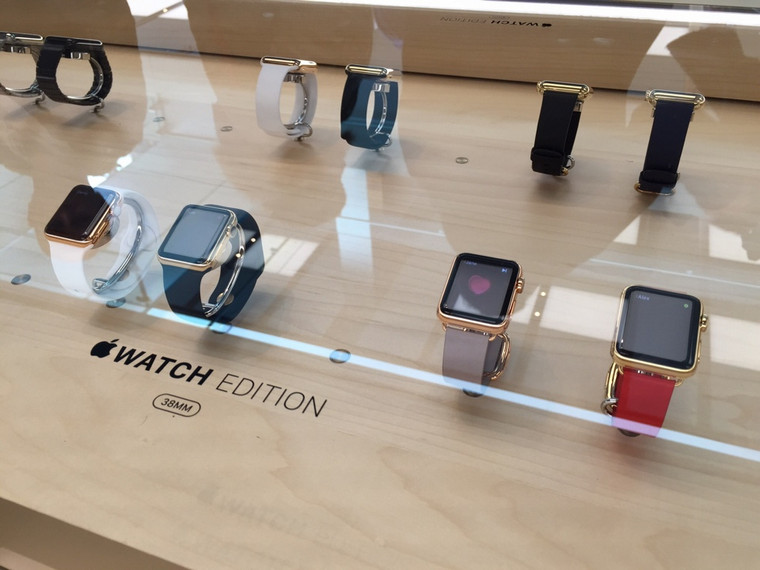 10. All the very first-generation gold Apple Watch Editions exhibited at demo booths in 2015 were a bit fake. In fact, their bodies were machined from steel and covered with gilding. This is one of the measures against theft.

eleven. Cash desks are built into some tables, which are activated and opened remotely at the request of store employees.

12. Glass doors and store walls withstand hurricane winds. The average weight of each such panel is about 1800 kilograms. Every year, at least 5 people accidentally crash into each glass door or wall, mostly children.

thirteen. Laptops and keyboards on Mac desktops are aligned exactly parallel to the end of the first wooden plank in the table on which they stand.

14. In the iPad, which demonstrate the prices and characteristics of devices on the tables, a secret unlock gesture is “wired”, which allows you to access the desktop and tablet settings.

fifteen. On the same iPad with price tags, all the data for display is downloaded from a remote server. Employees only entered the store address and the exact position of the iPad in relation to the table, and the tablet itself further understood what exactly to show him on the screen.

16. Wooden tables are sanded and cleaned every quarter, and a maintenance calendar has been set up for each. 17. Trees in the Apple Store are Japanese maple. Each tree is fundamentally imported from Japan.

18. All employees know the location of the secret metal panel in the wall where the fire extinguishers are hidden.

19. Many stores are guarded by unmarked guards. They are dressed in ordinary clothes and just walk around the store, mixing with customers and looking after them.

20. Most of the wooden furniture for both Apple stores and the Cupertino campus is produced by one company, the Fetzer Architectural Woodwork & Millwork Company from the United States. But they are only responsible for manufacturing, not design. Part of the tables for the updated campus was also put by a Dutch company Arco.